My sister-and-law, Emily (yes, I have a sister-in-law who shares my name; we both totally rock it) and her best friend, Molly, visited us last week. As always when Emi is in town, we had an amazing time, laughing more often than should probably be legal; Molly’s joining her only added to the general merriment and hilarity.

Due to the extreme heatwave that so much of the country has been experiencing (and also because I am all for supporting our daughters’ cultural betterment), we all agreed that the best option for afternoon fun would be taking the girls to see Despicable Me 2.

They’d eschewed dessert in order to partake in the kiddie movie snack box (some popcorn, an appropriately sized drink, and some fruit snacks), and as Emi and I made our way to the seats while balancing both snack boxes, another popcorn tub, three additional beverages, and three boxes of candy, I muttered to her that we should take bets on who would be the first person to spill.

Because it was a Monday afternoon, a 2:20 showing, I’d assumed that the theater would be relatively empty – but, shockingly, we weren’t the only people who’d thought that sitting in quiet, un-sunny, below-100-degree, air-conditioned splendor was a good idea.

Crowded theater but no one in front of us. Score!

We settled in, shuffling seats only once and going to the bathroom only twice (yay, us!) before the showing began. As the final preview flickered, and after tearing away at the packaging like a foraging squirrel, Annie asked if I could help open her fruit snacks. Seeking to quiet the rustling, I quickly reached over to take the bag from her… and promptly spilled my popcorn all over the floor. Before the movie even began. I WIN.

Seeing kid movies is always an excellent experience, because kids don’t hesitate to say what they think – during the movie, and loudly. Nick and I still talk about the time years ago when we went to see Shrek, pre-parenthood, and as we were leaving the theater, a father was admonishing his maybe three year-old son, “Just because you don’t think something is funny doesn’t mean you have to call out ‘That’s not funny!’ every time.”

This showing did not disappoint. There were shouts of, “Don’t do it!” and giggles loud enough to shake the seats. At one point, as the heroes were confronted by an enemy… chicken… one child yelled with disapproval, “What??! It’s a chicken???” It was right around then that Molly shifted slightly in her seat… and spilled her popcorn. Alas, having done so after me, she could not claim victory, but it was a valiant effort nonetheless. 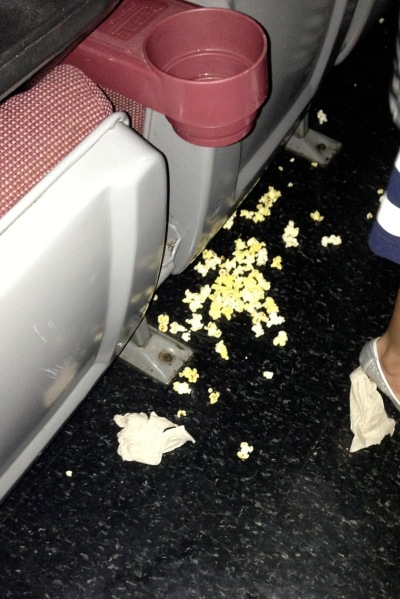 We picked up as much as we could, but still… After us, the ushers could definitely use a raise.

I was very much enjoying myself, chuckling at what a cute movie it was, what delightful culture we were soaking up when, minutes before the end, one of the main characters surprised me and I found myself tearing up. Eyes welling with tears! At Despicable Me 2! Not cool, Universal Studios. Thankfully, the one- and two-eyed minions broke the mood by launching into a wordless version of “YMCA” and so I was spared the embarrassment of the tears actually falling. Not that it’s unusual for me to cry at animated movies, but I do try to save myself for Up, where I’m guaranteed to dissolve into a puddle at least three separate times.

After the show, we needed to run to the grocery store, which normally would have elicited angry protests from my girls, but was instead met with gleeful cheers because air conditioning. It wasn’t until we were already inside the store that I noticed Annie was wearing elbow-length white gloves.

What? Isn’t this what you typically throw on to visit the grocery store?
Note also: Ella’s first-ever successful bunny ears. We teach maturity early.

Because of the heat, I’d elected to wear a light, sleeveless dress, and everyone else had followed suit. Apparently, Annie thought it necessary to complete her look with some costume gloves from the playroom. At first, she simply swirled around the flower section, deliberately making “glamorous” poses. But as we finished our shopping, she ran ahead a little bit… and we rounded the corner to find her like this:

It’s not at all embarrassing to discover your child posing in white gloves on stacks of toilet paper.

Ah, well. You can never have too much culture.
And, if all else fails, she’ll have a lovely future as a toilet paper model.

Ladies who lunch. Or, in this case, ladies who spill popcorn and pose on packages of bath tissue. But not at the same time… yet.