Despite the fact that “Annie” ended weeks ago, not a day has gone by when Ella and Annie haven’t sung one of the songs, acted out scenes from the show, or – when I’ve asked them to clean their rooms or maybe clear a single dish – referred to me as Miss Hannigan. This play-acting has been especially rampant when they have friends over, with their wardrobes being pored over to find the perfect “orphan” dresses and full musical productions being put on in every room of the house.

Last Friday was no different. They’d invited a friend over for a movie day (which had been strategically timed to coincide with the day I’d set aside for near-constant birthday party preparations), but only got about twenty minutes into “Annie” before the pause button was hit and they’d hidden away in Annabelle’s bedroom, rehearsing the opening of the show line by line. By line. By line. By every. Single. Word. For. Word. Line.

After a good two hours’ worth of rehearsals (which was a goldmine as far as birthday preparations were concerned; hooray for uninvolved parenting!), they invited me upstairs for a “performance.”

I’m just now realizing that the tape used to hold these signs is medical tape, which they’d been expressly forbidden to use for anything except, like, medical stuff. Awesome.

The production was fairly elaborate, with multiple roles for each girl, two musical numbers, and carefully choreographed dance scenes. The highlight of the show was the finale of “It’s a Hard Knock Life,” which featured the three of them somersaulting, in time, off of Annie’s bed and onto the “orphan bedding” (aka piles of blankets, sheets, and pillows) below. 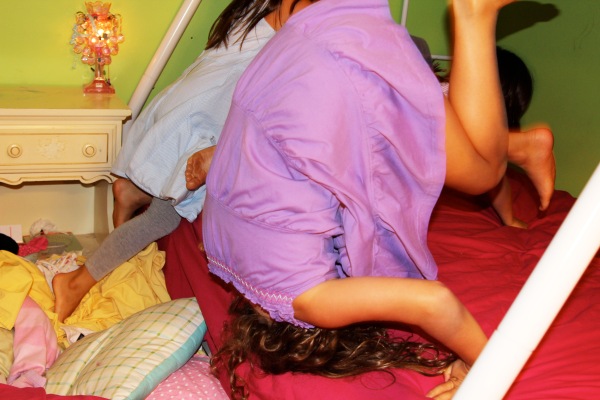 As they scrambled about, calling simultaneously upon their inner Gabby Douglases and their Little Orphan Annies, I happened to notice, amongst the chaos, a package of birth control pills under Annie’s bedside table.

Perhaps I should clarify: this is not “a” package of birth control pills but my package of birth control pills. And before it gets all weird and TMI-ish, I will tell you that, although we are absolutely done having children, I take them to help control endometriosis, rather than as pregnancy prevention. If I ever become pregnant again, Nick will be seeking a lawyer, if you know what I mean. Okay, now it’s become all weird and TMI.

It might have been prudent for me to, I don’t know, pick up the pills or hide them away or maybe talk to Annie about not playing with medicine, but honestly, the only thought that went through my head was, “Huh. So Annie’s got birth control pills under her bedside table. Keepin’ it classy.” I assumed it was an old, empty package — only the outer blue sleeve, not any actual pills — and chalked it up as just one of the many odd and inappropriate items that Annie’s got squirreled away in her bedroom (this very morning, I found a pair of scissors in her sheets).

The following night, after Nick and I had collapsed following Saturday’s birthday party, I vaguely registered that the girls were playing upstairs, but was so grateful that they were playing nicely and independently, I didn’t care if they were boring holes in the walls or tying sheets together to shimmy out the window (has anyone actually done this?). Perhaps I should have, however, because – several hours after bedtime – just as I’d exited Annie’s room after placing a kiss on her cherubic cheeks, something in the guest room caught my eye. So I stopped in… and found this: 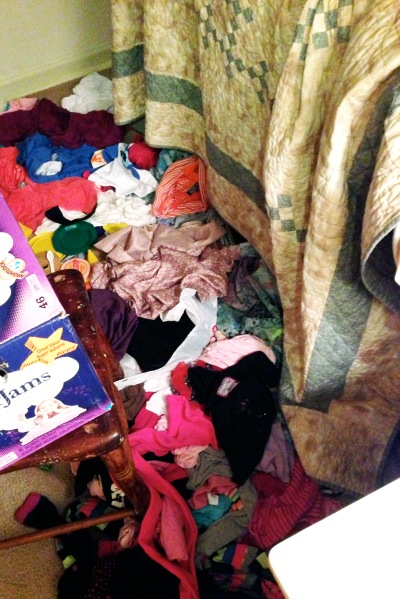 Why, yes, that is the entire contents of two of Annie’s dresser drawers, piled in a jumbled heap on the floor by the guest bed.

It seems that Friday’s “performance” had inspired them, and they’d decided to create an entire doll orphanage, with – naturally – piles of clothing on the floor to better simulate the orphan experience. After an exceptionally long day filled with birthday party festivities and general exhaustion, I can’t even begin to tell you how delightful it was to discover this little surprise. I actually contemplated pulling a Miss Hannigan right there and then and hauling their butts out of bed – at nearly midnight – to clean that dump until it shone like the top of the Chrysler building, but I decided that doing so might require a visit from CPS. And also, the girls don’t really know what the Chrysler building is.

To my even greater delight, it turns out this wasn’t the only surprise awaiting me. As I reached over to turn off the light on the bedside table, I ran into this little crime scene: 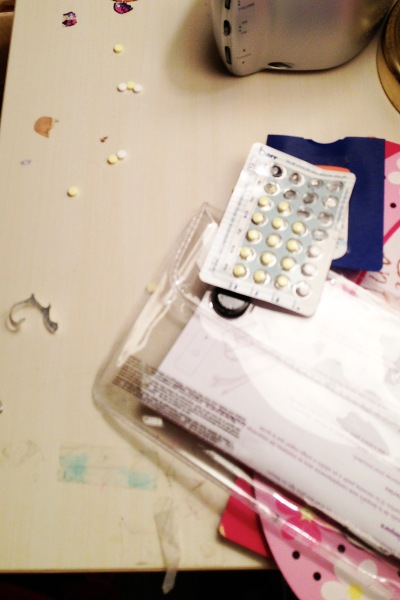 Guess that birth control package wasn’t so empty after all. Surprise!!

Turns out, somehow, my brand new pack of birth control pills had fallen into the garbage, where Annie had found it and assumed that I didn’t want them anymore. While I can follow that logic, I’m a little more stumped as to why she thought it would be a good idea to push the pills out of their foil packaging and all over the bedside table. Hey, y’all, six year-old logic is wacky.

So… not only did we have to have a talk about how it is never, ever okay to play with medicine, not even medicine that is in the trash and comes in adorably fun pop-o-matic packaging, but I also now have the super-fun task of attempting to put the pills back in the correct order, lest I wind up totally stomach-achy all month. Awesome! I love puzzles!
(But don’t worry, I can’t get knocked up, because Nick… Okay, okay. TMI. Moving on.)

The girls may be the ones performing “Hard Knock Life,” but I can assure you that, in this case, ‘steada treated, I was definitely the one who was tricked.