One of the hardest parts of summer is the lack of opportunities to actually accomplish anything. While I enjoy the myriad chances for fun that only summer seems to bring (boat rides at the lake, fresh veggies and fruits picked straight from our yard, water parks, consuming ungodly amounts of ice cream, drinking wine on the dock because wine and dock), I struggle balancing those experiences with the usual, run-of-the-mill chores (and even maybe occasional moments to myself that don’t involve hiding in the bathroom with my iPhone).

It’s not so much that we’re having such a blast every minute, I don’t get around to the laundry… but more that Ella and Annie can reliably play well together for approximately twenty-three minutes. After that, one of them is a) bleeding b) trying to wrestle the stuffed Chihuahua she won at the amusement park out of the dog’s mouth c) on the floor complaining that she’s absolutely starving, despite having eaten just an hour ago, or d) all of the above. Everyday life stuff is just really hard to accomplish in twenty-three minute bursts.

This includes exercise. During the school year, I have a pretty predictable exercise routine that fits in nicely between school and piano. In the summer, I have to cobble together whatever I can – which, recently, has meant sometimes getting up before Nick heads to work and going for a short run or a bike ride.

This is absolutely not how I pictured myself, and not something that I ever wanted – but sometimes life doesn’t go just the way you planned to, no? About a year ago, I accidentally became one of those people who actually crave exercise. No one is more horrified by this than I am. Although, for years, I’ve worked out enough to be healthy, it was never something I wanted to do – it was something I needed to do if I wanted to continue regularly consuming Caramel Macchiatos and eating two desserts nightly.

Unexpectedly, I found an exercise class that I loved and somehow got hooked and something changed and insert some kind of scientific blah blah blah about metabolism and whatever and now, when I don’t exercise for a few days in a row, I start to feel all weird and skin-crawly (no, I don’t have lice. I checked). Whereas before I’d blow off working out at the slightest provocation (there’s a 5% chance of rain plus also it’s time to test the smoke alarms… Guess I can’t run today – bummer!), I now feel compelled to get out and do something, which is so annoying.

Let this be a warning to those of you who are considering starting to exercise.

That I have not only continued biking but come to actually enjoy it totally shocks me. I think a large part of this is due to my being able to carry on full monologues as I bike, something that’s difficult to do while running, awkward while doing Zumba, and impossible while swimming… but that’s neither here nor there.

When I set off on the bike last week, it was misting ever-so-slightly outside. The forecast called for rain later in the day, but the radar was clear, so I decided to go for the ride anyway, figuring I’d enjoy the cooling effects of the mist. About ten minutes into the route, I discovered a dirt trail leading off of road, and I opted to take it, hoping to find a new path that I could travel regularly. Shortly after turning onto the trail, I rode past some deer who didn’t even move as I coasted by. 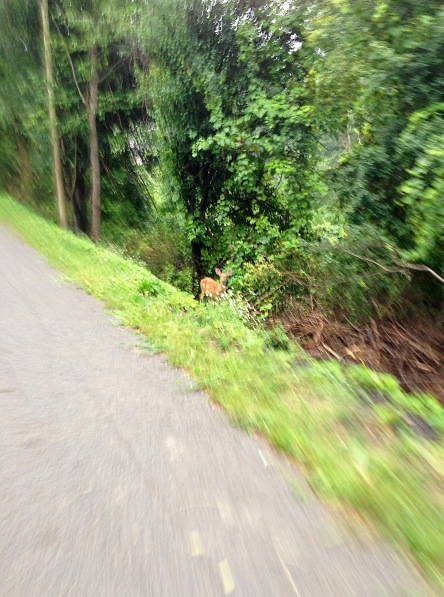 No, I didn’t process this photo to make it blurry; I just took it, you know, from a moving bike.
Also, passing fawns on my morning ride? Awesome.

I was still in my communing-with-nature fog when I noticed that the mist wasn’t really mist anymore, but actual drops of water. As in, rain. Within a few minutes, the rain changed from a drizzle to an outright downpour.

And it so happens that biking in the rain isn’t as romantic – or as easy – as it sounded in my head.

Taken from the driveway, where you can’t see my shrivel-y fingers, but trust me, they were.

Despite – nay, because of – my helmet, the water on my head would pool together into enormous blobs, eventually becoming so heavy that they’d plop right into my eyes. I’ve never been great at administering eye drops, so this constant assault caused me to frantically blink, which kinda makes it hard to see. I’d attempted to wipe the water with my hands, but a) they were also covered with water, so the point was moot, and b) the road was suddenly slippery, and I’m not exactly what you’d call a “steady” biker under ideal conditions, so letting go of the handle bars wasn’t exactly helpful.

By the time I arrived home, barely squeaking in before Nick absolutely had to leave to get to work on time, I was completely soaked through and my fingers were prune-y. I spent at least five minutes – and burned more calories than I had on the ride – trying peel myself out of my workout clothes (which aren’t exactly known for being, um, forgiving).

Sooo… perhaps I’m not cut out for this nature-communing bike ride stuff.

Yeah, the deer-spotting was really cool.
But maybe next time, I’ll change the smoke alarm batteries instead.