When Ella finished the first Harry Potter book, she swore she was done with the series. As a parent who is always spot-on with my analyses of my children’s decisions, I agreed that she was, indeed, finished for a while, having been thoroughly terrified by the ending of The Sorcerer’s Stone. (And, really, with the bad guy appearing as a tiny gremlin on the back of someone’s head, who could blame her?)

Which meant that, naturally, she’d come home the next day halfway through the first chapter of Harry Potter and the Chamber of Secrets, which she’d checked out from her school’s library. Because, apparently, she is every bit as hooked on Harry and the gang as Nick and I are. And also, apparently, because the two copies of the book we we have at home aren’t enough.

Whereas we’d read much of the first book together at home, she decided that it was somehow easier and less scary to read by herself at school. I was a bit dubious; book two is longer than the first, containing more complex sentence structures, nuances, and themes, and although Ella slogged through each chapter with little difficulty, I wasn’t sure how much she was truly understanding.

So I would occasionally quiz her (casually, you know, like we were just having normal Harry Potter conversation, ’cause isn’t that how everyone spends their evenings?) to see if she actually comprehended the plot. What is the Whomping Willow? Who’s been Petrified lately? Why do they care what’s in the Chamber of Secrets? Each time, her answers were totally good, so I finally just let it go, satisfied that she was well and truly getting it, and if not, she could always go back and re-read the book again. Or five times again. *ahem*

Although she understood the storyline just fine, her pronunciation of names and places was… interesting. (I ignored any mispronunciation of spells and magic words, because even I admit that I’m not 100% sure if Animagus has a soft or hard G. And yes, if you’re a Potter-file, you’ll know that Animagi don’t appear until the third book. It was just the first example off the top of my head. I am shamed.)

For one, she was completely bewildered when I read the chapter about the Heir of Slytherin. “Why do you keep saying AIR, Mommy? I don’t even know what that means!” Because, naturally, she had thought Hermione and the crew were researching the HAIR of Slytherin. Understandable. And quite damn funny.

Ginny Weasley was briefly “Guinea” Weasley, until Ella agreed that “Jinny” just sounded better. Poor house-elf Dobby, however, was so ingrained in Ella’s head as DOOBY that right until the final chapter, I could not convince her to change it.

As I read the last few pages aloud (she likes to read everything but the “scary stuff” by herself), I kept pronouncing Dobby’s name correctly, and Ella would admonish me, then I’d read it the “right” way again, and she’d grow agitated. As I sighed at her impertinence, she paused, then said, “You know, Mom, you’re not so perfect with this yourself.”

Before I could proclaim my Harry Potter genius, she continued, “You told me that you read this book to your fifth grade class, right?”

“And you’d never seen the name Hermione before…”

“… so you spent the ENTIRE BOOK calling her HERMY-OWN instead of HER-MY-OH-NEE.”

In my defense, this was back in 1999, well before the movies had come out. The internet was in its younger days and it never occurred to me to look for other Harry Potter fans or fan sites – I don’t know if any even existed – and most of my adult friends hadn’t read the book yet.

ALSO IN MY DEFENSE I cannot be the only person to have thought this because does everyone not remember how, in The Goblet of Fire, Hermione goes to the Yule Ball with Viktor and there is this exchange:

Hermione was now teaching Krum to say her name properly; he kept calling her “Hermy-own.”

“Her-my-oh-nee,” she said slowly and clearly.

And, okay, yes, I’m a typical American and was unfamiliar with the Anglophilian (I made up, go with it) moniker Hermione… so I just pronounced it how it looked. In front of the entire fifth grade class. To whom I was supposed to be teaching English and Language Arts. For the entire book, I called her Hermy-own. And since that was the last time we ever discussed Harry Potter, I never had the chance to correct myself. Heck, they may still be calling her Hermy-own today.

To my former Crowne Pointe kiddos: reeeeeally sorry ’bout that.

So, touché, kid. Dooby it is. But when you meet Fleur Delacour, you’re on your own. 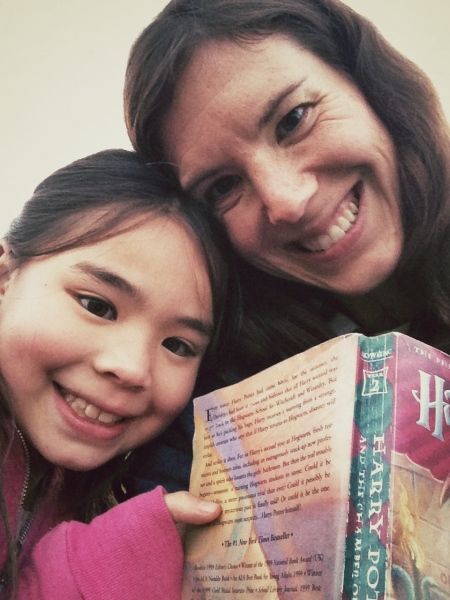 3 thoughts on “Wingardium LeviOsa (not LevioSA)”