Annie’s fabulous Herb Brooks turkey was, in some ways, to be expected. See, although Herb may have been influenced by Nick, the desire to put her all into school project was definitely inherited from me. There was the school wide make-a-poster contest for the fall festival, where my brother and I — in our own respective grades — took first place each. There was the write-about-a-country project (my country: Saudi Arabia) for which I actually brought in a beautiful head scarf from Saudi Arabia, because my dad had gone there on business trips.

There was the See If White Carnations Still Turn Blue After Mixing Crap Like Sugar And Salt And Kool-Aid Into Their Blue Food Coloring-Tinted Water project, which was set up in the guest room for at least two weeks, threatening to turn the carpet aquamarine. There was the acid rain project one of my best friends and I did in 9th grade, where we asked friends and family to send us vials of water and soil collected from around the country (to analyze the acidity and then pore over actual library books to see, way before Google could help out, if there was a connection between soil content and acid rain), for which we filmed at 15-minute video, complete with several “commercials.”

If there was a project to be done, I was going to DO IT, by God, and DO IT WITH ALL MY MIGHT, especially if a tri-fold board was involved. Man, those boards were cool.

But then, as my mom reminded me last week after I posted about Annie’s turkey, there was the… ill-fated… Tsunami Project Disaster of ’87. Perhaps you’ve heard of it?

No? Well, then this is your lucky day.

If memory serves, we had to do a project for science class about some kind of natural disaster. I was quite disappointed to be assigned the tsunami, first because I’d coveted the volcano (you got to blow things up in the classroom, rock on), but also because back then, no one in southwestern Connecticut had really even heard of tsunamis (again, back in the dark ages before Google and CNN and 24 hour news coverage even in the middle of record-breaking typhoons). After doing some research (more library time FTW!), I discovered that tsunamis were actually pretty awesome (in storm-chaser kind of way; work with me, people), and set out to make a project that would aptly demonstrate their awesomeness.

A decent-sized clear plastic bin was procured (undoubtedly by my mother, who had to navigate my ADHD-induced craziness for all of my school projects) – large enough to show what a tsunami was, but not so big I couldn’t carry it to school myself. One half of the bin contained the land, its shoreline and trees and whatever other structures were deemed necessary rendered with clay and things like popsicle sticks, while the other half contained water. By rattling the bin around and simulating an earthquake, the water would slosh ominously toward the land and – voilà – tsunami (or, at least, tsunami, 7th-grade-style), which would knock over some of the houses perched on the beach.

Now, causing the tremors by hand didn’t really work so well — I needed to show that the earthquake (or whatever had caused the disturbance) could happen anywhere, any time, and the displaced water would crest toward land; randomly jiggling the bin back and forth didn’t so much as simulate a tsunami so much as a broken washing machine. I needed something that could be placed just so, rattling, earth-quake like, and then we could all stand back and watch the water roll in. Enter the seemingly perfect solution: my family’s back massager.

We’d had it around for years, and I’d seen it in action many times — for knots just under your shoulders, aching hamstrings, or those extra-fun moments when you placed it on your head and tried to talk, your voice coming out sounding like a robot. You’ve probably seen them out and about; in fact, I just spotted some the other day in Target’s stocking stuffer section:

No, I didn’t buy one; the girls would probably just torture the dogs with them.

Awesome, right? Yeah… Except that my family’s back massager didn’t look like cute little robotic puppies. It looked more like… 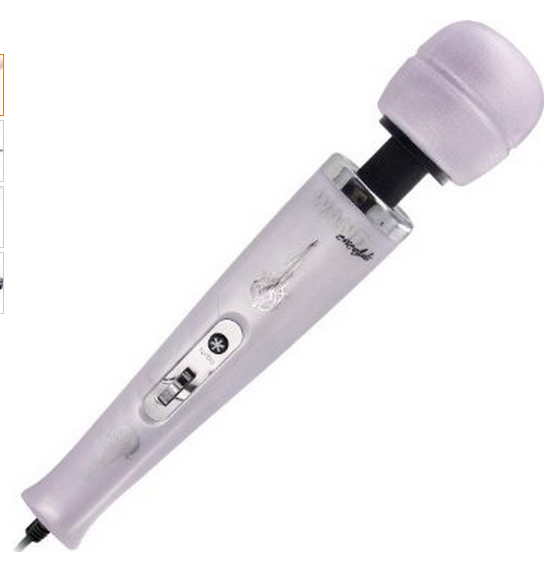 And now you can’t un-see this. IMAGINE HOW I FEEL.

I carefully described to the class what a tsunami was, how one was caused, and the damage one could render. I showed my little clay model. I added in the water (to many appreciative murmurs from my classmates). But when I pulled out the back massager to demonstrate just how a tsunami worked, giggles – mostly from the boys – began to erupt around the room.

I was stumped. What on earth could be so funny about a back massager?
And then the questions started.

“What the heck is that?”

It’s a back massager.

I brought it from home.

Find it? What do you mean? My mom and dad use it, and it was just lying around, so…

Of course. I use it all the time.

*barely-controlled-hysterics* “YOU DO? What do you do with it??”

(impatiently and a little exasperated at their obvious dim-witted-ness) You know – when I have a sore back, or I’ve gotten a charley horse…

Well, I wouldn’t really say it’s fun, but it definitely works – you should try it sometime!

And then I turned the damn thing on and held it up to the bottom of the little plastic display and all hell broke loose — both in the form of the perfectly-formed little tsunami that had brewed in my lovingly constructed project — and amongst my fellow classmates.

The teacher eventually settled everyone down and I soon took my seat, wildly embarrassed but not really certain why. (To this day, I’m not sure how my instructor managed to keep a straight face. Then again, I held it together when my fifth grade general music students created a commercial jingle about an inflatable doll to the tune of “We Will Rock You”, the chorus of which went, “We will.. We will… BLOW YOU!” Teachers are AMAZING, y’all.)

If you look up the word “mortified” in the dictionary, you’ll see my name beside it. Use Google, even. It was that awful.

No, no. I will try my damnedest to prevent them from utterly humiliating themselves in front of their classmates. But if they do – if something slips through the cracks – I will hold their hands and comfort them and tell them that surely it will all be okay.

After all, they have to have SOMETHING to blog about when they get older.