Last Friday, it was my birthday; I turned thirty-eight. I’m neither ashamed to admit my age nor to admit my unabashed love of turning every birthday (even – especially? – my own) into a special occasion.

Being in the spotlight – unless I engineer it or am standing at the head of a classroom – generally makes me uncomfortable. I’m not one to go around to strangers blabbing about myself or my life. But on my birthday, all bets are off. Maybe it’s a mom thing, maybe it’s a primary caregiver thing, maybe it’s a female thing, or maybe it’s just a me thing, but for 363 days of the year, I do not come first. (No, I didn’t do the math wrong [although, given my history with The Math, I don’t fault you for thinking so]. Nick rocks at putting me first on Mother’s Day.)

That’s not to say that I don’t sometimes come first, or that my needs aren’t met, or that Nick’s not pulling his weight… none of that. I’m pretty good about speaking up for myself and taking time when I need it, whether it’s grabbing coffee mid-day or having dinner with a friend or telling the kids they’ll just have to wait a minute, I’m busy, for crying out loud. And Nick is really super about encouraging me to take time for myself and of helping to make sure what I need is taken care of. But, with the exception of Mother’s Day and days when I’m sick or have had surgery, I’m not the focus of the day (and, let’s be honest; when I am sick enough to actually be in bed, the girls are crawling in beside me, and when I had laparoscopic surgery a few years back, I was driving Annie to preschool two days later). And that’s as it should be – God knows I wouldn’t want every day to be about me; even I get sick of Starbucks.

But one day? Yep. It can be all about me. I’m absolutely down with that. Am I asking for attention on my birthday? You betcha. BRING IT.

(Except that November 22nd isn’t really the most fabulous birthday if you want a day that’s all about you. Every five or six years, my birthday falls on Thanksgiving, which is a big ol’ bummer, and for forever, the majority of Americans a generation older than I am have heard my birth date and said, “Ohhhh, that’s the day Kennedy was assassinated!” True, and yes, I read the news coverage of the 50th anniversary just like everyone else. 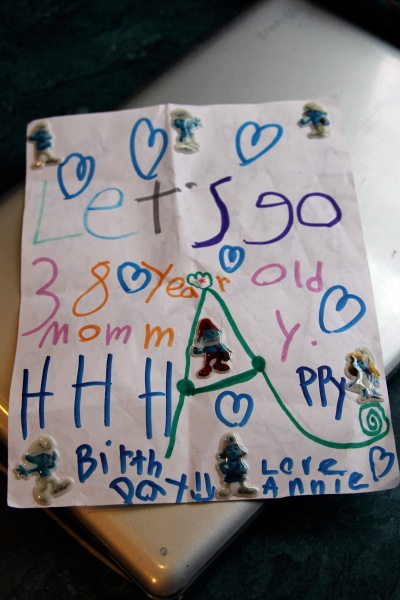 I know plenty of people who totally downplay their birthdays. (By people, I mean adults, because I have yet to meet any children who don’t practically wear a neon sign above their heads on their birthdays. AMEN.) It’s no big deal, they’ll say, just another day, I don’t want to celebrate. And that’s all well and good.

But me? No, man. I’m not shy about it; I’ll work it into any conversation that it’s my birthday. This is the day I was BORN, damn it, and being born is a mighty awesome thing. Even more awesome is the passing of another year – in part, as my dad likes to say, because it sure beats the alternative, but in part because another year under your belt, another year of things seen and done and accomplished and lived and learned and loved, is worth celebrating.

And so celebrate, I did. Last Monday, the rebel moms and I finally made good on our promise to grab some dinner and have a “planning meeting,” and they surprised me with a birthday dessert. On Wednesday, some wonderful friends met me for lunch ’cause it was my birthday in two days, and what better excuse to get together in the middle of the week? Thursday, Friday, and Saturday were filled with some squeezed-in but much-needed me time, taking Ella and Annie out of school to eat lunch at a local restaurant (ooooh, the excitement!), some lovely gifts, phone calls and texts and video chats with family and friends, scads of Facebook well-wishes, a dinner out with just Nick (while GranMary was excellent enough to watch the girls), a birthday dinner in with the girls and GranMary and my own grandma (where I didn’t have to lift a finger), and even a homemade (and quite yummy) cake from Annie and Ella.

It was a very good birthday. So far, thirty-eight is pretty rad.

The older I’ve gotten, the less apprehensive I’ve become about sharing my age. With a late November birthday, I was one of the youngest in my class, and was always one of the last to turn whatever age the other 1975ers had turned. As a teen, it bugged me that I was the youngest, so always hesitated to tell folks how old I was. In my twenties, I was constantly told that I looked young for my age (in fact, I still get carded; last week, a department store salesperson asked if I had the store card – when I said no, he asked if my parents did, and maybe I could use theirs?), so I kept my birth date to myself.

Now, I’m no longer embarrassed to tell people my age. Quite the contrary; thirty-eight feels really good. I no longer judge myself by my peers, but rather by my own set of standards, the majority of which include making sure that Nick, the girls, and I are happy, and that I’m choosing kind far more often than not. There are way more lines around my eyes, and when I see them, I’m reminded of the fabulous days I’ve spent outside in the sun (with sunscreen, no worries, I’m a bit fanatical) and of how incredibly often I laugh, even when I shouldn’t.

Thirty-eight means feeling more confident about who I am as a person, while recognizing that I still have a really, really long way to go to become the person I want to be. It means that I finally – finally! – understand that when someone is critical of me (or offers “advice” that’s really criticism wearing shiny clothes), they’re saying a whole lot more about themselves than they are about me.

Thirty-eight means valuing friendships more than ever, especially as life gets in the way and it can be harder to get together in person. It means valuing family, near and far, and actively working to make the relationships in my life just as I want them to be. It means that my husband has never been more attractive or appreciated, despite the days when we hardly see one another.

Thirty-eight means feeling rooted and grounded and absolutely content, while simultaneously constantly looking to try new things and find the next set of adventures. It means that I’m a whole lot closer to fifty than I am to twenty, or even twenty-five, but that’s just dandy, because I have a heckuva lot of fifty (or almost-fifty) year-old friends, and they’ve shown me that things really do get better with age.

Thirty-eight means reaching the point where weddings and baby showers are replaced by memorial services and funerals, as we lose our parents and our friends’ parents and our parents’ friends. But it also means soccer games and Harry Potter and gingerbread helpers at school and (still!) the wonder of Santa Claus.

Thirty-eight means speaking in a British accent at the grocery store, even when you don’t realize you’re doing it (true story: I was asked today where I’m from, and only then did I realize I was speaking to the woman using a British accent… awkward…), twerking in front of the bedroom mirror when no one is watching, and cleaning dog poop off the wall when your dog has had explosive diarrhea in the middle of the night. It means gratitude and happiness, appreciation and doubt, love and desperate sadness, hope and vulnerability, juicing in the morning and wine in the evenings, and realizing that many things really do get better with a  little chocolate.

Last year was a helluva year, and I don’t know what this next year will bring, but I’m ready. Thirty-eight is where it’s at, and I’m so very glad to be here. It is a time to CELEBRATE, y’all.

Especially when it involves a massage and Caramel Macchiatos. 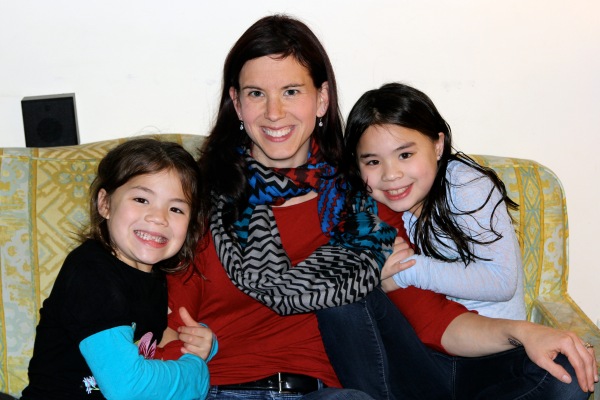 The best accessories when you’re thirty-eight? New scarf, new earrings, and one child hanging off of each arm.