For Christmas, Nick (and the girls, but really it was Nick because he spent all of the time fighting crowds and searching the web and putting things in his “shopping basket” and pressing “order” and having the boxes delivered to our house) gave me two pairs of Merrells, something I’d been coveting for a long while but hadn’t wanted to pony up and purchase for myself. I loved my old Merrells, which were easily slip-on-able and paired perfectly with an array of outfits, from substitute teacher (a tidy top – perhaps a well-fitted sweater – and khakis or slacks; yes, I said slacks) to piano instructor (a clean shirt that’s not a t-shirt and pants that aren’t jeans) to school volunteer (a mostly clean shirt and probably jeans) to errand-runner/dog walker/ chore-doer (anything that doesn’t smell from five inches away). So much did I love them, in fact, they were worn through — and so new Merrells appeared on my Christmas wish list.

The first pair I opened were similar to clogs, except more stylish, so that when covered by the hem of my pants, they resemble attractive boots. Very good. The second pair was different than any Merrell style I’d seen before – a low-cut boot – but they also seemed good. I immediately removed the inner padding from the left shoe (in this case, wadded up brown paper and a cardboard insert that matched the mold of the toe of the boot), slid it on, and remarked that they were fab. Hooray for husbands who a) remember what I asked for for Christmas and b) chose wisely. Happy me. 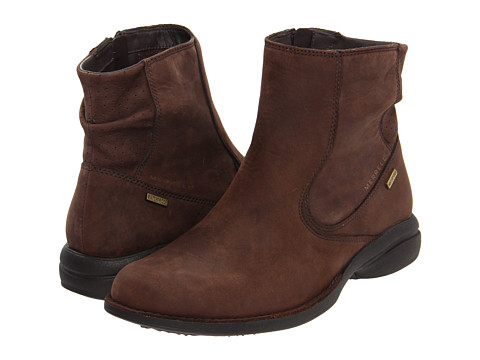 These be the ones

On Christmas, I bummed around in my indoor/outdoor slippers (I call them this because they have a really thick, rubber sole with a wicked tread, enabling them to easily make a trip to the mailbox… or, say, into the third grade classroom to help out with Math Facts. What? These? Yep, my slippers. Forgot I even had ’em on! Super comfy, though), so it wasn’t until the 26th that I officially christened my Merrells. I wore the clogs in the morning to run errands and then decided that the boots might be a better choice for the afternoon, as my feet were getting chilly.

I popped those babies right on and began to walk around, but was slightly discouraged to discover that the right shoe (the one I had not tried previously) felt a little tight. This is not an uncommon occurrence; I broke my left leg thirty years ago, so my left foot has been smaller than my right since then. Also – not to be graphic, but this is important to the story – it seems that I’m developing a bunion on my right big toe. Aside from being unsightly, this bump is mostly frustrating because it can make certain shoes uncomfortable — like, apparently, my new boots.

As I went about my business, putting away the previous day’s bounty, packing for our trip to visit my mom and stepdad, and getting the house ready for our dog sitter, the discomfort in my right foot gave way to outright pain. Still, I pressed on, thinking that perhaps if I wore the shoes for an extended period of time, I’d stretch the right one out and it would fit better. Also – and I realize that this makes no sense – I kind of got pissed. Like, seriously, this stupid bunion is effing up my new shoes?? This bunion is ruining my awesome Christmas gift? I WILL SHOW IT WHO’S BOSS.

I’ve never claimed to be the world’s most rational person.

The hours wore on, and the pain in my right foot became more and more pronounced, and I became more and more upset. By this time – many hours later – I was practically limping, and was sure that, when I removed the shoe, the aching would be so severe, I’d be hobbling around for the rest of the night, and maybe the following day as well. Nick asked how I liked the shoes, and I said that I liked them fine, but that the right one was just a wee bit tight – it must be my stupid bunion. He felt terrible for giving me shoes that didn’t fit properly and asked if I was planning to bring them with us on our trip. When I told him that I’d love to, but I didn’t think it was possible because I didn’t want to lose half of my toes due to lack of circulation, he suggested that we put a tennis ball in the right toe to stretch it out while we were gone. This seemed like a good idea, but I wasn’t about to start now — I was still showing my bunion who was boss.

I’ve never been a very good boss, however, so I’d also begun to panic a bit (who, me?). Hadn’t the podiatrist said that I was fine so long as my foot wasn’t in pain, but if the bump started hurting consistently, I’d need surgery? This must be it – I’d reached the end; there was no hope. Could he get me in as soon as we got back from our trip? When would the surgery be scheduled? How long would it take to recover? BUT I DON’T WANT TO DIE.

Again, rationality is not my strong suit.

Just as I was about to vacuum, Nick noticed me Tiny Timming my way around the living room and told me that enough was enough: take off the damn shoe right now, and he’d stuff a tennis ball inside. He even offered to do the vacuuming while I located and put on my indoor/outdoor slippers (sold!). I gingerly took off my right shoe, breathing an enormous sigh of relief as soon as my foot was released, and handed it to Nick, who turned around to go find one of the dogs’ tennis balls (an un-chewed one, I assume, although at that point I didn’t really care). Before he’d even left the room, however, Nick turned back to me with a quizzical look on his face.

“You said that this shoe was the only one that was tight?”

(exasperated sigh) YES. Because of the bunion. The bunion that will need immediate surgery as soon as we return. How many days do you think you can take off of work?

“Ummm… Just wondering, but do you think that this might have anything to do with it?”

And from the shoe Nick withdrew the cardboard insert that matched the mold of the toe of the boot… the insert that I had already removed from the left shoe, but which I had completely forgotten was even in the right one.

Huh. Look at that.

“Maybe it will fit better now?”

Could be. I can certainly try it on.
(shifts vacuum from one hand to the other as I slip on the boot)
Well, hot damn!

Yes! Yes it does!

“Does it feel okay?”

“There’s no pressure or anything?”

Nope! There’s plenty of room! WHO KNEW THESE WERE SO COMFORTABLE??

“Thank God. I was really worried that I’d given you a gift that didn’t fit.”

And I was really worried about writing a living will.

THESE ARE AWESOME BOOTS. I am so wearing them on our trip.

“Glad we got that solved.”

And I’m really glad I married a man who is not only an excellent gift-giver, but also a genius. Or, at least, a little bit more rational than I.
But, man, let me tell you – I vacuum like a champ.