I’ve always had a knack for remembering arcane bits of knowledge, ever since I was a really tiny tyke. I could “sing” the Star Spangled Banner before I was two (thanks to the Yankees making it into the 1977 World Series, which meant my NYC-area family had reason to hear the anthem each night on the broadcast) and my brother has been known to roll his eyes at the bizarre details I seem to recall when discussing family stories. “Can you tell me what color shirt you were wearing when we visited the White House? How about my shoe size on my 8th birthday?”

But it wasn’t until recently that I’ve begun to think my retention of certain “facts” is taking up so much space in my already-crowded brain (not because I’m so brilliant, but because there’s far too much stuff in our daily lives that I take it upon myself to remember) that I’m no longer able to recall things that actually matter.

Case in point: My seventh graders recently completed a unit on media music – and, specifically, music motifs (think of, say, the theme you hear for Darth Vader and how it differs from the one you hear for Luke and the Jedis). To drive the point home, I decided to have them compose musical motifs of their own for various cartoon characters. Since I wanted to avoid current cartoons (too much outside influence), I decided to use one from my childhood, ultimately deciding on He-Man (the most powerful man in the universe, duh).

While surfing YouTube for appropriate clips, I found myself going down memory lane for at least a dozen cartoons – Smurfs! Jem! Transformers! Inspector Gadget! I then glimpsed a teaser for a cartoon that looked vaguely familiar – The Gummi Bears – but for which I could not remember watching a single episode. And yet… the instant I saw the graphic, the lyrics to the Gummi Bears theme song sprang to mind. 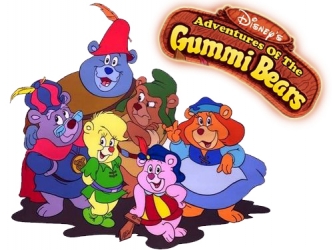 “Dashing and daring, courageous and caring…
Gum-mi BEARS! Bouncing here and there and ev-‘ry where!”

Sing with me!
“Magic and mystery are part of their history, along with the secret of gummi beary juice (wtf?)… Their *key change!* legend is growing, they take pride in knowing they’ll fight for what’s right in whatever they do! GUM-MI BEARS!! Bouncing here and there…”

You guys. I knew every single word to the Gummi Bears theme song, even though I could not recall ever watching this show. NOT ONCE. Why on earth is a jingle about forest bears singing out in chorus taking up valuable real estate in my brain?

Real estate that could, oh, be used for something useful, like remembering what Pi really is. Right around the time I was tripping down cartoon memory lane, we were invited to a friend’s delicious Pi(e) party (we brought a gluten-free nutella cream cheese confection and a savory potato tart; both were awesome, along with all the rest), and Ella and Annie – understandably – asked me to explain what Pi was. “Well, it’s 3.14…” I began, but quickly realized that 3.14 means absolutely nothing yet to my offspring. But when I started trying to explain what the 3.14 part meant, it didn’t go so well… “It’s, um, a measure of a circle. There’s, like, the… diameter? Which is all the way across? And then there’s the circumference, which is all the way around… And maybe the radius is involved? I think that’s what it’s called? And Pi is, uhhh… I think maybe you divide one of the numbers by one of the other numbers… And Pi never ends, it just goes on forever, and people memorize the numbers and it’s hard because the numbers don’t repeat and…”

Nope. I have NO IDEA what Pi is, other than 3.14. And a funky-looking symbol.

Now this is the kind of Pi(e) I can get behind.

Did I know, long ago and far, far away? Sure. But the part of my brain that was devoted to understanding what Pi is has now been overtaken by the Gummi Bear theme song. Or perhaps all of the colors of Joseph’s Amazing Technicolor Dreamcoat. (In case you were wondering, it was red and yellow and green and brown and scarlet and black and ochre and peach and ruby and olive and violet and fawn and lilac and gold and chocolate and mauve and cream and crimson and silver and rose and azure and lemon and russet and gray and purple and olive and pink and orange and blue/gold, depending on whether or not it’s the reprise. No, I am not kidding, and no, I did not look that up.) The colors of Joseph’s coat have edged out anything I may have remembered about Archduke Ferdinand and how he was involved in the start of World War I. It was World War I, wasn’t it? Some kind of assassination? I DON’T KNOW ANYMORE, because the colors and the bears are taking up too much room.

I would love to remember how to get to the house of my farthest-away piano student, but I cannot seem to commit the directions to memory and have to rely on my cell phone each time. Yet, when Ella (who is Maleficent crazy because “I like evil things”… Awesome…) was looking into the upcoming Maleficent movie and she and Nick remarked how young Aurora was played by Angelina Jolie’s daughter (because she was the only child who didn’t burst into tears at the sight of her mother in full-on evil witch makeup), I chimed in with, “Oh, that must be Vivienne.” When Nick looked at me sideways, I sheepishly admitted that I know the names of all of Brad and Angelina’s children, in order of age (Maddox, Pax, Zahara, Shiloh, and, of course, the twins, Knox, and Vivienne).

Why on God’s green earth have I memorized the names of random actors’ children??? While I’m sure they’re delightful human beings, it’s not like they, themselves, are famous, nor like they hold personal meaning to me (unlike, say, the fictional Von Trapp children — Liesl, Friedrich, Louisa, Kurt, Brigitta, Marta, and Gretl — or the ginger Weasley children — Bill, Charlie, Percy, Fred, George, Ron, and Ginny). Whatever brain space has been reserved to remembering these offspring, fictional or not, is undoubtedly space that could have gotten me to my piano student’s house without needing my iPhone. BUT NO GO. It’s a losing cause.

I can tell you the names of the first eight winners of American Idol (after that, I kind of stopped watching) but not exactly what’s going on in Crimea/Russia/the Ukraine. I have no idea who the current French Prime Minister is, but I do know all of the lyrics to “We Didn’t Start The Fire” (which is kind of like being a historian, no?), as well as the year it came out (beginning of freshman year, so 1989, obviously).

I know enough to know that GMOs are bad (right?) and to avoid HFCS, but I have not yet taken the time to educate myself on the yuckiness of all kinds of chemicals in food. This is probably because the “nutrition” portion of my brain is all filled up with the lyrics to the McDonald’s menu song – not the short one from the commercial, but, you know, the really long one from the promo where you got a RECORD that you’d play at home to see if you won a million dollars (Side note: my BFF and I each memorized this song and performed it, with harmony, for complete strangers on the monorail in Walt Disney World. People applauded.  It was really… something.) 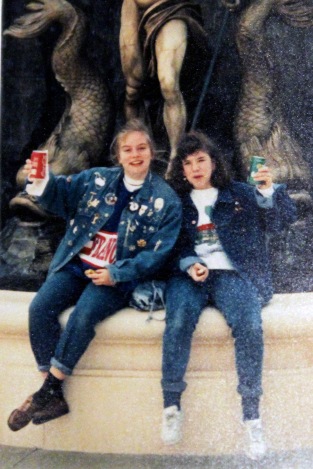 We’re in Epcot here, not on the monorail, but you can see how our amazing sense of style clearly would have garnered attention.

So, no, I can’t quite seem to recall when each of my (two) children has Art, nor which facial cleanser a friend recommended, nor how to multiply certain kinds of fractions. It’s not that I’m not interested, and it’s not that I’m just terrible at The Math… it’s because my brain is already SO FULL of completely useless information, there is simply very little space to retain much else.

If you want me to remember that I signed up to bring an h’ors d’oeuvre to the party, I can put it in my never-ending To Do book, but also, please email me a short reminder. If you’d like to actually discuss politics or learn my opinion about the earthquake near Chile, let me know in advance so I can brush up and hope that the last-minute cramming helps those tidbits to stick in my head for more than twenty minutes.

But if you’d like me to rap out every single word to all five minutes of “Parents Just Don’t Understand,” no advanced notice is necessary. I’ve got this.

“I remember one year, my mom took me school shopping… It was me, my brother, my mom, oh!, my pop, and my little sister all hopped in the car… We headed on down to the Gallery Mall…”