We’re halfway* through summer break, so this seems as good a time as any to look back on what’s already occurred and decide if the second half of summer should look like the first, or if some drastic changes should be made.

* We’re technically two days past the halfway mark. Close enough.
** I realize this only applies to those of us in the northeast and on the west coast; some of you have children returning to school in about ten minutes, which, frankly, is just crazy talk.

Upon reflection, it seems that summer has passed by in a pretty summer-like fashion: family visits, vacations, s’mores, camps, fresh veggies, swimming, humidity, and fruity cocktails. The girls have gamely checked things off of their Summer Fun List, but have also been happy to just hang out. Hell, Nick and I have even managed to have a good time along the way.

The problem with summer is this: it’s a total wasteland. Everything just floats about without any boundaries or structure, because hey, It’s Summer! Weekdays resemble weekends – no early bedtimes to enforce, dinner whenever it suits us, “exciting” activities that would typically be reserved for Saturday taking place any old time. I wake up each morning and have to check which day of the week it is. This past Wednesday, Annie asked me if it was Thursday and I told her yes – not to mess with her, but because I truly forgot which day it was – and she promptly burst into tears because Thursday is the day we pick up our farm share, and she thought we’d missed it. 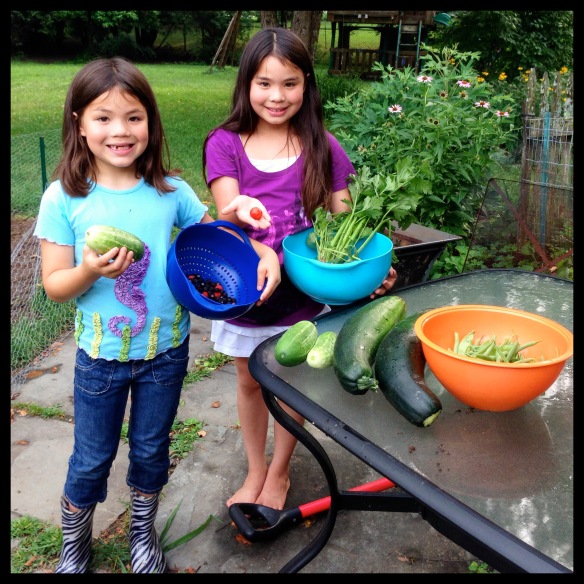 The haul from our garden, not the farm share…

I understand Annie’s freak-out. See, I’m someone who craves predictability (even though I’m wildly impulsive). I like to know when things will happen and how long they’ll last. The open days of summer don’t fill me with joyful anticipation; they fill me with anxiety. (It’s no coincidence that my Xanax supply wanes between Memorial and Labor Day, if you know what I’m saying.) I’m not necessarily unhappy at the lack of structure; it just feels really bizarre, like everything’s slightly off-kilter.

It’s kind of bizarre for my girls, too. The routine that they’d become used to is gone, and it’s exciting and unnerving all at the same time. They don’t see their school friends regularly during the summer. For a while, this is good – a much-needed break – but right about now they start to really miss their pals. With vacation and camp schedules colliding, though, getting together can be hard. Summer is challenging in other ways, too. We eat boatloads of crappy food, which is delicious (cheesy bread and Helluva Good dip, holla!), but also feels… well… crappy. In July and August, we spend as much time away from home as we do at home, which is a blast and all, but can feel somewhat shiftless. The girls have been putting themselves to bed early (whaaa?) because I’ve had to awaken them in the mornings for camp, and they’re tired of being tired. 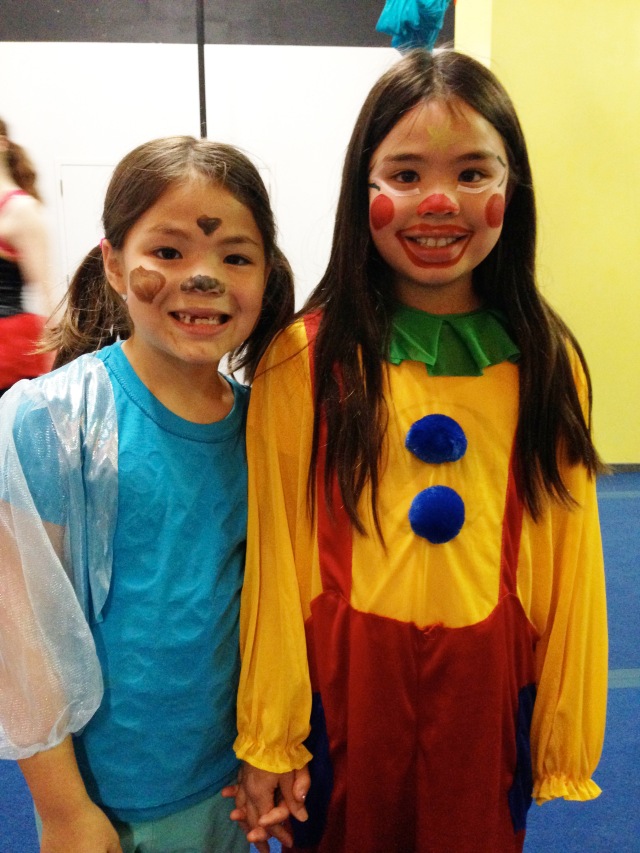 All dressed up for their performance at their aerial arts camp.

People don’t return phone calls in the summer. You, me, the aquatics director at the Y – messages are left but no one seems to care. I don’t know why this is, but people lose the ability to call anyone back the moment the kids are out of school. Actually, I do know why this is: because our Call Back Time no longer exists. That portion of the day when you’d routinely sit down and make sure you got in touch with folks? Gone. We’re on Summer Time now, which essentially means we’re like the contractors in The Money Pit who keep insisting that Tom Hanks’s house will be repaired in “two weeks” and then taking twelve million weeks to actually complete the job.

That may be the biggest kicker of them all: in summer, there is ALL THIS TIME, and yet NOTHING GETS DONE.

During the school year, Nick will come home at the end of the day and ask how my day went, and I’ll be all, “Oh, it was fine. I’m really glad I was able to take the dogs for that walk before it rained, because after I subbed this morning – four kindergarten music classes, really cute but lots of nose pickers – I got completely soaked when I went to Wegmans, but at least I remembered to pick up the toilet paper. So I was still soaked when I went to the Y, but that was okay, because I was sweating, you know? And then I put the groceries away and got cleaned up, but while I was in the shower I noticed that the tiles were looking kind of gross, so I re-grouted the lower three layers of tile and decided I might as well reorganize the linen closet as long as I was in there. After the girls and I walked home from school, they had a snack and we went to Target – they did their math facts in the car and I picked up the prescription – and while they were finishing the rest of their homework, I spoke to the insurance agency; they said we just need to resubmit the proposal and they’ll take care of it. Watch out in the dining room, I just mopped in there – hey, while I’m thinking of it, are you able to come home early tomorrow night? I’m teaching piano late and the babysitter cancelled. Oh, and I finally got the mango chutney when I went to the store, so we’re having that new chicken recipe we saw on TV the other night. How was your day?”

Now, when Nick comes home and asks how my day went, I’m either, “Where have you been? Why are you working on Sunday?” (and he’s like, “It’s Tuesday”), or “It was so good. We made brownies and the girls showed me their new dance routine six times and I actually managed to sort through the mail. Oh, and the leftover mango chutney chicken should be thawed in about an hour.”

Some of this, I understand, because I impose limits on myself. “Yeah, you should be answering those emails/editing those photos/cleaning out the art cabinet/eating something other than Starbursts… but it’s SUMMER! Will you get the chance to sit on the dock/play with the kids/do a crossword/stuff your face with Starbursts once the school year rolls around? No, you will not.”

And that’s kinda good, right? The Letting Go and Being In The Moment?

We went to a local ropes course… 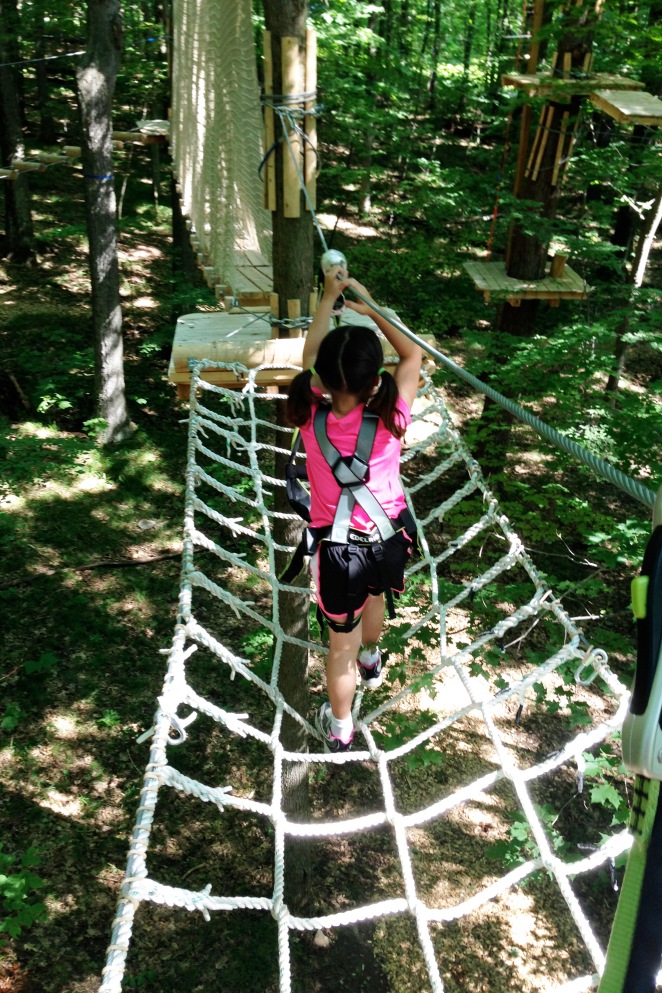 Yes, yes, it is, and I’m glad I’m enjoying myself – and now that I think about it, my Xanax intake has been pretty nonexistent lately – but I seriously don’t know which end is up. The hours blend together and time passes both slowly and wicked-fast and suddenly it’s dinnertime and I realize I haven’t been to the store in over a week. I’ve got at least a dozen potential blog posts in my head that I really, really would like to write, but nope. No writing. My children often wash their hair in the lake, but we’re not at the lake every day, so I seriously cannot tell you when the last time was that they bathed.

Does that matter? Does hair need to be washed in the summer?

We had new neighbors move in next door yesterday – the former ones had lived in their house for 35 years, with us beside them for the last seven – and it was bittersweet. We were sad to see our awesome neighbors go, but Ella and Annie are excited because the new ones have young kids, including two girls. We haven’t met them yet, but I’m hoping we make a good impression. I’d debated pulling up the weeds that were growing on our side of the fence – you know, to show them how tidy our yard is so they don’t think they moved in next to people whose yard is a mess – but then I was like, “Ehhhh… Why give them the wrong idea?”

That’s what happens when you move in during the summer: you meet Summer Emily. I mean, it’s not exactly like I’m Weeder Extraordinaire during the school year, but I’m somewhat more put together, you know? Then again, maybe this is a good thing; they can meet Summer Emily now, and then when September rolls around and, like magic, the yard is properly maintained and the children leave the house with their hair fixed and I actually know what day of the week it is, they’ll be all, School Year Emily is really impressive!

After looking at the calendar, the second half of our summer looks really similar to the first. All things considered, it seems to have been a nice balance thus far, so I don’t really know that anything needs to change in August. Which is a good thing, ’cause let’s face it – they’re not going to change, because Summer Emily has absolutely no momentum. Except when it comes to eating ice cream; I am a whiz at that.

So, welcome, new neighbors. Welcome to our cul-de-sac, to this fantastic neighborhood that we could not be luckier to call home. We plan to formally meet you once you’ve settled in (and might even bring baked goods, if I can manage to cobble together the ingredients), and we’re looking forward to getting to know you. I hope you like dogs.

Oh, and if you need anything, I’d recommend just ringing the doorbell and asking for it. Whatever you do, don’t call and leave a message; Summer Emily is apparently not returning calls until after Labor Day. 3 thoughts on “And the living is lazy”