For as long as I can remember, my dad and his job have always gone hand in hand. Sure, there were other ways that he filled his time – for example, he loves to golf. He plays tennis. He enjoys history books (I believe that the Civil War and presidential biographies are particular favorites). He golfs. He sips a glass of wine with his wife in the evenings. He reads The New York Times and The Wall Street Journal religiously (and frequently sends me links to articles with nary an introduction). He runs and works hard to stay healthy. He loves being a total goofball with his granddaughters. And have I mentioned that he likes golf?

But, alongside all of that, my father worked. Every morning, he would awaken at the crack of dawn (for real, like four- or five-something a.m.), put on his suit and tie, and take the train into Manhattan. He would walk to his high-rise, almost always arriving to his desk before 8 a.m., work all day, and then reverse the process back home, usually pulling into the station around 6 p.m. When I think of him commuting, he is always wearing a long tan trench coat, smooth and crisp. If I close my eyes, I can still smell the rush of air that accompanied him in the door – clean and leathery – and feel his cool cheek, chilled from traveling in the autumn air, against my face.

He took a briefcase with him, too – when I was a kid, one of those hard-backed kinds, the ones with the brass-colored latch that would snap and lock into place, and more recently a briefcase that was more like a leather satchel (although never, ever a backpack or man-purse). Growing up, I didn’t really understand what he did – something with stocks? Assets? Investments? (Not a trader, but he did work in the investment industry.) I did know, however, that he was good at it – really, really good.

I remember a math assignment in 5th grade where we had to pick three stocks from the NYSE – any stocks we wanted – and follow them for a few weeks to see if the prices went down or up. (I’m using very technical terms here, I know; do try to keep up.) The top three individual stocks – the ones that had earned the most over the course of those weeks – would receive a prize, meaning that three different students should have received top honors… except that I swept the awards because my three stocks – chosen with my dad’s advice – were the most successful. (Lest you think this was a fluke, three years later when my brother and a friend tapped my dad for his advice again on this very same assignment, they each swept their class’s awards, too.)

Work defined my father. I don’t mean this in a negative way at all, but simply that his job was an incredibly important part of his life, of who he was. He put in long hours, sometimes traveling around the country and the world, but although the commuting was a drag, he truly loved what he did. He came alive at the office  – not more than when I saw him at home, but different. It was challenging and fulfilling and you could just see it in his eyes, that spark of curiosity and intelligence. Although I didn’t visit him at the office very much when I was younger, as an adult I loved watching him interact with his coworkers; he spoke with authority and honesty, and they so clearly respected him.

There were times when my dad’s job was hard for me – when he had to travel and missed piano recitals, when he had to work late and wasn’t home for dinner – but I was proud of him and what he did. I couldn’t imagine him not doing his job; it was woven into his fabric. For forty-three years, dad and work were practically synonymous with one another…

… until this past June, when he retired.

I’d long known it was coming. He’d made the plans well in advance, rather giddily – he even had an app on his phone that counted down the days and hours until he was done. He’d loved it, had put everything he had into it, but enough was enough. I understood – he wanted to live life while he could, it absolutely made sense, I was so happy for him – but it felt weird. You mean you’re not heading into the office today? You don’t have any meetings scheduled? We don’t have to wait to call you until after you get home? WHAT IS GOING ON??

The first day of his retirement, my dad called us at 8 a.m. and asked to speak to Ella and Annie. “Do you know why I’m calling you right now?” he questioned; they were stumped. “Because I’m not working, so I can! How about that!” When he said that part of what he hoped to do when he retired was visit more often, I nodded politely but didn’t really put too much stock (oh ho, a pun!)  in it – not because I doubted him, but because the idea was so foreign. (Just come visit? Not during a holiday or school break? For no reason other than because? Really?) But then last month I got a call from him saying that Grand Meg was going out of town for a few days in September, and he would also like to take a trip… to Rochester. To see me. And the girls – because he wanted to, because he could.

It happened that Nick was slated to be out of town then, too, and so this past Sunday the girls and I found ourselves being paid a visit by my dad – just to hang out. Although he’d visited me in college (making a point of arranging business trips nearby so he could check out my dorm room and take me out to dinner), this was really the first time that it had been just me and my dad in, maybe… ever. I will admit, there was a small bit of me that was concerned – what would we do all day??

As it turned out, I needn’t have worried.

We played with Ella and Annie. We went out for dinner. He walked the girls to school.

We took the dogs for long walks around the neighborhood. He threw the ball for Langston. We visited the girls at school and ate lunch with them.

It tickles me to no end that my dad – the former super-duper investment guy – ordered a school lunch.
He chose the fruit and yogurt option and totally cleaned his tray. 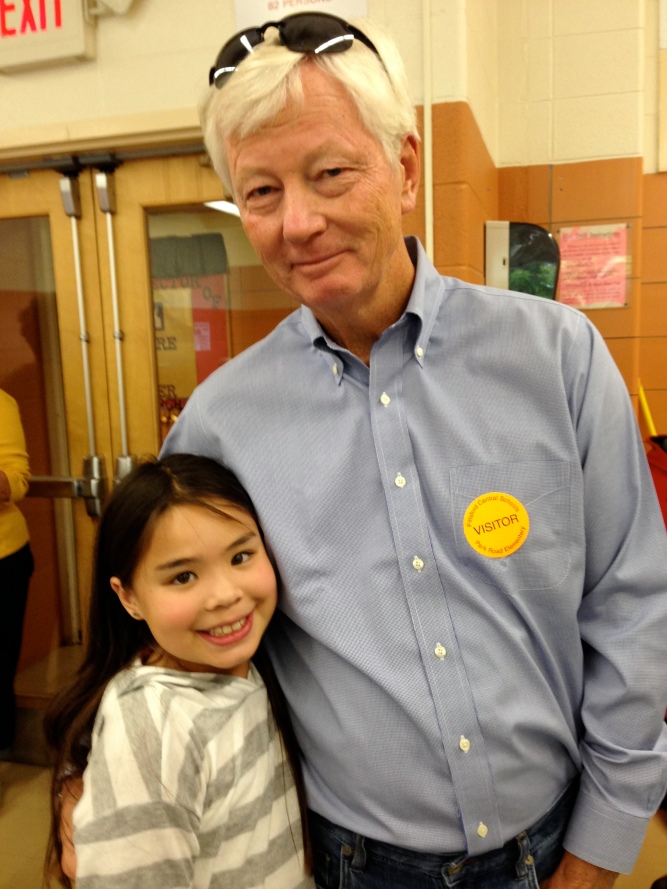 We talked. He patiently occupied his time while I did work. We went to one of the girls’ swim practices. He peeked into their classrooms and they showed him their desks.

We drove around town. We checked out some TV. He looked over the girls’ school papers and listened while they read to him. He watched as they attempted to perform magic tricks. We ate dinner at home and tucked the girls in at night.

In short, we did a whole bunch of stuff but also nothing at all except be together, and they were some of the best two days I’ve ever had.

It’s still a little strange thinking of my dad without his job, but I believe I’m liking this retirement business. It seems to be suiting him well, too. Whereas there was a time – all of the years, really – when he didn’t seem too interested in pop culture (save for what’s discussed in the WSJ and NYT), now that my dad’s days are a little less busy, he has the opportunity to explore certain cultural touchstones that were previously off limits. Just yesterday, he emailed my brother and me to express his concern that Cameron Diaz is dating Benji Madden. In what quickly became one of my favorite email exchanges of all time, he then explained that he had read this news… in People magazine. MY DAD IS READING PEOPLE, Y’ALL, AND IT IS AWESOME.

Yes. I’d definitely say that this retirement thing is working out quite nicely.

1 thought on “Change Is Good”