The other day, the girls asked me to print out a photo that had been saved on my computer. As they gathered ’round the screen (today’s version of the campfire or the Victrola), they laughed out loud (that’s not an exaggeration) when they discovered that the photo – taken last week – was kept in a file titled “current 2013”. I fully understood their amusement; here it is, merely two months from twenty-FIFteen, and I’m not only using a folder named for last year, I’ve further delineated the file as “current.”

If it had been a mistake, if I’d put the photos in the wrong folder, we could have chuckled at my error and moved along. But it was not. Here’s how my photo sorting process goes: I take digital photos and upload them to my computer, where they are sorted automatically into folders by the date on which they were taken. Because many of the photos are taken with my “good” camera, they are very large, which makes for high quality images but doesn’t work so well when I want to put them onto various websites – they take forever to load and they take up a ton of space.

Hence, I go through the photos and edit them, which occasionally means actually playing with brightness and contrast and lighting and erasing double chins and smoothing wrinkles and even moving heads from one photo to the next, but far more often means simply saving the photos at a smaller size in a temporary folder marked “current” and then moving them into their permanent folders (“March 2014”, “Back To School”) later on. It used to be that my “current” folder was, indeed, current – I’d edit photos within a few weeks of taking them, move them on shortly thereafter, and would stay relatively on top of things. The “current 2010” folder would be deleted once 2011 arrived, and so on.

And then I fell behind. Waaaay behind. I’m still using the “current 2013” folder because, you guessed it… I haven’t finished going through the photos from the 2013 calendar year, so I never moved onto a 2014 folder. Back in March, I said that I was approximately two weeks from “lapping” myself in photos. Well, my friends, I far surpassed that estimation, because as of today, the photos that need editing going back to… hold on, let me check… May 10, 2013. Nearly EIGHTEEN MONTHS AGO. I hardly even recognize the people in those pictures; Annie had, like, six more teeth then that she does now.

That’s not to say that I haven’t looked at, nor edited, any of the photos I’ve taken in a year and a half; obviously, I have, because you’ve seen them. I edit what’s most important to me and what’s needed for various deadlines. But as far as being “caught up” on photo editing? Not so much. To be honest, at this point, I’m not sure that I’ll ever be. Perhaps I should just look into a new photo storage plan and be done with it – yay, all caught up!

When I think about it, the whole picture debacle is really just a tangible (digital?) example of life in general. Just today, I was listening to other folks at the Y talking about how they’re trying to “get ahead.” They’re anticipating what’s coming up next week, next month, whatever, and are trying to get a jump on things so that, I don’t know, they feel better about stuff maybe? I get that, I really do. I always make the girls’ lunches (when they don’t make them themselves, holla!) the night before because the mere thought of doing it in the morning makes me break out into a sweat. I ask family members for their Christmas wish lists in early November because I prefer to be done shopping by Thanksgiving. We save money and have 529 plans for the girls and all that, because, yes, it helps to be one step ahead.

But sometimes? Sometimes you just can’t. I mean, sure, there are times when you choose not to pack for that trip because you still have three days before the plane leaves and you’d rather watch Game of Thrones. Procrastination is a fabulous motivator, after all. There are other times, though, when you’re truly only able to do what needs to be done right now, today – when you’re able to tread water and carry on a conversation with the lifeguard and maybe inch forward, but you cannot even begin to think about forging ahead.

Then, just when you’re starting to get the hang of things and keep your head from getting wet, life is, you know, life and throws all these ridiculous balls in the pool that you have to bat around or keep afloat. Sometimes, it’s disruptive enough – a death, an illness, a bout of depression, a job loss, something big – that you just have to get out of the pool altogether and take a knee (I know I’m mixing sports metaphors here; there’s a reason why my dad said I had the best “practice swing” on the fifth-grade softball team). Other times, it’s not that huge, but it’s disruptive nonetheless… the firewood that gets delivered mid-week and is situated in exactly the spot where the trick-or-treaters will be walking between your lawn and your neighbors’ so you absolutely have to get it moved right now even though you had a million other things on your to-do list… 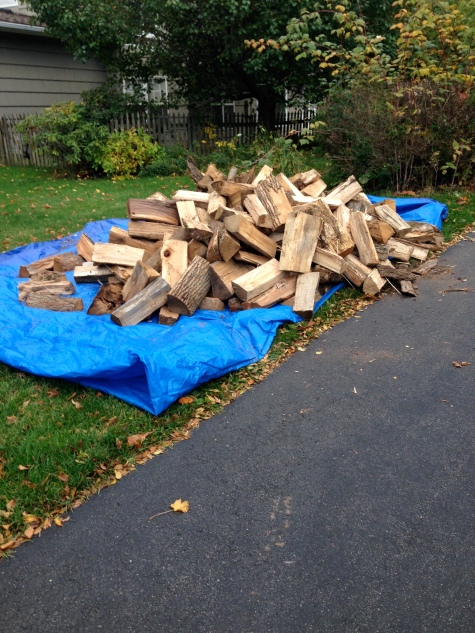 … or a dog who has had trouble with what you thought was heatstroke but now could be something having to do with his heart, so he has to wear a Holter monitor for 24 hours (which makes him quite grumpy) and is really no big deal but you do have to watch him whenever he’s outside and record all of his activity, which is easy but just takes a little time, you know?

So you can tread and you can keep your head above water – most of the time – but forward progress is just not happening. In fact, you begin to realize that not only is it pretty much impossible to “get ahead,” it’s also damned near impossible to “get caught up.” Getting “caught up” implies that, if we accomplish everything we’ve currently got on our life roster, we can take a breather because – ta da! – finished! But it doesn’t work like that because the list never ends; it’s not like a school course where once you’ve completed the work and taken the tests (which you hoped were essays because you tend to be just a wee bit long-winded and can sometimes talk your way into a good grade), you can rest easy because it’s over. No, this life syllabus keeps adding and changing and getting torn up and started again. Frankly, I’m finding that trying to get “ahead” or even to get “caught up” are making me kind of crazy.

Maybe, instead, we need to focus on simply trying to get “even” – to do what we need to do when we need to do it and not worry so much about the rest. When we get even, we might feel more balanced, because we’re not trying to reach so far in either direction. Perhaps, if we just get even, we can stop giving ourselves so much flack about all that we haven’t accomplished yet or working ourselves into the ground to stay one step ahead of the game. Maybe, if we get even, we can enjoy the process a little bit more.

I don’t know – it’s just an idea, one that I’m not exactly putting into practice yet, just talking through. I’m certainly not suggesting that we shouldn’t try, nor that we should just give up. It doesn’t need to be cut and dried, either. I mean, if you enjoy trying to get ahead – the way I enjoy buying Christmas presents early – then it seems like a good thing. And sometimes, it’s a prudent thing; far better to replace the roof before it starts leaking, you know? Likewise, if you set specific goals and check ’em all off and feel totally “caught up” and then want to kick back and revel in that delicious accomplishment, rock on with your bad self. If it’s working, then it’s working.

But if it’s making you miserable and crazy, if you feel like you’ll never be caught up or ahead, if it feels like you’re just constantly treading water… then I think it’s time to get even.  To get balanced. To get some sleep. To get a grip, for real. To get caught up with friends. To get a latte. To get laid. To get to the gym. To get to a movie. To get a hug. To get your feet on the ground.

And then to get moving again when you can, even if it’s just inching forward.
I mean, so long as you can find the photos when your kids ask for them, does it really matter where and how they’re stored?

(Side note: if you need me next week, I’ll be busy sorting and saving my pictures. If I find any good ones, I promise to share.)

This picture is blurry and poorly lit and has nothing to do with anything but it was taken at a haunted hayride a few days ago and we all had a good time and, damn it, we were happy.