I had planned on continuing to talk about our vacation – the stories behind Nick’s birthday and my getting hypothermia are tremendously riveting – but something happened over the last couple of weeks that made me realize I need to take a slight detour.

Two days before break, the wonderful little women’s church community I’m a part of delivered dinner to a homeless shelter. We divvied up the cooking and supplies (pulled pork, cornbread, baked beans, coleslaw, and numerous drinks and homemade desserts), took everything to the shelter, and served the meal. We agreed that families would be invited to join in, so I brought Annie and Ella along.

(More accurately, our awesome babysitter, B, brought them because I was teaching piano lessons immediately prior to dinner. They arrived before me and I don’t think I’d ever seen their eyes wider than when I walked into the shelter and they found me.)

As far as homeless shelters go, this one seems to be pretty solid. They have a large, new warehouse space (after having recently made headlines when they were controversially kicked out of their tent city in December) – which, although lacking any cooking facilities or running water (hence the need to bring in prepared food; there are port-a-potties on site and a van takes the residents to other locations with bathing facilities), is almost cozy. Every resident appears to have his or her own tidily-kept sleeping space (with the vast majority on mattresses); donated and purchased winter clothing is handed out; there’s a communal TV and a few couches on which to watch it; employment-location services are provided.

I mean, it’s hardly posh – and I’m sure that all of the residents would rather be in their own homes (if they had them to return to…) – but I imagine that it beats huddling down beneath underpasses or in abandoned subway tunnels, especially in this particularly freezing Rochester winter.

It’s no secret that I’m amazingly fortunate to have grown up white, affluent, loved, and educated. Still, although I haven’t spent time in actual homeless shelters before, I have volunteered at soup kitchens, lived in the projects, worked with poverty-stricken kids, and made my way through Harlem (while in grad school) enough times to not have been shocked or taken aback by the experience at Sanctuary Village. My girls, however, had never seen anything like it – maybe not even on television or online. We’ve donated to disaster relief, watched videos of people displaced by tsunamis and earthquakes and tornadoes and violence, and discussed how very privileged we are… But, for them, seeing it in person was astounding.

They couldn’t believe that there were only mattresses, not beds (the lack of a bed was somehow very powerful to them). They were taken aback that so many people shared the same space (the shelter is absolutely overflowing beyond its capacity because of the weather). They could not comprehend that the belongings scattered around each person’s living area – most of which could fill a single trash bag – were likely everything that these people possessed.

Ella and Annie were also thrown off-guard by how exceedingly nice everyone was to them, to all of us. Here were these strangers who had seemingly everything in the world to complain about – or, at least, every right to be grumpy – and yet they were so kind. They thanked us up and down for bringing the food. They said “please” and “excuse me” when they lined up for dinner. They engaged us in pleasant, friendly conversation and told the girls they look like twins. 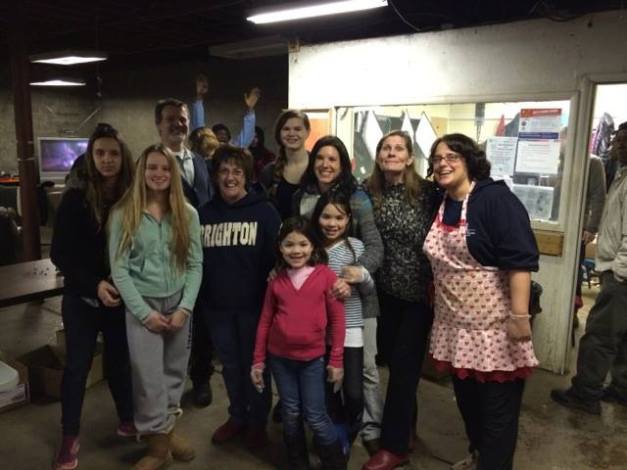 Our group, post-meal.
Photo from the Sanctuary Village and Sophia Community Facebook pages.

In short, they were… human beings. Not statistics. Not people who had made mistakes or who “should” be doing any number of things to get out of “this situation.” Just regular folks who found themselves unable to keep a home, for one reason or another, and who had no place else to turn. It was humbling and eye-opening and nothing short of incredible. We discussed it long into the night and vowed to better appreciate our own safe, comfortable, warm homes.

And then, our food supply completely depleted, we got in our warm car and drove to the grocery store and spent more money purchasing dinner from the prepared food bar for the three of us than I had procuring baked beans and coleslaw for 60.

We had never been more grateful for a meal.
Nor, I thought, had I ever had a more moving, potentially life-changing (or at least perspective-changing) experience.
Which shows you that I really do have another think coming…

(Part Two to be posted soon.)

4 thoughts on “Perspective (part one)”