For the first time in my life as a parent, I was unable to fall asleep last night because I was worried about my children.

It was not a welcome occurrence.

I suppose we’ve been tremendously blessed – lucky, fortunate, whatever works best for you – that Ella and Annie haven’t really given us much to worry about. For the most part, they’ve been healthy (knock wood). We can afford to clothe, feed, and house them. Academics come easily. They’re socially and emotionally well-adjusted. Sure, there have been nights when I’ve been concerned about the latest stomach bug, and the times when one of them appears at my bedside like Cousin Itt aren’t exactly the moments I count among those I want to “savor because it all goes so fast.” But overall? It’s been pretty smooth.

Even now, the stuff that I’m worrying about isn’t exactly of the life-or-death variety – more of the growing pains variety – but it’s taking up enough of our waking hours (and, apparently, my sleeping hours) that I’m having a hard time not thinking about it.  (I’ve carefully considered whether or not to describe these situations, even vaguely or as an anecdotal aggregate of many stories. There’s a part of me that wants to because I know we’re not alone and I think there’s tremendous benefit in forming connections with someone else who’s walking the same path, in feeling that someone out there understands. That benefit, however, does not outweigh the responsibility I have to my daughters to put their best interests first. Out of respect for them and their privacy, I’m choosing not to write about the specifics.)

But here’s the rub: I want to fix it. I want to step in and take the difficult stuff away. Not all of it, of course; I’m a firm believer that kids need to suffer disappointments and setbacks and struggles in order to grow and learn and become competent, capable human beings. But some of it – the nonsense, the stuff that, in the grand scheme of things, is just asinine and they’ll look at it in later years and say, “Gosh, that was a waste of time” – I want nothing more than to make disappear.

Or, at the very least, I want to magically be able to give them the tools and the moves to face their problems squarely, to stand tall and proud, to be utterly confident in themselves and their beliefs. “If you just use this wand and wear this cape and do this roundhouse kick and read from this book and say these words, you will be victorious every single time. You have GOT this. Ba-BAM!”

I’m learning the hard way that it isn’t that easy.
By God – and this is the hardest part of all – they have to learn to do it themselves.

Me and my best big girl, Ella, age four.

I know that struggles are normal. I know that essentially no child makes it through to adulthood without some drama, without a time that was rough, without growing pains. My therapist reminded me that kids are supposed to bump into things and into one another; that’s how they feel their way, how they learn and mature; it’s normal. This reminder was simultaneously helpful and maddening.

Yesterday, we learned the wonderful news that an extended family member is expecting her first child. As I chatted with her on Facebook, she confessed that, in addition to feeling elated, she’s also worried “every second.” I so remember those feelings. For nine months, you don’t let down your guard. You check the toilet every time you pee (which is often). You wonder if the baby is moving too much, then grow alarmed when there’s not enough movement. You question each ache and pain – is that normal? Is he in the right place? Is she big enough? Am I giving her enough nutrients? What if I get gestational diabetes? Is he getting enough oxygen? What did that thing on the sonogram mean? You’re excited and anxious and basically don’t fully let out a breath until the baby takes his or her first one.

(Or, at least, that’s how I felt, especially with my first pregnancy. Maybe this is why I wanted to slap everyone who called pregnancy “magical” or touched my stomach, unsolicited.)

Then, the baby is here, in your arms – success! Pregnancy, check! The worrying is over!

Until you realize that you have no idea what to do when the baby won’t stop crying. And when was the last time he ate? Please wash your hands before you pick her up. Where did this rash come from? What do you mean she isn’t gaining weight like she should? You did put him down on his back, right? And the carseat is properly buckled? And he’s not wearing too many layers? And the music isn’t too loud?

When the danger of SIDS has passed, you tell yourself, that’s when you’ll relax. When you’re getting more sleep, you’ll be less concerned.

But then there is crawling. And baby-proofing the outlets. And making sure they don’t fall down the stairs. And cutting grapes into fourths. Toddlerhood is exhausting and all-consuming because you have to watch them or contain them every single minute. You worry that they’ll never drink from a sippy cup, potty train, sleep through the night, give up the pacifier. Surely, when they’re older – when they don’t physically need you as much, when you can go to the bathroom by yourself for the love of God – you won’t worry so much.

Those worries do fall by the wayside. I mean, I haven’t cut a grape for my kids in years – these days, they even cut their own steak. But the old concerns are replaced by new ones, and these problems are a lot more complicated.

More to the point, I can no longer fix them. 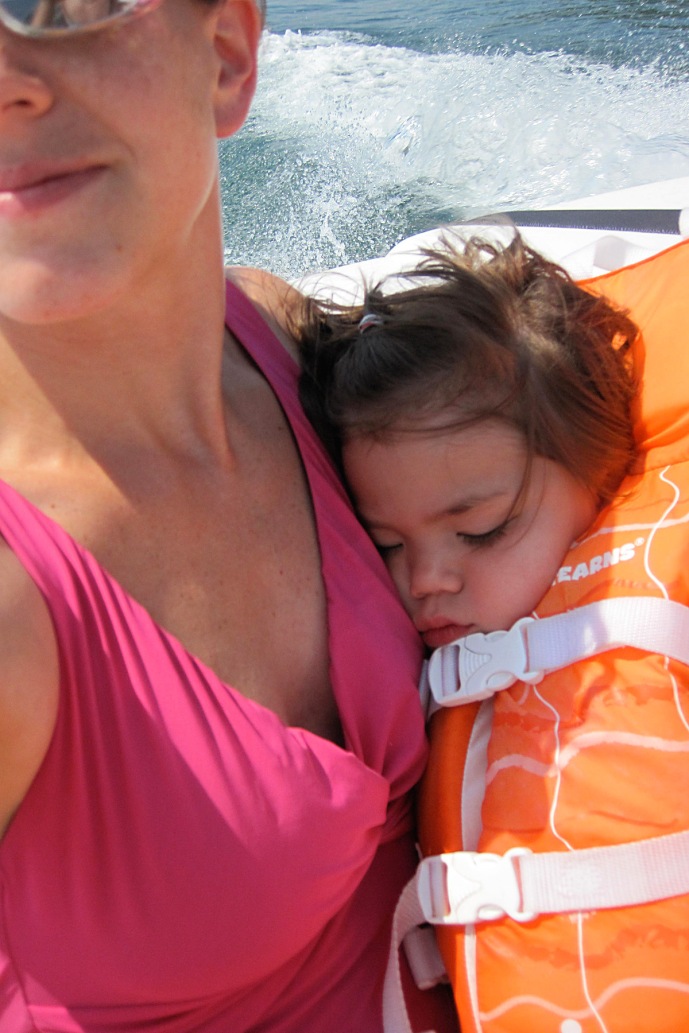 Me and my best little girl, Annie, age three.

Immediately before I exchanged Facebook messages with my friend, I’d been collecting myself after tucking Ella and Annie into bed. I’d closed my eyes and sorted through what I wanted to tell Nick – who is out of town – about how worried I am about the things that are bugging them, how worried I am that I have no idea what the heck to do, how freakin’ hard this parenting stuff is. After reading my friend’s words, I wrote back to tell her that I understood… but that we never, ever stop worrying – about our kids, about ourselves as parents, about whether we’re doing it right or enough, about how much their future therapy will cost.

When do you step in? When do you let them figure it out on their own? When they’re bumping into things, do you redirect or do you just let it happen? What do you do when they ask for help? What do you do when they don’t ask for help? Why are little girls so darn hard on one another? Why is friendship so difficult to navigate? How do you not laugh when your child lists the things that are overwhelming her – including seemingly fun stuff like playdates and parties – and says she’s “just falling apart”? How does your heart not break a little, too?

I called my mom and told her that I don’t think I’m up for this. I feel completely unprepared and unskilled; I don’t know how to be the parent my children need me to be. I asked her all of my questions and, after allowing me to ramble and sniffle and sigh, she gave me a wholly unsatisfying answer: Just be there.

Just be there. Listen. Be their ally. Hug them. Offer ideas when asked. Ask questions that help them form their own conclusions. Support them. Love them to pieces. Be there, always.

But, beyond that, they need to figure all of this — life — out on their own.

Damn it. I think my mom is right. THIS PART OF PARENTING SUCKS, Y’ALL.

I think I’m a pretty damned good mother, but the truth is, I really don’t know how to do this. Thankfully, I’m learning – day by day – to listen to the people who do know: Annie and Ella. They know themselves. They know what they want and what they need. Yeah, they don’t always know how to express those needs and wants (hell, a lot of adults don’t know how to do that), but if I give them the chance, they can almost always figure it out – sometimes with my help, sometimes alone. But it happens… I just have to let it.

I have a strong feeling that I’ll never stop worrying (although I hope I don’t lose too much more sleep) – about them, about me, about us. I’ll make mistake after mistake and apologize over and over again and hope, with everything in me, that they accept my apologies and still trust me. Their path is theirs to walk – but you can bet your bottom dollar I’ll be here… cheering them on, biting my lip, banging my head, arms open wide.

I’m still shutting the bathroom door, though. That “me” time was hard won and I’m not giving it up anytime soon.

Also, I’ll definitely be here when we get to try free soda. Ba-BAM!

* Yes, the title references “Bob The Builder” – a children’s television show I’ve never actually seen but whose theme song I somehow know. THIS IS WHY MY BRAIN CANNOT STORE IMPORTANT INFORMATION – it is full up, you guys.