I had a moment on the playground today.

I volunteer as a helper a couple of times a month and this morning, as I watched the second graders run by in their half-constructed Halloween costumes (their parade was this afternoon), it was as though I was actually seeing one of those uber-fast time-lapse sequences that are shown in movies whenever the director wants to particularly toy with your emotions.

And I saw Ella in her costume in second grade – and kindergarten and first and third and fourth – but, like, actually SAW her in my mind’s eye, tromping confidently in the Halloween parade. Glowing Skeleton! * change scene * Maleficent! * change scene * Snow Queen! * Ice Witch! * Bellatrix! *

They flew by in an instant, melding into one another in a faded blur. And then, in my head, I heard the voice of our neighbor – one of Ella’s closest friends – telling me how excited she is for Halloween but how bummed she is, now that she’s in sixth grade, that her school no longer has a costume parade.

The realization hit me with actual force. I felt it, somewhere deep in my stomach and my chest: This is Ella’s last Halloween parade. This is the last year that I’ll see her stroll by with her friends, laughing with her teachers. The last year I’ll hug her each month as she runs across the playground to join her friends. The last time I’ll be able to volunteer in her classroom, get to know her teachers, drop by just to see how things are doing.

She will be in a new school, middle school, navigating it on her own. We’ll know what she wants us to know and will see what she brings home, but beyond that, we will be largely in the dark; the window I now have into her days at school will become a door, maybe even a wall. Which is exactly how it’s supposed to go, this Growing Up and Maturing thing.

But somehow, in that moment on the playground, watching the little ones squeal and climb, remembering how Ella used to do the same but now would rather just talk with her friends than play, these past five years came barreling into me so hard and fast, I had to collect myself before I could resume my responsibilities.

Last week, we flew to Las Vegas for my brother’s wedding. It was a wonderful trip but unfortunately, Annie wound up not feeling well in the middle of it. She and Nick headed back to the hotel to rest up before the rehearsal dinner, leaving Ella and me with a few hours to explore part of The Strip. I’d been talking for weeks about bringing the girls to see some of the hotels – the roller coaster at New York New York, the tigers at The Mirage, the Bellagio fountains, the decor of Paris or Caesar’s or The Venetian – and they had responded with mild enthusiasm. Now that my words had become reality, Ella was unconvinced that she would enjoy herself; perhaps it would be more fun back at the pool.

Seeing as how I didn’t want to drag her from hotel to hotel if she wasn’t into it, leaving both of us miserable, I searched for the right way to phrase it so that maybe she’d acquiesce. It didn’t take long for me to find the perfect olive branch: “How about we go shopping?”

My girl loooooves to shop. Not necessarily to buy things (although she likes that, too), but just to look, to see, to hold trinkets up close and examine how they work, to pick up clothes and feel how the fabric falls between her fingers. And so we window shopped, marveling at the French-inspired “streets” in Paris, devouring a banana and Nutella crepe, looking with awe and horror at the absurdly high-end shops at Caesar’s.

I’d asked an employee when the fountains at the Bellagio would be going off, so I positioned us at the water’s edge just moments before the show began. I commented to Ella that everyone had their cameras out; she, in turn, asked for her iPod and began videoing the performance. The fountains were set to Andrea Bocelli and Sarah Brightman’s “Con te Partiro” and they followed the melody accordingly – lightly swaying, gently rising. Ella seemed to be paying attention but not really thinking too much of it. 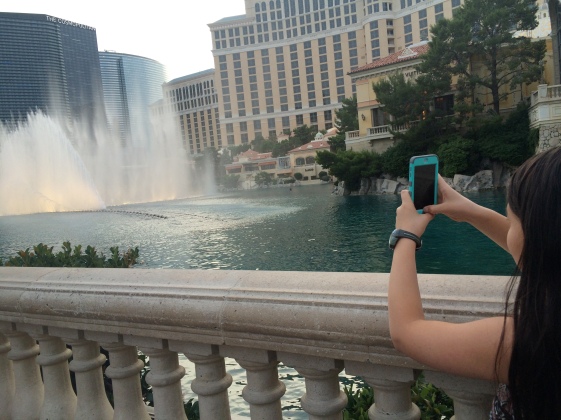 Then, the voices came together and the music rose and crested and the fountains soared into the air. I looked over just in time to see Ella’s jaw literally drop. It was comical, really, the absolute stereotype of shock and absolute awe. Her joy and astonishment were practically tangible. I didn’t know what to do for the rest of the show – watch the fountains or watch my girl watch the fountains. 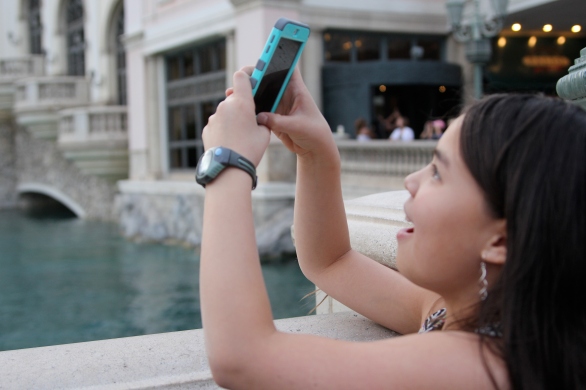 I know it’s blurry but I don’t care – I was too busy trying to capture her glee to bother to refocus.

I loved every bit of the (less than) five minutes of the show. I loved walking with Ella through the hotels, contemplating which souvenirs were worthwhile, imagining what the rooms were like. I loved strolling The Strip with her, giggling at the ridiculous outfits, admiring the architecture, stopping to take in street performances. We took a cab to the restaurant for the rehearsal dinner, sharing sideways glances about our driver’s cringe-worthy braking. Together, after talking with several employees of the large mall, we figured out where the dinner was being held… and then she was off, visiting with her grandparents, talking with her uncles, checking in on Annie.

But for those few glorious hours, we two took on Vegas. That Ella is old enough now to be a genuine shopping and tourist partner (albeit a short one who thinks heavily bejeweled iPod cases are to die for) is… incredible. I cannot wait to see what her future – and my future with her – holds. 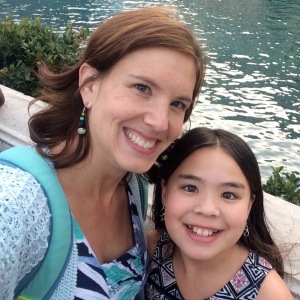 I know this is all going just as it’s supposed to. She is growing up and I am enjoying it, really and truly. Each age is better than the last; I don’t miss her being little, don’t yearn for the days when shoe-tying was a major affair and there were tantrums thrown because the lunchtime cup wasn’t the right one. I love being able to reason with her, to share a joke, to use sarcasm, to have fascinating and interesting conversations.

It’s just that every now and again something comes along to remind me of the lightning speed at which her Growing Up is happening and I have to deep breathe on the playground and stop the tears so the second graders don’t think something catastrophic has happened near the monkey bars. My friends who’ve done this – whose children are older than mine – tell me it will all be okay. Yes, there will be hard times, times when maybe I will, in fact, long for lunchtime cup tantrums… but it will be good. She’ll just be an older version of the Ella she is now, and our relationship will grow and change to match.

I know this.
But still.

Today was Ella’s last Halloween parade. It was chilly but there was no rain; she was psyched to don her Luna Lovegood (of course) costume, the one that she designed herself, and walk with her friends and teachers, past the hordes of parents. I watched her go and didn’t cry, not even a little. 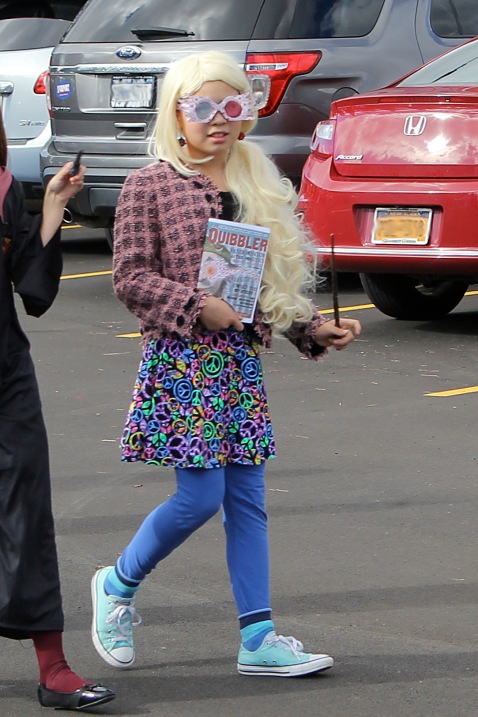 But tonight, I’m going to watch her video of the Bellagio fountains just so I can hear her catch her breath in the background. Maybe I’ll even watch it in slo-mo… just to take it in a little bit longer. 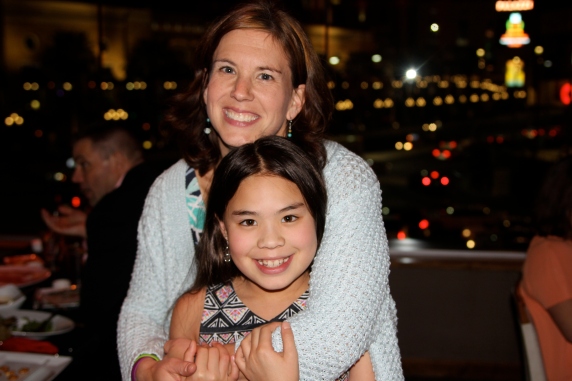