It was the squash soup that did it.

I thought I remembered how to make it – we’ve had it as an appetizer for the past five Thanksgivings – but I wanted to be sure. The recipe, however, was nowhere to be found.

I lost my shit.

Not just a little sniffle, but a full-on, body-heaving, gasping-for-air sob fest. ‘Cause this wasn’t just any recipe; it was one that Bill had given me years ago, his favorite. After it became a favorite of mine, I shared it with my grandma and it became a favorite of hers, too — so much so that, when we put together a video for Bill’s 68th birthday, my grandma’s well-wishes included thanking him for “that wonderful squash soup recipe.”

On Thanksgiving eve, everything came crashing down. The build-up of weeks of fear and sadness, the longing and the heartache. When Nick was, understandably, a bit taken aback to find me in hysterics over a missing recipe (“You can just email Mary! I’m sure she has a copy!”), I found myself explaining that although I knew I could, I didn’t want to… because I wanted none of this to be happening. I wanted Bill to still be here to call him for the recipe. I wanted my grandma to still be here to call her for the recipe. And, by God, I wanted her to still be here for Thanksgiving. The very thought of celebrating without her, of allowing these holidays to pass without sharing them, was more than I felt I could take.

I miss my grandma so damned much.

About a month ago, I had one of those Ah-Ha moments. Nick, the girls, and I were hanging out and Annie was telling a story… and I suddenly realized that, although I’d been standing there, smiling and nodding and probably even laughing, I hadn’t really heard a word that she’d said. It was as though I’d been floating above her, above all of them, detached — there, but not there.

In that moment, when I snapped back into focus, I realized what this drifting detachment must be:
Depression.

The same faceless but ruthless enemy I’d battled in 2009, the one who’d been trying to claw its way back into my life ever since but who I’d successfully held at bay… was back. Upon further reflection, I became aware that I’d been feeling this way for months – since the beginning of the summer, really. (I suppose that losing so many people – Angel, my grandma, and Sara – in such a short period of time can do that to a person.)

It explained why summer had been “just right” instead of too fast or too slow or too anything: in reality, I’d distanced myself from summer entirely, so it was… fine. It explained why, despite the countless amazing things in my life that should have had me walking around with an “I’m All That And A Bag Of Chips (Preferably Doritos)” sign — traveling, family weddings, healthy children, my 40th birthday (holla!), the gloriously decluttered house — I still didn’t feel joyful.

Happy at times? Sure. Grateful? Hell yes. But genuine elation, something better than merely happy? Nope. If my emotions had been charted in one of those line graphs, the line would have remained remarkably flat.

As soon as the lightbulb turned on, I was relieved; I’ve battled this a-hole before. Let’s do this. And then I was pissed. For years now I’ve been preaching about how important it is to be open about depression — and I didn’t recognize that I, myself, was depressed?? WTF? Plus also, I was mad as hell that all of these great things were happening and I wasn’t able to fully enjoy them. DEPRESSION, YOU SUCK.

I’d been going with that assumption for a few weeks – that I was facing another bout of depression – when my Facebook timeline linked me to a blog post I’d written after Bill’s death. At the time, I’d felt kind of insane — soaring highs and crashing lows — until my therapist informed me that it wasn’t insanity; it was grief. All of the highs and lows, the near-obsessive drive to do and keep busy, were actually part of what fancy-pants psychology folks call Manic Defense.

I was protecting myself from my own grief by trying to be wildly active, then falling down when the sadness caught up with me.

Upon reading the post, it occurred to me that maybe I’m not depressed because I’m mourning those who are no longer here. Maybe I’m simply mourning and just having a helluva time with it.

I asked my therapist about it the next time we met, saying that I wanted to write about The Return Of My Depression — that I feel it’s really important to do so, that I think it’s critical that we reach out and let others know they’re not alone — but that I also thought it was pertinent that I be honest and identify things correctly. Is this depression or is it grief??

After listening, my therapist gently assured me that I’m grieving, not Depressed. She then mused that I should write the post anyway – because depression and grief can feel remarkably similar and we, as a people, are terrible at dealing with both.

Last Christmas, my grandma insisted that we make some pinecone wreath she’d seen in a catalog. It nearly did me in, but we succeeded. The wreath is now hanging in our front hall.

So that’s exactly what I’m doing. I’m putting this out there because we are awful at handling all of this messy feelings crap, especially if it makes us sad. When someone dies, we’re expected – we often expect ourselves – to “get over it,” to reach this magical place, cross some invisible line where, finally, we will feel better. All of the steps have successfully been taken! The grieving was done! It is now in a box over there and we are moving forward! Hurrah!

Staying with someone in extended grief is absurdly uncomfortable. It’s been, what? Three months already? Six? A year? And you’re still sad? Ugh. No one wants to live in that world, so we avoid it. We don’t ask questions. We don’t talk. We don’t share, because no one wants to hear it.

(I’m hardly immune. Two weeks ago, I was at the Y and noticed, from behind, a friend I hadn’t seen in a while. I remembered that she’d just lost her mother and the very first thought that ran through my head was: I need to go the other way to avoid her so we don’t have to talk about that. BECAUSE TALKING ABOUT GRIEF IS SHITTY. Thankfully, I got ahold of myself and deliberately sought her out to give her a hug… BUT SERIOUSLY. I SUCK AT THIS.)

Likewise with depression. Some people don’t get it at all (“What do you mean you feel depressed? But you seem so happy”). Still others do get it, at least to some degree, but they want it to fit into a tidy parcel that’s easily defined and overcome. Have you tried medication? Talk therapy? Exercise? Are you getting enough sleep? Are you making time with friends? Are you eating well? Are you getting outside? GREAT! You have officially treated your depression! All better now!!

Don’t get me wrong – all of those are important and can be keys to fighting depression – but becoming un-depressed isn’t that simple. Those gross, sad, blah, detached, scary feelings can persist for months or years, even with consistent treatment. But does anyone want to hear that you’re still feeling low three months down the line? Nope. Not so much.

Depression and grief are terrible. Among their worst faults is that they cause us to feel isolated. People tell you to reach out, to not keep it inside – but ironically, we often are isolated – because no one likes talking about depression and grief. No one likes hearing about it. We like to fix things; when someone isn’t “better,” when they’re still sad, it’s a total turn-off. No, thanks.

I’m really sick of it. I’m sick of not wanting to mention that I’m afraid of Christmas – afraid to put up the decorations that I inherited after my grandma died, afraid to trim the tree without her, afraid of looking over on Christmas morning and not seeing her sound asleep on the couch amid all the hubbub – because I don’t want to weird people out. I’m tired of us not talking about depression because it makes people feel uncomfortable. I’m tired of avoidance being the first thing that comes to mind when I run into a friend who’s grieving.

Please don’t misconstrue what I’m saying; if anyone is an Eeyore all the damn time, it’s a real drain. Even your bestest friends don’t want to hear the unhappy, negative stuff every minute of the day. But depression and grief don’t always fit into neat packages. They can’t necessarily be “fixed” no matter how much time has passed or what steps a person has taken – and that doesn’t mean there’s anything wrong with the person who’s still upset.

Grief and depression are normal parts of life – normal parts of living. Certainly, I work to compartmentalize my sadness – mostly because it can be annoying to be sad when I’m doing something happy – but it’s still there, commingled with the rest of things. It is fully possible to be missing someone so much, it physically hurts while also – at the very same time – absolutely reveling in the wonder of the present. Mourning and celebration. Depression and joy. Crappiness and awesome. They coexist together.

Negating or ignoring – or, worse, shaming – the bad parts doesn’t make them go away. It just makes them seem lonelier, which is really stupid because we’re all in this together.

So I’m going to try to be less worried about how other people feel when they hear I’m missing still my grandma. ‘Cause I miss her like crazy, and that’s okay. I’m also going to try to not be so uncomfortable around people who are depressed or grieving – or, at the very least, to still be there for and with someone even in my discomfort. I want my girls to know that my missing their Phoofsy doesn’t take away from my being ridiculously excited to decorate the tree with them; I want to show them that sadness isn’t something to be afraid of.

I just have to work on believing it myself.

As for the soup? After some sleuthing, I found an old email – hidden in the depths of my computer – that contained a copy. It was delicious. 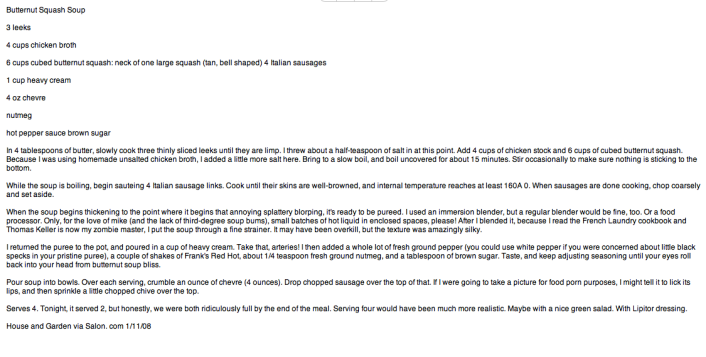 Click on it to see it in its glory. You’re welcome.

1 thought on “Giving Me Grief”