I knew that having a second child would change things. I knew instinctively that no two children are alike. But I’d never fully understood what it would mean to parent siblings until having Annie (funny how that works…).

As I’ve mentioned before, Annie’s pregnancy was not planned. To say that I was less than thrilled when we got the news is a significant understatement. Although I eventually grew excited for her arrival (it took 8 months, but I got there), it was a distinct kind of excitement because this wasn’t my first rodeo.

I’d given birth before. I’d held a freshly born baby on my chest. I’d cared for a newborn. I’d raised a baby into toddlerhood, the whole shebang: sleepless nights, leaky boobs, dirty diaper testing via bum-sniff, teething, sleep training, making bizarrely chipper noises while “zooming” lovingly pureed sweet potatoes into my cherub’s mouth (and then scraping at least half of it off her sweet potato-spackled cheeks). I’d oohed over head control and sitting up and pulling up and crawling and walking and talking.

I had this mothering sh*t down.
(HAHAHAHAHAHA. I know. I KNOW.)

Perhaps the first clue that Annie, and my relationship with her, would be different from Ella was when she became stuck in the birth canal and I gave birth via emergency c-section. Instead of holding my freshly born baby on my chest, I stared at her from across the operating room as Nick stood beside her and declared that she was definitely an Annie (not a Katie, our other contender). It took hours for me to finally have my baby in my arms and once I did, I didn’t want to relinquish her (in part out of new birth haze and in part because lifting her up out of the bassinet hurt my stitches).

The next clue came immediately; I’d been expecting it, but it hit me hard nevertheless. As I cozied up with baby Annabelle at the hospital, Nick returned home to nearly two year-old Ella. When she came to visit the next day, I remember being so overwhelmed, I could hardly stand it (yes, a lot of that was probably hormones, but whatever). Because of my surgery, I couldn’t pick Ella up; it devastated me. Seeing how much I wanted to hold her, Nick (or one of her grandmothers) lifted her onto the hospital bed beside Annie and me. I had prepared for this – for loving two children with the very same heart that, a day ago, had only loved one – but it felt so unfamiliar. Not bad; not hard; just uncharted territory. Despite my emotional pep-talks, I was unprepared.

As the oldest of our siblings, Nick and I have only experienced what it’s like to be a firstborn. We both share that stereotypical firstborn trait of Doing Things The Right Way, of Following The Chosen Path. We play by the rules and we expect others to do the same. Growing up, I was always a bit mystified by my friends with older siblings. They were constantly playing catch-up; someone else went to middle school first, got braces first, drove first, left for college first. Like nearly all eldest siblings, I was the leader and the guinea pig, all in one. I knew nothing else.

Ella is, in many ways, a stereotypical firstborn. She, too, likes to Do Things The Right Way (and finds it irritating when other people don’t). I absolutely relate to this. The sign says No Parking, so don’t park – yes, we’re talking to you (except not really ’cause we hate confrontation). The rules say that your knees must bend naturally at the edge of the seat in order to be safe, otherwise you still need a booster; OMG SO MANY PEOPLE ARE UNSAFE. This is not so hard, you guys!! Ella and I are so in sync on this.

Whether due to birth order or personality, or simply because I’d already had (nearly) two years to get to know her, I knew I’d be empathetic toward Ella once her baby sister arrived. I’d grown up with a younger brother; I understood the challenges of sharing, of having someone pester you when your friends came over, of a little sibling continuing to make faces in the car after Mom had told us we weren’t even allowed to look at one another anymore. And so, when Ella was confused and jealous after Annie was born, I was ready for the pang of recognition and empathy.

I didn’t expect to feel that way about Annie.

Yet I did. If Ella wanted my attention while Annie was being put down for a nap, I made sure to finish up with Annie first – not out of obligation, but because I genuinely felt a tug on my heart. As they grew a little older and Annie began reaching for Ella’s toys, I empathized with Ella’s frustration that her little sister was all in her business… while simultaneously empathizing with Annie’s desire to enjoy the same fun stuff as her big sis. When Ella needs space but Annie wants to play, I can almost physically feel my Mama heart encompass Ella’s desire for alone time and Annie’s desire to be with her sister.

Although I hadn’t planned to, like, give Annie the shaft after she arrived, I simply assumed that I’d instinctively understand Ella more.
It hasn’t worked out that way at all.

From the moment Annie was born, I’ve been just as fiercely empathetic toward both of them. It’s been a fascinating and unfamiliar experience, putting myself in the shoes of the younger sister. The seeming injustices that were endured as an older sibling are now seen through both the big sibling’s eyes and the little one’s, and I find myself growing maybe a little wiser (and needing more wine) every time. 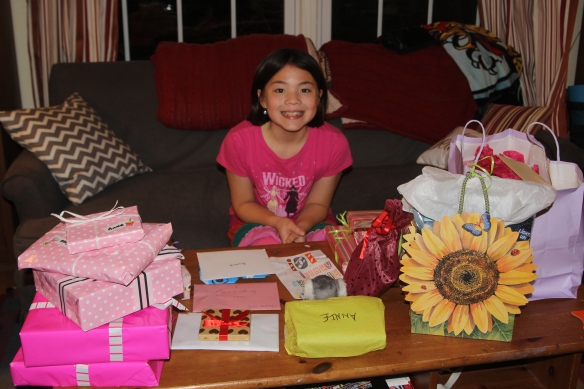 Annie’s birthday was yesterday, and she could not wait to be ten. Double digits! The big time! I’d worried that her hitting this milestone might make me wistful or even sad; can my youngest daughter really ben TEN?! Instead, I just felt happy that she was so excited. Perhaps that’s because, in many ways, she acts older than her years. She makes dinner, she does her homework without being asked, and I’m pretty sure she could pick a lock if she needed to (or, heck, if she were bored). But also it’s just been a really fantastic experience being her Mama, so rather than being upset that she’s hit a new decade, I’m thrilled to see what her coming decades will bring.

This isn’t to say it hasn’t gone by in the blink of an eye. Last night, we watched the video I made for her first birthday and I cried more than once – some for the people we’ve lost, but some for just how viscerally I remembered the way she used to watch Dora; when she crawled for the first time; how she fit in my arms. It’s so, so fast, this growing up business.

But if the next ten years of Annie are even half as marvelous as the first, it’s going to be worth it, no matter how fast it goes.

Happy 10th Birthday, Nini. We adore you so.

She got this light-up skirt for her birthday. Pretty rad.