Yes, it’s true. I’m on a flight, heading back to Minnesota, updating this blog from 30,000 feet. Technology, you sexy vixen, you.

Yes, it’s also true (for those of you who have been keeping track), that Ella, Annie, and I returned from Minnesota a mere 48 hours ago. Nick is the frequent flier in the family, not me, and my immediate return to the land of 10,000 lakes is not for pleasure, nor for business, but borne out of necessity and love. Without being ridiculously vague, I will simply say that our family is going through a very difficult, private matter, and we have been traveling a lot lately. I have been asked to discuss this in future posts, but for now, it is enough to say that I need to be on this plane, to travel across the country once more over these cotton candy clouds, to be by my husband’s side. 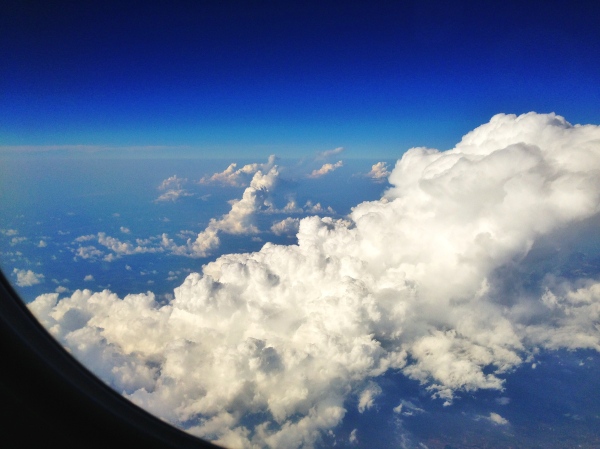 I also decided, given that the cost of an emergency cross-country ticket is already larger than a mortgage payment, a tiny splurge would be appropriate, and I needed – for the first time ever – to purchase a first class seat. Yes, needed. I felt it in my bones, just how I knew our current house was the right one for us (despite having never set foot inside before purchasing it) or how I knew that Milli Vanilli was too good to be true. When you know, you know. I needed first class.

Thing is, despite flying at least a half-dozen times a year myself, first class and I are not exactly familiar with one another. Have you ever seen Big Business, the 80s comedy with Bette Midler and Lily Tomlin where they play twins (each named Rose and Sadie) switched at birth, with one set growing up in the country and the other in the city, and then the country twins show up in the city and act like the bumpkins they are, ogling the sky scrapers and taking about “Goin’ to the meetin’”? No? Well, you’re not missing much, but the point is that right now I am country Rose and Sadie, and first class is my meetin’, it could not be more obvious that I am not in my element if I taped my Disney World “First Visit!” button to my forehead.

As is absolutely typical of me, I arrived at the airport later than I’d planned, which made me more disheveled than usual (although, considering it’s Rochester and the airport is totally small and manageable and I had first class priority – can I get a what what! – it took me a mere twelve minutes from the time I stepped foot in the airport to go through security and arrive at my gate). Still, I even found time to purchase my travel standby – a bottle of water – and sauntered onto the plane feeling quite smug… until I saw the lovely mini water bottle waiting for me at my seat. 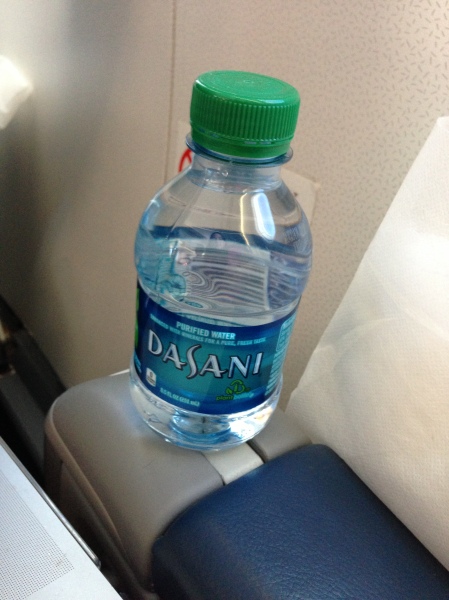 You get water bottles in first class. Who knew?!

I was aware, of course, that you get free drinks in first class, and I decided to take advantage of that immediately. I asked what white wines were available, and the lovely flight attendant immediately brought me two bottles for my perusal, including my favorite, Pinot Grigio. 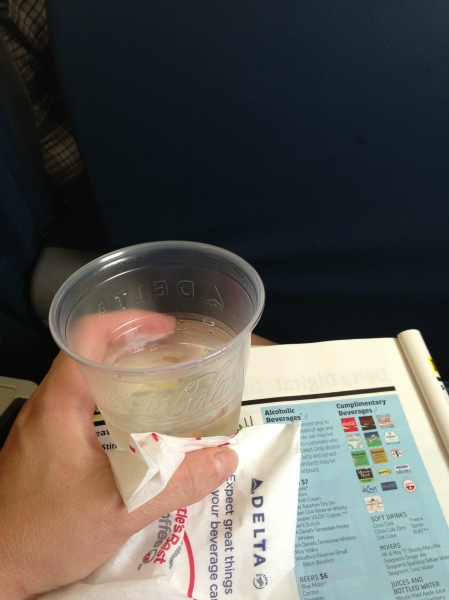 I know it’s not actually possible to drink your troubles away, but hey, this isn’t a bad start…

What I did not realize is that the lovely flight attendant would serve me the wine in the plastic cup rather than in the mini wine bottle, which meant that I reached out and tried to take the bottle from her, resulting in a very awkward tug of war across my seat mate. Keepin’ it classy.

After receiving my wine, I made myself comfortable, doing the crossword in the Delta Sky magazine (yes, I’m that geek) and adding items to my never-ending To Do book. I vaguely registered that someone was standing in the aisle, talking, and paid her no attention – because who would be talking to me – until my seat mate gently tapped me on the arm and I realized that the “someone” was the lovely flight attendant, and the “talking” was actually her saying, “Ms. H? Ms. H? Can I get you a beverage for after we take off?”, which totally weirded me out, because since when do flight attendants refer to you by name? Considering that I had downed the Pinot before the plane even left the ground (truly so unlike me, but hey, desperate times, right?), I decided that perhaps a Diet Coke would be more appropriate for my second drink.

Although I have flown first class once or twice before, I have never done so alone, meaning that Nick has always helped me navigate the ins and outs of the seats. This may sound unnecessary – they’re airplane seats, after all, how complicated can they be? – except that the tray tables don’t fold down from the seats in front of you like they do in coach; they magically rise up from the armrests and fold across your lap. When the flight attendant brought me my Diet Coke, I nonchalantly attempted to pull the tray table up and out of the armrest, because I have so done this before, especially one-handed while holding a drink that’s in a cup made out of glass instead of plastic, this is no big deal, I have totally got this… Until my armrest wrangling and Diet Coke sloshing became so disruptive, the gentleman beside me pulled out this nifty little tray thing and said, “Why don’t you just put your drink here?” 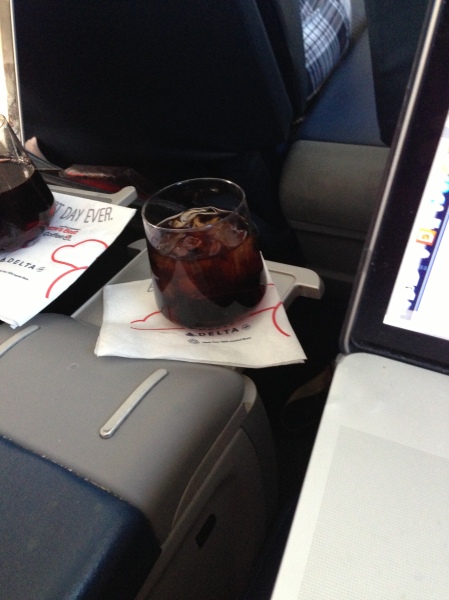 Mini drink holders! How cute is that! First class, you are so clever!

You totally know this guy is thrilled to be sitting next to me.
Especially because I thought it was so awesome that the lovely flight attendant offered us snacks, including a banana, I decided to take a photo of it. A photo. Of my banana. 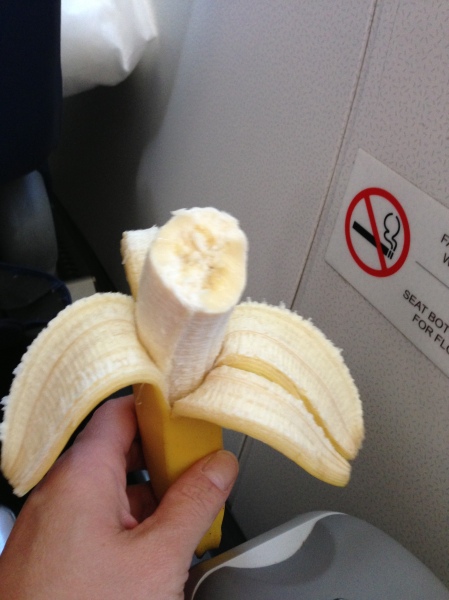 They really let anyone into first class these days, don’t they?

I also chose a little bag of peanuts, which I decided not to photograph because, hello, boring… But that’s kind of a shame because, as I opened them, they flew across my keyboard and skittered onto the floor below, so now I can never document my bag of first class peanuts. If only they had popcorn, I could really make a good showing. The cleaning crew will really appreciate the work I’ve done here.

When the lovely flight attendant came around again asking me – by name –  if I’d like anything else to drink (good grief, they are so attentive up here!), I decided to get my mortgage payment’s worth, and ordered a margarita. This may ultimately wind up being a bad idea, but I have  both a) successfully used the little drink tray and b) finished the drink without spilling, so that’s something, anyway. 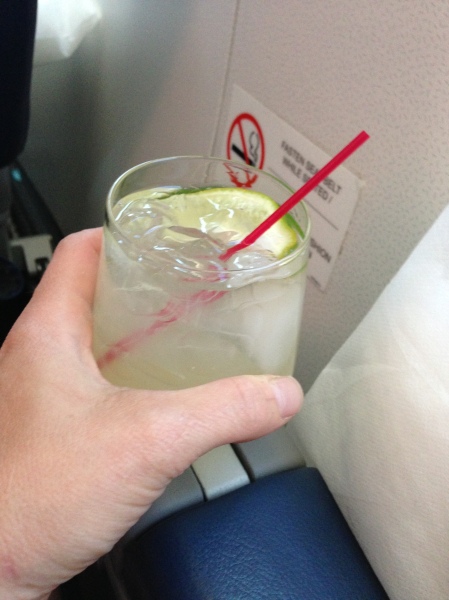 We still have an hour to go in this flight, so only time will tell what other disasters adventures I will encounter, but so far, first class has certainly proved to be an enlightening experience.

In a few days, I’ll be flying coach again, but for now, I will sit back, enjoy the Great Lakes out my window, and try to not act too much like Julia Roberts in Pretty Woman when she first encountered the opulence of Richard Gere’s life. 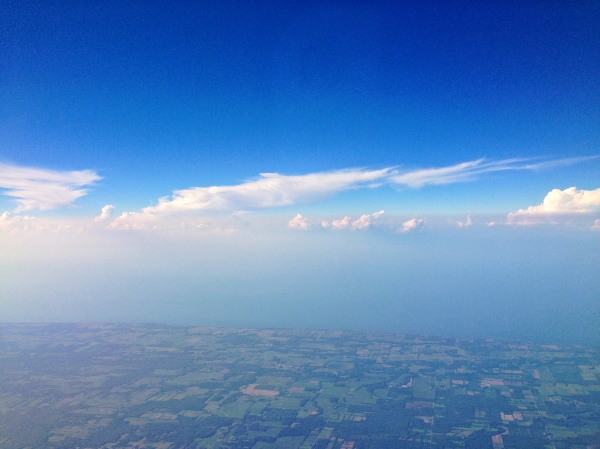 On second thought, feeling like Julia Roberts, even for a moment, isn’t such a bad thing. Just this once, I want to forget it all, and feel like Cinderfuckin’rella.

p.s. Did you know that the seat pockets in first class are held on by velcro? And that, if you root through your enormous backpack mid-flight and then attempt to put said bag back under the seat too vigorously, you can peel the velcro entirely away from the seat, resulting in all of the contents — including the in-flight magazine, barf bag, Sky Mall magazine, safety card, two water bottles, a camera, and an iPad — to fall out onto the floor? Well, consider yourself warned. You’re welcome.