For the past five years, on the day before school begins, we’ve had an official family Last Hurrah. It’s never anything particularly momentous (last year, we got ice cream; two years ago, we went on a hike), but it’s a way of putting a parenthesis around the end of summer, giving us one more opportunity to have some lazy, delicious fun before the       predictable routine of fall gets underway.

This year, we’d already planned to go out for dinner tonight, and asked Ella and Annie if they’d like to declare that our Last Hurrah. WRONG. Wrong. Very, very wrong. “Um, Mom, it’s just eating food out at a restaurant.” It seems that their idea of “lazy” and “delicious” fun diverges slightly from mine. And also requires more actual parenting and stuff. Damn it.

When asked what they’d like to do for their Last Hurrah, the girls mulled over several possibilities (painting nails? going to a waterfall? doing a craft?) before settling on the most obvious choice: making something with wood. Because, duh. Who doesn’t want to Make Something With Wood to mark the end of summer?

And so we found ourselves at The Home Depot, waiting patiently for the orange-aproned helper man to saw ten-foot boards into 6″ and 12″ segments.

Once home, the girls enlisted our neighbor (and one of their best friends) in their scheming, and immediately got to the work of Making Something With Wood. Edges were sanded…

That pile of wood pieces is still in the garage. Thank God it’s still warm enough to park the car in the driveway.

No fingers were harmed in the Making of Something With Wood.

Yes, the little “shelf” in the back does take after Pisa.

And, a few hours later, they proudly displayed their creations:

A “shelf” for our neighbor’s soccer awards. I hear she’s got four trophies she’d like to put atop these boards. That should be neat.

Annie’s “little table” for holding “little parties.” Paint on the garage floor is just for kicks.

There was much grumbling as we pulled them away from their workshop so that we could head out for dinner (“But the legs aren’t painted yet!!”) until I assured them that tomorrow, after school, if they actually make it through the first day alive and still have the energy to pick up the paintbrushes and hammers, they can finish their projects. Won’t that be fun.

Nick and I decided that our version of Last Hurrah would take place at The Melting Pot, which, although the opposite of “lazy,” was certainly a delicious end to summer. 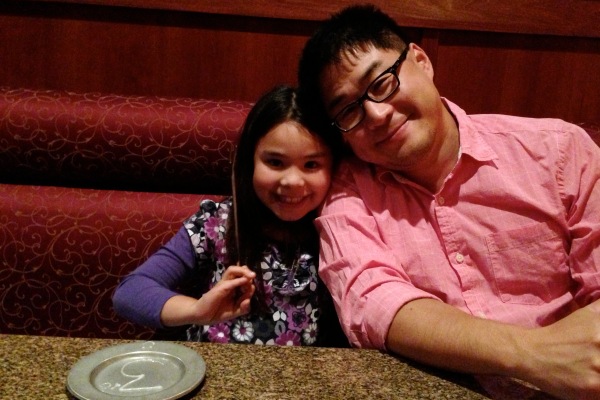 We had a particularly awesome server who asked – twice – what grade the girls were going into, and then presented them with dessert plates displaying said grade.

First grade or bust! En garde!
Except I kind of mean it. I hope Annie’s teacher got a good night’s sleep.

Okay, if I’m being honest, I think it’s pretty damn cool that our girls chose to bash hammers into nails and Make Something With Wood. I love how they’re not afraid to get down and dirty, how the allure of pounding something to smithereens is difficult to ignore, how they don’t hesitate to make a shelf even though they have no idea what they’re doing, how little they care that the shelf is so lopsided the trophies will probably slide right off, and how awesomely they use their imaginations. They looked at fall’s fast-approaching sunsets (um, how is it already almost dark at 7:30?!?!) and said, HELL NO!, and gave summer one last fabulous go.

Their backpacks are waiting by the front door. Their carefully-chosen clothes have been laid out. Water bottles have been filled. They’re ready. Tomorrow, they’ll head off to school, eagerly anticipating what this year has in store.

Personally, I’m hoping for a few lessons in geometry and physics, because if I’m getting a “shelf” for Christmas, there’s definitely some room for improvement.