Sometimes, things don’t go the way you’d planned or hoped. Maybe your expectations were too high, or the circumstances just don’t pan out, or something goes wrong.

Other times… It goes exactly the way you’d imagined.
Amazingly, our Christmas was one of those times.

My dad and stepmom – Papa and Grand Meg – joined us for the fourth year in a row, and although they were accosted by the girls the moment the came in the door (and barely made it home in one piece, having been thoroughly climbed on, jumped on, hugged, shouted at, danced with, and sat upon for the past three days), it was, as always, a marvelous way to spend the holiday.

We got ready for Santa. 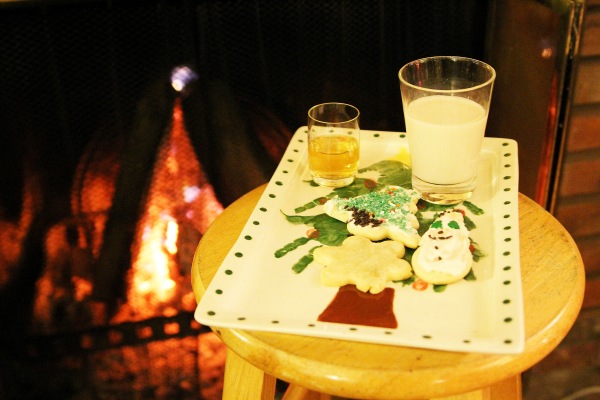 What? Santa doesn’t get cookies, milk, and whiskey at your house? PITY.

Apparently, the whiskey went to his head…

And brought Annie and Ella just what they’d asked for. 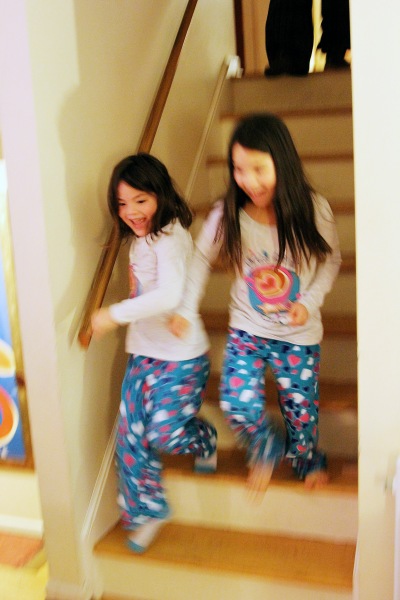 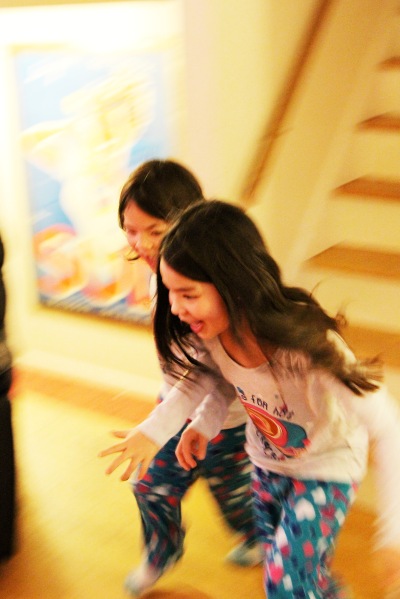 In our house, we eat a big ol’ Christmas breakfast before digging into the bulk of our gifts – but, to keep the Ella and Annie sane, we let them open a few presents in advance of the rest. For the third year in a row, the girls requested that the first gifts they open be the ones they’d picked out for each another.

They were a hit! 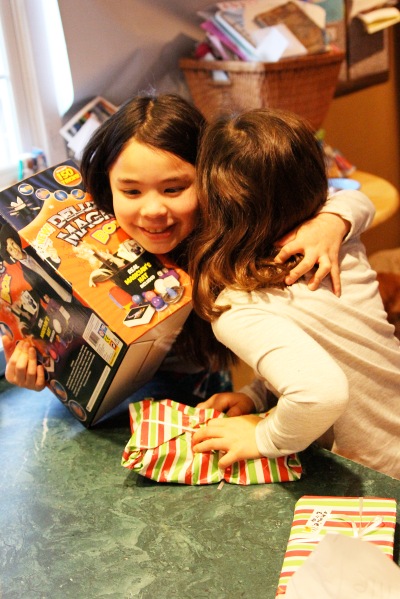 Not to be outdone by a guy in a red suit who breaks and enters, Nick and I had a few gifts up our sleeves – including Harry Potter wands.

The girls were…
well, these speak for themselves. 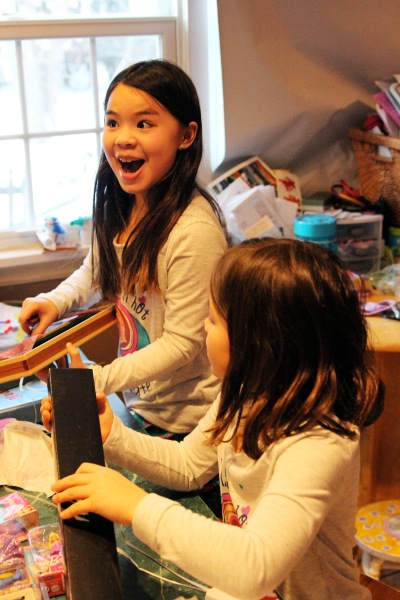 (These are the best pictures ever, are they not?) 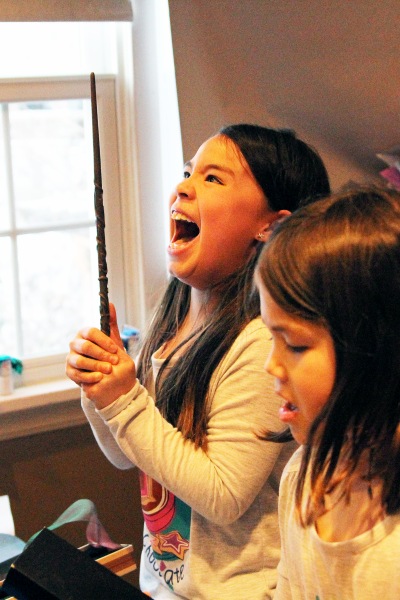 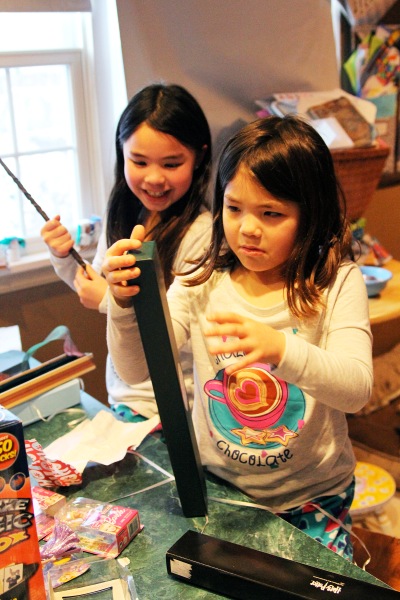 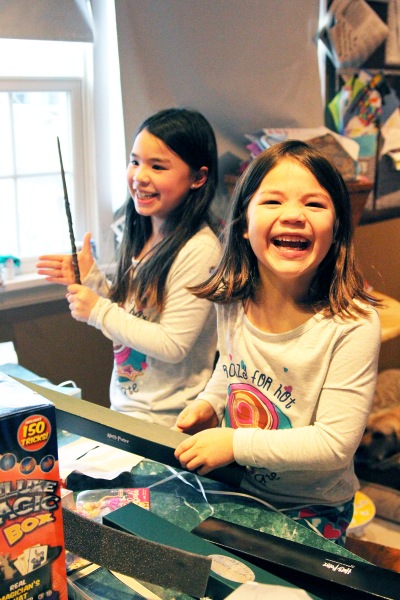 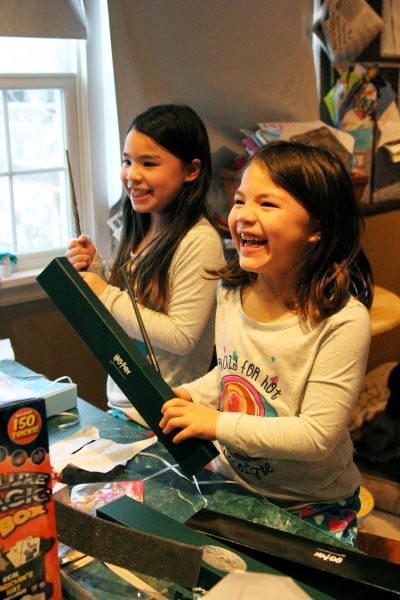 A couple of weeks ago, Nick had mentioned that he and his siblings had played a game called Trac Ball with their dad when they’d visit the North Shore of Minnesota. Lo and behold, Trac Ball still exists – and it so happens that it’s a blast.

Not sure why I have no photos of Nick playing Trac Ball… but my dad took Ella on this morning.

Grand Meg plays to win, yo!

I won’t bore you with the details… but the rest our Christmas was pretty damn fine. 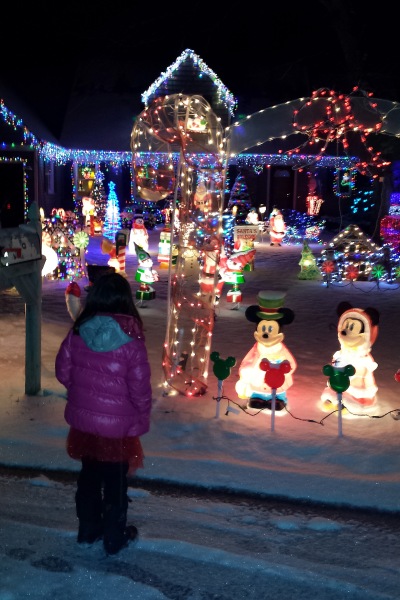 Don’t mind Annie’s nervous smile; we were in the middle of a lake effect snow squall and the flakes were really flying.

It wasn’t entirely sunshine and unicorns. Annie has a cold, Langston ate the entire wedge of brie right off the coffee table, we missed Bill an awful lot, and the lasagna I’d so carefully made ahead of time (so that we could just pop it in the oven on Christmas day and eat it 90 minutes later, no fussing or fretting necessary) might have not really cooked so well, leaving us with delicious sauce and lasagna noodles that were still crunchy. Oops.

But it was still pretty fantastic.

This year was a really good one. Magical, really.
Hoping yours was the same.

My BFF, Kiki, sent us these Harry Potter glasses with the instructions that they were for “the entire family, even the dogs, with the hopes of a PHOTO!” How could we not oblige?

Side note: not sure whey I look like Professor Trelawney.
Side note two: Jambi totally rocks the glasses Very studious.

* That is, when they’re not crying or hitting one another or ripping through the packages so fast, you’d think they were competing in an opening contest – five year-old Annie, I’m looking at you.

** Thanks, Grand Meg, for sharing some of your photos!

5 thoughts on “A Very Harry Christmas”