Greetings from the highway.

Two days after our truly magical Christmas, we’re off to begin the second half of our holiday festivities, this time visiting my mom and stepdad in Westchester County outside of New York City, where we used to live before we moved to Rochester. And, due to the wonders of modern technology, I can actually write about it live – from my computer, not my phone. I know you’re thrilled.

Nick and I have a long history of road trips together, starting back in college when we thought it was no big deal to jump in a car and drive five or six hours just because, and continuing on our trips to Colorado and Minnesota, plus literally dozens of sojourns around the Northeastern USA. Many of them come off without a hitch and fade into a blurry mesh; others are much more… memorable.

There was the time, as college students, when Nick and I were visiting my family’s condo in Okemo, Vermont and decided to drive to Montreal – a good eight-hour journey – to see the Canadiens play. We left early enough to tour the city a bit, then scored tickets to the game that night. When the usher guided us to our seats, speaking in rapid French, we were to embarrassed to admit that we hadn’t quite understood what he’d said, so we  muttered, “Oui!” and hoped it would suffice. Disgusted, the usher glowered at us and reprimanded – in English – “You didn’t understand a word I just said, did you?” Um, nope. “Then why did you say ‘yes’?” Merd.

Newly married, we made a similar one-day round-trip trek to visit my BFF, Kiki, for her dad’s 60th birthday. My mom was out of town at the time, and we were watching her dog, a Sheltie named Jasmine, who got along just fine with our Madison. Knowing we’d be gone for, oh, fifteen hours or so – with no one available to let the dogs out mid-day – we opted to take both hounds along. Jazz was used to traveling in her crate, so we set her up in the back of the car, with Maddy chilling on her dog bed nearby. All went well until Mads got up to shift positions and a low, menacing growl emanated from the kennel; it seemed that Jazz didn’t so much like being cooped up in a moving vehicle with another dog encroaching on her territory, and began snarling viciously, snapping at the crate’s wire walls, each time Maddy so much as breathed. I managed to crawl over the seats and into the way back, where I draped a blanket over Jazz’s kennel to block Madison from her view, which worked nicely until we rounded a corner, and the blanket would slip, and Maddy would move, and suddenly it was Wild Kingdom all over again. The dogs were more than a little frazzled by the time we arrived in New Hampshire for the celebration. Surprise! Happy Birthday! We’ve brought dogs! Let’s party!

Come to think of it, we’ve done a heckuva lot of driving with dogs, from our cross-country disaster with Madison to taking our CCI pups with us anywhere and everywhere. On one such occasion, we had our first CCI dog, Diamond, with us as we again made our way to Vermont. About halfway through the trip, we began to notice this… odor… enveloping us any time Dizey stood up to circle and lie back down again in, in that dizzy-making way that dogs do. Yep, Di had gone into heat and was making a mess all over the floor of the minivan. Awesome.

Diamond isn’t the only one of us who’s had… trouble… in the car. Sure, we’ve had our fair share of kid-vomit moments, but those are a dime a dozen, no? More unique was the time we were driving with a potty-training Ella who desperately needed to make a pit stop. Careening off the highway, we looked for a gas station, restaurant, or anyplace with indoor plumbing, only to be met by the northern Massachusetts wilderness. We decided our next-best bet was to find a safe spot to pull over and have Ella let loose on the side of the road, but everywhere we turned, the road either had no shoulder, or we were in a residential neighborhood. As Ella’s pleading became ever-more dire, we finally found a field-like area and skidded to a halt. Vaulting out of the front seat, we undid her carseat buckles with lightning speed and placed her on the ground to take care of business, careful to hold her hands and help her squat down…

… when this man appeared out of nowhere. “What are you doing here?” Um, sorry, but our daughter really needed to go to the bathroom… “Well, you’re on my property.” Right. Our daughter is now peeing on your lawn. Super. Reeeally, really sorry about that. We’ll just clean her up and get on our way.

There was also the time when we were visiting my sister- and brother-in-law in Colorado, and Nick was working all day, so I thought it would be a good opportunity to drive the girls up into the foothills, because when you’re this close to the Rockies, you can’t not see them up close, right? Ella had said she didn’t really feel well – and, in fact, she did have a fever – but after a dose of Tylenol, she perked up considerably. By the time we’d cruised west out of Denver and were winding our way amongst the peaks of the mountains, the Tylenol had begun to wear off, and Ella started to fade. Not wanting to let this first-in-a-lifetime moment pass by, I found a spot with a beautiful view and had the girls get outside for a photo op. 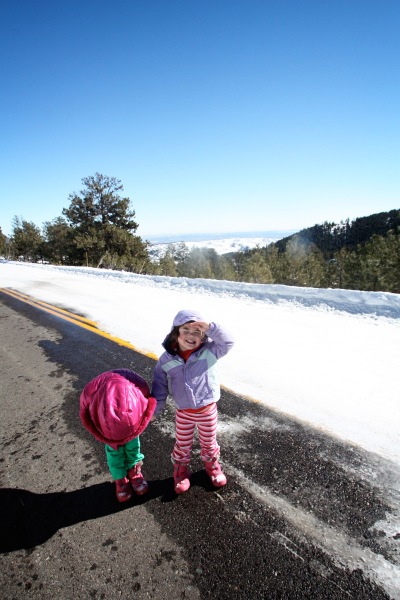 ARE WE HAVING FUN YET??

We flew home the following morning with the sickest, most feverish, vomiting, hacking kiddo, then raced her to urgent care as soon as we landed, where they immediately proclaimed she had severe pneumonia. But at least we have the photos.

Most of our road trips these days are taken with just the four of us (and our hounds), but occasionally, friends or family will join us. On one such occasion, when Ella was about two, we were dragging my sister-in-law, Emi, along with us, and things began to go south. Both of our kids have always hated being trapped in their car seats (you know how people say they’d go for a drive to calm their kids down? HAHA. I would rather take a 12-hour flight than a 3-hour drive with our girls), and have generally been miserable travelers after the first hour or so. On this particular trip, Annie was screeching like a banshee despite my attempts to calm her (ever tried to breastfeed a kid from a moving vehicle? NOT EASY, MY FRIENDS), and Ella – who was growing ever-more agitated with being stuck in her own seat and listening to her sister’s wailing – requested “Daddy’s song.”

And so Nick began singing “Faith” by George Michael, a song he’d sung to Ella countless times before, but whose lyrics he’d never really contemplated. “Well, I guess it would be nice… if I could touch your body… I know not everybody has a body like you…” Emi’s head whipped around so fast, I thought she’d injure herself. So this is how it is with your family. Not awkward at all.

Today, it’s just the four of us again – the dogs are happily home with our fantabulous house sitter – and, three hours in, it’s already been an adventure. The moment we closed the doors, Annie began watching newly-downloaded episodes of Sofia the First, oblivious to everything around her.

Ella, preferring to wait till halfway through the drive to watch the 6th Harry Potter movie, began chatting with Nick and me, laughing out loud about that time when every single one of us forgot something and we had to turn around and return only minutes after we’d departed. The chuckles had barely escaped her lips when Ella drew a startled breath and confessed, “I left my American Girl doll at home.” Another time, we’d have said too bad, but this trip, her brand-new, much-beloved doll might actually be… important… so Nick and I both took our own deep breaths as we turned that car right around. At least we were only twenty minutes from the house – let’s add forty minutes to the trip! It’ll be fun!

As we rounded the bend in the park near home, Ella poked her sister to show her the mushroom house, and Annie – still wearing headphones, looking up from her screen for the first time since sitting down – clearly registered that we’d been in the car for quite a while (so we should be well on our way to Grandma’s), did a double-take, and stage whispered, “Why are we going home??”

Family bonding is the best.