One week ago, we’d just attended the mandatory lifeboat information session and were watching Mickey and crew shimmy across the deck stage as we were about to depart Port Canaveral for the Bahamas.

Right now, we’ve just come from visiting Jambi at the vet (she’s in heat, and is required to be boarded so she doesn’t get knocked up; CCI frowns on that), it’s 16 degrees out, and we’re about to have sloppy joes for dinner.

Am I asking for sympathy? Oh, hell no. FIRST WORLD PROBLEMS, people.

Okay, so they’re not even problems. And saying that I miss being on vacation makes me sound like a special kind of asshole.

But I do. I miss being on vacation. (Special, that’s me.)
I miss the entire trip, which was just… absolute magic. (And, no, not just because that was the name of the ship.) For the first time in maybe ever, every single minute of our vacation was just as we’d hoped it would be. It took us away from the cold and the snow and the exhausting grind of daily life and into something otherworldly, where only joy and simple happiness existed.

Nick’s travel schedule can take its toll on everyone, but one of the bonuses is that he racks up crazy amounts of hotel points. To make the trip more affordable, we’d chosen to use some points to stay at a hotel in Orlando that was near both Downtown Disney and Universal. The hotel itself was great, with several fun pools and condo-style units that you could buy into as part of a timeshare (not for us, but thanks) that featured kitchenettes and washer/dryers that Ella found endlessly fascinating. “We could do our laundry if we wanted. We can even wash dishes. This is the best hotel room EVER.” (Which is really something, considering the palatial estate she and Nick stayed in last month…)

But even greater than the building was the sense of relaxation we all experienced the moment we got off the plane. Okay, that and the weather. We rolled down our windows just because we could (and, would you look at that, the windows didn’t freeze open!) and continually marveled at how fantastically warm we all were. 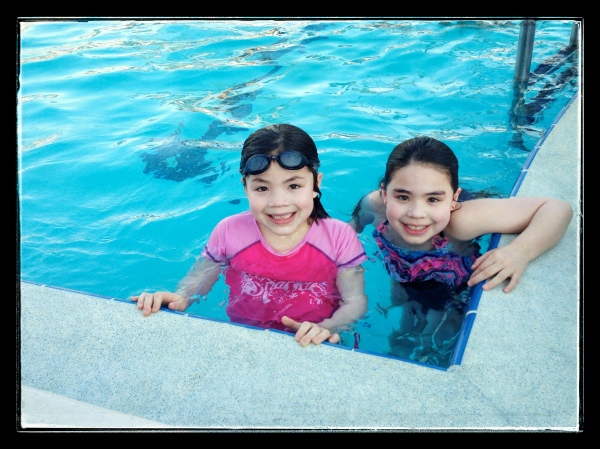 Although we had reservations for dinner the following night, we’d decided to wing it that first night – assuming that, with the ridiculous plethora of restaurants at our fingertips, we would have no trouble finding a place to eat. And, in fact, that might have been true had I not blithely looked at the map on my cell phone and told Nick to take a left, thus bringing us to the front gate of SeaWorld at 6 p.m.

Y’all, Shamu himself couldn’t have found a table.

After passing a Red Lobster and several sushi joints (I wish I were kidding), we began to get hungry enough to consider consuming the seats of the rental car, and drove blindly into the only not-completely-packed strip mall we could find, swearing that we’d eat at the very first place that presented itself to us. Which was… Hooters.

And also some Margarita-ville-esque restaurant across the lot, where we managed to score ourselves a table before the onslaught of SeaWorld refugees arrived a few minutes later. The next morning (after drying our bathing suits in the dryer right in our hotel room, holla!), we were up bright and early to make it to Universal for the opening of The Wizarding World of Harry Potter. 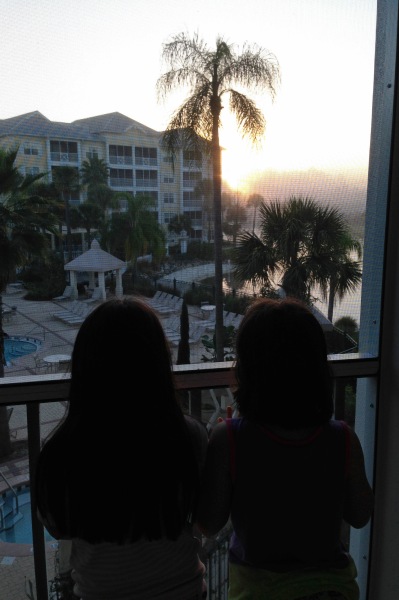 The girls marveling at the (warm!) sunrise outside our balcony.

We’ve been fortunate enough to visit Orlando several times in the past few years, and each time we have ardently avoided Harry and the gang. In part this was because we’re so devoted to All Things Disney, we didn’t want to take time away from The Happiest Place on Earth – but it was also because we didn’t want to take the girls there before we thought they could really appreciate it. I mean, it’s an amusement park devoted to magical things, so we knew they’d enjoy it, but until they were really familiar with Harry and his world, we didn’t think they’d truly get the park.

Since Ella bleeds Gryffindor crimson, we knew that the time was right for her to visit. Having not yet read the books, Annie is unfamiliar with all things Harry – but given that we wanted to arrive a day ahead of our cruise’s departure anyway (to ensure we didn’t miss getting onboard, not that that ever happens *cough*), we thought we’d give it a go, anyway. And so this trip was for them – to show them Harry’s world, brought to life. To share in their enjoyment of the park. To witness their jaw-dropping amazement. I mean, yeah, I knew it would be cool, but I really felt that this was about the girls.

Until we walked through the gates of Hogsmeade and I began to cry. 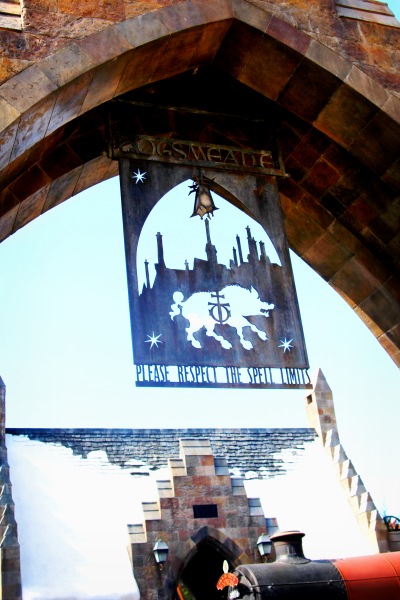 It was… incredible. Perfect. Just as I’d imagined it would be. You guys, we were STANDING IN THE MIDDLE OF HOGSMEADE. Muggles. IN HOGSMEADE!

And it only got better. We went inside Hogwarts – HOGWARTS!! – and flew around and watched a Quidditch match. 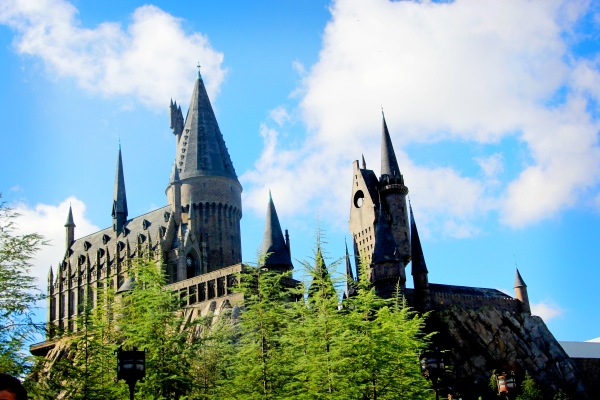 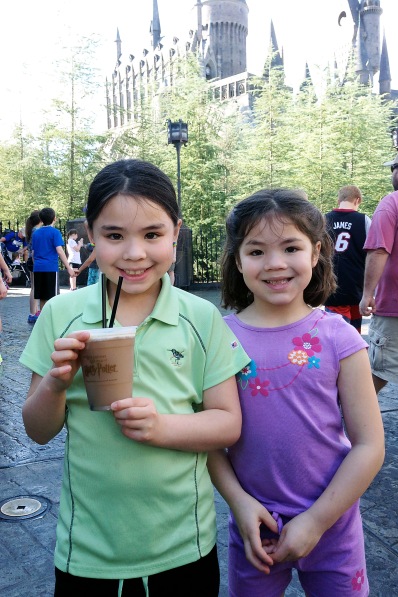 A wee bit sweet for Nick’s and my liking, the Ella and Annie drank that shit up.

We saw Buckbeak and rode a silly roller coaster, followed by the best roller coaster I’ve ever been on in my life (except Nick and I had to ride it one at a time because the girls are not tall enough yet and it took me, like, two hours to be able to walk a straight line again after I got off). We browsed shops – quills! Potions! Exploding snaps! Cauldrons! Chocolate frogs!  – and gaped at the absolutely exquisite detail that was put into every aspect of the park. 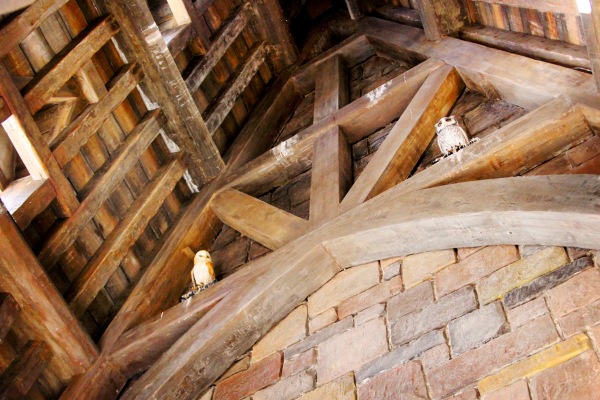 There’s even bird poop in the owlery!

I think all of us could have spent the afternoon browsing the shops and pretending we had British accents, but by eleven o’clock the park was so crowded it was hard to move, and instead of feeling nostalgic and awe-struck, we became angry and who’s-touching-me?, so we decided to get some lunch and head back to the hotel for the afternoon.

Whenever we go to the Disney parks, we (very purposely) follow a fairly tight schedule. I wouldn’t have it any other way, but to be able to just relax and go with the flow was novel and pretty freakin’ fantastic. The girls spent hours in the pool while Nick – to his surprise and delight – discovered that the poolside bar was showing the Women’s USA/Canada gold medal game. 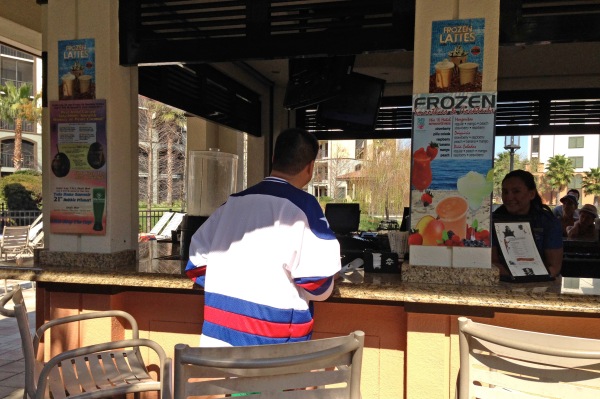 Yes, of course he brought his jersey along. Duh. 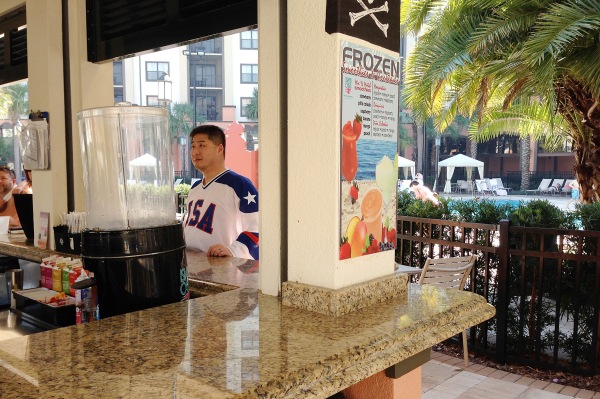 And yes, the final score was a major bummer (if you were rooting for the USA), but it was still pretty righteous to watch the game while the girls frolicked about in the pool and I drank a mai tai.

Our last hurrah before heading to Port Canaveral in the morning was a session for each of the girls at the Bibbidi Bobbidi Boutique in Downtown Disney. I’d wondered if Ella was a bit too old for such girly frivolity… But I shouldn’t have worried. 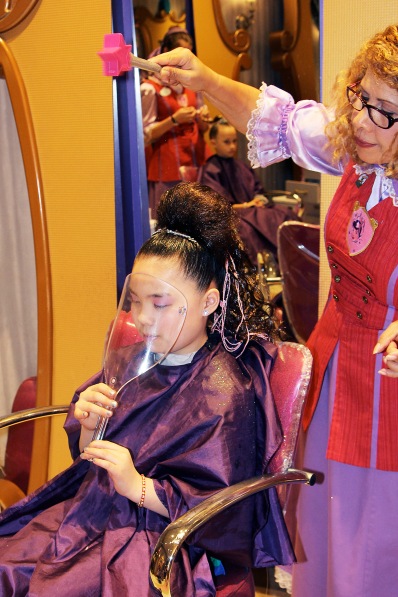 She was so pleased with herself, I was willing to ignore the use of my arch nemesis, superfine glitter. 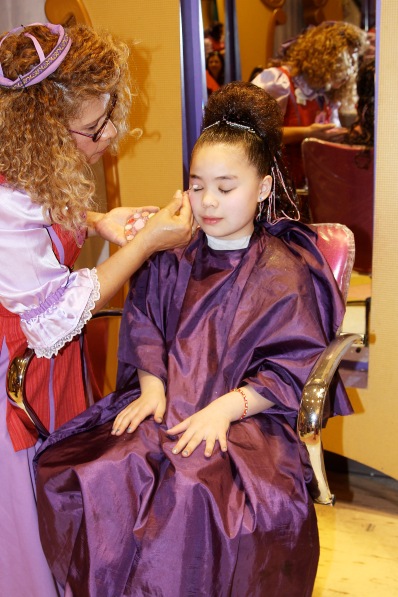 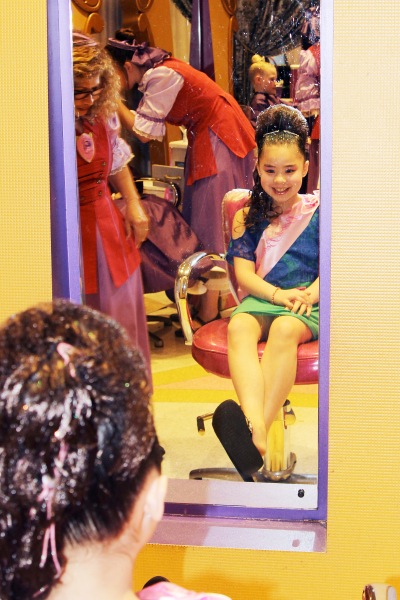 So her hair is a little bit 80s diva meets Belle meets beauty pageant star meets trailer park. ‘What? I am happy for you, sweetie. Of course I love it! Why wouldn’t I love it?” 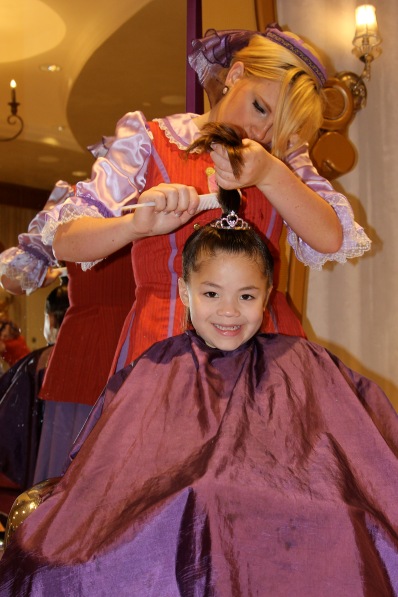 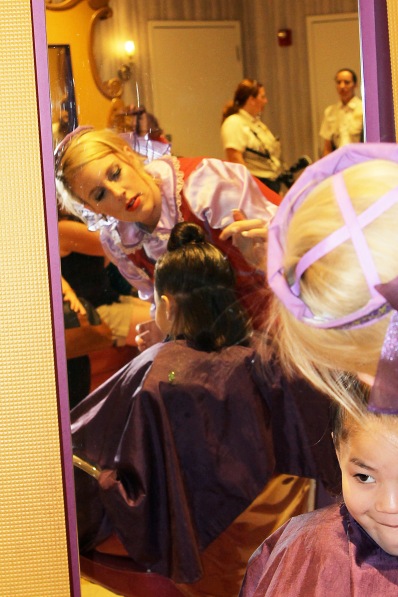 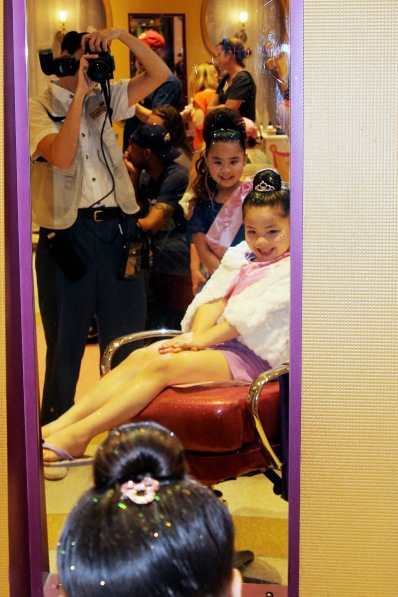 Put ’em together, and what have you got? 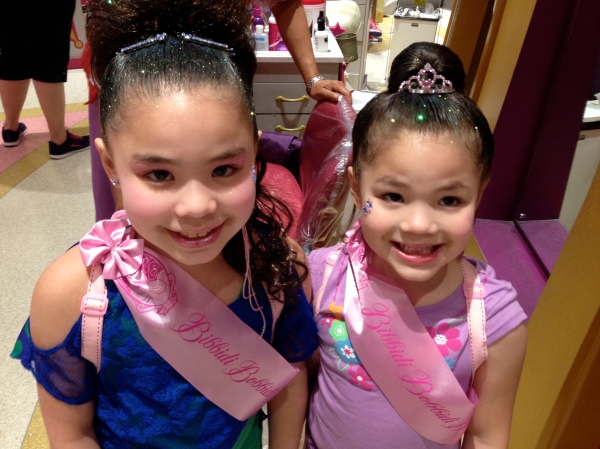 They wore their ‘dos onto the cruise the next day, which meant that our official family photo was taken with them looking like this, which subsequently meant that every time we picked the girls up from the kids’ club, their pageant-greatness was flashed on the screen for all to see. Awesome.

For dinner, we ate at a Downtown Disney spot (sorry, Hooters) that had paper tablecloths, and Annie promptly took to filling up her entire space. She drew coasters for her glasses, napkins for her silverware, and a little bit of everything in between. 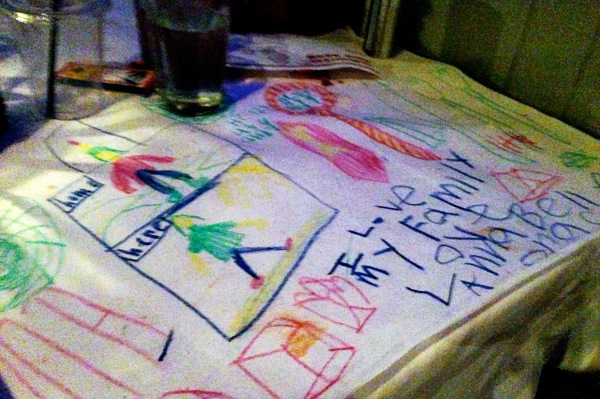 I like all of the crazy things she drew, but my favorite part is the “I love my family” that she added, not because she was coerced or writing an assignment for school or asking for a pony, but because we were all having such a genuinely rockin’, kickass, wonderful time, she kinda couldn’t keep it to herself anymore.

Re-entry has been hard (see: it’s cold here), but just looking back on these pictures makes me smile. Do I realize how damn lucky we were to have gone, period, much less to have had such a magnificent trip? You bet I do, and I am ridiculously grateful that we could make it happen.

And to think… I haven’t even gotten to the cruise yet.
But that’s another story.

3 thoughts on “It’ll do magic, believe it or not”