I love winter. There is no sarcasm involved in that statement – I truly love it. I love the white blanket that the snow drapes over every tree branch and vista, filling our world with crystalline glitter. I love the excuse to drink hot chocolate any time you feel like it, and the chance to cozy up on the couch in one of our absurdly thick, warm blankets. I love fires in the fireplace just because, I love the way fresh snow squeaks under your boots, I love velvety red scarves tucked into jackets. I love the way fresh snow smells, the crispness of your breath on a cold morning, and finding new, hot Starbucks drinks to add to my menu. I love not having to shave, not having to worry about your hair because it’s going to be smooshed under a hat anyway, not picking up dog poop for weeks at a time because it’s hidden under the snow and I can’t find it (which means no one can see it so it’s not really there, la la laaaaa), and not washing the kitchen floor, like, ever* because it’s just going to get mucked up again in three minutes.
*exaggeration. Slightly.

This Rochester winter is on-track snow-wise (nearly 80″ so far, on our way to our typical 100″), but in terms of temperatures, it has been SO DAMN COLD this winter. Yeah, we get snow, and I’m used to that (hell, I’m one of the weird ones who even enjoys that), but this winter’s bitter, biting cold — the cold the keeps the kids from playing outside, the cold the unexpectedly closes schools, the cold that leaves you chilled to the bone nearly all day long — has really been a challenge.

In case you’ve been wondering just how cold it is (and, oh, I know you were), Canandaigua – the lake on which my family has a house – has actually frozen over this year. Big deal, you think (sarcastically, I might add). But it is a big deal. When my grandmother, who grew up in Rochester (and who, you may recall, is nearly ninety-four) says she cannot remember a time when the lake has frozen completely over, you know that it’s a pretty crazy thing. Even without my grandma’s extensive knowledge, you’d know it’s a big deal because Canandaigua is not only long (15.5 miles) but deep — 276 feet at its deepest spot, to be exact. For that much water to freeze over, it’s got to be effin’ COLD, y’all!

Tuesday was a bit nutty at our house; Nick was finishing up a whole slew of things at work (having not been at work on Monday due to our country’s festive celebration of our Presidents’ many achievements) and the girls and I were in a manic packing frenzy to get ready to go out of town on Wednesday. (More on that later…) Still, we made a point to find time in the afternoon to pick up Phoofsy and bring her down to the lake with us so we could see this tundra-like spectacle for our selves.

To say it was otherworldly is a ridiculous understatement.

Taken at the north end of the lake, looking out over the vast expanse of white…

The wind was absolutely wild.

*if you have no idea what’s going on here, you need to see Frozen. Or at least google “Let it Go”. Fo’ real.

We then decided to attempt to venture to our house, because passing up the chance to see our own beach redone in Elsa’s magic was just not happening. I say “attempt” because our house sits at the end of a long private road, half of which is unplowed, and the last part of which is uphill. We knew it would be an adventure, but hey, if you can’t add a little adventure into your February break, what good are you?

When we got there, we discovered that there was still a good foot of packed-down snow on the road, but forged ahead anyway… until the car got stuck. We managed to back up and re-drive and inch our way forward, with Phoofsy, as usual, being an extremely good sport about our “exploring.” When we were still two houses away, it became clear that we could go no farther – but there was no way that we were going to come this close and not go down and check things out. And so, despite the snow being up to the girls’ mid-thighs at some points, we hiked the remaining distance to the house (this time, Phoofsy wisely chose to take the pass, and remained in the car).

After arriving and checking things out, the girls soon announced that they were getting awfully cold, and their cheeks were becoming really itchy – as their stellar mom, I’d forgotten to give them their antihistamines that day. Whoops. If you’re allergic to the cold, falling through the ice is probably a pretty quick way to go into anaphylaxis. So, we didn’t stay all that long… But, hot damn, am I glad we made it.

And here… is Tuesday. 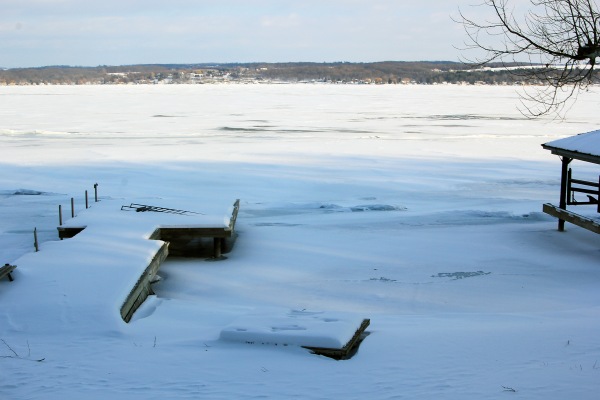 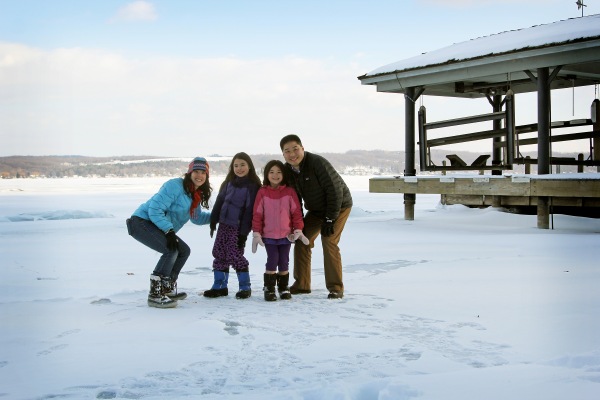 Here we stand, in the light of daaaaaay!

In the end, the cold did bother us anyway, so we hightailed it out of there and back up to the warm car where Phoofsy was waiting. I later learned that this was the first time in her life that she’d had the opportunity to see the lake like this, so to say that I’m glad we took her… doesn’t quite cover it.

This brutal winter’s cold may not have been good for much, but it did bring us this potentially once-in-a-lifetime opportunity. And that is pretty freakin’ cool. Literally.

3 thoughts on “A kingdom of isolation”