Every year, I ask for the same thing for Mother’s Day: some time to myself, some time with Ella and Annie, and a card or picture “saying something nice.” Everything beyond that is all gravy.

This year, my Mother’s Day was full of gravy – seeing my mom and my aunt and my grandma, oodles of time alone, lovely and beautiful gifts (I did get that GoPro I’d been coveting – lucky girl!) – but, due to some unusual circumstances, I wasn’t able to spend time with the girls.

And, apparently, making Mother’s Day cards didn’t fit into the curriculum, because neither Annie nor Ella brought anything home from school – and then the little stinkers forgot to make me something on their own! I’d love to say that I took it graciously, but I totally did not. I pulled out the Mom Guilt and requested* a card or a note by, oh, this past weekend (a week after Mother’s Day).

* by “requested” I mean “told them that if I didn’t get one, I’d be heartbroken forever.” I usually avoid Mom Guilt at all costs, but when I lay it on, it’s thick.

Fortuitously for us, Nick was going out of town this weekend (unusual, as he is usually away during the week), which meant that it was going to be just Annie, Ella, and me for forty-eight solid hours — more than enough time to make up for not really hanging out together on Mother’s Day. Seeing as how we had only a few obligations and responsibilities, I decided to make it a full-on Girls’ Weekend.

Y’all, it was one for the books.
Or the blog, in this case.

For the past five-ish years, we’ve planted a vegetable and herb garden. The cold weather had caused us to fall behind, but this weekend offered the perfect opportunity to get started – and so, after school on Friday, we headed to our local nursery to pick up the seeds and baby plants we needed to begin our garden.

She was a wee bit excited to take home our plants…

They each got to choose their own veggies… and did sherpa duty, too. Score!

Fifteen vegetables and six herbs (plus strawberries), ready for planting.

Once the car was packed up and smelled like fresh basil (omg delicious), we beelined for the girls’ most favorite store in the entire world: The Dollar Tree. I might have been nominated for Mother of the Year for this decision. By now, I’ve wizened up, so they each had a fifteen minute time limit during which they could spend their allowance to their hearts’ content. 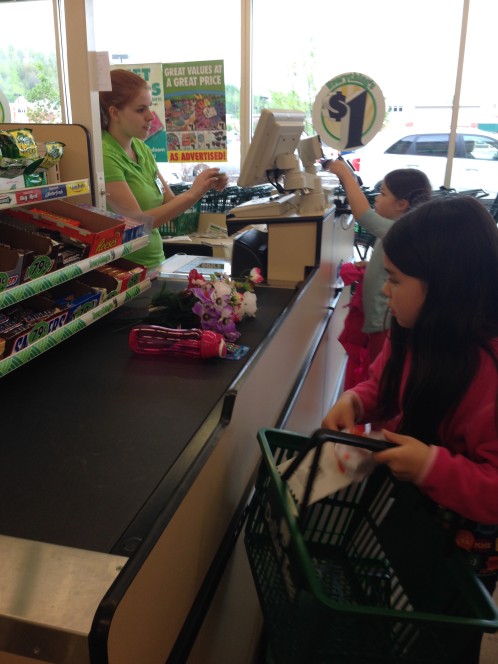 ALL THIS AMAZING STUFF FOR ONLY A DOLLAR APIECE!

Following The Greatest Store of All Time, Ella needed to go to swim practice – which, while not quite Girls’ Weekend fun, did provide Annie with the opportunity to draw a picture for her class’s Teacher Appreciation gift, so that was kind of perfect. (Was she off drawing my picture? No. But I chose to ignore that in a mature fashion.)

They’d opted for pizza for dinner, which was eaten on the couch while we watched videos on YouTube before crashing into my bed for the night. I’d envisioned a relatively leisurely sleep-in — recent heavy rains had cancelled Annie’s soccer game on Saturday morning, so we didn’t have anywhere we needed to be right away — but we were all wide awake at 5 a.m. when the birds outside my window decided to scream at us that it was MORNING! IT’S MORNING! ARE YOU UP? MORNING!!

I realize that many people enjoy waking up to the dulcet chirps of these winged creatures, but I do not, because they never fail to awaken me at an ungodly hour and then I can’t return to sleep while they continue to shriek their greetings at one another. HAVE YOU EATEN BREAKFAST YET? LOOK, IT’S GETTING LIGHTER! HAVE YOU NOTICED? IT’S MORNING!! As a result, our windows are always shut tight when I crawl into bed each night – but, turns out, in the tangle of arms and legs and misplaced bedding, I’d forgotten. And so I shimmied out of bed (the girls prefer that I sleep between them, which is super comfortable) and closed the window, crossing my fingers that we’d all be able to go back to sleep. YES, I CAN SEE THAT IT’S MORNING. YOU WANNA KNOW WHAT I’M HAVING FOR BREAKFAST? EGGS.

Miraculously, we did manage to snooze again… but, at 6:30 a.m., were greeted by my second-favorite wake-up sound: the lurching voopahs of a dog about to vomit. As I’d predicted the night before (when I caught him mid-yard with a long tail hanging from his mouth, omg omg omg), Langston’s stomach could not handle the… rat? vole? mouse?… that he’d ingested (WHY DOES HE KEEP DOING THIS??), and so up it came. At least he was considerate enough to expel the creature’s remains on the hardwood rather than the carpet.

Dogs are so much fun!
And also? Sleeping was pretty much over.

Lack of sleep aside, the morning was beautiful – in the 60s, mostly sunny – and after I got the garden ready for planting, the girls jumped at the chance to get their seedlings and seeds into the ground.

Ella was quite giddy about her cherry tomato plant.

Please ignore my hand in the photo; I’m still figuring out how exactly the GoPro works…

Our “big deal” fun for the weekend was seeing the touring production of Beauty and The Beast, which we ventured to after enjoying a yummy lunch at a tiny restaurant in our little town. Even though Annie declared that she wouldn’t marry the Beast because he was too ugly (um… but… the whole moral of this story is… never mind…), we all thought the show was pretty darn good.

I gave them the option of Saturday dinner at home, dinner ordered in, or dinner out — and they chose to dine at one of my most favorite places in the entire world: Wegmans. Which meant we all got exactly what we wanted from the prepared food bar and I could eat Indian food without Nick complaining that he can’t stand Indian cuisine. Bonus!

It was obvious that the day had been just about as deliciously full as either girl could have hoped… so I decided to really gild the lily and take them out for ice cream. Hey, on a Girls’ Weekend, calories don’t count. (At least, that’s what I told myself when I asked for extra hot fudge.)

Why, yes, they are wearing different outfits than in the previous (two) photographs. Three daily clothing changes is the accepted bare minimum ’round these parts.

After our restless Friday night, I gave Annie and Ella the opportunity to sleep in their own beds on Saturday… HAHAHA. That was a good one, Mommy! Thankfully, our second night together was more peaceful than the first (no open windows or puking pups), and our Sunday morning was every bit as slow and easy as I’d hoped Saturday would be. We snuck out of church early (surely God understands) to head to our final official Girls’ Weekend destination: The Lilac Festival.

See, Rochester is kind of known for its myriad summer festivals, but Nick doesn’t really enjoy festivals all that much (too many people and heat and crowds and have I mentioned people?) and I’d been reluctant to brave them solo with the girls. But Ella and Annie seemed more than old enough to be successful festival-goers, so off we went.

The walk into the park was not exactly short, but the girls entertained themselves by running amongst the lilacs and climbing on this absolutely enormous, full-branched tree.

We ogled the food trucks, raced one another on an inflatable obstacle course (well, the girls did; I cheered them on), and stopped at every single kiosk and vendor’s display in the arts and crafts area. Although they’d shown excitement for the doll clothes that we’d found (“They’ll fit my American Girl, Mommy!”) and the trinkets that they insisted they purchase with their allowance money, their biggest grins were saved for the gentleman selling bow ties. Nick wears bow ties almost exclusively these days (largely in honor of his dad; Bill was an avid bow tie wearer) and the girls were ecstatic to find an entire booth of just bow ties – CAN YOU BELIEVE IT?? After purchasing the tie selected by the helpful and informative seller, Annie skipped away declaring, “The Lilac Festival is the best EVER!” So that was kind of awesome. 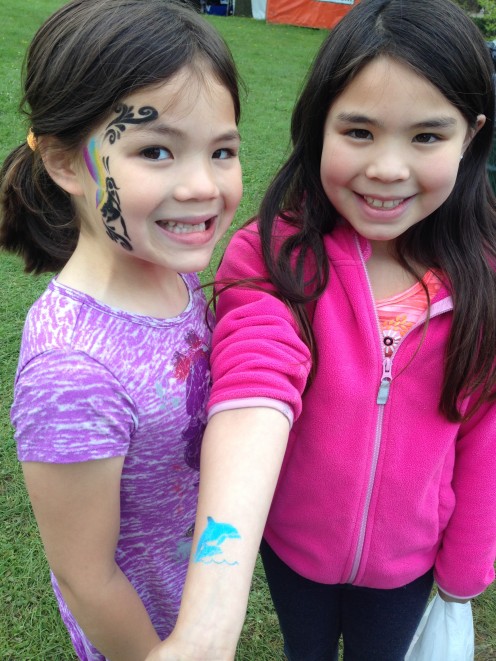 They also got airbrush tattoos. Annie’s was slightly more visible than Ella’s.

On our way out, the girls made me promise that we’d come back to the festival again next year, something that I was more than happy to agree to. We laughed and sang for the duration of the car ride home – and then, shortly after our arrival, Nick returned from his trip and our Girls’ Weekend was technically over.

I used to bemoan his being out of town, especially on a rare weekend, because it was just so difficult – parenting alone, bedtimes, mealtimes, nap times… basically all of the times. But now, it’s so different. Ella and Annie are just plain fabulous human beings – fun and funny and entertaining and great listeners and game to try just about anything – and spending the weekend with them isn’t difficult anymore. It’s fantastic. (That they can wipe themselves and no longer require their food be cut into bite-sized portions is also a huge plus.)

More weekends could be like this one, I suppose – relaxed, full of adventures, devoted to having a blast. But, then again, maybe not. There’s always something that needs to get done, a project that needs tending, rooms that need cleaning, and spending the entire weekend devoted to just hanging out with my children is simply not possible most of the time.

Maybe that’s why this weekend was all the more sweet: because it’s a true rarity. The housecleaning and chore-doing went to crap (although I did manage to mow the lawn and do the dishes) and, instead, every moment was spent enjoying Annie and Ella – enjoying them, enjoying their company, enjoying being their mom.

I know that this weekend was its own special kind of bubble. (Indeed, by this morning, Ella had stomped off to school after being so rude about her breakfast, I’d saved it to give her again at dinner (true story) and Annie forgot her school shoes at home. REALITY CHECK, stat.) But I’ll take it.

It was the best Mother’s Day gift I could have received… and I even got some cards by the end of Sunday, too. (Mom Guilt, FTW!)