As a grammar stickler, I often find myself holding my tongue. It used to be that I’d correct people when they misspoke… but, turns out most people don’t appreciate being confronted with their grammatical mistakes. Especially not in public.

And, although I practically have to tie my hands down, I do not correct mistakes in communications that come from my workplace or my daughters’ school and then return them to the sender. I do have scruples.

(I also do know that you’re not supposed to begin a sentence with “and” or “but.” Nor are you supposed to use sentence fragments. But I tell myself that it’s okay because I’m using it as a brilliant – if ironic – stylistic tactic.

Having bitten my tongue to the point of nearly drawing blood for all these many years, however, I can no longer stay silent on a point that has been irking me more and more with each passing week: the extreme overuse – and misuse – of the word literally. 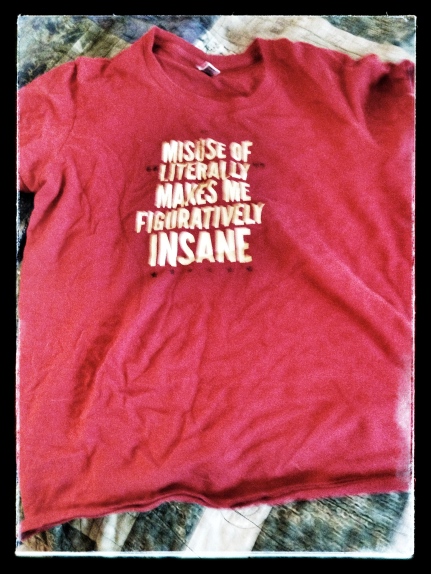 Nick got me this t-shirt for my birthday last year.
The man knows me well.

For several years now, literally has slowly been sneaking into our daily lexicon (at least here in ‘Merica), popping up in sentence after sentence – where you would never have found it before – and even being used by super-intelligent, well-spoken individuals who, one might think, would avoid it.

I know you know what I’m talking about.

“We were literally about to get in the car when the crow attacked the groundhog.”

“So, I’m on the phone with him when he literally tells me that I look like Cher.”

“She can’t come to the funeral because she literally just found out that her uncle is moving to Guatemala.”

“I’m so angry, my head will literally explode.”

That last example is the most galling because, of course, literally means… well, what it says: it’s literal. True to fact. Not exaggerated or metaphorical in any way. If a person’s head is literally going to explode, you’d think they’d be in agonizing pain. Heck, you’d better haul their ass off to the ER immediately because otherwise you’re going to have a nauseous* mess on your hands. (*See what I did there.)

So, no. It’s highly unlikely that something literally scared you to death… because you’d be, um, dead. Gas did not literally cost you an arm and leg unless the pump was stationed over a land mine. If you literally cannot wait to use the bathroom, you’d better invest in some Depends.

Or perhaps you could just substitute the word figuratively for literally and call it a day.

Misuse of literally aside, I find it so odd that this particular word has wormed its way into our conversations – especially because, the vast majority of the time, it’s completely not needed. You were literally going to the store when “Danger Zone” played on your Pandora station? NO WAY! She is literally going to eat her lunch in five minutes so she can meet us at the rodeo? How… precise?

Literally seems to have replaced really or honestly in our lexicon, but it doesn’t quite mean the same thing. It’s become an unnecessary intensifier, a throw-away word to express a strong emotion. Saying that you were literally standing next to the rabid beaver may be correct (if, in fact, you were standing right beside a rabid beaver), but it’s sort of a weird qualifier to add. If, upon meeting Chuck Norris, your buddy was literally so excited… um, okay, I guess.. but why bother using that word? There’s a whole English language out there at your fingertips (figuratively, duh).

There are times, of course, when literally is not only appropriate but helpful. When you sneak up on someone and get hit by the rock they’ve accidentally chucked in your direction, you could laugh and say that you were literally only a stone’s throw away. If your daughter is holding a flaming marshmallow atop a s’more and waving it around the yard, she might literally light up your world. In these times, go ahead. Use that word. You rock with your bad self.

But, the rest of the time, can we please give literally a rest? There are so many other worthy words out there, just longing to be attached to something important. Simply. Frankly. Truly. Actually. Absolutely. Definitely. Positively. Indubitably. They’re good, strong, deserving words. All we need to do is give them a chance.

The fate of the English language is in our hands.
Or, at least, our mouths.
Literally.

This collage is apropos of absolutely nothing except I wanted to include something cute in this post and the pups are literally dog tired. HOLLA!

* For the record, I have not literally been holding my tongue when I see grammatical errors. That would really be incredible, wouldn’t it? And quite disgusting. Nauseous, really.

** Fingers crossed for no grammatical errors in this post. OH THE IRONY.