A couple of days ago, one of the girls had a friend over. (I won’t name names so as to offer said daughter some kind of anonymity, but there are only so many guesses to be had here, people.) They played in the playroom for quite a while, with what I wasn’t sure – Barbies? Dress up? Legos? – making very little noise or fuss, perfectly content. I didn’t even stop to check on them because they seemed to be having such a good, quiet time… Why mess with a good thing?

That evening, I had a load of laundry to do – which takes me right through the downstairs and into the basement – and, as I navigated the toy explosion/obstacle course that is our playroom, I glanced briefly over to notice that there were a bunch of dolls set up in some kind of purposeful formation. It dawned on me that this was what our daughter and our neighbor must have been doing while they played, but I didn’t really think anything of it. 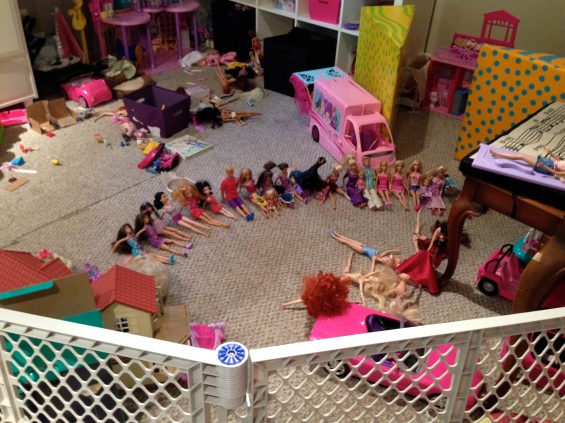 A little while later, Nick, too, ventured down into the basement (we do laundry separately here; I highly recommend it) and asked me if I’d gotten a look at the “set-up” in the playroom.

Oh, yeah. You mean they’ve been doing the Jonestown thing again?
(It is not at all uncommon for the girls to set up dolls in freakish-looking ritualistic poses all in a row on the floor.)

“No. It’s more like a peep show Cirque du Soleil.”

What are you talking about? They’re just dolls in formation on the floor!

“Uh, I think you need to take a much closer look.”

And so I did, fully expecting to see that Nick had over-exaggerated… and discovered that what I’d thought was a cutesy – if bizarre – doll collection was actually…

You’ll definitely want to click on this to make it larger.
That is, if your filter at work will allow you to do so.

WHAT ON EARTH IS GOING ON HERE???

As I wrote on Facebook:
(parenthetical observations were added by me after the fact)

I don’t even know where to start with this…
The semicircle of onlookers…?
(Because, seriously, why is everyone watching?)
Bringing the children…??
(This event is family-friendly?)
Only two males in attendance…?
(Not that there’s anything wrong with that…)
Downward facing dog (doll?) OVER the other doll’s face…?
(There are names for these kind of moves; or, um, so I’ve heard…)
The starfish Aurora in the middle…?
(Sleeping Beauty is FLEXIBLE, y’all.)
The doll on the purple door on the piano bench…?
(Some kind of pre-show seance?)
I just… Um… I didn’t realize that’s how it was in our family.
.

Since the girls were already in bed, it didn’t make sense to awaken them to find out what the hell was actually going on in the playroom, but I made a mental note to ask them about it later. Mental notes are the reason I have a to-do book, however, so naturally, I forgot all about it.
.
Last night, Nick and I split up reading with the girls before bed. As he headed upstairs to change out of his work clothes, he called over his shoulder (to our offspring, not me), “Come on into the bedroom! You can read to me while I take off my clothes!”
.
I chuckled at his choice of words and called back, “So that IS how it is in our family!”
Which prompted me to remember the burlesque show in the playroom. I immediately began my interrogation.
.
Sweetie, you know those dolls in the playroom?
.
“Yes, Mommy. I’ll clean them up tomorrow!”
.
No, it’s not that. It’s just… What’s up with the set-up?
.
“Oh, THAT.”
.
Yes. THAT.
.
“Well, the lady was becoming president. Or maybe the principal. It was a big party.”
(OMG, presidential inaugurations make so much more sense now)
(Also: DOLL BURLESQUE MYSTERY SOLVED)
.
Which lady?
.
“The one in the black and red fancy dress.” 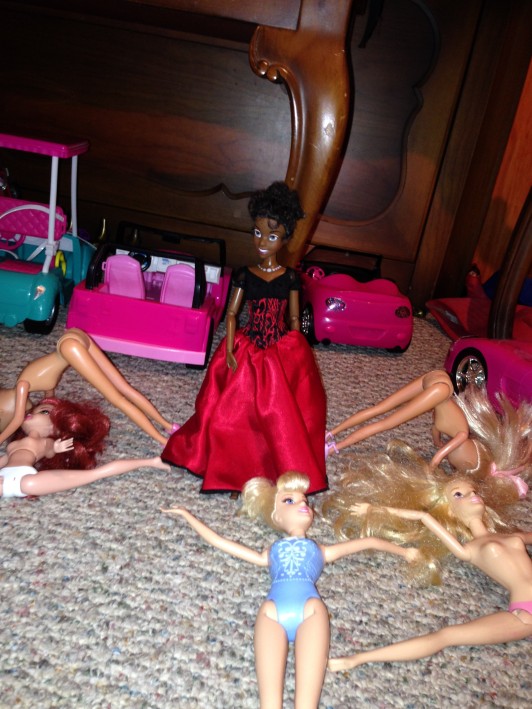 Resembling a scene from Disney’s “The Princess and the Strip Club”, a movie which – apparently – was scrapped before it hit the theaters. Which is a shame, because New Orleans definitely has a brothel-y side.
From this angle, the “performers” are so… symmetrical…
.
That’s Tiana, but it’s not her dress.
.
Um, okay, sharing is good. But what were… the rest of the people… doing around her?
.
“That was a dance. It was part of the party.”
.
Fair enough. But how come they weren’t really clothed?
.
“Well, they had their underwear on.”
.
Semantics, but that still doesn’t really explain why they weren’t dressed.
.
“They’re going to be wearing clothes later. Really fancy ones. Like, all matching and stuff. Skirts and things.”
.
Just skirts?
.
“We’ll see what’s available. This was just the dress rehearsal.”
.
That’s a misleading choice of words.
.
“They were practicing. They’ll get dressed up later.”
.
Why was everyone watching?
.
“Because it was a show!”
.
Of course. They were watching the mostly naked performers doing their dress rehearsal for the president-principal lady?
.
“YES, Mom.”
(duh)
.
And they even brought their kids?
.
“Yes. It was a show for families.”
.
Maybe in Vegas.
.
“What?”
.
That Aurora sure is… flexible. She was like a starfish.
.
“I know! She’s the fanciest performer!”
.
That’s one way to put it.
.
“Don’t worry. I’ve got it all planned out. Their final performance is going to be great.”
.
Does this little number have a name?
.
“Yes. It’s called the Naked Ballet.”
(pronounced it like ballette, rhyming with palate, not ball-ay, rhyming with… ballet)
.
Ballette?
.
“Yes. That’s the French word for ballet.”
.
Tres nice.

.
Naked Ballette.
.
I heard you the first time. But thank you for sharing.
—————-
So. To sum up, our child – and a friend – created pretty much exactly what Nick had described: a peep show Cirque du Soleil. In our playroom. With Barbies.
.
Awesome.
.
Our girls love playdates! Do be sure to send your daughter over any time.
.
On the bright side: their president/principal was a black female. We may be raising risqué nudists, but at least they preach equality. Holla!