I’ve visited the lake (Canandaigua, one of the Finger Lakes in western New York) every summer since I was seven months old. It’s magnificent; the clear, sparkling water; the bonfires on the beach; the rising green hills; ice cream trips made by boat; the flat shale beaches that make for perfect skipping stones; the lack of weedy shoreline that so many other lakes possess; the piercing brightness of the stars at night, with the Milky Way streaking right over the dock. The moment I’m near that water, I’m home.

For as long as I’ve been alive, family has been fortunate enough to own a boat, and so I have more memories than I can count of skimming across the water onboard our Boston Whaler… or… whatever kind of boat we have now. I’ve tubed until my arms are ready to fall off (likely thanks to the cackling drivers – and egging-on passengers – who decide, without fail, that it will be a hilarious game to make the trip as wild as possible in an attempt to send the tube-riders flying off of said tube), water-skied until I got blisters on my palms (or until I took such a big fall trying to go over the wake, I lost not only lost the skis but got smacked in the nose by one, too), wake boarded (once… although I did – completely accidentally – manage to do a trick and turn the board 180 degrees because the “wrong” foot was facing forward, to raucous shouts from the passengers and bewildered confusion from me), and jumped off every part of the boat into the open water to go for a dip. I have no idea when I officially learned to drive the boat – come to think of it, it was really more a process of osmosis, with me gradually just taking over (something that would be, um, frowned upon today with, like, rules and regulations and needing a license and all that), and I still have to say a prayer and close my eyes when I finally dock it (opening my eyes might help with the whole not-running-into-the-dock thing, but hey, why mess with tradition) – but I love, love going for a boat ride.

In many ways, I’m more at ease on a boat than I am on land. Although I’m known to grow both carsick and airsick, the rolling motion of the waves is actually calming to me. I can trip over the pattern in the rug (and did, once, when I was in high school; apparently, I slammed my head into a water fountain and knocked myself cold, resulting in a concussion. I am not making this up) but I’m surprisingly sure-footed when out in the middle of the lake. It’s not uncommon for me to lose my balance while just walking in my kitchen, but I can prowl around the thin walls of the boat like a freakin’ maritime mountain goat, never yet falling into the water below no matter how precarious my climbing (not that I’ll ever admit this to my girls, of course; safety first and whatnot).

Our crazy winter left the lake completely iced over for the first time in forever (do you see what I did there, Frozen devotees?), which, in turn, left the water level higher (and far colder) than normal from both the ice melt and the snow run-off. Then, a couple of weeks ago, we were hit with a decent rainstorm that walloped Rochester and Canandaigua, sending virtual torrents of water down the steep hillsides surrounding the lake and into the basin below. Within two days, the water had risen a good two feet above normal, swamping docks and swallowing up beaches.

My aunt, who was staying at the lake house with my grandmother during and after the storm, sent us these photos of our (now much smaller) beach.

The shoreline running between us and the house to the left is usually a good six feet wide… Not so here… Plus, you know, the portions of the dock and the beach that are obviously underwater…

That yellow swing is normally at least five feet from the water’s edge. It’d be hard to plop a baby in there now… 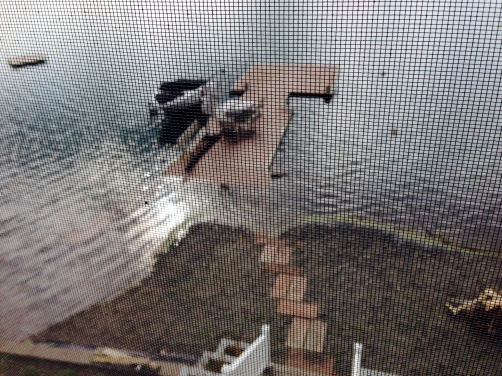 The following morning, the water levels had risen still higher, covering a large portion of the dock and filling up the beach.
It’s kind of like having one of those cool infinity pools… except, um, not.

As a result of the flooding, all motorized boating was prohibited on the lake for over a week – in part because the wakes from the boats would swamp already waterlogged docks and beaches and also because there was so much debris floating around, traveling through it would be like trying to reenact the Titanic’s voyage. And we all know how that ended.

Even through Memorial Day weekend, traditionally the first “big” weekend of the year, there were no boats allowed on the lake. I was bummed not to be back on the water, but quickly grew acclimated to the very unusual… silence… that filled the air. In all these years, the ever-present sound of the motors had – apparently – become its own kind of white noise, humming in the background constantly. Without the revving and whizzing by of various watercraft, the lake took on an entirely new, and unexpectedly relaxing, feel. I would never have told you that not having boats on the water would be a good thing… but it was. It was peaceful and slow and old-fashioned and very, very good.

Annie poking a stick at our Memorial Day weekend bonfire. By now, the water had receded significantly, but it was still nowhere close to normal.

Last weekend, a good two weeks after the lake rose to its precariously high levels, the water had finally drained back to  almost normal, and the boating ban was lifted. As if to make up for lost time, vessels of all shapes and sizes began darting past our dock, the whirring of their motors creating the soundtrack for our sunbathing and shale-skipping (although Langston launched himself off the dock with aplomb, the water was still far too frigid for our cold-allergic kiddos, and so no swimming was to be had this time). Although I had never given it any thought before, I was now hyper-aware of each boat that passed by the house, feeling both comforted and annoyed by their sound.

When Ella asked if we could go for our first ride of the season, I was almost hesitant. In some way, I didn’t want to break the previous weekend’s quiet reverie, didn’t want to spoil the antiquated – if unnatural – peacefulness. But Ella persisted until at last I relented, and we found ourselves donning towels and sweatshirts to ward off the faint chill of twilight as we lowered the hoist and set the boat in the water.

It took nearly a minute for the engine to finally turn over, but at last I shifted into reverse and slowly backed us out of the hoist. (I might have turned the wheel just a bit too hard and nearly smacked the bow right into the side of the dock, but I didn’t. It was close, though. Like I said, docking – or, really, having the boat anywhere near the dock – isn’t exactly my specialty.) Moments later, we were cruising toward the middle of the lake, our hair racing behind us, grins bursting onto our faces.

I know these are all blurry – it’s hard to steer and use the “big” camera in a moving boat, people – but I adore them anyway.

Our maiden voyage lasted less than five minutes (in our excitement to finally get back on the water, turns out we’d completely forgotten to get life jackets for the girls. Oopsies!), but it was a glorious, warm, exhilarating, completely joy-filled five minutes. Maybe it’s growing up on the water, as I did, or maybe it’s something genetic, or maybe it’s just one of those funny coincidences, but Annie and Ella adore being out on the boat just as much as I do.

It may have been delightful having a boat-free weekend, but – man! – getting out there again was even better. While there are plenty of things about summer that I look forward to (not having to make school lunches, being able to sleep past 7:00, consuming more ice cream than a Ben & Jerry’s tester), few top the simple pleasure of being in the boat, with the wind in my face, the steady (or unsteady) rise and fall of the hull over the waves, the seagulls flapping overhead as we the glide by the emerald green shoreline.

Sharing that love of the water, of being on the water, with my girls?
Well that, my friends, is very, very good indeed. 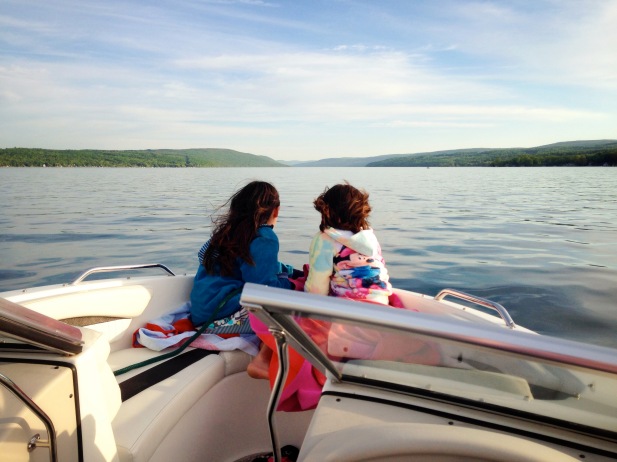 2 thoughts on “Going for a ride”