Four days ago, our family grew by one: we welcomed Fenwick, our fourth CCI puppy, to the fold. 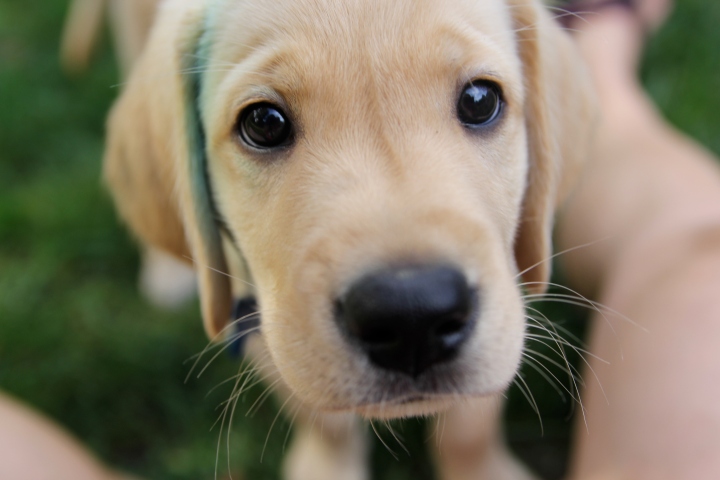 Don’t mind the green around his ear; that’s just a little extra ink from his uber-cool tattoo.

We’d been planning to get another CCI pup since before we turned Jambi in for Advanced Training, but a puppy wasn’t available to us until last week. We met him at the airport, a howling bundle of fuzz that couldn’t wait to get out of the kennel where he’d been cooped up for more than twelve hours. Annie had stayed home sick that day, so she ventured with us to get Fenwick; on our way home, we drove by their elementary school right at Ella’s lunchtime… so an impromptu meet-and-greet was held in the school parking lot. 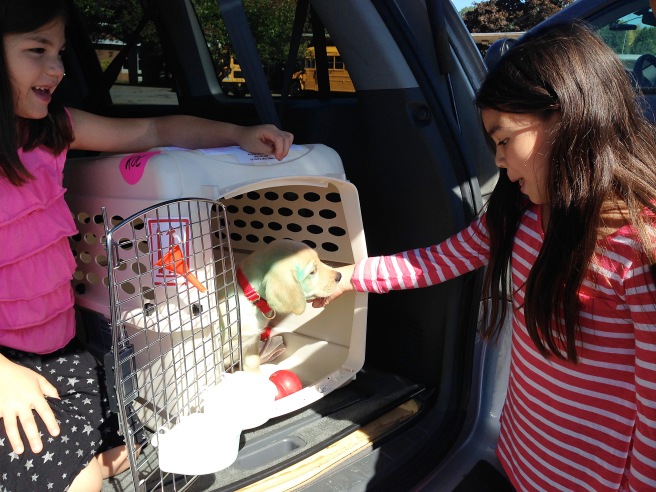 What? Don’t all the sick kids wear magician star skirts on their days home from school?

Half Golden Retriever and half Labrador Retriever, Fenwick (we don’t name them, btw, but I think his name is very dignified – in a Brit-lit kind of way – and pretty rad all-around) has a very clear Golden look. He’s absurdly fluffy and soft, not at all wiry like Labs tend to be, and by far the smallest puppy we’ve had. He is also crazy loud when he’s left alone and prefers not to be, screaming in a freakish way that is almost human. Aww, puppies!

The girls took to him immediately, declaring him “The cutest dog ever!” and cuddling with him and carrying him around in that way that children do with puppies and cats that makes you question whether small humans and small animals should ever share the same space. Then they play with him and help wash him and any Hey, you dropped me on the tile floor and could’ve killed me memories are all but forgotten. 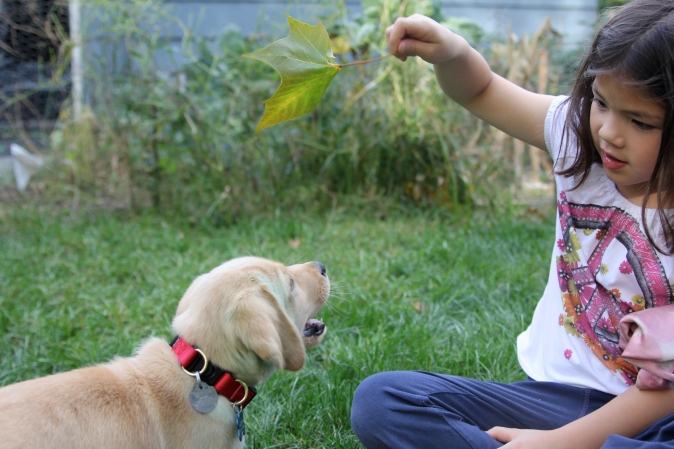 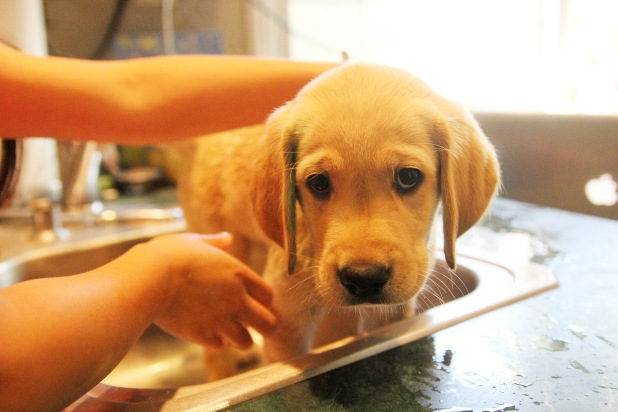 Okay, okay… so maybe peeing in my kennel wasn’t such a good idea…

Nick seems to think that Fenwick is just dandy, but he went out of town less than twenty-four hours after picking him up, so his opinion doesn’t fully count. Which leaves me as the lone hold-out who isn’t completely smitten with this adorable little furball.

I’m not sure why, exactly. I knew it would be difficult – eight week-old puppies almost always are. They wake you up at night to go to the bathroom, they whine when they’re displeased, they pee and poop in the house indiscriminately and sometimes wind up soaked in their own urine. (This is eerily similar to most two year-old humans.) They nip at your fingers and hemlines and shoes, they put everything in their mouths – especially the things that shouldn’t go there – and they are utterly unpredictable. (This is exactly like most two year-old humans, except it’s legal to lock them in cages.)

I knew all of this going in, and I was prepared. Cleaning up the umpteenth mess of the day (five minutes after I let him out and with absolutely zero warning or preamble) is exhausting – but that’s not really why I’m not crazy for this boy yet. I don’t dislike him – he’s got that delightful puppy breath and is and full of zany puppy energy and makes little grunting noises when you hold him and likes to drag a stick around the backyard that’s six times longer than he is, which cracks me up to no end. I’m just not all in quite yet. 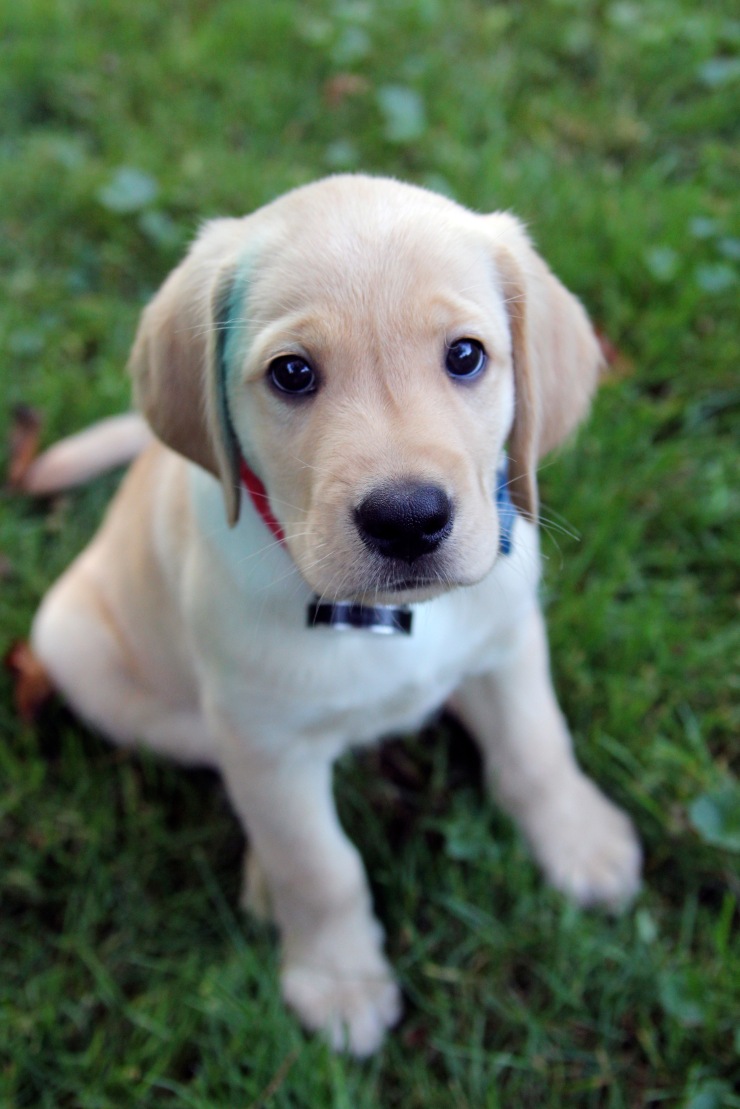 I think part of it is that we’re going out of town next weekend, so I’m almost afraid to put too much into it because I’m half-worried that he’ll forget us entirely in our absence. I’m also worried that he’ll still be up in the night and will be soiling the floors at regular intervals when our petsitter is here and, well, I’m just nervous, so I’m not jumping in fully to enjoy him. I think part of it is that I miss Jambi – not just any old puppy, but Jambi specifically – and when Fenwick’s personality diverges from hers, it’s a reminder that she’s gone, and that’s hard.

But I think the biggest reason I’m not totally head over heels for this puppy is that Langston isn’t head over heels, which is not at all what I expected. He and Jambi were ridiculously good pals, playing and lounging and napping together from day one. He’s also been really friendly with other dogs, though, so we assumed that he would love having a puppy around again – especially since he’d been practically bouncing off the walls with boredom since we turned Jambi in. When we brought Fencick home and introduced them, I actually said to Lang, “We brought you a present!” (Yes, I talk to my dogs as though they’re human. Preach it.)

To my dismay (and surprise), Langston doesn’t care. In some ways, he’s even annoyed by Fenwick – which, upon closer inspection, I guess I can understand. Fenwick bites at Langston’s wagging tail, causing him to yelp with pain; he attempts to gnaw on his hind legs as though they were teething toys; he jumps up on him in a never-ending game of Notice Me! Notice Me! Notice Me!

I’d been so convinced that Langston would be thrilled that we were bringing home another puppy, I didn’t even consider how it would feel if he wasn’t completely taken with the new dog. Turns out, I’d been putting a lot of stock into the two of them getting along, to being buddies, and now that it hasn’t played out that way (yet), I’m really bummed.

I say “yet” because I know that it’s only been four days… four days out of the sixteen months that Fenwick will be with us. He’s only a baby. We’re all still adjusting. Hell, he’s still on west coast time – jet leg will do strange things to a dog. I know that there’s plenty of time for Langston to come around – or not. Maybe they’ll never be the best of pals. But there’s plenty of time to adjust to that, too, and for me to fall in love with this smooshy little buddy simply because he’s him, rather than because he’s Langston’s companion.

And yet… Last night, I’d invited Langston up on the couch to chew the new favorite bear we’d gotten him, keeping it safe from Fenwick’s shark puppy teeth. A moment later, however, Langston had gotten off the couch – bear in mouth – and walked over to Fenwick… to play. With his bear. Langston wanted to play with Fenwick by sharing his bear. Oh, be still my heart!

They played longer than this, but I was so busy watching like a giddy buffoon for the first minute or so, I didn’t even think about grabbing my phone until Ella said, “Mom! Don’t you want to record this??” She is so my daughter.

You guys, my heart soared. So yeah, they only played together for about five minutes today, and that was only because Langston grew so tired of Fenwick trying to nip him to death, he decided to nip back and some dog-mouth-play ensued, but still. It’s a start! And a good reminder to me that, like people, no two dogs are alike – and it’s pretty unfair to judge one based on the other. Today, Fenwick ate all of his dinner (woo hoo) and let me know each time he needed to go out to poop, so overall, it feels like a win. He’s responding to his name and walking better on a leash and feels just absolutely perfect in my arms.

We’ll get there. I’m not worried. Neither is Fenwick. It’s all good – doggone it. 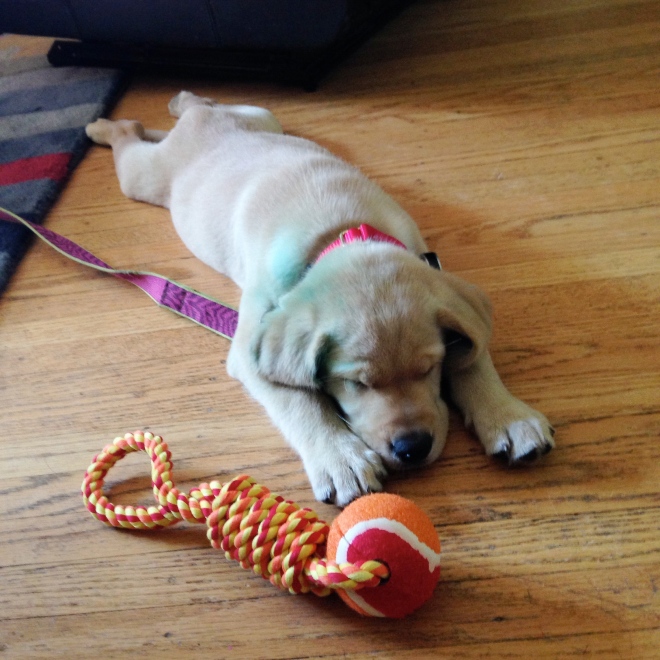 7 thoughts on “Make Room For Puppy”