It’s now been three weeks since we got Fenwick, our fourth CCI puppy, and I daresay things feel distinctly different than when I last posted about him. He’s becoming a true member of our household and raising him is turning out to be relatively easy*.

* I realized I just jinxed myself. Universe, please have pity on me.

Upon further reflection, I’ve come to the conclusion that there are several reasons why the adjustment to having another puppy around has gone more smoothly this time. To wit, in no particular order:

1) I’m no longer feeling detached, nor keeping my distance. Once I realized that’s what I’d been doing, I decided to knock it off. He’s not Jambi and that’s okay; he’s his own self and that self is pretty fantastic. 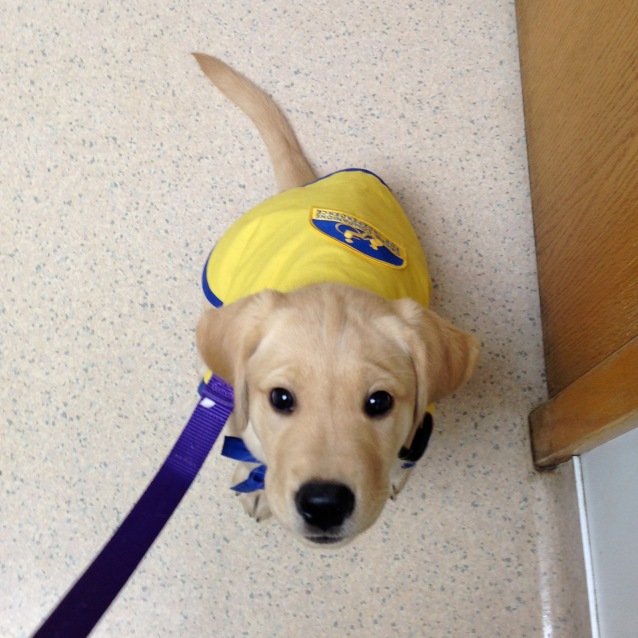 3) He still has puppy breath. (And very sharp teeth.)

4) He lets us know when he needs to do his business and then almost always waits until he’s outside to actually do it. THIS IS HUGE, people. Langston had a habit of asking to be let out, peeing like crazy, and then peeing again the instant he got back into the house or was put in his kennel. (Our CCI program manager actually had to ask us not to bathe him so often because it was bad for his skin, so we resorted to hosing him off a couple of times a day.) Jambi went through a lovely stage where she would poop in her kennel at night and not let us know; I’d “discover” it when I’d awaken to use the bathroom and would be overpowered by the stench. So, Fenwick asking to go out and then doing his business outside? GENIUS.

5) Speaking of genius… he’s smart. He totally knows his name, responds to the “sit” and “here!” and “Let’s go!” commands, and has mastered the art of sitting, waiting, and then being given the “okay” command before he eats his meals. He also walks on a leash quite nicely now; we’ve managed to make it a whole ten minutes up the street before he gives up and needs to be carried.

6) He’s a total imp. He knows the “here” command but will purposely dart away from me if he’d rather play outside. He pulls the girls’ swim towels off of their drying spots, drags them around the kitchen, and then lies down in the middle of them. If you’re not watching very closely, he’ll slip out of any open gate or door to follow you. He’s a twerp. 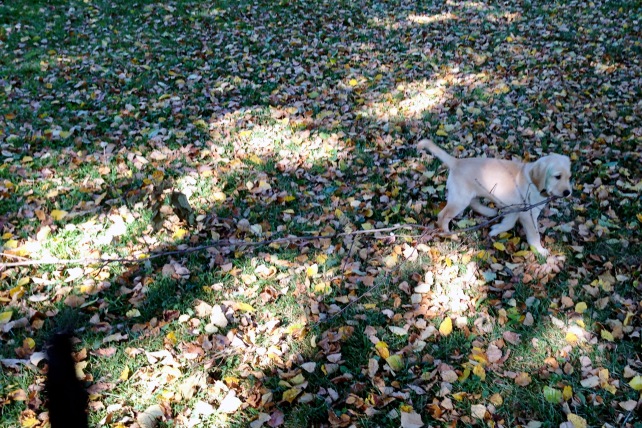 Dragging a stick that’s three times his size because he is a COMPLETE GOOFBALL.

7) He talks. I don’t mean that he barks or is just plain noisy (although both of those are true), but that he vocalizes often and it sounds just like a human being – but not in a creepy, disembodied way. More in an adorable, “OMG, he sounds like a cross between an Ewok and a Wookiee!” kind of way. (Yeah, yeah, I know that those are technically not human… but they were voiced by humans. Point for me.)

8) I’ll deny I ever said this, but he just might be sleeping through the night. You didn’t hear it here. Nope.

9) Langston has changed his tune and has decided that Fenwick is a pretty fabulous playmate. Lang brings toys over to play with him, gets all dog-mouthy with him, and gleefully flings him across the floor when enough is enough. He’s even willingly sharing his bed and not trying to curl into a tight ball in the corner so he doesn’t have to touch Fenwick. OH HAPPY DAY.

10) Ella and Annie help. THIS IS A GAME CHANGER, Y’ALL. With our first CCI pup, Diamond, they were really too young to do anything besides avoid becoming chew toys. With Langston and Jambi, they wanted to help, but were either too little to be too effective (the pups were too heavy to carry, they couldn’t reach the food) or got bored ten seconds into working on “down” and would walk away, leaving the puppies chewing on couch cushions in the living room.

This time, not only are they capable of pitching in, they actually want to participate. Feeding the puppy? Not a problem. Letting him out, even on short notice (“He’s about to have an accident! Go go GO!”), and then watching him so he doesn’t get into trouble? Done. Patiently working with him on learning his name? Okay, so maybe they weren’t patient, but they definitely offered assistance. Knowing how to handle it without falling apart when Fenwick nips at their toes or chews on the hems of their bathrobes? You bet.

The other day, Ella decided that the puppy was getting a bit stinky, so she gave him a bath – in the shower, by herself – and then toweled him off and brought him back downstairs. Yeah, she mixed his dirty, hairy towel in with hers, but she hung them both up so I consider it a total win. Heck, one time, Annie even cleaned up after Fenwick when he peed inside… and then sprayed the floor with disinfectant. As you can see, this is all kinds of awesome.

So, to sum up, if you want to raise a puppy and have the experience be particularly excellent, I highly recommend that you a) get a really cute dog, b) get a smart dog that makes you feel like a super-competent trainer, c) get a dog with personality so you can laugh it off when they try to chew through the handle of your new rake, and d) above all else, have a seven and nine year-old on hand to assist you with all of your puppy-raising needs.

Except for getting up in the middle of the night and picking up poop. Those are still on you. At least this adorable face will make it more bearable. 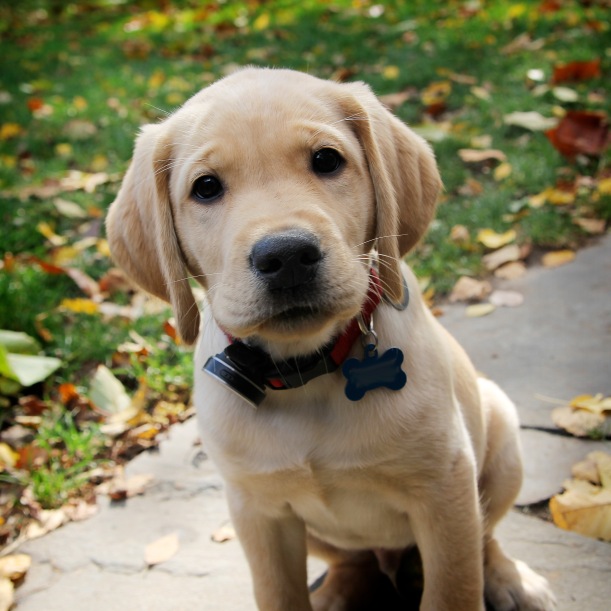 3 thoughts on “Settling In”