It all began so beautifully – and I mean that both literally and figuratively. Yesterday was glorious, that late fall kind of day when the sunlight filters through the almost-leafless trees, creating a hazy kind of magic everywhere you go. The temperature flirted with 65 – unheard of this time of year – and felt so glorious, it made you forget that winter is coming.

The girl and I had the entire day to ourselves (with many, many thanks to our veterans), and we filled it to the brim with things that gave us genuine happiness and joy. We ate breakfast at a local dairy/bakery (their hot chocolate is unbelievable). We went on a bike ride – we hadn’t been on one in ages – on a gorgeous bike trail right near our house, marveling at the scenery and stopping for a picnic lunch right by a wooden bridge overlooking a river. We took in Big Hero 6 in those newfangled (they may not actually be new, but I get to the movies so infrequently, they feel new) reclining chairs that allow you to lie back and settle in and feel like you’re the only ones in the theater (except for when your daughter crawls into your seat with you because the sweet little animated film becomes SO RIDICULOUSLY EMOTIONAL she cannot sit by herself, but you don’t mind because the seats are big enough to cushion both of you while you’re holding one another and SOBBING, THANKS SO MUCH DISNEY).

It was, by all rights, the perfect day… set to end the perfect way, with breakfast for dinner (waffles with blueberries and real maple syrup). Yes, the movie didn’t end until 7 p.m., but waffles are quick and easy; surely we’d be done with dinner by 8:00 and then we would listen to the newest Percy Jackson tome (we’re onto the fourth in the series now) and the girls would settle into bed at a reasonable hour and I’d have the evening to myself and it would be… heavenly.

Until all hell broke loose.

I really don’t know what happened, because one minute we were cheerfully discussing teleportation (as though I actually know what I’m talking about, la la la) and how everyone grieves in different ways (yes, heavy talk for a FREAKIN’ ANIMATED FILM) and the next, pancake batter was bubbling up from the bowl and onto the counter, there was blood all over the floor, and there was wetness everywhere I turned.

It all started when I realized that the waffle mix we had in the cupboard might not be enough to feed the three of us, so I set out to making batter from scratch – which should have been no biggie, but we were missing a couple of the ingredients, so I needed to improvise. Twenty minutes went by as I scrounged for applesauce and milk and eggs when all of a sudden there was this noise – this terrible, hissing, shrieking thing – that I soon discovered was coming from our dogs, who had somehow gotten into a scuffle in the middle of the kitchen. I managed to pry them apart, but not before one clipped the other (with his teeth? Claws? I don’t even know), something we learned when little drops of bright red blood began appearing all over the kitchen floor.

Given that time was rapidly ticking by, making the waffles would normally have taken highest priority – but, let me tell you, when there’s a trail of blood across the kitchen, dinner prep pretty much comes to a halt. Another twenty minutes later, the bleeding had stopped, the floor was clean, the dogs were separated, and I finally got down to the business of making the waffles. The first batch went into the waffle iron at 8 p.m…

… and at 8:10 (yes, it took ten minutes to cook all the way through), that batch looked like this:

I don’t know if it was that the batter was gluten free, or if it was my improvised ingredients, or if it was the fact that my waffle iron is old and endorsed by Emeril and actually says BAM! across the front, but these suckers would neither cook nor come out of the iron once they were done. As much “fun” as it was painstakingly picking the pieces out with a fork, it was clear that dinner wasn’t happening any time soon.

By 8:15, it dawned on me that however much baking mix remained in the cupboard was probably enough for dinner – by now, we were all so hungry and tired, our appetites had vanished – so out came the ingredients for the generic GF Bisquick. Meanwhile, the original waffle mix had tripled in size in its bowl, rising like a yeast-filled dough (maybe it was because I guessed at the amount of baking soda and baking powder?), and as a result had slid down the outside of the bowl and was forming a puddle of waffle soup on the counter. As I went to clean up the mess, I knocked over the milk that I’d neglected to put away (and which, of course, was not closed), which sent it sloshing onto the floor.

Thankfully, the new batch of waffles cooked much more efficiently than the first (and they came out of the waffle iron successfully, too), which was a relief because I didn’t have time to tend to them once I noticed that the dogs’ water bowl-system had somehow spilled from  its container into the “protective” plastic bin in which it sits and had somehow overflowed from that bin, too, completely soaking the (other) counter and all of the dogs’ leashes. (The water is kept up off the floor so that Fenwick can’t monkey with it. ‘Cause that would really be a mess.)

As I lamented each unfortunate turn of events, the girls sympathized but largely stayed out of the kitchen (probably to spare themselves from becoming the target of any further mishaps). At one point, however, Annie strode purposely into the Danger Zone to tell me that she had the perfect name for what was going on: Ella, Annie, and Mommy and the Terrible, Horrible, No Good, Very Bad Hour.

She was right. If it could have gone wrong, it did – but in the end, it was only an hour. We were so fortunate to have had the perfect day that came before; surely one bad hour wouldn’t spoil it. I’d like to think it actually helps us become more grateful for the good that we do have – you never know when things are going to change, so you’d better appreciate and marvel and wonder while you can.

Indeed, today it was gray and 40 degrees and so brisk and windy, I still haven’t quite warmed up from volunteering on the playground. That didn’t stop me from having ice cream for dessert, though – topped with crumbled bits of super-toasted leftover waffles. You know what they say – when life gives you extra, rubbery waffles, make waffle cones. BAM! 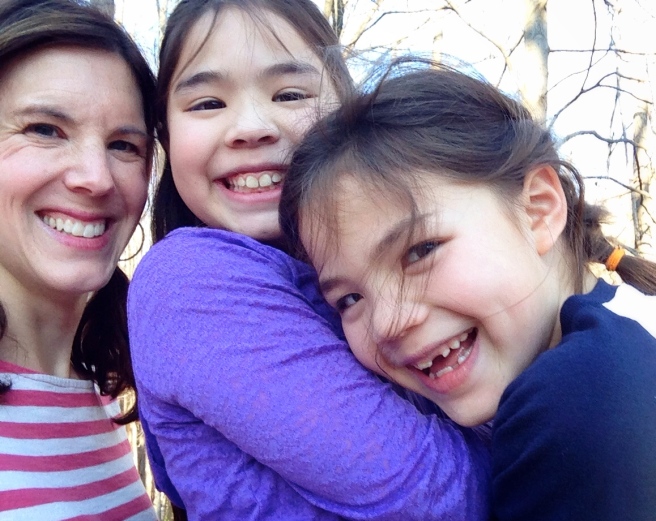