Every year, we visit the same Santa Claus. I don’t just mean the same place or the same general “Santa,” but actually the very same human being. We discovered him a good many years back when we went to get our Christmas tree at a local nursery and stumbled upon a Christmas Open House they were hosting. 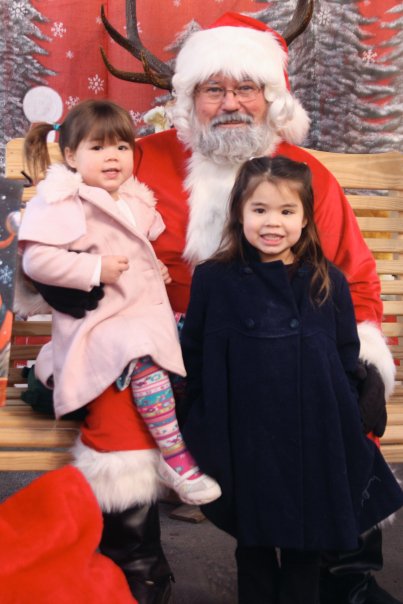 The great part of this is that “our” Santa actually remembers the girls, which makes them feel pretty fantastic. (It doesn’t hurt that Santa hands out little goodie bags filled with candy, a coloring book, and these awesome glasses that “react” to bright lights and make it seem as though snowflakes or gingerbread men are dancing around the bulbs of your Christmas tree. Side note: wearing these glasses while driving is not advised.) The best part of this – or so I thought – is that Ella and Annie believe, to their core, that this is THE Santa Claus, so they feel like they’re in on a secret and basically the coolest, luckiest girls on the planet.

(They will tell you, point-blank, that the other Santas – the ones at the mall or on TV at the Macy’s Thanksgiving Day Parade – are merely helpers, perhaps associated with The Big Guy himself, or perhaps just actors dressing the part. This doesn’t bother them or make Santa less real; they understand that one man can only be in one place at a time, duh, so there simply have to be understudies and stunt doubles.)

This belief began because “our” Santa has a real beard, unlike the Santas they’d met previously. It was cemented because they’ve seen photo evidence of Santa delivering presents to our house on Christmas Eve and (coincidentally) The Real Mr. Claus looks remarkably like the Santa at our local nursery.

I will fully accept responsibility, and declare myself guilty, for this deception because Annie and Ella’s belief in Santa – their desire for him to be real – is so strong and deep, I am willing to do almost anything to protect it; this is a ruse that I am absolutely willing to perpetuate. But as for the photo Santa resembling “our” Santa? MAMA GOT LUCKY THERE, FOLKS.
If you want to be magical like me, check out this website.

When we arrived at the Christmas Open House on Saturday, our sole purpose was to see Santa; we’d already gotten our tree last week, so we only planned to stay for a few minutes, chat with St. Nick, grab the goodies, and leave. The moment we approached him at his bench, his face brightened and his smile beckoned them over.

“My gosh, how the two of you have grown!” 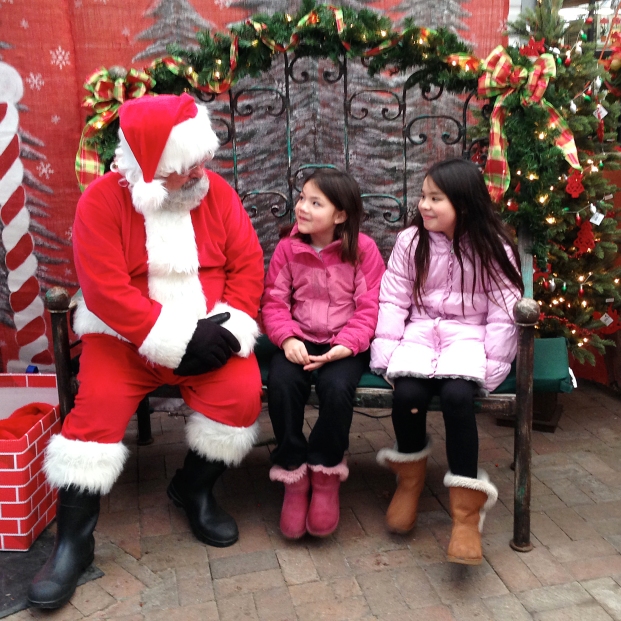 He invited them to sit beside him and they made a little small talk, during which Santa mentioned that “your elf has been filling me in – he says that you’ve been pretty good this year!” Ella snuck a glance my way, one that showed me she was thinking what I was: How the heck does Santa know for sure that we have an elf (on the shelf)? We do, but wouldn’t that kind of blow his cover if we didn’t?

Naturally, Jolly Old St. Nicholas asked the girls what they’d like for Christmas. Annie listed her three items (the agreed upon appropriate number) and then Ella had her turn, telling him she’d like “an electronic writing thing” (actually a Boogie Board; Santa said he’d talk to the elves about it), a bracelet maker, and an American Girl doll. He laughed at that one, asking her, “Didn’t you get one of those last year?” She laughed back and agreed that she had – to which he replied, “But you can never have too many of those, can you? You need another to keep the first one company!” – and then she shot me The Look again.

Because, yes, she had received an American Girl doll last year, but it seemed unlikely that “Santa” would have remembered such a thing 365 days, and countless visitors, later. It seemed especially unlikely because Ella had never mentioned it to Santa at all; Nick and I had given her that doll last Christmas.

Soon enough, their visit was over, hugs were had, goodie bags were doled out, and the girls were by my side again, with both of them immediately saying, “How did Santa know we got American Girl dolls last year??” To which I replied, very honestly, “I have no idea.”

They were silent for a moment, thinking, when they both looked up at the same time and said, “Then he really MUST be the real Santa!”

Still dazed from the mystical Santa visit, I noticed that the nursery was selling well-priced poinsettias and Christmas cactuses (cacti?), which we give to the girls’ teachers each year, so I sent them over to look at the plants and select the ones they wanted. Meanwhile, I approached the cashiers for a large box in which to put our purchases. As I waited, The Man With All The Toys left his post and came up to me.

“I just wanted to thank you for bringing your daughters here every year. It means a lot to me.”

Oh, my goodness. Thank YOU so much for remembering them!

“How could I not? They’re beautiful and polite, and I love seeing how they grow!”

Thank you very much. Visiting you is one of our Christmas traditions each year. I know they won’t believe forever, but for now, they do, and you make magic for them each time we’re here. Thank you for the magic.

“Well, I certainly try. We all need a little magic.”

I still have no idea how he knew that we have an elf on the shelf, or that Ella and Annie received American Girl dolls last year. It could have been dumb luck – it probably was dumb luck – but it was pretty uncanny. Whatever the reason, my girls came away from our visit floating on air, certain that Santa Claus himself had just given them a hug and told them that they’d been good this year.

And hey… you just never know.

Christmas magic, my friends, indeed. That is the very, very best part. 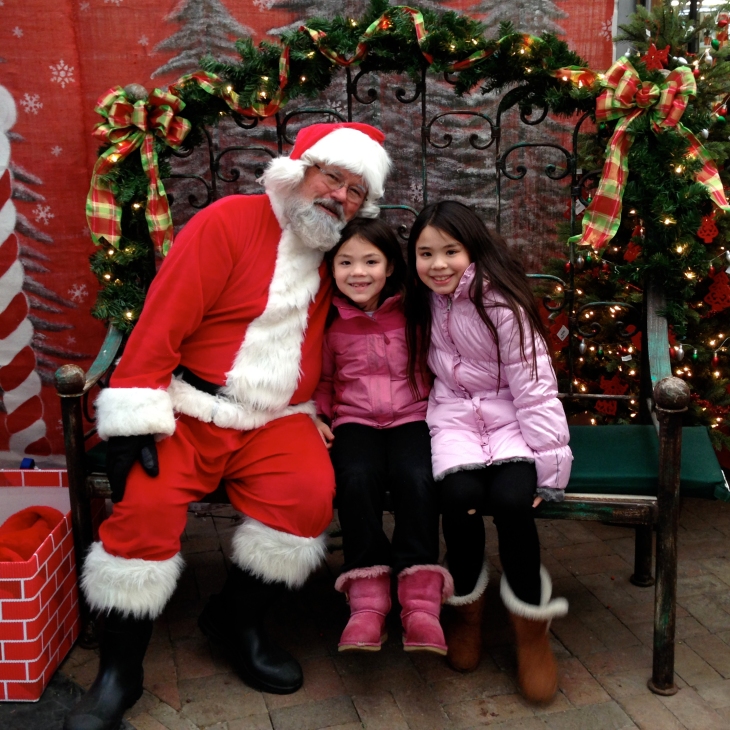