Six days ago, we were slammed by a ferocious windstorm. Not a series of tornadoes… Not a hurricane… Just wind. TONS of wind that barraged the region relentlessly for hours. Topping out with gusts at over 80 miles per hour (yowzers), these were no gentle breezes. Trees weren’t just snapped; they were uprooted, literally. Power was knocked out to over 150,000 homes. Utility poles bent and broke, sending power lines flying. (Amazingly, we never lost power.)

These were just a few trees within a half-mile of our house; to see truly incredible images, check out this, this, and this.

If you did venture out, everywhere you turned, you’d run into stately pine trees on their sides accompanied by gas and electric (and tree trimming) crews working overtime. We don’t get a lot of natural disasters in Rochester – the lack of hurricanes, tornadoes, avalanches, earthquakes, tsunamis, and forest fires is a definite plus of living here – so this was a rather unprecedented occurrence.

It was a damned mess.

On the second “wind day,” the girls and I did something I’d been wanting to do for ages: brought flowers and notes of support to the JCC and Islamic Center. When I asked about other places that might need assistance, a friend suggested that we spread a little cheer to local fire stations, who were fielding emergency calls left and right, and gas and electric linemen who were working feverishly to restore the area to power. We did both, to astonished appreciation. It was kind of rad.

The following day was Annie’s Girl Scout troop’s cookie booth sale, which meant three hours of 4th grade girls freezing their tushes off in 18-degree snow while hawking boxes of Thin Mints from the gas station sidewalk. It was kind of surreal, cheerily shouting about cookies while watching people load up on bags of ice and cans of gas; obviously, 72 hours post-windpocalypse, there were still a lot of folks without power.

As a means to both move the cookies along and give us all a greater sense of purpose (not that Peanut Butter Patties aren’t life-changing), we set up a collection for boxes of cookies to be donated to gas and electric crews. The response was overwhelming; our box was overflowing. It seems, when faced with times of crisis, helping feels really, really good.

Although our troop leader was able to deliver the bulk of the cookies over the course of the weekend, five additional boxes were donated last-minute. I bagged them up and stuck them on the front seat of my car, assuming, one way or another, that I’d come upon some utility folks sooner or later and could hand over the goods.

Because Jesus loves me, school was back in session yesterday. Today, however, we are being walloped by the edges of the blizzard-y storm that is thrashing away at Philly, New York, and Boston. With the governor declaring a state-wide state of emergency that called for no unnecessary travel and 12-18″ of non-stop snow predicted over the course of 36 hours, the district called official snow days today and tomorrow.

Yes, this means four cancelled school days in less than a week. Yes, this also means we have spent a boatload of time together.
Ask me how well my daughters are getting along.

By 8 a.m., I’d decided that a Starbucks run was definitely “necessary” travel; my survival (and sanity) depended on it. It took me three hours to accomplish the rest of the stuff on my list, but shortly before lunch, Ella and Annie and I braved the roads to make quick stops at Target and Starbucks.

The roads were bad. I would’ve felt really crappy if I’d slid off the side and, when asked by the first responders why I’d ventured out in these conditions, I’d responded, “A latte.”

After explaining to the girls why this would not be a leisurely shopping excursion, I sheepishly admitted we really should get back to the house ASAP, with one caveat: if we happened upon any gas and electric crews, we’d lengthen our sojourn to drop off the cookies.

The roads were all but deserted (yet another sign that perhaps a latte wasn’t really “necessary”). The Target parking lot was much the same, with one notable exception: eight large, flashing-light bearing vehicles, idling side by side. The moment I glimpsed them, I startled the girls with a hearty, “OMG ARE THOSE GAS AND ELECTRIC GUYS?? WE’VE HIT THE MOTHERLODE!”

Can you see the trucks back there?

We drove slowly by to get a closer look; the cabs of the trucks were empty, save for one guy on his phone and another taking a snooze at the wheel. I didn’t recognize the name of the company (National Grid) but a quick Google search told us they were, indeed, a gas and electric outfit. Gleefully, we took the car back toward them, coming to a stop in front of the gentleman we’d seen on his phone.

He exited his cab as we rolled down the window. (Considering we’d basically stalked him in the Target parking lot, he was understandably wary.) “Can I help you?”

So we explained – about the booth sale, the donations, driving around with the cookies. When we handed over the bag, his face registered only shock.

We told him we were – very sure, in fact – but he was still incredulous. “You don’t understand. We’ve been here for a week. We’re eight hours from home and still can’t go back yet. This is the first time anyone has done anything like this. I honestly can’t thank you enough.”

He looked, standing in the wind-whipped snowstorm, as though maybe he might break down. Over a bag of Girl Scout cookies. Over people showing gratitude.

We explained further that it wasn’t so much us delivering the cookies and our thanks; it was the community, everyone who had donated the boxes and wanted to help. He truly could barely believe it. We exchanged a few more pleasantries and thank-yous and then were on our way. (Hey – at least now, if I slid off the road, I could say that I’d gone out for a latte and to hand over cookies.)

After the girls and I finished our shopping, I was placing our Starbucks mobile order (what? You thought we’d skip out on the lattes?) when I wondered aloud if I could put in for one of those ginormous box-o-coffee dispensers to bring to the National Grid crew on our way back… but there was no sign of them. They’d gone.

The rest of the (slow, slippery) drive home, we talked about the kind of person it takes to leave their families and travel to help others in times of crisis… how we wished we could do more to thank them… And then, just as we turned into our neighborhood, less than a quarter mile from home, there they were. 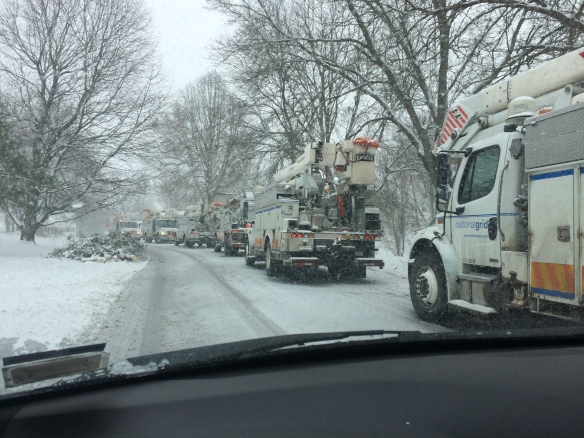 I kid you not: a veritable fleet of National Grid trucks were lined up behind one another, lights on, crews out. (We soon discovered two more trucks were parked in our cul-de-sac.) The very same guys! It was our turn to be astonished. This one little crew from eight hours away… working in the Rochester area for a week… less than 30 minutes after we’d seen them in the Target parking lot and wished we could do more… was working on our street?? WHAT WERE THE CHANCES?

Since Fate had clearly spoken, we knew what we had to do: get these men a warm beverage. Which is how we found ourselves dispensing hot chocolate to the National Grid crew in the middle of a snowstorm.

The guy said to us, “I can’t tell you how much we appreciate this. Some people have been really rude to us. This is so nice.” WHY ARE PEOPLE RUDE TO FOLKS DOING THE HELPING?? WTF?? 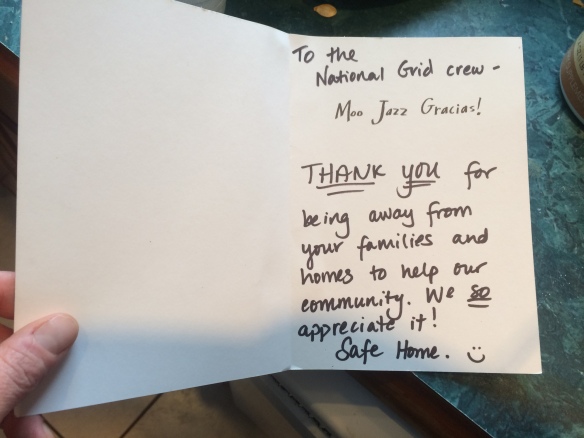 Best. Snow day. Ever.
(It’s also Pi Day and we have two chocolate pies for dessert, so there’s that.)

I know there’s a lot of scary, mean, selfish stuff going on right now. I know – I do – how easy it is to slip into frustration, anger, despair. But I also know a really easy way to feel better: thank someone. Help someone. Do something for somebody else. It’s clichéd, but it’s true. Doing good feels good. Really simple math.

No, it won’t solve everything (and with another snow day tomorrow, my cherubs might face off, Hunger Games style). But I am positive that if we were all just, I don’t know – NICER – that we really could change the world. Or at least our windy, snowy corner of it.