Skip to primary content
Dear God,
.
As you know, when I became a parent, I had hopes and dreams for my kids. Some of those were the usual growing-up wishes (be healthy, learn to tie their shoes, not get suspended, win a Nobel prize). Others were more specifically related to my desire for them to dig the stuff that I dig.
.
I hoped they would love snow instead of curse it. I crossed my fingers they’d like games and puzzles, envisioning late night hands of Hearts or all-family Scattergories battles. Enjoying chocolate fell somewhere between a want and a necessity; I could probably have let it slide if they agreed that bacon makes everything better.
.
Ella and Annie have fulfilled those hopes, and then some. They have their own interests, of course. And they certainly don’t like everything that I do. (I had to go through some actual mourning when I finally came to terms with the fact that they are probably not summer camp kids and will likely never sleep away at my childhood haunt.)
.
This makes it all the sweeter when they genuinely fall in love with something that makes my world go ’round. I mean, their enjoyment of most things Disney has totally made their teething days worthwhile. But it was what happened last Sunday – and my realization that they share one of my passions as deeply as I do – that made me decide to write to you.
.
My girls are musicals maniacs.
Just like their mama (and their grandmama before). 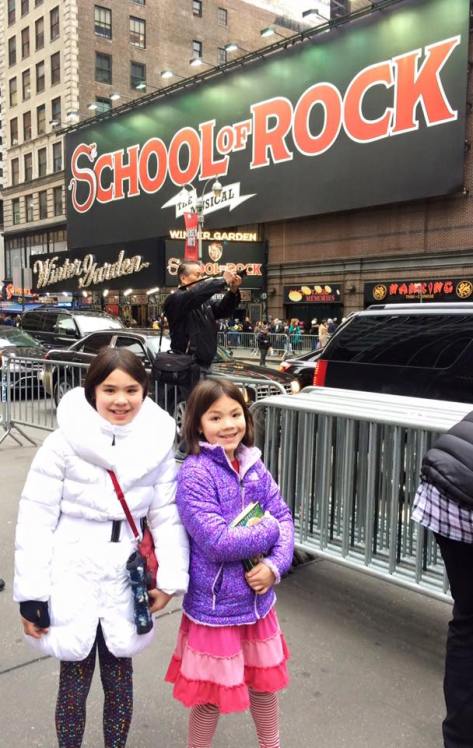 School of Rock, 2015
.
Growing up an hour outside of Manhattan, my family and I were fortunate enough to make it to the Big Apple several times a year to see the musicals on the Great White Way.
My mom was a theater major in college – which, in my eyes, made her all-knowledgeable. Whenever possible, we would sit in the front row of the balcony or mezzanine so that she could point out the stage markings. I was fascinated to learn that miniature Xs indicated STAND HERE, thrilled every time I could see someone waiting in the wings.
.
It wasn’t just the performances, however. Before that curtain ever went up, this feeling would begin to build. (Not loathing; trust me.) It began with seeing the show’s name glittering on the marquee, increasing as the ushers greeted us at the door and continuing to grow as we stopped at the concession stand (you think we missed an opportunity to grab Junior Mints, Milk Duds, or Peanut M&Ms? Think again). 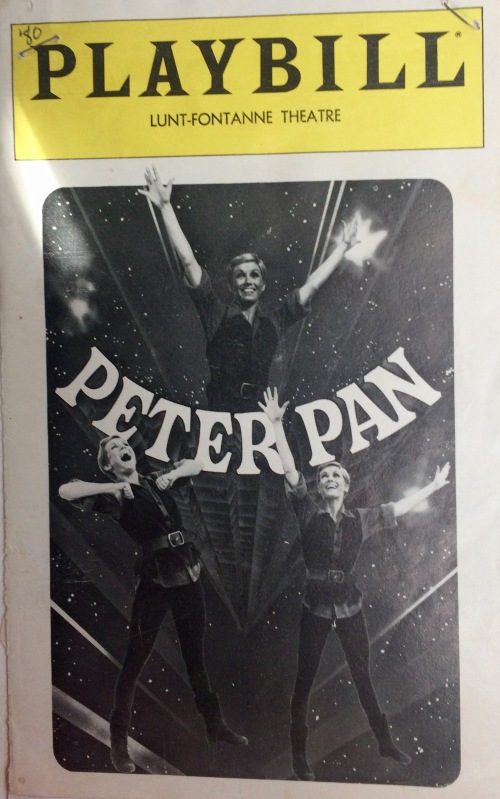 Every theater in my memory is adorned in velvet, with plush carpeting wall-to-wall, curving staircases, chandeliers, gilded portraits. Although we scarcely dressed up for other more formal locations (*cough* church), we always wore “something nice” to see a Broadway musical. Which, come to think of it, was kind of like church to me.
.
When I close my eyes even now and imagine settling into my seat (always too small and uncomfortable), then hearing the opening strains of the overture prior to the curtain rising… that same feeling, that rush of adrenaline, fills me. Something was starting – something organic, something unique to that moment; an exchange between the performers and the audience, where we could be lead into a world that, minutes ago, didn’t exist. It was redeeming and transcendental. I came alive and was made new, whole, believing. 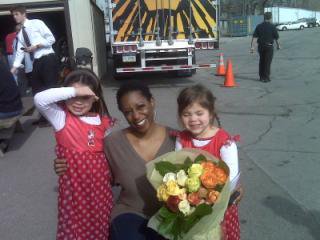 Meeting the cast of the incredible Lion King touring production, 2011
.
Over the years, there were hits and misses. We walked out of at least one production but saw others twice out of sheer adoration. I was in high school when Les Mis and Phantom rose to popularity, which meant I was at that perfect, angsty, drama-prone age where it actually sounded romantic to be seduced/kidnapped by a mystical, abusive, masked madman or ponder being forever on my own (pretending he’s beside me). For hours, I listened to those shows’ soundtracks in my bedroom, poring over every heart-tugging word, every climactic chord change, every piercing harmony.
.
I prayed over musicals.
.
As luck/fate/You would have it, Nick is not a Broadway fan. He tolerates most musicals and, at least once a year, somewhat grudgingly accompanies me to a show – but they’re really not his thing. (He says this is because he acted in so many musicals growing up, he got them out of system. I say this is because he’s a poop.)
.
Despite Nick’s lack of interest, I knew I was going to do everything possible to try and indoctrinate my girls to the wonderful world of Broadway. The soundtracks to Joseph and the Amazing Technicolor Dreamcoat, Annie, and The Sound of Music were in regular rotation when they were little. Instead of watching cat videos, we’d huddle around YouTube and watch clips from the Tonys. (And, okay, also cat videos.)
.
When Ella was four, my mom, stepdad, and I took her to her first Broadway musical (The Little Mermaid). I think she liked it, but really, what I remember most is how I forgot that traffic would be an absolute bear after a matinee, meaning it would take three times longer than usual to drive home and perhaps packing a snack or taking a bathroom break before loading up for the drive would have been a good idea.
.
My ears still hurt from the screaming. 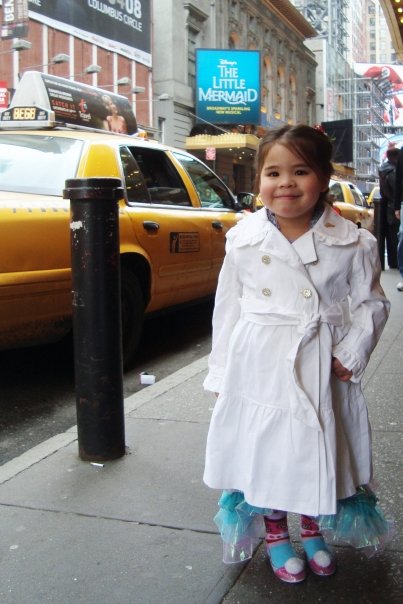 BUT LOOK AT HER OMG
.
That was the beginning. At least once a year when we visit my mom, we are fortunate enough to take the girls to a musical on “actual” Broadway. The girls’ first joint show was the same as mine – Peter Pan, seen up close from the orchestra with Peter (her)self flying overhead. I’m not sure they were hooked, but it definitely made an impression. Rochester is also a super theater-appreciative city, with excellent touring productions coming through. The girls usually look forward to going, but until recently, I wouldn’t have said they loved it like their mama. 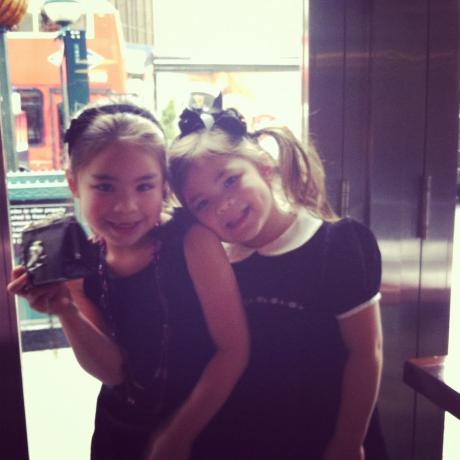 Dolled up for Peter Pan, 2011
.
Within the last couple of months, though, something seems to have changed. Maybe it’s general Hamilton mania… maybe it’s just that they’re older… but their musicals radar has suddenly tuned in. They notice which shows are playing and at which theater. They talk about how they’d like to see a particular production, but they’d “really like front row balcony seats because they’re the best, right mom?”
.
(Sorry, God. I’m working on humility.)
.
I had taken them to see Wicked when it was here in 2012. At 6 and 8 years old, they liked it well enough, but they didn’t truly get its complexity and humor. When I learned that the touring production would be returning, I knew we needed to see it again.
.
In advance of last weekend’s show, we prepped (as we always do) – reviewing the characters and plot, listening to the soundtrack, researching the actors’ biographies. As the Big Day drew closer, Annie’s anticipation intensified. Out of nowhere, she’d be standing in front of me, fists clenched in jubilation. “Mama! I Can’t believe it’s only two days till Wicked! I AM SO EXCITED!!!.” 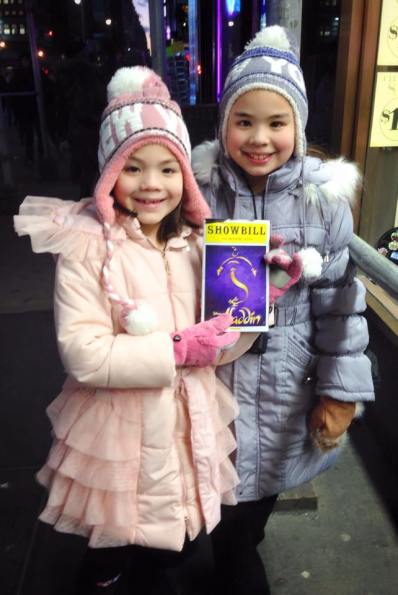 Aladdin, 2014
.
At last, Sunday arrived (none too soon for Annie). Worried that the production’s intensity might be too much for her, I offered to sit between her and Ella – but they wanted me on the aisle, with Annie farthest in. From the flying monkeys’ appearance to Elphaba and Fiyero’s departure, I couldn’t pry her eyes from the stage. She was entranced, for good.
.
Ella, on the other hand, routinely interacted with me, pointing out costume changes, unexpected staging, and raising her eyebrows with approval whenever someone nailed a difficult part. She also seemed to be looking somewhere other than the stage, although I couldn’t tell where until intermission when she breathlessly asked me what “the man was doing with all those buttons.” After learning that he was the gentleman in charge of the sound/mixing board, she was enthralled. “He’s making that happen?? THAT IS SO COOL.”
.
When the final bows had been taken, Ella slipped her hand in mine as we exited the theater. “Mama. That was so good.”
.
“It really was, kiddo, wasn’t it?”
“Yes. I mean… it was really good.”
“I think so, too!”
“Can we see it again?”
“Sure! Next time it comes to Rochester, we’ll get tickets.”
“No… I mean, like, tomorrow…” 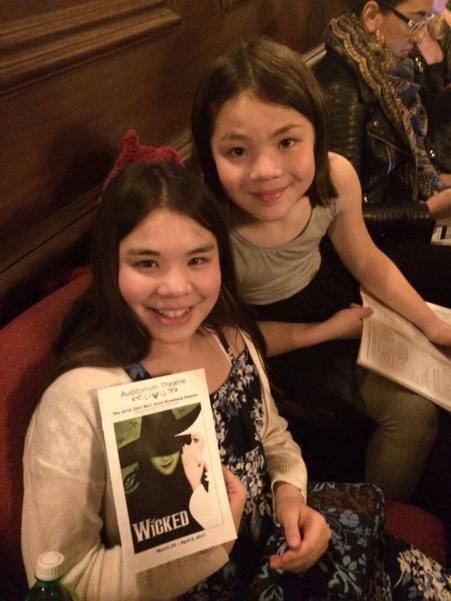 .
Ohhhhh. I get it now.
My girls have found in Wicked what I found in Les Mis and Phantom. They’ve been bitten by the musicals bug. SWEET FANCY MOSES.
.
In the week since the production, “Popular” and “Defying Gravity” and “What Is This Feeling” have been sung nonstop. They’re researching which show they’d like to attend when we visit London next summer. They and some friends are also working on a full-scale backyard production of Hamilton, complete with choreography, props, lighting, and costume changes. 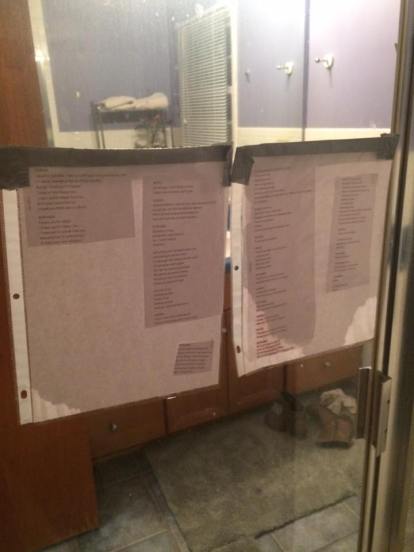 Yes, they taped the lyrics to the shower. Multitasking at its finest.
.
In short, they’ve come to church.
.
Thanks, God, for this glorious turn of events. They may never go to sleep-away camp, but if I can share musicals with them, it’s more than a fair trade. 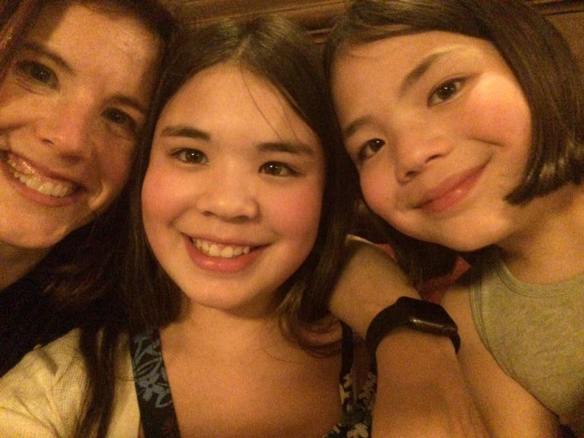