So… I used to do this thing called Writing A Blog. Not on a schedule, but regularly. It was rare to go more than a few weeks without posting.

Then I fell and got a concussion and using the computer (or any screens) made me feel totally gross, and suddenly more than half a year went by and when I tried to start writing again, I couldn’t even remember how to access the blog page anymore.

For several months, I stayed away from my computer almost entirely except for very short busts to do Important Business like online banking and making vacation reservations. Writing a blog was virtually impossible. As the weeks went by and using screens bothered me less, I dedicated my increasing screen time to things that actually had deadlines, like the school yearbook or Mother’s Day or, like, pumpkins (I mean, if I didn’t take the time to scour Pinterest for carving ideas, October would’ve come and gone and our pumpkins would’ve been boring and that will simply not do).

When I began to feel well enough to spend screen time doing NON-deadline things – editing photos, making summertime videos – blogging fell to the bottom of the list. I felt guilty spending time writing instead of creating the Shutterfly book I’ve promised our dear friends’ son for his Bar Mitzvah. Which was in May.

It really was an amazing affair… I need to create that book.

So I just… didn’t write. I didn’t post. And the more I didn’t do it, the harder it became to start up again. There are probably a dozen “WRITE BLOG POST” entries in my To Do book, all dismissed in favor of everything listed around them. I reasoned that I was still kind of writing – my Facebook posts aren’t exactly brief – and that was enough.

But I missed it. I missed this space. I just couldn’t figure out how to return. The ideas I had for posts seemed either too big (if I wrote the mammoth entry about our summer vacation switch-up, I couldn’t spend that time making my family’s annual Lake Book… from 2016…) or too insignificant (the morning when Ella glanced back and waved as she walked to the bus was deemed un-blog-worthy; I posted on Facebook instead). Nothing was right.

But last week, I received a message from a reader of this blog – someone I didn’t even know was out there – who asked how I was. She’d noticed the six month absence and was concerned. Plus, she liked reading what I had to say, and hoped I’d write more.
Stunned, I replied to her comment – then noticed a string of others saying much the same.

Apparently, when you put things out into The Interwebs, people sometimes find them. WHO KNEW.

So here I am again – but with a new outlook. Four years ago, when I started writing in this space, I blogged several times weekly about anything that came to mind. At the beginning of 2017, I wrote only every few weeks… and then only when I felt I had something Of Great Importance to say.
Both approaches, I realize, are crap.

I mean, they’re fine as general concepts, but they’re crap for me. One of the things I’m working on (like, in life) is the idea of Good Enough. I have this adorable tendency to want things to be Exactly Right… and to work reeeeally hard to get to Exactly Right and to be reeeeally hard on myself when I don’t hit the mark. It’s a very conscious work in progress – to do some (plenty! enough!) but not all, and then to not give myself crap for it (that’s the kicker; I am a master self-crap giver).

The same is true in this space. Instead of posting a ton but saying very little of consequence, or only posting when I feel I can write a thesis on whatever’s on my mind, maybe, when I get an idea, I can just… write?

Two weeks ago was our district’s Super Sale – a weeklong, secondhand shop-fest that is the largest fundraiser for our schools. Putting it on is a Herculean effort – from set-up to receiving the goods (think the world’s largest garage sale, where all of the items are dropped off) to sorting to pricing to staffing the sale itself to takedown. Whereas I’d volunteered a few shifts in previous years, this time I joined the committee.

I was the Toy Lady. I have never washed my hands more in my life.

Since I knew the sale would consume my waking hours, I asked Nick to be sure he didn’t have to travel. He was able to arrange his schedule to play chauffeur to Ella and Annie, grocery shop, and cook dinner each night – which was awesome. You might think, with the big stuff largely taken care of, I would have been content to breathe a sigh of relief and just concentrate on what I had to do.  Instead, even while running on less than 5 hours of sleep a night and living off of Halloween candy and diet cola, I fought the urge to do more. The dogs could be walked longer. I could squeeze in some vacuuming. The babysitter instructions could be voice-memo’d while driving to piano lessons.

I suck at being Good Enough instead of being Exactly Right.
Maybe, for my 42nd birthday, I’ll hone this skill. ONE CAN DREAM.

After six months, I’m mostly over my concussion; I feel 100% like 90% of the time (does that make sense? The Math and I are on so-so terms). Some things still bug me, though. Light – too bright; reflected through a water bottle; dancing through trees in the afternoon; flashing on an iPad – makes me dizzy. I forget words a lot.

(As an aside: concussions are NO JOKE, y’all. Take them seriously. Wear the helmets. See the doctors. Do the resting. For real.)

But I’m getting there. And I want to get back here, too. I can’t promise I’ll have anything earth shattering to say and I probably won’t win any Pulitzers… but I’m telling myself that’s okay. What I write will be good enough.

Kind of like the cleanliness of my car. I mean, there’s nothing growing in there… but it’s not exactly off-the-lot lovely. If you don’t mind using a lint roller when you get out, you’ll be good. 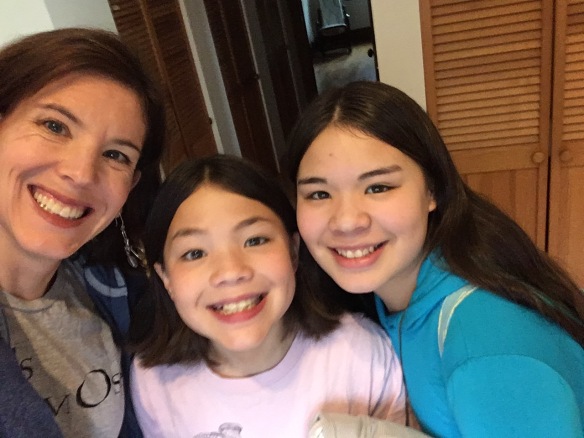