Our Canine Companions for Independence journey began in October of 2009 when we joined the CCI family as we welcomed Diamond, an 8 week-old black Lab puppy.

Given that this was our first foray into the world of service dogs, the learning curve was steep. Once Dizey became housebroken, we began leaving her alone in the kitchen… and then were horrified when she would chew through chair legs. She also learned the art of counter-surfing (including a cake to celebrate a friend’s newborn) – a habit that, according to her forever family, proved impossible to break (our bad!). Being consistent in our training – no jumping on anyone, even if they love dogs; no random climbing on the furniture, no matter how snuggleable the dogs look; no pulling on the leash, despite how much longer walks might take to get it right – was tough. But we learned. And Diamond taught us.

Bringing a pup-in-training with us everywhere we went was also an entirely new experience. We soon discovered the best times to visit the grocery store (lest a pup get its paws run over by the cart), how to fasten a CCI cape/vest in blinding Rochester snow, just how many paper towels and plastic bags to have on hand at any given time, which things might spook a dog (automatic doors, floor grates, and mannequins, I’m looking at you), and that, no matter how many times you’ve offered the pup a chance to hurry, there are no guarantees that a visit will remain accident-free.

These were taken for the girls’ valentines; their cards said, “Puppy Love”

We also learned that there are no “quick stops” when you’ve got a cape-wearing dog with you. This is simultaneously one the most wearisome and most awesome parts of raising a service pup: everyone, and I do mean everyone, wants to tell you their dog story, and especially their dead dog story. A simple trip to grab milk and toilet paper could turn into a 20-minute sojourn when Diamond came along, as we were stopped so people could scratch her head (only with permission, thanks very much), tell us about their black Lab back home, how their best friend’s cousin’s uncle’s boss’s wife once dreamed about getting a black Lab, or about good ol’ Rascal or Butch or Princess who was the light of their life but crossed over the rainbow bridge last week or last month or six years ago. It’s almost compulsory, this desire to share dog stories with us because of the cape-wearing pup at our side.

And, for us, those stories have become almost sacred. Dogs are special. Sharing them is special.

So was Diamond. She came with us to Kiawah and Minnesota, doing a stellar job on the airplane both times. (Our trip to Minnesota did, however, provide us with our favorite dog disaster story of all time: when Diamond left Easter egg-filled diarrhea all over the moving sidewalk at the MSP Airport…) She went with the girls into their classrooms. She joined them in the snow and the water, posed for photos in costume, and never, ever complained.

After returning Diamond in May of 2011, we knew we wanted to raise another service dog pup. By the time Langston arrived in September, we felt more confident and were excited to put what Diamond had taught us into practice.

We’d been told that CCI could release dogs from Advanced Training at any time; only so many are cut out for a life of service. Nevertheless, we were surprised in October, 4.5 months into Advanced Training, to receive a call that Dizey was being released. (Long story short, she was occasionally, but unpredictably, aggressive with other dogs.) 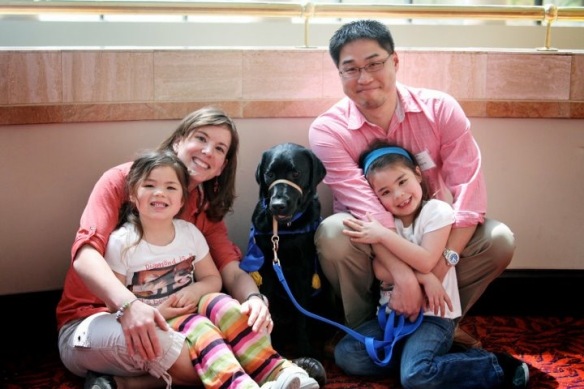 We adored Diamond. We would gladly have taken her back.
But because we adored her, we knew she couldn’t live with us. She deserved a home without other dogs to make her nervous. So we put the word out – and, very happily, Diamond became the forever pet of local friends who loved her dearly (even though she never outgrew counter-surfing). Her nickname was D-Money. She graced their Christmas cards. They brought her on countless adventures. And when she became mysteriously ill, they never gave up on trying to find out what was wrong, to help her, to make her comfortable.

Very sadly, despite their Herculean efforts, Diamond passed away three days ago. She was only eight-and-a-half years old.

It’s a strange feeling, losing someone who held great importance during a particular period of your life. Not quite missing; Diamond hadn’t felt like “our” dog for many, many years; Ella and Annie barely remember her. Not quite heartbreak; we loved her then, and remember her fondly, but it’s been a long time and our hearts have made room for 5 other CCI pups since then. There’s a buffer of respect and deference, too; Diamond was our puppy, but she was her forever family’s beloved pet.

Her passing is nevertheless a somber, poignant milestone, and Diamond will forever occupy a unique and significant place in our hearts. She introduced us to CCI – their specific commands, training methods, and approaches. She also introduced us to the world of service dogs and puppy raising, which has become one of our most central and important missions.

Jitter navigating the LIRR during Advanced Training; photo courtesy of her handler 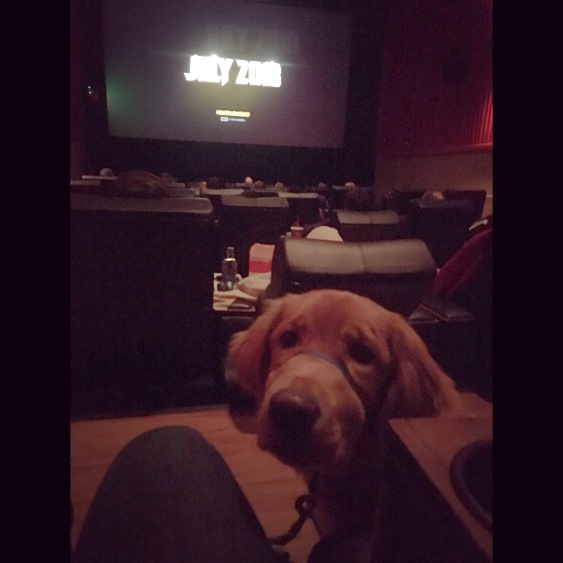 Because of Diamond, we found one of our purposes in life. We cannot possibly express our gratitude to her, not only for being a fantastic puppy, but for introducing us to the world of service dogs. Diamond brought us into the CCI family, and nothing has been the same. Thank God.

Or, in this case, thank dog.

Godspeed, Dizey. You were a great pup, a terrific pet to your forever family, and you can bet that next time Arlington and I are stopped by someone in the grocery store, I’ll be sharing your story with them. 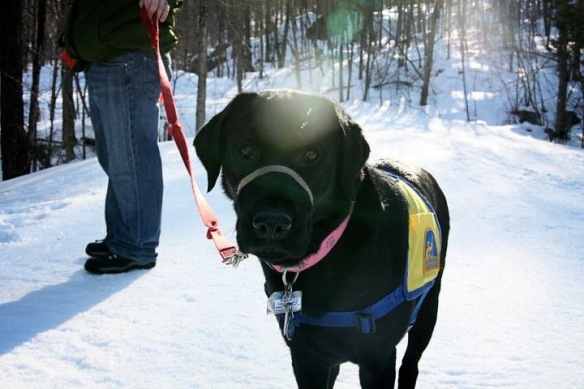