The time between Thanksgiving and New Year’s has never exactly been what I’d call “relaxing.” Not only are a bunch of holidays thrown in there with all of their trappings, but also Ella and Annie’s birthdays (see again: I’m terrible with The Math).

Still, the month of December is, for us, the perfect bookend to the year – because the girls and I so love the traditions that that come with it. Cookie decorating, RACKing, Advent crafts, Santa meet-n-greets, watching movies, driving to see the lights, and the bazillion other things that make up our Christmas season aren’t chores we dread but the framework within which our month is built.

This Santa remembers everything and is absolute magic, I tell you.

Most years, although the weeks go by at a breakneck pace, the mere presence of these traditions ensures order and stability. On Tuesday*, the decoration bins shall come out. By noon on the 8th*, the homemade wrapping paper shall be complete. Sixteen hours before the winter solstice*, we make our holiday donations.
*exaggerations. Mostly.

It’s a little like our own, special holiday “Camelot” – where the rain can never fall till after sundown and the moonlight appears by 9 p.m. – except without the grandiose costumes or singing.

Actually, we wear some crazy things in December and always have music playing, so scratch that.

I’ve liked it that way, having the checkpoints and guideposts to provide much-needed scaffolding in an otherwise chaotic month. This year, with Thanksgiving occurring so early (and, thus, nearly an extra week between it and Christmas), I’d assumed that I would be well on top of things and actually be able to let go, float away, and appreciate our traditions, rather than breathlessly going through the motions.

Instead of providing a jump-start to the fervor, though, those extra days seemed to slow everything down. Why start prepping the Advent calendar when there’s still so much time? Who needs wrapping paper if we’ll ship direct from Amazon? Do we really have to choose the birthday cake theme when there are still 10 days to go? It felt like wading, not floating, but that was okay.

Then, as December unfolded and I barely managed to squeak in the Advent calendars and dust off the Elf on the Shelf, a dear friend suffered a terrible tragedy. While the community rallied together to support her and her children, I left wading behind and began to tread to keep my head above water. I missed deadlines for mailing packages without forking over the mortgage-payment-esque rush shipping fee. Ingredients that I’d planned to procure for holiday treat-making were forgotten. One afternoon, I literally drove right by the location for Ella’s swim practice until I heard her concerned voice from the back of the car, “Uh… Mom? Isn’t practice at the Y?”

By then, I was no longer even treading. Instead, it felt like I was underwater, everything a rushing blur, popping my head up only long enough to take in a breath and get my bearings before dipping back beneath.

I began prioritizing the things with hard deadlines; everything else waited. New games? Saved for later. RACKs for our postal workers? Another time. Gingerbread houses? Christmas cookies? Setting out the Christmas village? Not today.

And I hated it. It wasn’t struggling to get things done that bothered me as much as the disappointment over what was falling by the wayside. It wasn’t necessary to send out holiday cards on time but I wanted to, damn it, and each day they were put off added more stress to what was already overwhelming.

By mid-month, I had to face reality: the scaffolding wasn’t there this time around and it wouldn’t be, period. Barring some kind of true Christmas miracle, there was simply no way I could “catch up” and put the guideposts back in place. Instead, I had to just be where we were, taking every day as it came rather than following a plan. What would happen would happen.

So we put things off. We waited. Our annual holiday movies stayed in their DVD cases. The Christmas village remained boxed. The cookies were baked but not iced. Rush, blur, beneath the surface.

I learned that being underwater has its advantages, though. See, when you’re working so hard just to keep from sinking, there is little time for anything beyond what’s necessary in the moment. This meant relinquishing control and asking for help (*gasp*), which were major ego-busters but turned out to be soul-savers. For the first time in 23 years, I asked Nick to take charge of finishing up shopping for our extended family. I asked for help with cleaning and said screw it about everything else. The girls decided on the design for our cards. 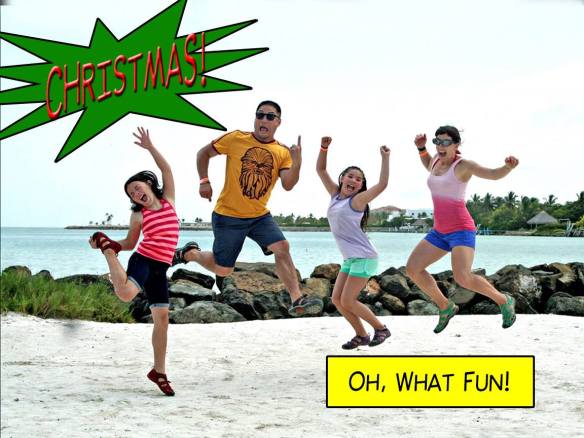 They did turn out pretty cute…

Spending so much time beneath the surface made the moments when I did pop my head up to breathe all the sweeter. Since I was no longer relying on guideposts and was, instead, trying to get my bearings, I really noticed what was happening around me – and when I paused in those moments, it was ridiculously delicious. Somehow, Annie and I made reading our daily holiday books a priority; it became my nightly salvation. When the girls and I finally – less than a week before The Big Day – put up the Christmas village, everything else melted away for that hour.

And so it went – remaining just barely underwater as the holiday crush sped by, reveling in the brief moments when I’d pop my head above the surface long enough to be sure of my surroundings – until three days before Christmas, when the girls’ school break began and my dad and stepmom arrived. Every instant until December 22nd had been spent assuring that What Needed To Be Done Was Done… meaning, amazingly, that – sweet fancy Moses – nothing essential remained. No bills to pay. No presents to buy. No groceries to stockpile. Instead, on December 22nd, I realized there were two entire, empty days between then and Christmas to focus on everything we’d ignored for three weeks: movies, cookies, gingerbread houses, games…

Basically, everything that I’d wanted to be doing all along.

I cleared the surface, stopped treading, and let go of the overwrought water metaphor I’d been indulging all month. Let the traditions begin! We made tray after tray of cookies. We played enough games to buy stock in Milton Bradley. We watched all of our favorite movies and went to see new ones in the theater. When the girls didn’t complete their gingerbread houses right away, I finished them myself on New Year’s Eve – because I love me some gingerbread houses, by gosh.

Sequence was our new favorite game this year; highly recommend.

This relaxing revelry did not occur only on December 23rd and 24th, but for the remainder of 2018 and a good ten days into January, as absurdly cold weather caused school closures and we were blanked with snow. We wore pajamas. We ignored bedtimes. Heck, even now, as February dawns, there is still a stack of games six deep on the living room ottoman.

Basically, Christmas lasted for a month and I loved every minute of it.

I guess the point I’m trying to make is now that I know that Nick is pretty swell at selecting gifts for our siblings and that watching Home Alone on Christmas day is actually more fun than fitting it in beforehand, I will work at enlisting help and ditching the timetable a bit. LET THIS BE A LESSON TO US ALL. Maybe the structure isn’t so important as just doing what’s important.

But the holiday cards still need to be ordered earlier. Some things just need to happen on schedule, y’all.