Long before October rolled around, Ella knew what she wanted to be for Halloween: Eliza Hamilton (from, um, Hamilton the musical). After scouring the internet for the perfect dress, she fell for a beautiful replica in an Etsy shop.

It was expertly made, exactly like the one worn in the musical – and, therefore, cost more than double what we would normally spend on Halloween costumes. Seeing how an 18th century gown isn’t exactly something one wears to school or while running errands, we told Ella that spending so much on a costume to be worn once was simply out of the question. 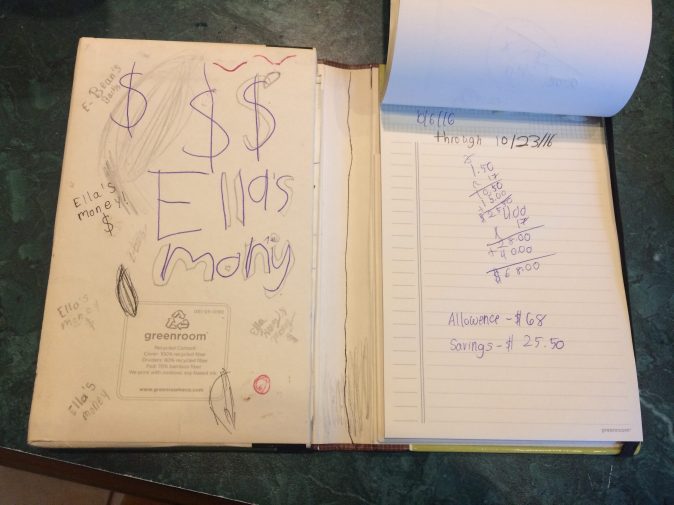 Ella inquired how much we’d be willing to spend on a costume. Then she inquired as to whether, if she chipped in more from her allowance, she could get the dress. We agreed. As soon we placed the order, Ella forked over the cash and waited eagerly for the package’s arrival. When it finally came, she was in heaven – and more than a little pleased with herself for deciding it was worth the money.

This, really, was the point of her allowance: to give her the opportunity to learn how money works, and more specifically, how it works for her. What does she want to procure? Does she want it enough to spend her own money on it? What is a fair price? Is she willing to wait for a bargain or does she want something immediately, so she’ll willingly pay more? When is something worth saving for? Does it feel better to blow through money to buy things that make her happy or to let her stash accumulate?

Every family handles money differently. Some folks give kids an allowance on a case by case basis when it’s earned for chores (or something similar). Others give a set allowance that is contingent on children doing certain tasks. Others base it on grades.

When the girls were little, Nick and I decided we wanted their allowance to mean something else. We wanted Annie and Ella to learn the value of a dollar, to learn how to spend and save money, and to have an understanding of how economics work. We both know kids who, upon graduating college, hadn’t ever had a chance to figure out how to save or spend money, and the results weren’t pretty; we didn’t want that for our girls.

An allowance was also a way of giving the girls a little autonomy. I remember how frustrating it felt being completely dependent on my parents for absolutely every purchase, from a pack of gum to the latest fashion trend (Benetton shirt, anyone?). Nick and I wanted to give the girls the ability to purchase things they wanted, when they wanted to, without relying on us.

I hadn’t expected that ability to garner so much ownership and pride.

Sometimes, of course, we say “no” even if they spend their own money; there are just things we don’t allow. But more often than not, if the girls want it and can afford it, it’s theirs, whether it’s a tin of Pokemon cards or sugar-laden gum or an Eliza Hamilton dress.

This is not, in any way, to say that Annie and Ella are not expected to do chores; they are. But Nick and I decided ages ago that we didn’t want to tie together chores and money. For one thing, we didn’t want to make it an option to just skip chores if the girls decided they didn’t feel like earning their allowance that week.

Even more importantly, we wanted to instill in them the idea that being part of a family means helping one another out, pitching in, and making things work together. That means everyone is expected to do their age-appropriate share; it’s simply what we do as a family, period, and no one gets paid for it.

If you’ve been reading here for any length of time, you know I love me a good chart or whiteboard, and we’ve used a lot of different chore-type charts over the years. This seems to be the earliest… 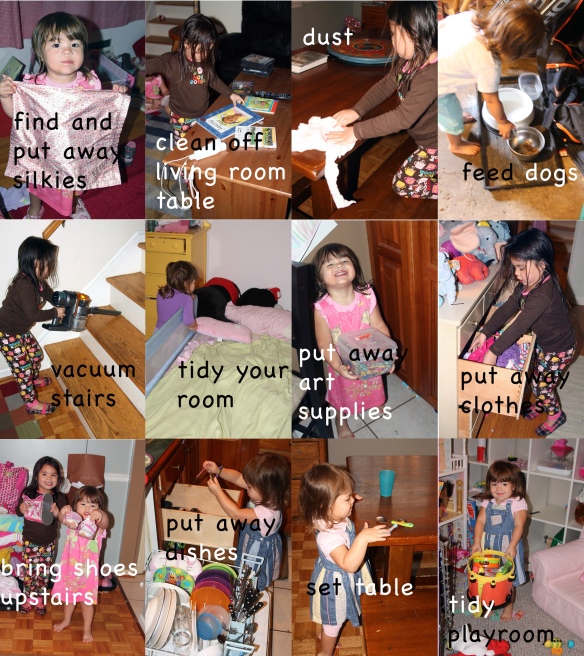 A couple years later, a chart and red stamp were used. Teeth brushed? Stamp. Bedcovers pulled up? Stamp. Trashcan carried to the hall the eve of trash day? Stamp. Within a couple of months, the girls were incorporating the tasks into their daily routine and no official chart was needed, so it and the stamp were retired.

(To be fair, Ella also got ahold of the stamp one day during rest time and stamped her wall and stuffed animals and bedsheets and clothes and I was so upset about the sea of red I encountered when I went into her room that I had made her shower fully clothed to prove the point that everything was so ink-stained, the only solution was to soak it. Not over-the-top at all. Good parenting times.)

Sometimes, the charts were very specific, with points to be awarded for checking items off the list and “prizes” to be redeemed after accumulating enough points. 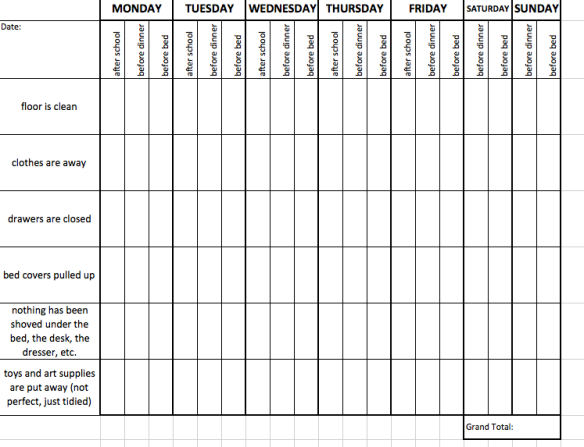 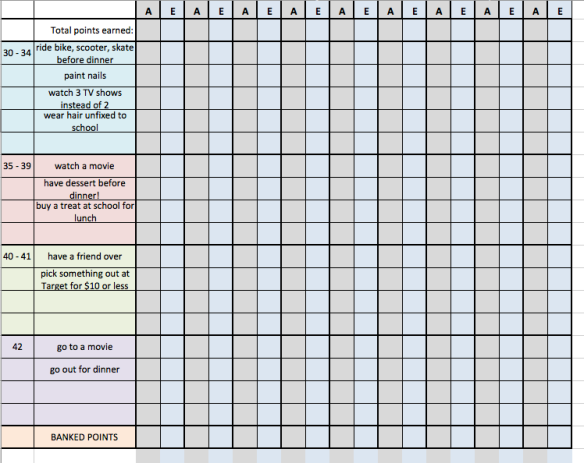 More recently, we’ve employed a system  where they earn points for being kind, helpful, etc. (putting away groceries without being asked, feeding the dogs without complaint, offering a favorite chocolate to a sister…) and can then “spend” those points on things that hold meaning for them. It’s far from perfect, but it does a good job of encouraging them to not act like schmucks. 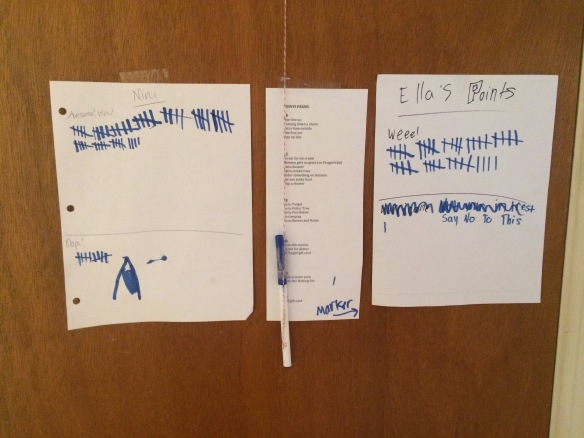 As for their “regular” chores, like doing their laundry, clearing their dishes, making their lunches, and the like? They still have to do those – but there’s no tangible reward, unless Not Making Mom Irritable counts. It’s just part of being a family. There are no salary negotiations on these matters nor can anyone decide to skip the labor and forego a paycheck.

Their allowance is still doled out every week, regardless of how cheerfully they followed through on tidying the bathroom or how many points they earned. Because the point of the allowance is to teach fiscal responsibility and give them some autonomy, not to offer them an incentive to pitch in.

I’ve heard it said before that the reason allowances and chores are tied together is to give kids a realistic sense of how life functions. People get paid to do their jobs; if they work, they earn money and if they don’t work, there’s no money. I absolutely appreciate that for adults; money doesn’t just fall from the sky. Neither does it for my kids.

But see, that’s the beauty of the auto-allowance: it takes me, the Mommy ATM, out of the equation. If Annie and Ella desperately want Target dollar section Halloween socks, the money for that will not rain down upon them from mama’s purse so they can wear pumpkins on their toes. Even “just a dollar” adds up, both monetarily and otherwise. No; they’ve received their allowance. If they choose to spend it on jack-o-lantern fuzzier, so be it, but I’m not involved.

We do think it’s important to (try to) instill in them a healthy work ethic, to make them aware of the connection between doing a job and getting paid for it. Hence, the girls frequently have the opportunity to earn additional money to pad their allowance – by helping out with things around the house that are usually outside of their responsibility. Mowing the lawn, weeding, mopping, etc. are all “extras” that are rewarded monetarily. When they’ve got their hearts set on particular items they can’t afford, the Jobs For Hire are completed daily. Other times, the jobs go undone for weeks and the money just lingers, but that’s okay because these were just bonuses; the mandatory family chores have already been completed (for free). 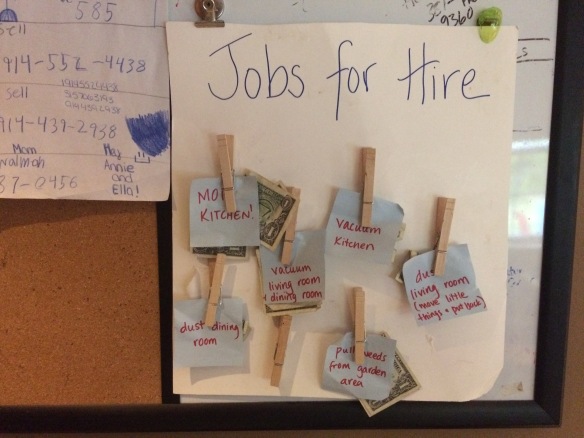 I have no illusion that this is a foolproof system, but it does seem to be accomplishing what we’d hoped – which is to say, Annie and Ella have a pretty decent understanding of how money works, what’s important to them monetarily, and how/when to save vs. how/when to spend. Considering I barely learned these until I was a young adult, I think we’re off to a reasonable start.

I think the chore thing is doing what we hoped, too: creating a sense of ownership and pride in our family, and helping foster the idea that we’re in this together. Because the girls have been learning basic household tasks for so long, they’re also fairly competent and capable at most of them, so fingers crossed that when they, like, head to college, we won’t have any last-minute Oh My Gosh You’ve Never Done A Load Of Laundry panicking. Or not as much, anyway…

Last night was the school book fair. I happily bought the girls a couple of novels, but when it came to the trinkets near the checkout, I drew the line. Receiving that news, Annie calmly opened her purse and handed over the cash – her own cash. She walked out feeling mighty fine that she’d been able to get exactly what she wanted… and I walked out feeling mighty fine that I hadn’t shelled out for a periodic table bookmark.