Last week, we took our first (of what is supposed to be five) family golf lessons. I realize that, to many folks, this will likely sound like a specially designed form of torture (believe me, I realize this), but after listening to Nick talk it up for several weeks, I decided that maybe it could be – at the very least – tolerable.

My father and stepmother are both avid golfers (seeing Grand Meg’s name on the big ol’ plaque as the club champion many years running has given Ella and Annie a huge kick – which is good, because my name is surely not appearing on any golf trophies soon), and Nick’s dad has been known to swing a mighty fine set of clubs, so you might say we come by the game naturally. In reality, while Nick really likes golfing, he only hits the links a handful of times each year (and, as such, could use a few pointers), and I have only golfed a full round once in my life (that is, if you count hitting the ball 20 yards, becoming annoyed with the lie, picking the ball up and walking it closer to the hole, accidentally chipping onto the green, declaring it a “gimme” and pocketing the ball, hole after hole, as a full round of golf).

Still, Nick found a course close to home with a highly-recommended pro who agreed to teach all four of us at a very reasonable price. Rather than purchase full kiddie sets of clubs that the girls might never use again, he wisely borrowed two sets from a friend (I believe he called them “adorable,” a term generally reserved for wide-eyed baby animals, dancing children on Ellen, and, occasionally, my stepmother-in-law). Given that the only golfing the girls have done previously is of the miniature variety (and even then, they’d become bored after about the 11th hole and proceed to try to stop the windmills from spinning or use their putters as swords), I was skeptical that they’d be interested in learning the ins and outs of “real” golf. Yet again proving my that my parental instinct isn’t worth diddly, Annie and Ella were ecstatic at the prospect of lessons – and, although I couldn’t quite ascertain why, I figured — inexpensive lessons; free clubs; nice instructor… What could go wrong?

Pre-lesson and looking spiffy. What, you don’t golf in a tutu skirt?

As luck/Mother Nature would have it, our first lesson fell on the hottest day in the history of the earth. Okay, technically we didn’t set any records in western New York, but it was hot. Ungodly hot. Melt-your-face-off, “No, kids, it’s too hot to play outside today”, get-sweaty-by-just-thinking-of-being-outdoors, how is it even possible for people to survive without central air? hot. Plus, there’s the whole humidity thing, where the air feels thick, almost tangible, like you’re wearing a damp, full-body invisible sweater. While standing on the equator.

In other words: the perfect day for spending an hour in the middle of an open field facing directly into the sun that was shining its menacing little sunbeams straight at you.

As the girls helped gather up their gear, I began to understand why they’d been so ecstatic about these lessons: accessories. Shiny, bright white golf balls. Bags of cute, day-glo tees. And, best of all, brand new golf gloves. If I’d known this family adventure would bring about shopping, I would have agreed to it a long time ago.

After a little coaxing (and some instruction on how to carry awkward bags that are nearly as large as they are), they even agreed to carry their own clubs to the driving range.

Within only a few steps, however, it became clear that the heat was getting to them. Nick tried to snap a shot of the girls jauntily carrying their bags to the course, but instead got this gem, wherein they look like maybe they’re marching to their own deaths:

At that exact moment, when it became clear that even one more step might result in heat exhaustion, the golf pro turned up and offered them a ride to the driving range on the cart with him. The girls accepted with the same enthusiasm they’d shown when we first took them on Splash Mountain in Disney World, and I then understood the second reason they’d been ecstatic for the lessons: riding in tiny motorized vehicles is badass, hella fun. Point one for our instructor.

Once we arrived at the range and the girls responded with rabid enthusiasm when he asked us if we’d like to hit a few balls, the biggest reason for their ecstasy became clear: they were being permitted to smack a ball with a stick. Deliberately. As far and as hard as they could. Being totally aggressive and using this metal object to whack one of our shiny, bright white balls out onto that expanse of green (while wearing a brand spanking new golf glove), and we don’t even need to pick them up when we’re done?? SIGN. ME. UP.

It was pretty much uphill from there, as the pro walked Nick and me through the basics of our swings and showed us tiny corrections we could make to our posture, hand grip, etc. He stated things clearly and was extremely friendly, although I admit that I didn’t exactly hear all of what he was saying because I was too busy feeling like a cast-member from A Time To Kill, a movie where not even the gorgeous Ashley Judd and delicious Matthew McConaughey can distract me from the fact that they are sweating out the equivalent of their body weight in every scene. When the sun disappeared behind tiny puffs of cloud, or when the warm wind kicked up, it was surprisingly tolerable, but when the air was completely still and the sun beat down incessantly upon us, I found myself sweating so profusely and being so aware of the perspiration cascading down my torso, I wondered aloud if I might actually die before the lesson ended. So I might not have used my best listening ears.

The girls, however, were having a dandy time, swinging away with all their power, shouting at us to watch them every single time they set up next to the ball (“Watch me, Mommy!” “Look at this, Daddy!” “No, watch me again!” “Watch me this time, Mommy!” “Daddy, make sure you keep looking!”), hanging from the golf cart roof, camping out in the shade of the trees behind us, positively chugging the ice water that the pro had kindly provided for us (point two!), and wiping their brows with an ice-water-drenched towel. About halfway through the lesson, as I walked over to get a sip of water and revive myself, Annie whispered to me, “This is awesome already!”

Nick, who did not seem to be suffering from the heat as strongly as I, followed the pro’s instructions and almost immediately began hitting better shots. Despite sweating so much I could hardly open my eyes, I did actually manage to internalize some of the tips the instructor was giving me, and was pleasantly surprised that my own swing was improving; perhaps this would, in fact, be just as awesome as Annie had declared (three points!).

Then, as she stepped up to hit another ball, she motioned me over, obviously distressed. I had opened my mouth to ask her to please stop whining when she held up her un-gloved hand and showed me one of the gnarliest blisters I’ve seen in a long time. 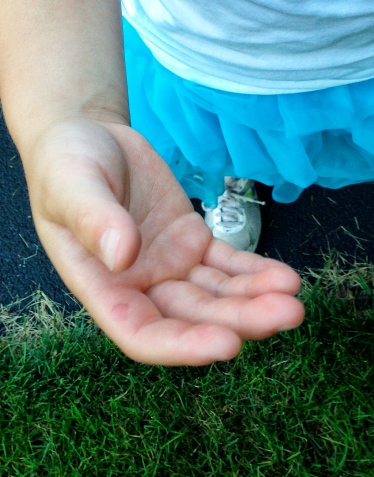 Thankfully, it doesn’t look so bad here, but trust me, it was icky.

Naturally, being a stellar, always-prepared parent, I had no band-aids on me, nor anything else to cover her open wound. Hence, she couldn’t swing the club again (the pro had warned her that doing so would seriously irritate her already-very-sore finger), and that, combined with the stinging pain, sent her into a crying tailspin. “But I was just having fun and now I have to stop!”

Ella, meanwhile, had been cheerfully dousing herself with ice water – pouring it down her back (“Check it out – my shirt is ALL WET!”), dumping it on her head, and dragging the freezing water towel across her forehead. Because it was so absurdly hot — and, in what is, again, a stellar parenting move — Nick and I somehow didn’t put two and two together to realize that covering oneself in ice water + no antihistamine medication = hives, when your child is allergic to the cold. At first, I just thought that Ella’s rosy cheeks were due to the heat, but when she began to complain that she was itchy everywhere, it finally dawned on me that she was having a full-on allergic reaction.

Weird allergies are a blast.

We limped back to our car (actually, our super pro took pity on us, so we all — all five of us — piled onto the single-seat golf cart, like some sort of golfing clown car; point one million!), one child wailing about her mangled finger, one scratching furiously and moaning that every single part of her was itchy, and we adults — who had shied away from dousing ourselves with water — looking as though we’d walked through a car wash.

In spite of the heat, the blister, and the hives, however, we all agreed that – somehow – it had been really fun. If I were to play another round of golf this week, I’m confident that I’d still pick up my ball and walk it down the fairway, but, to my surprise, I enjoyed myself greatly and am very much looking forward to the other four lessons.

Next time, we’ll make sure Ella is properly medicated. And Annie already has a golf glove for her right hand. I’ll bring band-aids and towels, so the sweat won’t be in my eyes. We’ll be prepared, by gosh.

And then, what could possibly go wrong?