We spent last week at the lake with some of my extended family – a dozen of us in all – a “stolen” week, as Nick called it, because the weather was supposed to be horrendously thunderstorm-y every single day, but somehow, only one day was too rainy to be on the dock. When we’re down for just an afternoon or a weekend, I (try to) keep the girls and myself eating relatively normally — fruits and veggies, snacks devoid of too many unpronounceable ingredients, dessert food reserved for dessert. But when we dig in for a longer stay and my relatives are in town, I officially give up and accept that my aunt will give them chocolate chip cookies and Diet Coke for breakfast, my mother will sneak them candies and sips of iced tea throughout the day, and my cousins will invite them to help finish off entire family-sized bags of potato chips in one sitting. It’s still totally “everything in moderation” with 51 weeks mostly on and one week ridiculously off, right?

I prefer to save myself for Doritos. There is a reason that I don’t keep them in my house, and it is because they are filled with crack and made by the devil. I believe I ate my weight’s worth in Doritos last week, although I did manage to save room for several Magnum bars. And Fourth of July cake (for breakfast). And about half a cup of Helluva Good french onion dip. Daily.

During these weeks together, everyone is in vacation mode, where calories don’t matter and bacon is a food group, and it becomes a snack free-for-all, a mob mentality frenzy to see just how many Pringles or donut holes or Cheez Doodles we can load into the pantry. It is also every person for him or herself, because with twelve people sharing a kitchen, that organic lemonade you purchased just for you, or the leftover chicken salad you were planning to eat for lunch, magically disappears the moment someone else decides it looks tasty. Unless you put your name on it (which I have done, quite literally), it’s fair game.

I do sometimes try to show a little restraint, to ascertain the item’s intended-for consumer, if only because I’m hoping karma will smile kindly on me the next time and save me the one remaining perfectly ripe peach I’ve been eyeing. Hence, when I opened the refrigerator last weekend and discovered a beautiful little blue chocolate box containing just one of its four original specialty chocolates — a bon bon in the exact same shade of robin’s egg blue as the box — I simply closed the door and walked away. Surely, by leaving only one chocolate in the box, someone was saving it for themselves… Also, I could eat the Magnum bars in the meantime. Moderation, people.

When the little blue chocolate was still sitting there the next afternoon, however, all bets were off. I took the candy out of the box and examined it, saying aloud to my cousin, “I wonder what’s in this?” (because a blue-coated chocolate doesn’t exactly scream out caramel [yay!] or cherry [omg, no] or nougat [maybe]). A sniff didn’t provide me with any clues — it just smelled, you know, like chocolate — so I broke it in half and was delighted to discover that it was a perfect combination of milk chocolate and mint. I’d love to say that I savored each morsel, but really, I scarfed that puppy down in a single, satisfied bite, threw away the little blue box, and went on with my day.

It was only much later, after the kids had gone to bed, that my grandmother began to ask about the chocolate. “I just can’t imagine where it’s gone! I gave the rest away when the ladies came for bridge last week but I was saving that one for myself.” When asked why this particular piece of chocolate was so important, she replied that it was a Godiva chocolate, and never in her life had she had a piece of Godiva chocolate (ninety-three years is a long time to wait for Godiva, y’all), and she just wanted to know what it tasted like — but more importantly, she simply wanted to know who ate it.

At first, I didn’t answer because she hadn’t actually asked me the question (I was in another part of the house and was informed by a cousin that my grandma was making inquiries), so it totally wasn’t lying because I wasn’t saying anything at all. An hour later, while we all played cards and my grandmother again bemoaned the mysterious missing chocolate, I feigned ignorance because, quite frankly, I wasn’t so eager to confess being the culprit – and really, I was doing her a loving favor because ignorance is bliss, no? Several hands later,  however, I could avoid her inquiries no longer, and admitted that yes, I had taken and eaten the candy. The little blue chocolate. The specialty Godiva chocolate, the one she had been saving. I had taken away the one opportunity she’d had in her entire life to eat a piece of Godiva. I also might have admitted to clubbing baby seals, allowing hair feathers to become popular a couple of years back, and not properly recycling my batteries, but I don’t think she heard me.

Because they’d become a bit giggly during The Great Chocolate Interrogation, slipping me sideways glances and trying not to laugh as I sat, silent, pretending not to hear my grandmother asking plaintively why someone would deny her this one pleasure in life (she didn’t actually say this, but, c’mon, her one shot at Godiva chocolate!), and also because they’re just awesome like that, my aunts and my mom were not about to let me take the fall — at least, not alone. The moment I ‘fessed up, all three of them piped in, “Actually, Mom… I ate the chocolate.” “No, I ate it.” “Really, Mom, it was me!“, which successfully muddied the situation and offered me a small reprieve. (Are they not wickedly fabulous?!) My cousin, however, was more than happy to chime, “But Emily! I saw you eat it!”
Way to be a team player, dude.

In all of the laughing and confusion (and maybe because she was starving, having not eaten the chocolate), I truly don’t think my grandma knew that it was I who’d been the thief. Nevertheless, I vowed to rectify the situation, adding “Godiva chocolates” to the family shopping list that had been lying on the kitchen counter. 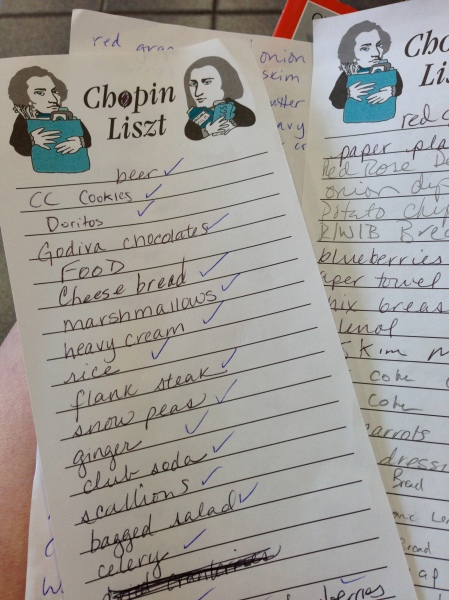 “FOOD” pretty much sums it up.
Doritos. Word.

As it turned out, I had an errand to run, and so I was the designated shopper, a task that is usually reserved for at least two people because the amount of food necessary to feed all of us for a week requires more than one cart (the chocolate chip cookies alone can fill an entire bag. I’m so not kidding). When just one person is doing the shopping, however, you’re forced to stuff the cart to the brim, utilizing every single square inch of available space — and some unavailable space — like some sort of grocery store sherpa.

Because my grandma’s box of chocolates had been a “fancy” collection, I wasn’t able to find its duplicate at the grocery store, and so instead I bought her a bag – an entire bag! – of multi-flavored Godiva truffles. White! Milk! Dark! With so many amazing choices, surely she’d never even miss the little blue mint one that I’d stolen from her.

Upon arriving home, my grandma was presented with the glorious, new, gleaming bag of truffles. She looked at them, seeming puzzled, and I assumed that she was simply taking time to revel in this incredible moment. At last, Godiva for me! Then she looked up at me and said, “What are these for?”

I told her that I was giving them to her. Just for her. Because I’d eaten hers, the one special chocolate. And I was trying to make up for it with this enormous bag of delicious chocolates. Paying it forward. Improving my karma.

She paused, chuckled, and then handed the bag back to me and said, “Oh, Emily! If I’d really wanted that chocolate, I’d have eaten it already! Besides, don’t you think that Godiva is awfully rich for someone with diabetes?”

If anyone would like some Godiva truffles, they’re in the fridge at the lake. An entire bag. Truffles. Delicious. Be sure to put your name on them, though – just use a sticky note; we’ve got plenty – unless you don’t mind sharing.

But save at least two for me, please. I think I’ve used up all my karma for a while.