There are as many varieties of anxiety and depression as there are people struggling with them. For some folks, the weather is a particularly powerful trigger – and for those of us who live in climates that are endlessly gray and snowy during the winter months, this can be doubly so. (Seasonal affective disorder is very real, yo.)

While there are a gazillion things that bring my anxiety and depression to the fore (I mean, with anxiety, it’s every single thing, amiright?!), the weather has – mercifully – never really been among them. That’s not to say that I haven’t been bummed when it’s snowed for 49 straight weeks or we haven’t seen sun since the Bush years, but overall, I like winter. I love Rochester. And spring has never not arrived, so I tend to not fret too much about the weather.

This year, though? I have had enough. I don’t mean that I’m ready to move on from winter… I mean that I am done. DONE. SO EFFING DONE AND UP TO HERE with the cold and the snow and the gray and the ice storms and the utter lack of anything even remotely springlike. If I see one more snowflake, I swear that I will wrestle winter to the ground with my bare hands.

There are the stats, of course: More than 121″ of snow this season (that’s more than 20% above normal). It snowed on 15 out of the first 19 days in April – nothing major, but when nearly every single gosh-darn day is gray and snowy and absolutely freezing (we’re on track for the coldest April since 1874), when it is supposed to be spring, Sweet Baby Jesus why, it’s really, really difficult.

And that’s for people who haven’t tried every antidepressant on the shelf.

Screenshot of a Facebook Live graphic shared by our local weatherman.

My grandma used to say that it always snows on the daffodils – and that’s been true. So I try not to get my hopes too high that winter is officially caput the moment the crocuses pop through… but I also am reminded that this happens every single damned year, and the daffodils still thrive and the snow melts and spring emerges triumphant, so I don’t need to consider selling the house when there are flurries on Mother’s Day.

The difference this “spring” is that there are no daffodils yet to snow on. MY ENTIRE NEIGHBORHOOD IS DEVOID OF DAFFODIL BLOOMS. It’s one thing for winter to breathe a last gasp after spring’s arrival, like a grumpy old man reminding the whippersnappers that he was really something in his day; people are sympathetic and pat winter on the head, but it’s spring’s time now, thanks.

But when winter never left – when spring is a full month behind and has not showed up at all – there are no sympathy head-pats. There is rage and despair and threats and day drinking and an uptick in Google searches for “affordable places to move.” My therapist told me her schedule is unusually full because she’s had to take on several new clients; literally everyone who comes into her office mentions the weather and how defeating it is. This makes me feel less alone but not less rage-y.

We were in D.C. over April break. It was not springy there, either.

I’ve always said that, although I love Rochester, I could live in any number of places so long as there were four distinct seasons of reasonable length. A few months ago, I was chatting with another volunteer on the playground who’d recently relocated from California back to western New York – a move that usually elicits sympathy head-pats. For her part, though, she was thrilled: they are closer to family. Housing is crazy affordable. Schools are excellent. And she was just so sick of Los Angeles weather.

She explained: yeah, it’s great to be warm and sunny, like, 364 days a year. It really is. But she had lost all sense of an inner time clock because there was virtually no difference between the seasons. Seeing me wonder what the heck she was talking about, she asked: What did I like about the seasons? Why were they so important to me?

How much time did she have?

I love the smells – spring rain is so fresh; fall leaves are earthy and cozy; winter smoke is warm and inviting; humid summer breezes carry with them such joy and contentment. There’s such excitement as the new season approaches; after a sweaty August, we’re ready to bundle up… but equally thrilled to ditch our parkas as the days lengthen in April. 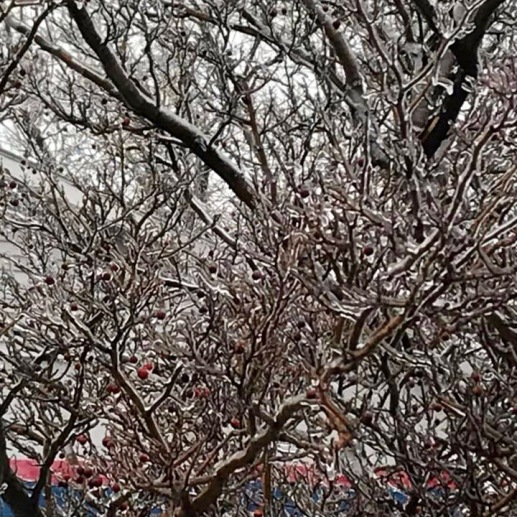 Ice storm trees… from April. When it’s supposed to be, you know, spring.

She nodded with understanding and then added a twist: the changes that accompany each season mentally help us set our calendars. In fall, we anticipate that Thanksgiving is coming when we feel the leaves crunching beneath our shoes. We know it’s almost time for the New Year when we have to shovel with regularity. As we switch out our sweaters for tank tops, we realize that Memorial Day will be here soon. We measure mid-summer by how often we need to mow the lawn and weed the garden.

In Rochester, our activities are season-dependent. We swim in the summer and eat dinner outside. In autumn, we pick apples and get out the long sleeves. Winter is the time for sledding and cozying up with a book by the fire. Spring means opening the windows and firing up the grill.

Without distinct seasons, the months just blend into one another. Whereas we western New Yorkers mark summer with frequent ice cream runs – because summer is ice cream season, by gosh – in Los Angeles, every single day is appropriate for ice cream. Which, she said, is cool at first… but eventually, nothing is special. Without seasons and their accompanying activities, time passed in a strange way, devoid of the usual markers; she felt lost.

So it’s been this “spring.” Our usual markers are gone. There are no budding leaves, no lawns to mow, no *$(#! daffodils. Although it’s stayed light later, there’s no eating outside because it’s too damned cold. The birds have returned and make a ruckus in the morning, but when you open the blinds and see it’s snowing – again – there’s a total disconnect. Which is followed by wailing and gnashing of teeth and general desperation.

THIS IS NOT HOW IT’S SUPPOSED TO BE.

Arlington was none too thrilled with this snow squall a couple of weeks ago.

We are ready for spring, for everything that comes along with it – and, in its absence, there is disorientation. For those of us prone to depression, this utter lack of normal, of forward motion, of hope that things will be different has been hard. Like, worse-than-usual hard.

Virtually the only thing that’s kept me from completely losing it is that, logically, I know spring will come. I mean, SPRING HAS TO COME does it not? It simply cannot remain winter forever. Some day – really damned soon, for the love of all things holy – it will be warmer. The snow will stop. We will see the sun again. .

Y’all, Mother Nature is a woman and I believe in her. Women are badass. Women persist. I BELIEVE IN MOTHER NATURE.

To everyone for whom this unending bear of a winter has been just awful: you are not alone. You are not the only ones refusing to bring your coat because it is SPRING, by God, and you’re sick of the coat that’s been on since Columbus Day, and you don’t care if you develop hypothermia walking to the car. I understand that you may still feel ragingly despondent, but at least we can be ragingly despondent together. And when spring does finally arrive,  we will celebrate as though we’ve won the freaking lottery.

The first person who complains that it’s too warm, however, will be wrestled to the ground with my bare hands. 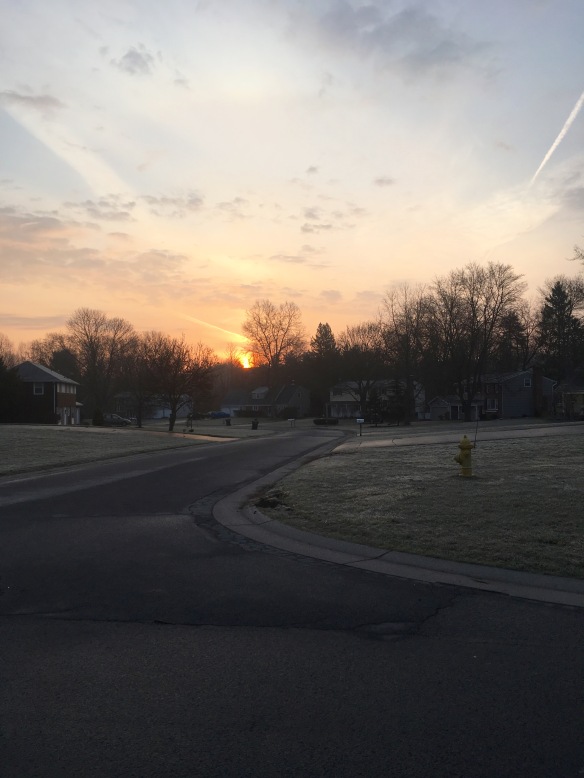 Frosty… but sunny. It’s a start.