When I was about 13, the world came shattering down around me: literally.

I was my best friend, Kiki‘s, party. Whereas my middle school parties had been all-girl gatherings where we did things like wear pajamas and eat brunch or attend musicals at the local dinner theater (Guys and Dolls, holla!), Kiki’s parties involved things like hanging out and talking.

I played my first game of Spin The Bottle at Kiki’s and was so mortified when the bottle “chose” me, I ran and hid in a closet.

Not only was I a bit out of my league at these affairs, Kiki and I also attended different schools, meaning I knew few of the parties’ guests (likewise when she attended my dinner theater fiestas), so I felt even more awkward. Thankfully, I did know Kiki’s family. Our families had lived in the same Upper East Side apartment complex when we were babies, moving to the Connecticut suburbs two years later. We were constants at holidays and birthdays and went on vacations together. John and Linda were the first adults I was allowed to address by their first names, something I found immensely fantastic. 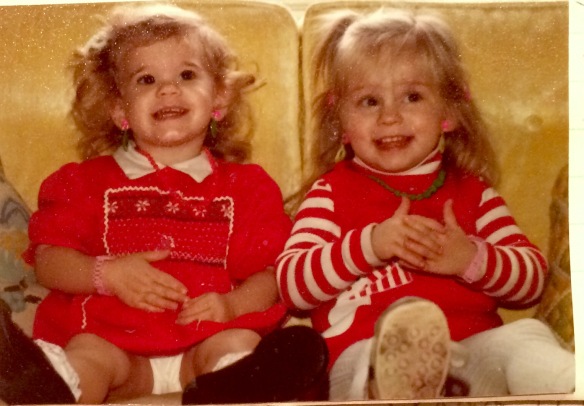 Whenever I came over, there was no formality, no stiffness; just a familial enfolding, as I joined Kiki and her younger sisters on their adventures. John and Linda were very different from my own parents, often permitting us to get away with things that my folks didn’t (staying up late at sleepovers, drinking soda around the pool, not brushing my hair when I woke up in the morning… CRAZY STUFF, y’all). But that wasn’t why I liked them.

They took me in and allowed me to be part of their craziness and loved me for who I was. They were family, plain and simple.

I don’t remember much about this particular party except that, in my attempt to feel less awkward around the boys, I decided to play a game of keep-away (obviously). One boy attempted to have a conversation with me, which was waaaay outside my comfort zone, and rather than engage in discussion, I ran. And he followed. So I kept running.

We continued these shenanigans throughout the house like a one-sided game of tag. Ultimately, I wound up in the bathroom shower (?!), closing the door behind me. Because the shower walls were glass, I was hardly cleverly hidden, so the game was still afoot as the boy tried to follow me into the shower.

With my back against the tiles, I lifted my feet off the ground and propped them against the door to keep it closed, laughing and shouting and making general mayhem.

As the boy continued to shove from the outside, I pressed my feet as hard as I could – wedged perfectly between the door and the wall – to forestall his entrance. We remained like that, pushing mightily, for maybe five seconds… when, all at once, the glass just disappeared, sending me to the shower floor.

You know how in the movies when glass breaks, there’s a cracking before everything implodes? Yeah, not so much here. There was no warning; the entire door, under the stress and pressure, shattered instantaneously, crashing to the ground in a million tiny pieces.

THE ENTIRE DOOR.
We shattered THE. ENTIRE. DOOR.

Neither the boy nor I was hurt in the destruction, but the room was (to say the least) an absolute disaster. I was paralyzed. What the hell do you do when you’re at your best friend’s party and you’ve just played tag through her living room and shut yourself in the shower (of all places) and then put your feet on said shower’s door and DESTROYED THE DOOR?? WHAT DO YOU DO?

I remember feeling tiny and shattered, myself, as the horror – the embarrassment, the astonishment – became so overpowering, I could barely breathe. Sobbing, unable to move (from shame, not pain), I sat frozen, hoping to disappear or hide the evidence… but a crashing glass door isn’t exactly quiet, so the boy and I were soon surrounded by curious party-goers… who, in turn, went to get John and Linda.

They never yelled. They never said horrible things. They didn’t cry or lash out in frustration. In some ways, this made things even harder; maybe if they’d just let loose, I could release some of my awfulness. THESE FEELINGS ARE REALLY HARD. PLEASE LET ME UNLOAD THEM. But no. There was none of that.

I apologized – profusely. I believe the party continued. I know, when I was picked up, John and Linda talked to my parents. I know, when we left, the shower was still broken, essentially unusable. And I know, the next time I was invited over – which was soon – there was no mention of my error, save for maybe joking about using the upstairs shower if I really needed to get clean. It was kind of incredible. 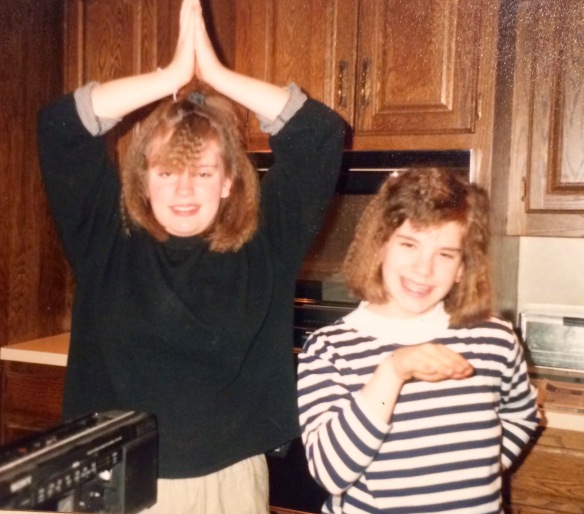 Walking like crimped Egyptians, right around the time of the Shower Incident.
(OMG I just noticed the boom box…)

Yesterday, Ella and Annie had their own Shower Incident. They were playing with friends, pairs of siblings who are over often, roughhousing and getting loud upstairs (as they do). The volume and antics escalated and I’d just said to Nick, “At what point do we tell them it’s too much?” when there was this earsplitting CRASH that shook the dining room ceiling.

Turns out, they’d been taunting one another from either side of a bedroom door when, to keep one faction out, the other had pressed against a wooden hutch, sending the upper piece – and its contents – thudding to the floor. When I arrived, the kiddos stood in shock, surveying the splintered wooden top of the shelf, the skewed books, the fractured picture frames, the demolished clay creations from summer pottery camp.

As I observed the damage myself, getting ready to lose my shiz, this odd (and completely foreign) calm washed over me.

“How did this happen?”
They explained.

“Okay. Since there’s broken glass on the floor, please get your shoes so you don’t cut yourselves. Then, I’m going to ask you guys {the friends} to head out for a bit so the girls can clean up. Afterward, maybe they can play some more.”

Everyone apologized. I thanked them and said it would be okay. As the kids were donning their shoes, one of them turned to me, saying, “I was sure you were gonna yell!”

“Nope!” I think I surprised us both.

My girls were horror-struck, devastated by the loss of their treasured possessions and the dents in the hardwood floor (shelving units are heavy, yo), but also by the terrible understanding that they had caused the loss. It was then, as I saw them accept their role in the accident, that I remembered the Shower Incident.

Nobody was hurt. NOBODY WAS HURT! It’s a mess, but it can be cleaned up. Some things can be replaced. Others can’t, but we’ll survive. It wasn’t intentional; sometimes, kids get ahead of themselves and these things happen. It’s okay.

I actually sensed my own heart break a little at the girls’ sadly accepting responsibility for the damage their silly roughhousing caused; maybe Linda and John had been a bit broken-hearted, too.

Despite the lost treasures and damaged floor, there was also this: Now, when I tell the kids that things are getting out of hand, they will finally understand what I mean and will (maybe) tone it down. I sure as hell never raced through Kiki’s house again (which I now understand John and Linda knew). NATURAL CONSEQUENCES, YOU GUYS. A BEAUTIFUL THING.

Is it just me, or is it strange when this parenting thing comes full circle?

I hope our girls and their friends always feel comfortable in our house and its craziness. I hope they feel loved and respected as themselves. I hope they feel safe coming to us when mistakes are made, and welcome again after things are cleaned up (literally and metaphorically). I hope I’m able to see what’s really important even when things get messy. I hope our home is inviting and fun and joy-filled and awesome.

And I hope, the next time I say, “It’s too much. Tone it down!”, they’ll listen and TONE THAT STUFF DOWN before any other natural consequences occur, for the love.

Kiki and me, Disney World 1991, loved even after the Shower Incident.
Yes, I have a perm. #winning

(This story was shared with Ella and Annie’s enthusiastic permission.)