At our house, Christmas is Christmas because of the traditions. It just wouldn’t be Christmas without, among (many) other things, visits by Hermey (our house elf), eating popcorn while putting up the tree, receiving new pjs on Christmas Eve, or leaving a shot of whiskey for Santa alongside the cookies and milk (it’s cold on that ride, folks). I’ve always been someone who thrives on memories and ceremony and I was fortunate enough to have Nick agree to adopt nearly all of the Christmas customs that I celebrated growing up.

My girls have cottoned to these traditions just as strongly. If I forget something, or if I dare attempt to change even the smallest detail, Annie and Ella call me out immediately (“What happened?? These musical reindeer have always been in the dining room!”). (You know that we totally have musical reindeer.) While I’m all for honoring these established practices, sometimes it’s fun to try something new.

This year, I decided to try out two ideas: unwrapping and reading a Christmas book on every day of advent and practicing Random Acts of Christmas Kindness, or RACKs. (I’d love to claim that I thought up these schemes on my own but I totally stole them from my BFF Pinterest.) Given that I didn’t want to purchase 24 new holiday books, and given that we already have oodles of said books in the house, I opted to simply wrap two dozen of them and stack them up, ready to be opened each night.

Yes, I forgot to take a photo until after two weeks had passed. And yes, the books were stored on the dog kennel. We fancy up in here.

It’s been quite some time since I’ve done regular read-alouds with both girls, so I wasn’t entirely sure how it would go if I asked them to gather cozily on my bed and… unwrap… used Christmas books… But, to my delight, they seemed to really enjoy it – even look forward to it. Annie, especially (our bookworm), would bound into the bedroom each night and practically shimmer as she waited to see what the title would be, although both she and Ella exclaimed happily over favorites (“I love this one!”) and new (to them) titles (“I’ve never seen this one before!”). It was a quiet and lovely way to end each day; we’ll do it again for sure next year.

Cuddling in bed with our latest tome, with our previous volumes visible in the basket in the background…
Also, be forewarned: while you think it will be a thought-provoking, solemn holiday tale, Hans Christian Andersen’s The Little Match Girl might actually cause your children to have nightmares and imagine how it would feel to freeze to death. Oops.

If I were forced to choose just one new tradition to continue, however, it would actually be the RACKs. In contrast to the peaceful, sleep-inducing book tradition, the RACKs were vibrant and invigorating. The premise was really simple: find some way, any way, to be kind to another person. As I wrote on my Facebook page when I invited other friends to join the cause, they could be anything, “from really simple, non-monetary kindnesses (taking out the garbage, allowing someone to wedge in front of you in heavy traffic) to slightly bigger but not terribly complicated gestures (bringing a treat to a co-worker or the bus driver, giving a gift card to your postal worker, paying for coffee for the person behind you in line) to activities that require a bit more forethought (printing RACK cards and attaching candy canes to them and “bombing” a parking lot, taping microwave popcorn to a RedBox box) to things that are of a bit more significance monetarily (“sponsoring” a family for the holidays, donating to a food bank, etc.)… Whatever floats your boat and makes you happy because you think that it will make other people happy.
Anonymously. Randomly. Kindly.”

(One of my Jewish friends pointed out that these did not have to be only for Christmas, as they could be Random Acts of Chanukah Kindness, too. So awesome.)

The first official RACK that the girls and I did was to candy cane “bomb” the parking lot at their school so that the teachers would see the canes on their way out that afternoon. We invited Annie’s Girl Scout troop and their siblings to join us (see, I told you I’d rock my monthly meeting) and the response was super. 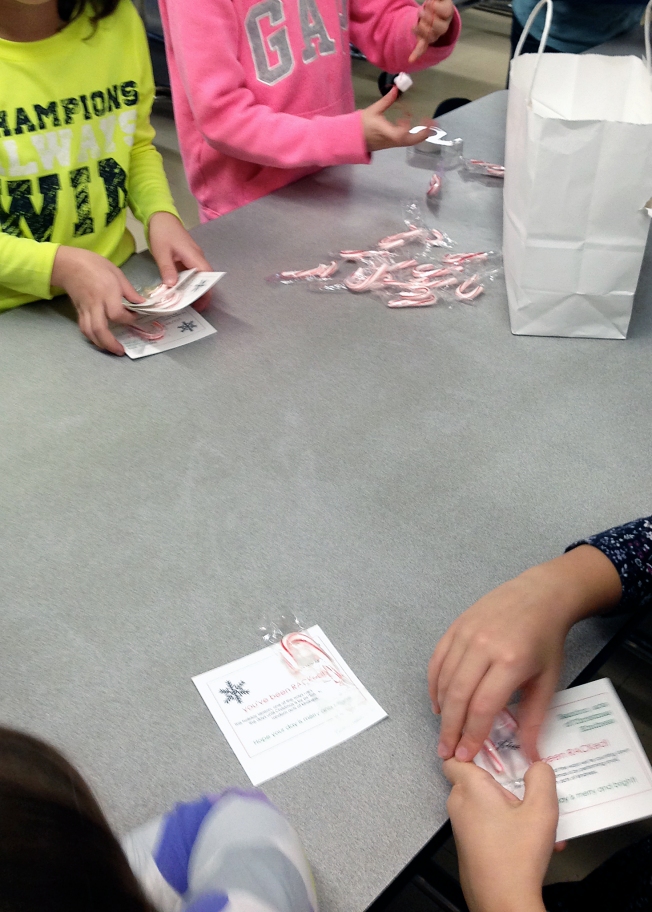 We could hardly keep up with the kids as they raced from car to car, gleefully slipping notes under windshields and ecstatically squealing with delight at the mere thought that this might brighten their teachers’ day.

After that, Annie and Ella and I were on a roll. We did chores around the house for one another just because. (Even though I’d normally grumble significantly at the thought of putting the girls’ clothes away to spare their lazy bums, or at the idea of doing the dishes for Nick so he could watch the hockey game in peace, somehow it felt different – good. Really good.) They made cards and brought them into school. We took RACK cards and candy canes with us and distributed them often – to the guys who helped load our Christmas tree onto the car, to people in line at Starbucks. We taped dollars around the dollar store and chuckled imagining people finding them and absconding away with their bounty.

By far, though, our favorite experience was when we RACKed out at the post office. We ventured over one afternoon when the girls got home from school and, as expected, the line was at least 20 people deep; suffice it to say that no one was smiling. Ella and Annie each walked up to the counter, chose an employee, and simply stood there, waiting until the most recent customer had finished. Once there was a slight break in the action, they politely slipped in and handed over the cards and candy. 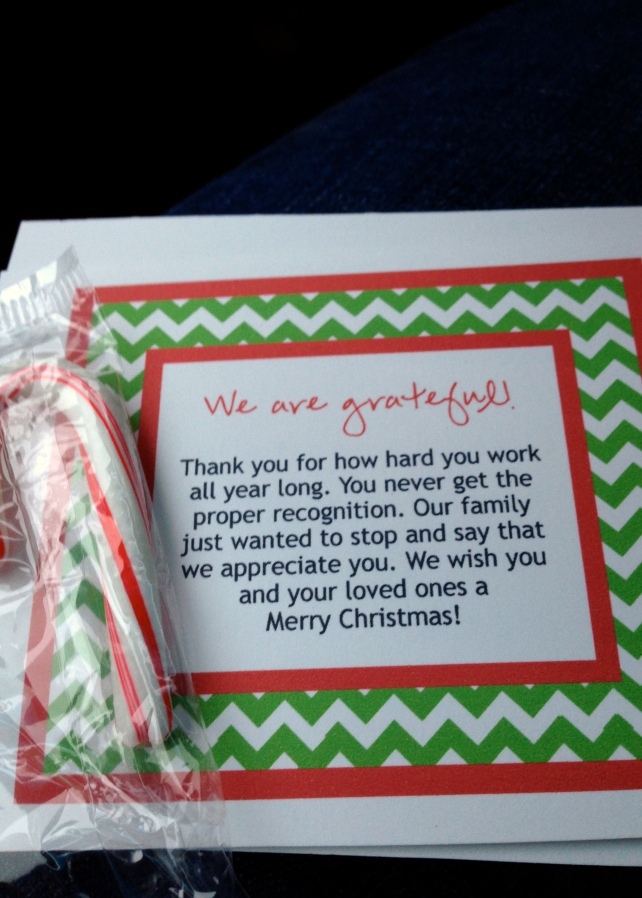 I can’t claim credit for this cute card, either – I found it here.

The postal workers looked stunned at first – but they quickly caught on and thanked the girls quite earnestly. The reaction from the other customers was instantaneous. I could see the grins creep over their faces, despite the packages at their feet and the seemingly interminable wait in line. The new twinkle in their eyes was unmistakable, that hint of happiness in the most unexpected of places.

We weren’t through, though, having brought with us three small collections of stamps along with other RACK cards. One at a time, we randomly chose customers in line and gave them the goodies. Their appreciative smiles were fantastic, but it was what happened next that was really incredible. As we were finishing, one of the recipients left her place in line to come over to us. She leaned in low, took my arm, and said, “My dad used to tell me to do something kind for someone else every single day. I’ve never forgotten that; it’s one of the most important lessons I learned. That’s what you’re teaching your daughters here today. Thanks for helping me to remember my dad, and to remember what’s most important. Your girls will never forget this.”

It took me at least two minutes to Photoshop my thumb to remove the hangnails and icky cuticles and leftover nail polish. Good thing I’m not vain or it might have been three.

Stunned, I started to pull Ella and Annie in to me to tell them how much their simple gesture had meant to this stranger when the final woman to whom they’d given the stamps called over to us to stop.

Puzzled, we did as she asked, only to find ourselves waiting for at least five minutes (no exaggeration) while she looked through her purse. (It’s one thing to do a random act of kindness and then flee anonymously into the night. [Or afternoon.] It’s another to do said act of kindness and then hang around while people stare at you. Awkward.) At last, after telling us umpteen times how thoughtful we were, what a lovely gesture this was, she emerged with a five dollar bill.

We briefly tried to protest, but she would have none of it.

“No, no. You keep it. You were so kind to me today – you made me feel so special. At the very least, go out and buy yourselves a couple of ice creams at McDonalds. Five dollars should do that, right? Go to McDonalds and treat yourselves. I can’t thank you enough for doing this for me.”

I finally decided that it would be extremely rude of us to turn away her act of kindness – after all, how would we have felt if we’d been rebuffed while performing any of our RACKs? – so we thanked her profusely and took off for the car.

The girls were dumbfounded. “Mom – we weren’t doing this to get paid!” they argued. “We actually made money in the post office today!” Still, they couldn’t stop grinning like hyenas all the way home – not because of their newfound riches but because, in their words, “Doing nice things for other people is the best feeling ever!”

And so it was. Every time I thought of the way the postal workers’ faces lit up, or the way the customers’ demeanor changed when they saw what Ella and Annie were up to, or how that woman spoke about her dad, or about the lady who felt so moved, she actually paid us – literally – a kindness in return, I felt like I was walking on air.

This is what Christmas is supposed to be, is it not? Doing unto others. Spreading joy. Sharing magic. The truest spirit of Christmas there is.

During the drive home, it was agreed that I would keep the five dollar bill (since, they wisely cautioned, it would probably be a bad idea to rip it in half). When I asked how they’d like to spend it, since we don’t really go to McDonalds all that often, their response was swift: “We really should spend it doing something nice for someone else, right Mom?”

We did exactly that.

* fear not, we’re now on a mission to do RAKs throughout the year, so we won’t have to hold off until Christmas… but I have a feeling it will feel extra-awesome to do RACKs again when the time comes.