To borrow from Lin-Manual Miranda, it was a bit of a weekend*.

Ten long months ago (looooong months ago), I’d been among the throngs of people hovered over their laptops and Ticketmaster apps to press the “Search for Tickets” button at exactly 10:00 on a Thursday morning in December with the hopes of getting to see Adele in concert. Amazingly, I got through and was able to secure tickets for the four of us to attend her final show in Toronto.

Thus began the waiting. And the secrecy. Nick and I knew ten months would be an eternity for the girls, so we deliberately kept knowledge of the concert from them until an unexpected Adele radio moment last month where we caved and told Ella and Annie that what they thought was merely a weekend getaway to Toronto was more than just seeing the sights.

Ana so, at long, long last, after wondering if after all these (months) we’d be like to meet…
Hello.

Giddy outside the Air Canada Centre.

This was the Ella and Annie’s first concert (okay, first real concert; they did see the Laurie Berkener Band when they were about 1.5 and 3.5) and, after having watched 738 YouTube videos of other Adele performances, we knew it would be one helluva show, an experience that would be hard to top.

We never dreamed it would become a once-in-a-lifetime event.

We arrived at the Air Canada Centre with plenty of time to settle in. Knowing the kiddos would be uber-tired by the end of the night (and that we wouldn’t want to leave mid-show to shop), I took the girls to check out the souvenirs before the show. When we made it to the front of the line, Ella and I quickly chose t-shirts. Annie hemmed and hawed, saying that she wanted the black notebook tucked in the glass case and “a pencil.” Because pencils were only available by the $25 package and the notebook cost $40, I told her she would have to choose one or the other (even with the exchange rate, $65 for pencils and some paper wasn’t happening).

She chose the notebook.

As the woman who was helping us brought the book out of the case, the employee standing next to her leaned over and beckoned me close so I could hear him. In a whisper, he told me, “You’ve selected a unique and special item. Open the first page.”

My stomach immediately jolted. Why would he have us check the page if nothing was there? Holy shit. WHAT WAS THERE??? There was no way – NO WAY – that Adele had anything to do with that page… Omg…

My hands actually began to shake as I handed the notebook to Annie. “Open it!” I barked, startling her (apparently, my “filled with excitement and anticipation” voice sounds a lot like my, “you’re in deep doodoo” voice). She did… revealing what looked to be a signature.

As she stared reverently at her autographed notebook, I handed over my credit card, half expecting the employees to tell us that our “unique and special item” cost $400, not $40… but no. They rang the transaction up as if nothing had happened. Growing skeptical, I asked the woman who was bagging up our shirts, “Is this for real??”

Again, the man beside her answered. “It is. She signed five of them after the VIP event this afternoon and we’re selling them randomly around the arena. See? They even have today’s date. Your daughter made a lucky choice.” 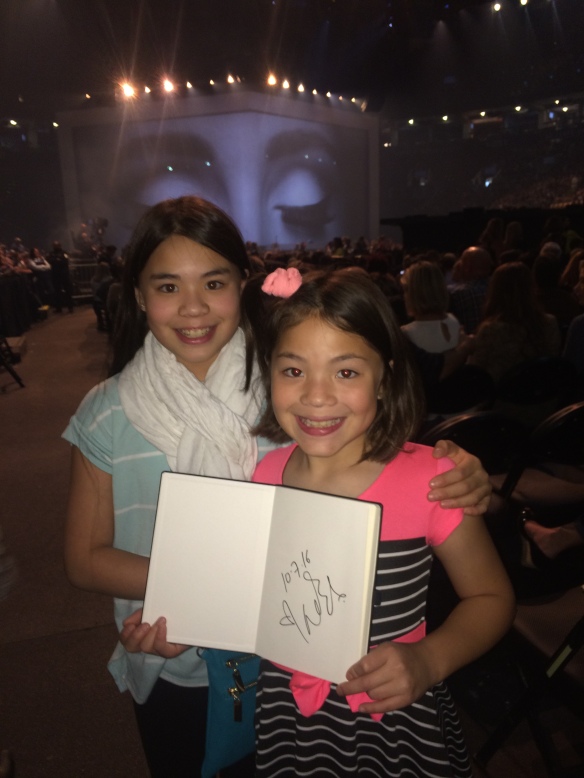 Posing before the show with the world’s luckiest notebook.

I’m not sure that the girls fully appreciated the incredibleness of this (although my near-hyperventilating probably clued them in), but it certainly caused us all to be in a state of wonder as the concert began.

And the concert itself? Adele, live and in person and singing and talking and laughing that marvelous cackle?
Breathtaking. Hilarious. Astounding. Powerful. Triumphant. Joyful.

We had floor seats and assumed the rest of the floor-goers would remain seated for most of the concert. HAHAHA. For a few songs, Adele actually instructed us to park our tushes and sit, but for the rest? FULL ON STANDING for the entire show… which meant that Ella and Annie could see nothing but the shoulders of the people in front of us for the entire show.

We attempted to stand the girls on their folding chairs, making sure they weren’t taller than the folks behind us… but, since we were on the end of the row and, thus, easily accessible, the security guards put the kibosh on that quickly (By contrast, the family in the middle of the row ahead of us stood their children on chairs the whole time.) “Our” security guard (Richard) couldn’t have been nicer, explaining he felt terrible our kids couldn’t see; it was just a safety issue. It was frustrating to have the rules enforced only for those within reach, but we understood and readily complied.

Making the best of things, we watched Adele on the overhead screens and held the girls whenever possible. Midway through the show, as Adele made her way to the small, closer, middle-of-the-floor-seats stage from which she’d emerged at the beginning, Richard tapped my shoulder. “Would your girls like to come with me to a spot where they can see a little better?”

Annie and Ella would later tell us they were brought to a clearing closer to the small stage, offering an unobstructed view. At the time, we had no idea where they were, only that Richard was in charge. Every so often, he’d catch our eye and give us the thumbs-up that all was well; we trusted that it was. Several songs later, the girls returned to us, all smiles.

Ninety-or-so minutes after she began, Adele disappeared from the small stage. Richard confirmed that she wasn’t quite finished, silently holding up two fingers and mouthing, “Two more!”

We were enjoying the penultimate number (“When We Were Young”) when yet another security guard tapped me on the shoulder. “Would your children like to see the last song from the front of the stage?”

The girls were actually hesitant – the stage was pretty far away – but when you’re offered the chance to see Adele from the freakin’ best spot in the arena, you do not turn it down. That said, I had no idea how we’d find them in the mad crush when the concert ended so I, too, became hesitant. Sensing my uncertainty, the guard leaned in again. “Mom, you’d be coming, too!”

I took a moment to confirm with the guard that Nick was also welcome (yes), and then, t-shirts and notebook and bags in hand, we began following her down the outer aisle of the floor, past row after row… after row… after row. I kept saying aloud to the girls, “I can hardly breathe. Oh my God, oh my God. I can’t believe it! I can hardly breathe.” They probably thought I was insane.

When, finally, we reached a temporary barrier approximately ten rows from the front, we stopped… but were beckoned on by the security guard, who adroitly pushed the gate aside and continued to make her way ahead. When we reached the seeming end of the aisle several feet from the barriers in front of the stage and, again, it seemed we could go no further, the guard asked other people to move out of the way and told us to keep going.

And when we reached the metal barriers immediately in front of the stage and, again, it seemed we could go no further, the guards physically moved the people who were already standing there, instructing, “Let these little girls in!”

What alternate reality is this???

Thus it was that we found as close as humanly possible to Adele (without being on the stage) as she sang “Rolling in the Deep” for her final encore. Nick kept back a few yards, not wanting to crowd the space, while I remained near enough to the girls so when all hell broke loose at the show’s conclusion, I could easily locate them… which meant when Adele walked by and waved, she looked all three of us directly in the eye and smiled.

We made eye contact with Adele and she SMILED AT US.

So basically, we were privately serenaded by Adele. 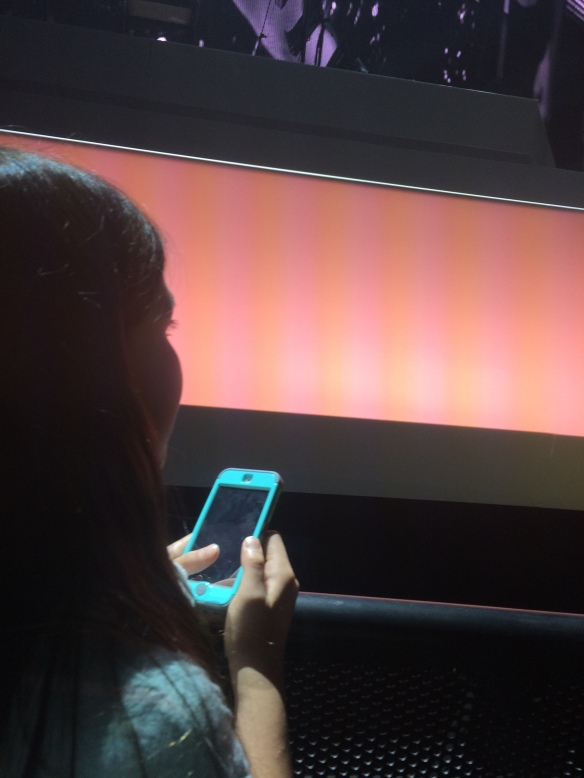 Ella with her iPod to record this mind-boggling turn of events. 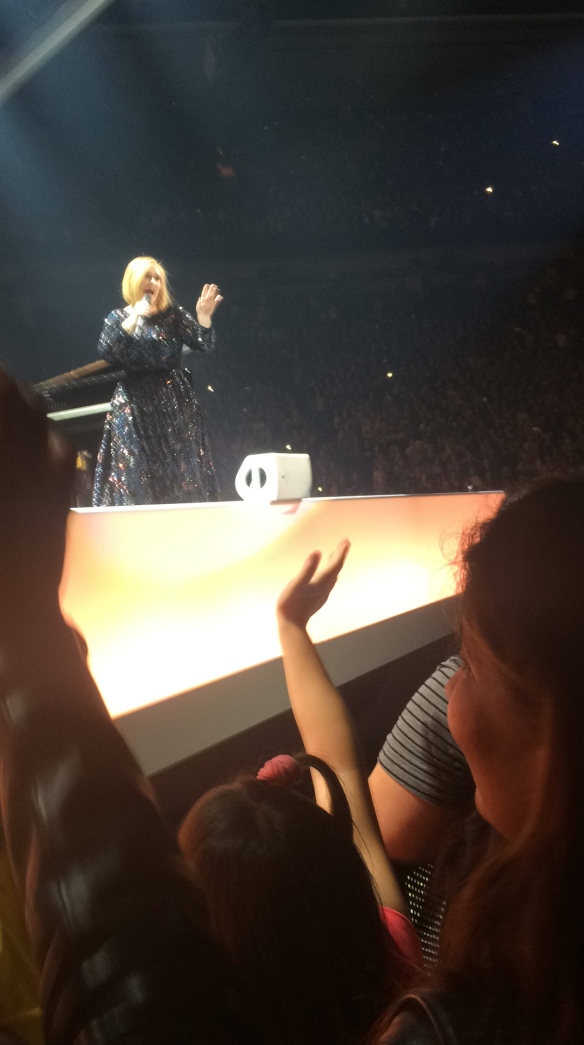 Annie waving madly to Adele – WHO FREAKIN’ WAVED BACK.

AND THEN ADELE WAVED AT ME. And I died and went to heaven right then and there. 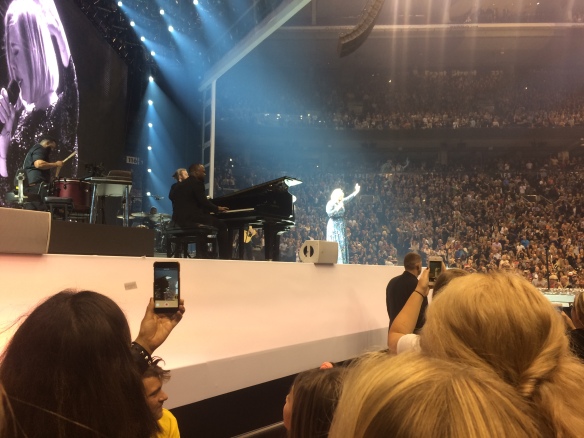 House lights on: final goodbye before the confetti cannons exploded.

On our way out, we made sure to pass Richard and thank him for – well, for making it the best concert imaginable. I have no idea what prompted him to do everything in his power to give us such an unbelievable night, but I am ridiculously grateful and awed that he did.

Although the girls managed to fall asleep almost as soon as their heads hit their pillows, I was up for at least three more hours, running on adrenaline and shock and kettle corn. Had that really happened? The notebook? Finally hearing Adele in person? Being escorted to the front? It seemed impossible… and yet, there it was. Videos and photos on my phone, confetti in my purse, smile plastered to my face.

The girls’ concert bar has now been set so high, they’ll likely never even glimpse it again. But that’s okay. For one night, we really had it all.

* this was actually two weekends ago, but life got in the way and so… here we are