Ella started walking to school by herself this year. It’s a 3-minute walk through our (very friendly) neighbors’ yards to the school, which sits across a street that’s watched over by our beloved crossing guard, Mrs. H. I don’t worry that Ella will make it to school (if I really did, she wouldn’t be walking…), but especially after watching her slide off of a few snowbanks and into the side of the road this winter, I wanted to make sure she was getting there on time and safely. Since I didn’t want to bug the school secretary to check on Ella’s whereabouts, but since Ella didn’t want me accompanying her to school (second-graders can be wicked independent, y’all), we agreed upon a compromise: she would phone me when she got to her classroom.

What do you call the winner of the cow beauty pageant?
The Dairy Queen!

For a while, she phoned dutifully. But after the New Year, something changed and the calls stopped coming. At first, I was sure that she was deliberately ignoring my instructions – after all, how could she possibly forget when we’d discussed it three minutes earlier?? There were a few ugly weeks (complicated by some general issues with lying) when she’d promise to call, no phone would ring, and I’d bust it over to the school, partly to check on her, and partly to maybe embarrass her a little into calling. (Feel free to copy my parenting anytime.)

Much wringing-of-hands later, I finally discovered that she was becoming so engrossed in her daily classroom routine, she legitimately spaced out on the phone call thing. Long story short (and why did I not think of this sooner???), I put a “Call Home!” note in her take-home folder — the one that she’s required to check as soon as she arrives to her classroom — and that seemed to fix things. 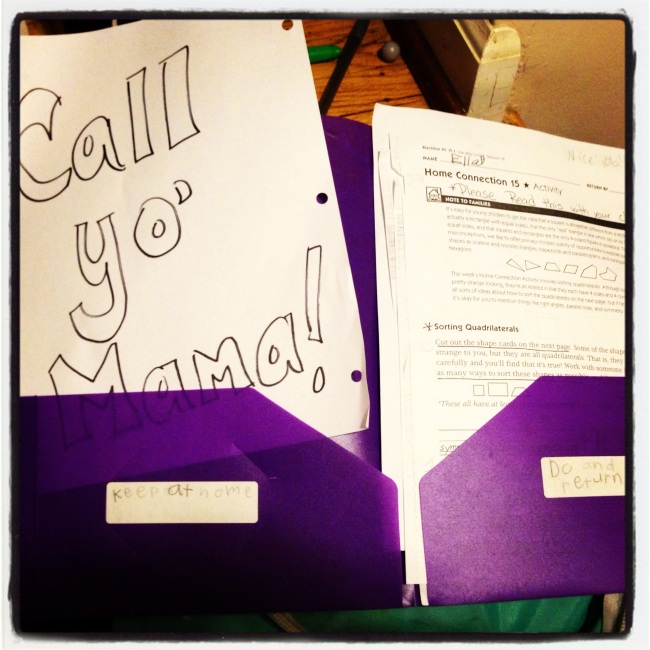 But what’s really made a difference has been telling a joke.

What do you get when you cross a parrot and a centipede?

Up until about a month ago, the folder-note would prompt Ella to call home, but it was still clearly an annoyance for her. I’d bid her good day and tell her I loved her, but she’d remain quiet on the other end or would even answer brusquely (“OKAY, Mom!”). Then one day, quite randomly, I decided to tell her a joke when she phoned. She was obviously startled and took a moment to even laugh at the joke.  The giggle did come, however, and then – get this! – she actually told me she loved me back. Right there on the phone! With her teacher and classmates nearby! Which is crazy, because although they see Ella reach for my hand every time she walks with me, and although she runs up to hug me each time she sees me in school, she might still have been keeping her love for me a secret. Better not to get too mushy at 8:30 a.m., anyway.

Since then, I’ve had a new joke ready to go every time she calls (this is not an easy feat — Google and I are on a first-name basis), and her laughter and occasional I love yous (she makes me work; I only get one if she really likes the joke) absolutely make my morning. It’s not often that I can look back and say, Yep, as a parent, I totally nailed that one, but in this case, I totally nailed it – not only because I succeeded in getting her to call home, but because she and I now have a special moment to look forward to every day.

Plus, who doesn’t like starting off their day with a little bathroom humor?

Why can’t you hear a pterodactyl when it goes to the bathroom?

Because the ‘p’ is silent.

Part of her Mother’s Day gift to me. I’m on the left, telling her a joke over the phone. We prefer to go barefoot.