The start of school smells good. I don’t just say this because today was one of the most perfect days, weatherwise, we’ve experienced maybe, like, ever, nor because of the girls’ fresh, clean, new school stuff, all of which comes with its fresh, clean, new smell… New backpacks, new supplies (erasers, I heart you), new clothes, new lunch boxes… Each has its own crisp aroma, un-stained, not yet having taken on the stank of leftover spaghetti or forgotten sneakers.

Beyond that, however, there’s still the geeky kid in me who always loved the start of school each year, and that kid sits eagerly beside the teacher in me, who met the beginning of each September with equal parts trepidation and exhilaration. Yes, the year holds the possibility of something dreadful, of birds pooping on your head while you wait in line to go inside from recess (first grade, true story; Sarah Tallman was kind enough to help get the poop out of my hair while everyone else laughed), of classmates who are tyrants hiding behind polo shirts and jeggings, of parents who think that little Junior deserves special treatment and plays the not my child card every. single. time. But there’s also the promise of new friends, of clean notebooks and smooth desks, of games at recess and giggles during library, of field trips and science experiments, of fall and cinnamon and hay rides.

A month in, school begins to take on the metallic, pungent smell of tiny, sweaty bodies who defy logic and seem to need deodorant, despite being only eight. But the start of school? Those first, unblemished, ripe-with-promise weeks? They smell great.

Each year, as the girls begin school, I try to do something special for them – a fun first day breakfast, a treat when they come home, a dinner of their choosing, notes in their backpacks – something to make this day stand apart from the other 179 days of the school calendar. This year, with the (very) recent loss of my much-adored father-in-law (there will be more to say on this in coming weeks – I promised Bill it would be so – but right now, I need to wait and process and grieve, and think about just what I’d like to write), I have had to cut myself a break and be patient with my lack of focus… but I still want to be doing these special things. Not for any grander purpose, not because of any outside pressure, not even because of expectations that I may have inadvertently raised in my children, but simply because they make me happy.

And, I’m learning, that’s a pretty damn good reason for doing most things.

Except watching Real Housewives (of Anywhere). Or wearing Uggs year-round. Or preferring dark chocolate to milk. There are rules, people.

I’m also learning what I can and cannot do, and I’m learning to be okay with it. Which isn’t such a novel concept, except I recently read two seemingly opposing blog posts and found myself agreeing with basically everything they both said. Which means… thinking. And growing. And learning. Or something. And all that jazz.

First, I read this post, and loved it not only because “Pinterest Bitches” is a fabulous phrase and they worked “explosive diarrhea” into their narrative, but also because, hell yes! Crazytown! A stitched-together pencil caddy? “Yay school” and a little globe? Have we all gone insane?? Reading that post made me feel instantly better about getting the time wrong for Ella’s meet-the-teacher day, and going to Target yesterday in biker shorts and a dirty Zumba t-shirt.

But then I read this post today. Michelle had me with “braless in the drop off lane”(and also made me feel a little like maybe she was stalking me with the whole, Does Emily pause before posting about finally, finally having her depression under control because she knows there are other moms still struggling? thing), but also got my attention by mentioning, despite her house never being company-ready, that she does throw “Pinterest worthy” parties… both of which sounded awfully familiar. (Not because the parties I throw are necessarily Pinterest worthy, but because I, um, did post photos here specifically so I could put them on Pinterest.)

So… It seems that the Pinterest Bitch would be… me.

The more I’ve thought about it, however, the more I’ve decided that the dichotomy not only makes sense… it’s okay. It’s good, even. It’s just me; it’s who I am. It hurts no one (except myself, when I stay up too late making Looney Tunes birthday cakes or getting pancake batter ready to go for the first day of school). It’s a bit nutty, but that’s fine. It makes me happy.

I can make cute first-day-of-school breakfasts with pancakes shaped like school buses and the girls’ current grade numbers.

Don’t worry; Annie eventually received more than 1 cut-up strawberry. We are all about equity in this house.

I can make brownies for when the girls come home from school, with their newly-begun grade levels powdered-sugared onto them.

Notice how these are the corners? I ate the gooey middle piece. It was delicious.

I can send my kids off to school, and welcome them home from their first day, with a bang (a bang that is created with the help of boxed mixes from Wegmans, but a bang nonetheless), and they love it, and I love it, and it’s just the way it goes. I cannot, however, manage to keep our fridge and cupboards stocked with actual necessary food, so when my kids request a sandwich with pepperoni and cheese, they’re going to get some pepperoni and a torn-up cheese stick instead.

School bus pancakes. Cheese stick sandwiches. Pretty much me in a nutshell. 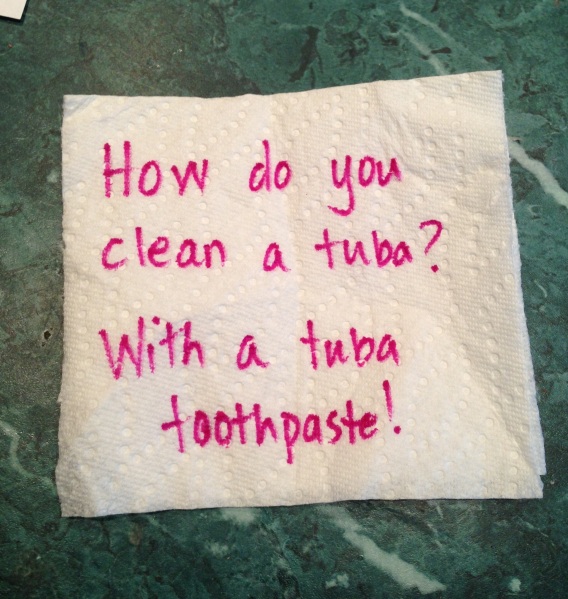 … But I cannot organize the papers in the kitchen – nor manage to replace the window shade that’s been broken for at least two years – to save my soul.

HOLY CRAP, she has gotten so absurdly old.

… But, for the life of me, I cannot get ahold of the weeds that are overtaking every spare space in our garden, in the yard, and on the sidewalk.

The foot-tall “bushes” to the left, in front of the bricks? Yeah. Weeds. Every last one.

It used to be that both sides of this coin bothered and embarrassed me. I didn’t want to admit that I studied hair blogs so that I could send the girls off to school with cute and fancy ‘dos, because that somehow felt like something I should be ashamed of – as though admitting it would somehow be showing off, or trying to put other non-hairdo-ing parents down, or saying that I had too much time on my hands, or making a judgement one way or another.

And yet, I also didn’t want to admit that the third seat of the car is so filled with dog fur, we cannot have people ride there without producing a towel for them to sit on. That was also something to be ashamed of, an admission that I cannot keep everything together, that I let some things go.

But lately – and quite uncharacteristically – I’ve been going easy on myself. I’ve come to realize that I don’t always have it all together (a shocker, I know, I know), not even in a scattered sort of way, and that’s okay. I’ve certainly never felt that I’m Super Mom, but I’m coming to see that my priorities are just that — my priorities — and that automatically makes them different from everyone else’s… but it doesn’t make them bad or wrong, nor something to be bothered by or ashamed of.

Again, to paraphrase Michelle (can you tell I really liked her post?!), I’m being a good parent. I’m loving my kids. I’m doing the best I can.

And it makes me happy.

I’m going to scour Pinterest for ideas and then send my girls to school with Halloween-themed Bento boxes – because it makes me smile – and doing so says nothing about anyone else who thinks that Bento boxes are as absurd as The Real Housewives. It says only that I like them, and that’s okay.

I’m never going to knit the girls a scarf, nor make them fabulous scrapbooks, nor send them to school with stitched-together pencil caddies, because that’s just not my bag… which is also okay. And I will always have a perpetually messy stovetop, because making Halloween-themed Bento boxes takes priority over stovetop scrubbing (plus also, hello ADHD), and that says nothing about people who do prize a gleaming kitchen. It only says that I don’t, and that’s okay, too.

Some things I can do.
Others, I can’t.
Or maybe I just don’t. Either way, it’s okay.

I’m going to give myself more of a break, cut myself a little more slack, and allow life to slowly come back together, without rushing it or being impatient with myself when I need to take a little more time. I’m going to do the things that make me happy, and worry far less about the things that don’t (except for, like, mowing the lawn and paying bills, because when I let those slide, it doesn’t work so well), and I’m going to stop apologizing for both. And I’m going to encourage everyone around me to do the very same.

In short, I’m going to quit being a jackass to myself.

4 thoughts on “Move over, Jackass”