Nick and I moved to Denver in 1997, just after graduating from college. Colorado is a great place, and we eagerly participated in all of the standard Coloradan practices: hiking fourteeners, following the Broncos’ every move (including whatever John Elway’s son was up to in Pop Warner football), consuming burritos with copious amounts of green chili, enduring – even celebrating – the uniquely Denver-ian weather (one April day, we took in a Rockies game where it first snowed and then became so hot, we had to change into shorts), scoffing at the Trust Fund hippies in Boulder who wore dreadlocks and Abercrombie backpacks, sagely warning visitors against the very real effects of altitude sickness (while being proudly cocky that we’d become so acclimated to Denver life, we no longer became ill when we’d return from an out-of-state visit), consuming too many three-shot margaritas at Rio Grande, taking off into the mountains to ski or camp in the Rocky Mountain National Forest, chortling at the (then-relatively-new) Denver International Airport with its odd, white, nipple-peaked design, eschewing a map so long as you could see the mountains (WEST, people!), and finally — after 3.5 years — adopting a dog.

Very spiffy in her new bandana.

She was a not-quite-one-year-old Beagle/Lab mix and – knowing we were going to move back east that spring, but wanting to take a bit of Denver with us — we named her Madison, after Madison Street (on which we lived). She had been mistreated prior to our adopting her (the vet said that she was so dehydrated, it was only due to sheer will power that she was still standing), but she had the sweetest demeanor imaginable. We instantly fell in love.

Maddy became our constant companion, accompanying us to pet-friendly restaurants, friends’ parties (where she’d join the pack of dogs already there), and on road trips. Because we didn’t know when we’d next be back in Colorado, we decided to tour the area before leaving, from Breckenridge to Mesa Verde to Wyoming and back. 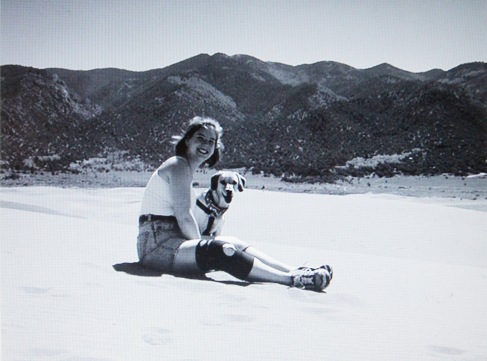 Maddy-bug was an excellent traveler – quiet and patient, but eager to explore. Despite her smallish build, she was tireless going up and down Colorado’s many peaks.

When it was time to drive back to New York, we meticulously researched dog-friendly hotels (which, in pre-Google 2001, was a form of internationally recognized torture: you actually had to call places and ask. The horror). And so, armed with our handy dandy AAA Trip Tiks (holla!), we began the trek across the country, with Madison taking her place in the footwell on the passenger side (the rest of the car was entirely full of our stuff — all of our most important belongings, especially the box with the wedding paraphernalia for our upcoming nuptials, the ones we didn’t want to send in the U-Haul because we wanted to keep them safe with us).

Posing by one of the most awesome mistakes ever.

We first drove through Kansas, where we narrowly avoided being hit by a tornado (no joke). In Missouri, while Maddy lounged in our hotels, Nick and I ate amazing Kansas City barbecue and saw Mark McGuire hit a home run in Busch Stadium in St. Louis. We then moseyed into Tennessee, planning to stop first in Memphis and then make our way over to Nashville.

The two days we spent in Memphis were fantastic. We reveled at the bizarrely American experience of somberly visiting the National Civil Rights Museum (and feeling awe, sadness, and gratitude as we stood in the hotel room where Martin Luther King, Jr. was assassinated) one day and then frolicking on over to Graceland and taking in the shag carpeting and Elvis’s many sequined jumpsuits. We ate more delicious barbecue and took in some excellent street music before collapsing in our hotel that final night, ready to head over to Nashville in the morning.

And that’s when we got the call.

When the hotel phone rings at 6:00 a.m. and you didn’t schedule a wake-up call, you can pretty much assume they’re not calling to offer free breakfast in bed. The desk clerk informed us that there had been several auto break-ins the night before, and that our car had been one of the unlucky ones. The good news was, although the other cars had had their windows smashed and had been obviously ransacked, our car was intact and it looked as though all was okay — but perhaps we should come take a look, anyway.

We roused ourselves as best we could and, knowing that Madison hadn’t done her business that morning, took her with us as we headed down to the parking lot. At first, all seemed well; the car looked unharmed. The moment we opened the doors, however, we realized that the thieves had not skipped our car – they’d simply been able to get in without breaking any windows by playing with the code on the keypad and unlocking the doors.

Since we were only staying for two nights in the hotel, we’d taken the bare minimum with us; everything else was still in the car. Clothing was everywhere – they’d gone through our suitcases and discarded whatever they didn’t want, casting things off and scattering them around like drunken sorority sisters – making it seem as though very little was missing.
Um. Not so.

By now, it was closer to 7:00, and the sun was already high in the early summer sky. Several police officers were on the scene to document the damage and were asking us questions to determine just what was missing. The cop who was assigned to us was probably a very nice guy… except that I don’t really know, because we could hardly understand him. Not only did he have a very thick Southern accent, he also had a bit of a speech impediment, thereby making it even more difficult to understand what he was saying. (Not that we were contributing much ourselves — being roused at 6 a.m. in a strange city, being on the road for a week already, and, you know, having all of our stuff stolen, we weren’t really at our best.) Communication was… difficult.

We began trying to rattle off the stolen items, but it was a bit like Who’s On First because everything had to be repeated, except without the cute Twitter #hashtags.

#Canyoutellmeexactlywhat’smissinghere,ma’am?
Pardon me?
What. Is. Missing?
Well, they took our CDs.
#Theytookyourseeds?
No. Our SEE-DEEs.
#HowmanyCDsdidyouhave?
I’m sorry, could you repeat that?
I said, How. Many. CDs. Did. You. Have.
I don’t know.
Third base!

Still, we pressed on, listing item after item… clothing, CDs (our entire collection – nearly 2,000 discs), original documents (birth certificates, social security cards), Nick’s early adoption photos, our wedding rings, the entire wedding box filled with every contract or magazine clipping I’d put together so far, my wallet, Nick’s travel guitar… All of the MOST IMPORTANT ITEMS that we “couldn’t risk” leaving in the U-Haul.

We’d rattle off yet another missing item, the cop would try to confirm what we’d just told him, we’d ask him to repeat himself because we didn’t understand what he’d just said, he’d repeat himself more slowly, we’d repeat ourselves, and then finally he’d write it down. Listing each stolen item, I became more and more distraught — stealing our clearly amazing wardrobe I could kind of understand, but why on earth would anyone want the handwritten “We’ll Miss You” notes my students had given me, or the freakin’ Graceland souvenirs that could be purchased just down the block?? And then we discovered the missing item that put me over the edge: the bag of bags.

Knowing we’d have to pick up after Madison on our journey, we’d arduously collected plastic bags for months, stuffing dozens of them into another grocery bag so we could keep them all together. And they’d taken them. They’d taken the bag of bags. Now, not only were our wedding rings and my driver’s license in someone else’s possession, we couldn’t even pick up Madison’s poop because some hoodlum jerks had stolen THE BAG OF BAGS.

It was the discovery of the missing bags that prompted us to remember that Madison was there. Up until now, through our wailing and teeth-gnashing and Who’s on First wrangling, she’d been completely silent, so we kind of forgot about her. By the time we snapped out of our fog of disbelief, the Memphis sun had been blazing down — on a bare hotel parking lot — for a good hour, making the pavement feel like lava. Or, at least, I imagine that it felt like lava, because of how poor Madison was behaving.

She had clearly figured out that the white parking line was cooler than the blistering pavement, and had carefully positioned her paws one in front of the other — all four in a row — so that they were on that white line. But the heat must still have been getting to her, because she was lifting up one paw at a time (which was the most she could do; two would cause her to topple over) to give herself some relief. Another time, this might have been adorable — aww, look, it’s like some kind of puppy ballet! — but when we realized that we were effectively burning her feet off, we quickly took her back indoors. Thank God she didn’t have to poop, because, you know… NO BAGS.

(You’ll notice the lack of photographic evidence of our cross-country excursion; naturally, our camera was stolen too, and cell-phone cameras were, like, not invented yet.)

Eventually, we settled things with the cop, reorganized what was left of our belongings, and took off east again, very grateful that the car itself hadn’t been harmed, but grumpily flipping through radio stations because all of our music was gone. A week later (after stops in Atlanta and Charleston), we reached our final destination in New York. And Madison was still at our side, feet soothed, additional plastic bags procured.

And so it has been for the past 12 years — off on adventures, our Buggo at our side. We’ve taken her with us to 25 states, acquired two other pet dogs, two daughters, have raised three service dogs, and have lived in three homes since then, but the adventure has continued. Until today.

Today, we said goodbye to our Madison. To our constant companion, our long-ago Therapy Dog. To our Golden Girl, who endured the Memphis heat, puppies nipping at her ears to get her to play, children climbing on her, and countless other indignities — all patiently (albeit sometimes grudgingly – that dog forgot nothing and let you know it) and without complaint (well, except when we brought the kids home from the hospital; Maddy never forgave us for that). There was something about her incredible personality that made everyone who encountered her feel better, loved, calmer. She never tired of being petted or cuddled, but somehow you were the one who benefited from it; friend after friend visited us and would invite Madison to sleep with them. More than one guest threatened to pack her in their suitcase and spirit her away with them.
She was, very simply, the best.

Thanks for twelve-plus amazing years, darling Mads. You are the very sweetest, most endearing dog imaginable, and you’ll always be our first baby. May your days from here on out be filled with mountain smells, delicious treats, ducks to chase, and endless windows to look out of and watch the world go by. We adore you, and will, forever. 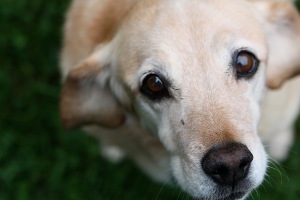 5 thoughts on “One more for the road”