Having not grown up near any of my grandparents, living only ten minutes from my grandmother for the past six-and-a-half years has been a novel, and excellent, experience for me. It’s especially fantastic that Ella and Annie have the opportunity to grow up with their great-grandmother (whom they call Phoofsy) just around the corner. She’s been the girls’ “important person” at school Halloween parties, attended soccer games and dance recitals and swim meets, joined us for each and every birthday or holiday celebration, and has endured enjoyed countless impromptu “shows” in our living room  (“Oh, another rendition of ‘Let It Go,’ but this time you’ve got a full costume change built into the performance? Isn’t that neat!”). She even watches the girls for me every Thursday when I teach piano.

Plus, you know, there’s the lake – where Phoofsy lives from Memorial Day until Labor Day and where we spend at least half of our summer days. Annie and Ella have spent eons more time with Phoofsy since we moved here than I did in the previous thirty-plus years of my life. Which is cool in its own right, but which is really super because Phoofsy kicks ass.

There are plenty of great-grandparents who, understandably, aren’t exactly firecrackers. Not Phoofsy. She may be a few months shy of ninety-four (and she doesn’t mind that I’m sharing this with you), but she’s got a more active social life than I do. She’s played bridge online for years and has a Facebook account that she uses daily, commenting on our photos and accidentally “liking” pages that then continue to appear in her feed. (“Why do I keep seeing pictures of this Lady Gaga? She dresses very strangely…”) We used to email but now we Facetime. She also reads this blog and is okay with me calling her kick-ass. (Right, Phoof? ‘Cause you totally are.)

While all of the above is true, one of the best things about Phoofsy is that she is a tremendously good sport. She has hula hooped in our garage and downhill skied standing on the Wii board. She gamely wears Rainbow Loom bracelets to bridge and has attempted to catch broccoli in her mouth when it was flung at her by the chef at the Hibachi restaurant.  She even refused to take the pass we offered her when we played our ridiculous Lake Game last summer, and thus wound up wearing a life jacket inside the house and going all the way down to the dock – in the dark – and trying to hit the raft with a piece of shale.

And so it was no surprise, really, when she was over the other night for Nick’s birthday, took notice of the hockey gear he’d brought inside to warm it up before his game, and then proceeded to try on the various garments to see what they felt like.

It started innocently enough: “Do you really have to wear these enormous things?”
“Yes, Grandma. They protect my hands.” 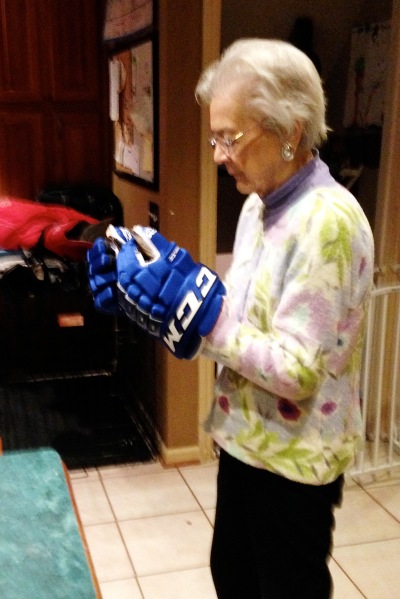 Side note: Phoofsy is always impeccably dressed
Side note two: I knew I’d have to act fast to get these photos, so I didn’t turn on the flash on my phone, meaning that they’re blurry. But that’s okay, because their bodacious awesomeness more than makes up for their poor quality.

Knowing he was already halfway there, Nick’s eyes took on an impish gleam as he suggested that, so long as she had the gloves on, she might as well wear the helmet, too. 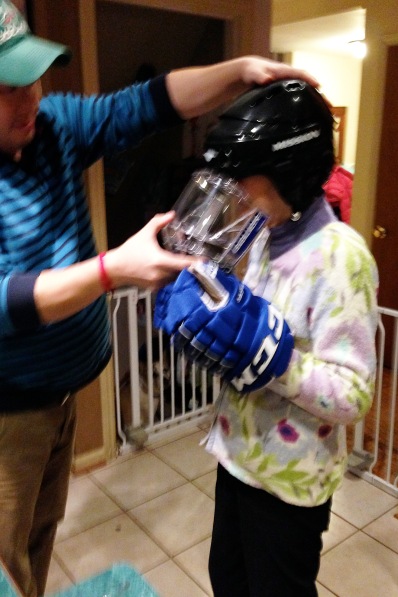 “It just slides on like this… Oops, your glasses are in the way – no, you can’t reach them because of the gloves… Here, I’ll take ‘em off… One second, just about there…”

Annnnd this just became one of the best moments of my life.

Weighing the success he’d had, Nick decided to press his luck even further and get really cheeky.
“But Grandma – that’s nothing. You should see what I have to wear when I play goalie!”

“You have to hold a stick, too? AND try to catch a puck? But these are already heavy as lead!” 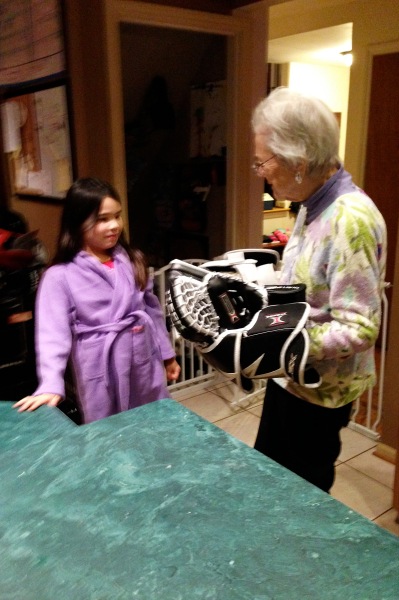 “Can you believe that your dad has to wear all this? How does he even move?”

Which prompted Ella to join the fray… 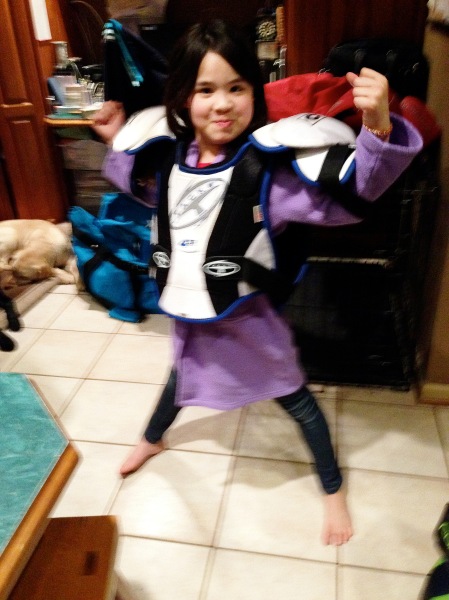 She would like you to know that it wasn’t bedtime; she was wearing her robe because she was cold. Which makes total sense, ‘cause her closet isn’t full of at least two dozen sweatshirts or anything…

And finally… the pièce de résistance… The goalie stick. 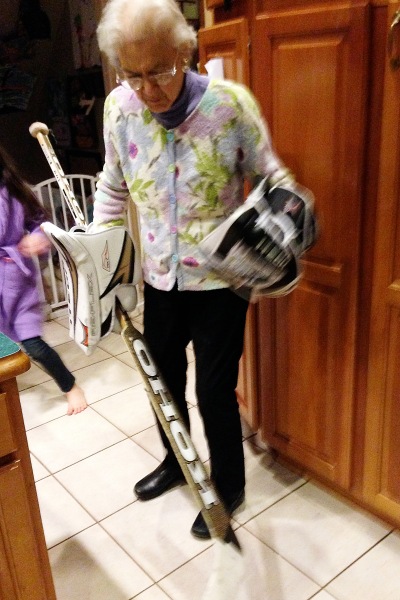 I loved getting together with my grandparents as a kid; each visit was eagerly anticipated and memorable. I didn’t miss living near them because I didn’t know anything different.
But I’m damn glad that my girls do know something different. We may not live near any of their grandparents, but we live near their Phoofsy, and the wonder of that cannot be understated, nor can it be fully quantified.

When we’re out and about with her and people discover that we’re her only local family, they always remark how lucky she is to have us nearby. That’s probably true; after all, we’re happy to shovel her walkway in the winter and we’re generally awesome people. But I’m always quick to point out that, really, we’re the lucky ones. It’s not everyone who has the ability to spend time with their grandmothers or great-grandmothers, and it’s exceptionally rare to spend time with one who is as good a sport as Phoofsy.

Just wait until we decide to take up skydiving. That will really be something.

3 thoughts on “A Sporting Chance”