We’ve had kind of funny weather at the lake recently – a bit windy, a bit choppy, a hint of rain here, a wickedly hot breeze there, a chilly wind over yonder. The threat of a severe thunderstorm kept the girls inside most of yesterday afternoon and evening, so by this morning, they were in rare (read: drive-you-insane) form.

In an attempt to curb their insanity (and preserve the rest of our sanity – or whatever little of it is left, anyway), I offered to take them for a boat ride. Ella, my most avid boater, immediately agreed, and although I couldn’t convince Annie to join us, my grandma, Phoofsy, decided to come along, too.

Upon hearing this, Ella was momentarily concerned. “But Mom – we won’t be able to go fast if Phoofsy comes with us!” I assured her that it would still be a lovely ride, and she conceded that it would be fun to have Phoof with us… especially if I took Ella out again for an even faster jaunt. After procuring life jackets and towels, we were ready to go. While hardly glassy-smooth, the water in front of our dock looked nicely suited for a simple, pleasant boat ride. Easy, peasy – let’s do this!

The clouds, on the other hand, did not appear so benevolent. One of the coolest parts of living on a large-ish lake is that its open expanse allows you to see myriad weather patterns coming and going – rolling up from the south, sailing over from the west, very occasionally creeping down from the north. Even cooler, the size of the lake (1.5 miles wide and 15.5 miles long) means that it’s entirely possible for multiple weather phenomena to occur simultaneously. Today, the northwestern portion of the lake was blanketed in clouds with the potential for rain, so I opted to take us southward, where it was perfectly sunny.

See: dark and stormy to the right (i.e. west); sunny with puffy clouds to the left (that’d be east).

As we made our way down the lake, it was, indeed, bright and shiny, but – for some inexplicable reason – choppy as all get-out. The peaceful landscape in front of our dock gave way to a roiling, jagged roller coaster of hell. One moment, we were bobbing happily along, all “Ooooh, what a beautiful summer morning!” and the next I was looking around for George Clooney and Mark Wahlberg to see if they, too, were struggling with their vessel.

It may not look like it here, but trust me, it was totally Perfect Storm-esque.

I’ve been boating on the lake more times than I can count, and I am not exaggerating when I say that these were the roughest waves I’ve ever encountered. Ocean-like, they were taller than the boat, cresting with white, frothy peaks and dipping crazy low to draw up steam again. Ella hung on, white-knuckled, for dear life and Phoofsy (someone who is most definitely not a stranger to going out in the boat) sat, stern-faced, determined to – quite literally – ride things out as we flew up into the air and then plummeted down into the trough, water spraying at us from all sides. There seemed to be no speed at which the ride was any less formidable; too slow and we thrashed about like ping-pong balls. Too fast and we risked breaking our teeth from all of the machine gun-esque chattering.

Is it legal to send out the SOS signal because you’re worried that you might break your coccyx? What about your grandma’s coccyx? Should I stop mentioning coccyxes?

For as good a sport as she is, I knew that Phoofsy was hardly enjoying the brutal pounding we were taking, and it hadn’t really been my intention to torture her on our easy peasy ride, so I finally cried “uncle” and turned the boat around. (I might have said something other than “uncle” but thankfully it was too windy for Ella to hear me.) As we bounced our way north, the waves began to ease up a little, and I was thankful that the storm clouds remained mostly to our west. 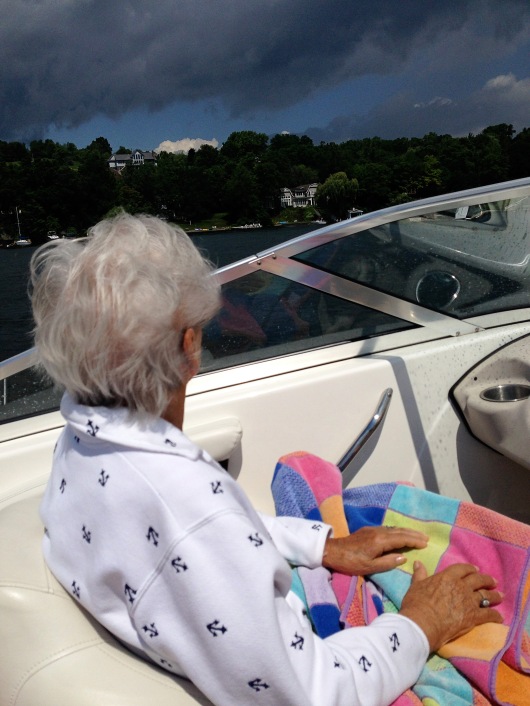 Yep, just off to our left… there they are…

Things had just settled into a rhythm that didn’t make all of us feel as though we were rumbling over a rock quarry, and I had finally breathed a sigh of relief that, at last, this ride was taking a turn away from water boarding and toward relaxation… when it began to rain. Turns out that the clouds “just a bit to the west” were a little more “east” than I’d thought and, despite my attempts to outrun (outboat?) the droplets – despite the fact that it was STILL SUNNY – it was hopeless. 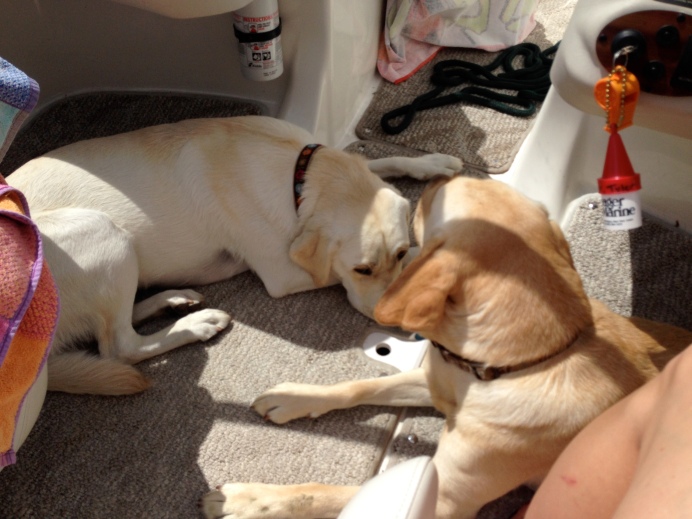 By this time, even the CCI pups we’d brought along were like, ENOUGH.

Thankfully, the rain was not particularly strong, so none of us got soaked, but the message was clear: Nice try. Go home. With a sigh of defeat, I turned the boat back to the house, barely managing to ease it back into the hoist without doing any damage. Naturally, by now it had stopped raining, and the water surrounding our dock was as calm as it had been before we began our accursed journey. Rather than tempt fate, Phoofsy ambled out of the boat (“ambled” is generous, but hey, if you can climb out of a boat, perch on the edge of the hoist, and then traipse over a handmade, unsteady wooden bridge to the dock when you’re 94, I get to use the word “ambled”) and called it a day.

Ella, on the other hand, was bound and determined to take me up on my promise of a more raucous ride, so we lowered the hoist and motored back out into the open water… where Ella immediately refused to allow me to increase the speed any faster than we’d gone during our first ride. Without a hint of irony, she looked me right in the eye and said, “I’m fine with going slow, thanks. I’m so glad Phoofsy was with us the last time or else we might really have had trouble in those waves.”

Given that the weather patterns have been changing so rapidly you could get whiplash trying to keep up, it was no surprise that the water that had been filled with white-capped breakers fifteen minutes earlier was now barely rolling. Our ride was as easy peasy as I’d hoped the first one would be as we took the boat across the lake and nearly all the way down to the south end, then back up and home again. Ella’s hair billowed behind her as she sat up front, arms outstretched horizontally as she “conducted” the air each time we crossed another boat’s wake.

As we approached the shore once more, I joked that she’d better brace herself because, as we all know, docking is not my specialty. She obliged and then waited for me to turn the dial and raise the hoist (and the boat) out of the water, but as I did so, nothing happened. The metal coil refused to budge, wouldn’t even make a sound, as the boat bobbed along beside the dock and we waited… and waited… for the motor to engage…

And then our neighbor called over from their beach to me to ask if our power was out, too, because theirs was – and wasn’t this just the strangest weather we’d been having?

Before I cursed her, I did thank Mother Nature for at least allowing my grandmother to get out of the boat earlier when the power was on, because without a functioning hoist, Ella and I were now floating a good three feet lower than the dock, and ain’t no way Phoofsy could have “ambled” her way out of this one. Unable to park the boat as usual, I realized I’d have to back it up and tie it to the dock cleats – while not banging it up against the posts and also while locating and attaching the bumper buoys – which is super fun if merely docking the boat is a significant challenge.

Well, it took me at least ten minutes (several of which were spent pulling the boat back in line with the dock after Ella realized that I’d attached the wrong end of the rope to the cleat and the rear of the boat had come unmoored – oopsies!), but by God, y’all, I attached it and set out the bumpers and managed to clamber up and onto the dock. Ella, of course, was already a good many yards ahead of me, having breezily climbed out of the boat and skipped her way up the beach without a care in the world.

“Mom? Once we have the power back and get the boat up, can we lower it again tomorrow and go for another ride with Phoofsy?”

Sure, kid. I’m sure she’d love that. Easy peasy.