This whole Writing About Our Trip To Puerto Rico thing has me kind of stumped. On the one hand, I want to tell you about everything – all of it – in detail, both because it was wonderful enough to document it and also because maybe I’ll convince you to go – and oh, you should. It’s fabulous.

On the other hand, this isn’t really a travelogue kind of blog, and frankly, reading blow-by-blow accounts of peoples’ travels can get a bit tedious, even if you’re a read-about-travels kind of person.

I’ve been pondering this conundrum for the past few days, this contrast between two approaches – and, after going through my photos today, it finally struck me that it is precisely this contradiction that I want to write about. (Not my own personal narrative, but rather the island as a whole.)

The entire time we were in Puerto Rico, Nick and I marveled at how fascinating it was – the disparity between new and old, modern and antique, Puerto Rican and American, sleek and rundown.

We got off the plane and were immediately bowled over by the heat; I’ve been in some damn hot places, but Puerto Rico was a different kind of all-encompassing, steamy, can’t-escape-if-you-tried, walk-for-five-minutes-and-your-shirt’s-soaked-through hot. But it was also tropical and somehow fresh and reminded you that you weren’t in Kansas anymore, Toto, but that you’d spun your house and landed in a (muggy) little slice of paradise.

As we exited the main terminal to pick up the rental car, we expected to see “traditional” Puerto Rican scenes and sights and buildings… 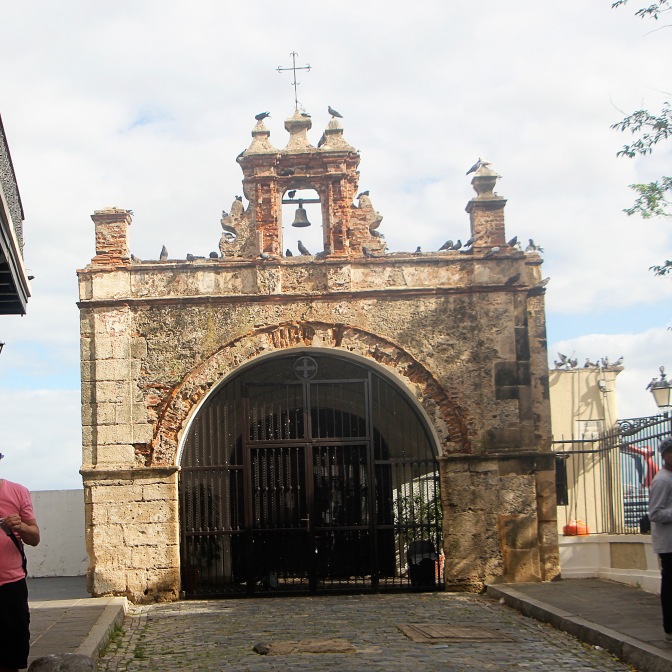 I’m embarrassed to admit that I’m not sure what this is, but it’s in Old San Juan and it’s over 400 years old and it’s really, really cool.

… and were instead greeted by a Buffalo Wings restaurant.

If we’d wanted wings, we could’ve traveled 60 miles to Buffalo instead of 1800 to Puerto Rico. IRONY, my friends.

Actually, that was a pretty good introduction to the juxtapositions we’d be seeing throughout the rest of our vacation. When we got to Old San Juan, we found ourselves driving down narrow, blue-bricked streets with rainbow buildings…
(Note: you can click on any of these to make them larger; the horizontal ones are especially small on the blog and are more interesting up-close)

… but also past long-ago abandoned buildings…

… often just steps away from one another. 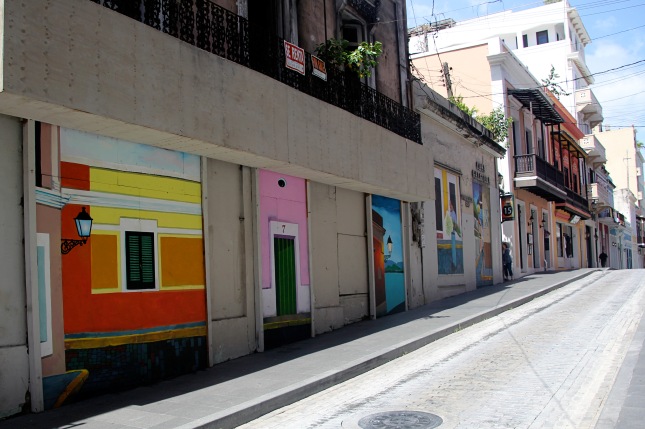 That’s not a potted plant – it’s a tree that’s grown out of the building.

Never before have I been in a place in the Western Hemisphere where the past and present mingle so cohesively – where orange cars are parked outside of centuries-old forts. 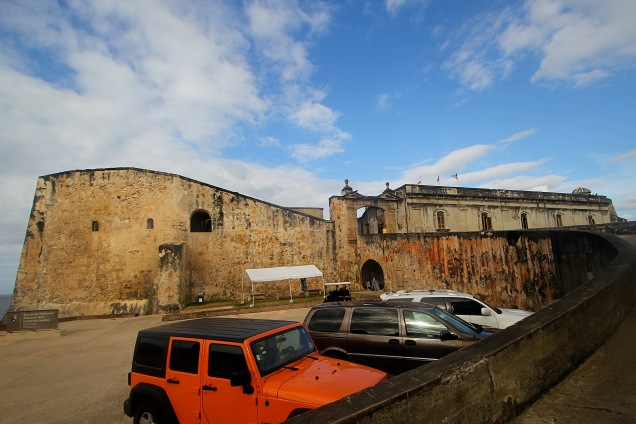 The Castillo de San Cristóbal was one of the most magnificent creations I’ve had the privilege to visit, perched high atop the hillside, nobly guarding Old San Juan…

… and the cruise ships and hotels just beyond its imposing fortress walls.

Looking back out at the fort from our balcony – when I wasn’t busy terrifying other hotel guests – was pretty freakin’ rad.

Out some of the castillo‘s windows, the view of the city was so warmly old-meets-new inviting, we might as well have been in Tuscany.

(Or what I imagine Tuscany is like, having never been there. Work with me, y’all.) 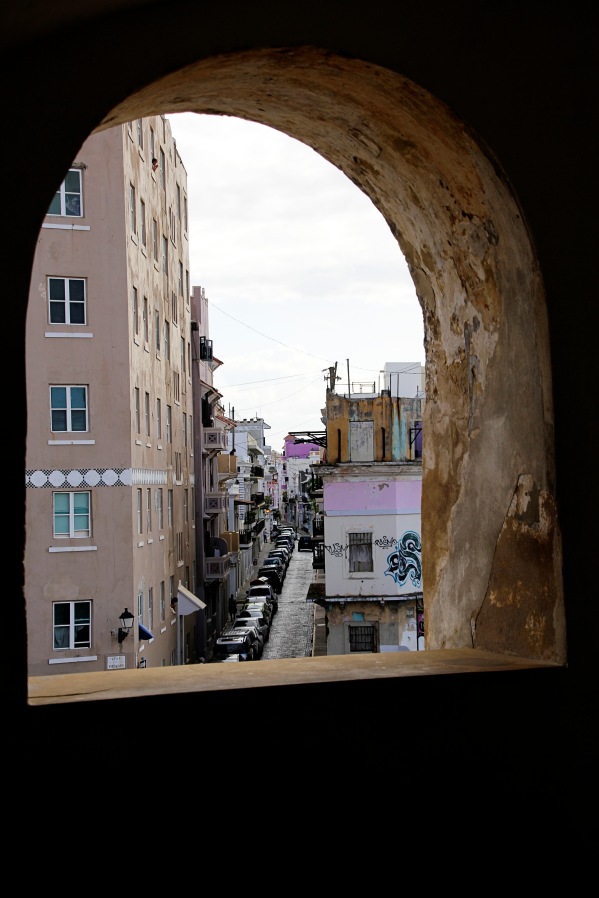 … but, upon closer inspection, showed how the city is courting growth and decay simultaneously.

The fort itself, like so much of Old San Juan, was insanely windy, which provided its own interesting dichotomy: crazy hot meets constant breeze = hotter than hades but also sometimes not hot.

At times while walking around the property, I thought I might actually melt into a puddle, Wicked Witch of the West style – but inside this gun turret (last used in World War II, how awesome is that), it was so dark and breezy, I was positively refreshed.

Old San Juan proved to be an absolutely delightful city; we could easily have stayed there for the duration of our visit and been perfectly content. It is entirely walkable (although the hills are no joke; San Francisco is mildly bumpy compared to OSJ), taking you along those aforementioned blue-brick-lined streets and past shops, restaurants, memorials, historic sites, crumbling city walls, gleaming new buildings, tourist traps, and residential apartments. The diversity was both startling and fascinating.

One street was lined with gorgeous, enormous, well-tended planters in which lovely tropical flowers and plants were flourishing…

… while another was so poorly maintained, with peeling paint off the bars surrounding the doorways, that I didn’t even realize the building was occupied until I spied the soccer ball on the stairs inside…

… while this one left no doubt that prosperity had long ago come and gone, despite the beautifully hopeful mural painted on the wall.

Sometimes, we found ourselves so deeply within the confines of the city, winding down tiny side streets and in and out of shops, that we could only assume that the ocean was nearby. Others, we stood right alongside the shoreline, palm trees and tile-roofed buildings meeting with blue-green water.

Similarly, these houses had completely unobstructed views of the ocean, a location that would make beach lovers green with envy…

… until you noticed that they were falling apart, hole-y roofed, barely standing. It was sobering and curious and somehow lovely all at the same time.

This curious contrast was not only present economically in Old San Juan, but in virtually every other aspect of Puerto Rico (that we noticed, anyway. After 3.5 days there. We’re probably experts). Wide, inviting, breathtaking beaches were everywhere we turned, with water warm enough to fill a bathtub. 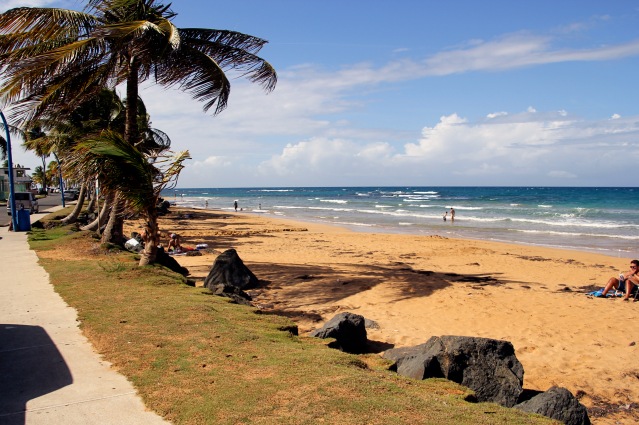 Naturally, we stopped to enjoy the surf… but, paradoxically, also checked out the only skating rink in all of the Caribbean.

Driving around Puerto Rico was an adventure in diversity in and of itself. The streets in Old San Juan are relatively clearly denoted, once you know where to look for the street names…

… but all of the other roadways throughout the island were essentially unmarked, making for some rather difficult traversing (which might have tested our togetherness just a wee bit more than we’d intended, but whatever. We made it). We went ziplining in the rainforest at a place that was completely contemporary, safe, and wildly fun…

… but was accessible only by a potholed “road” that was technically two-lane but – like many Puerto Rican roads – was really barely wide enough for one car, ending at a collection of dilapidated, candy-colored buildings that apparently once belonged to the YMCA. It was otherworldly (and completely awesome).

One evening, we were fortunate enough to happen upon a performance by a local music/dance group that showcased some native Taino songs and dances. They whirled and sang songs that were hundreds of years old…

… while wearing store-bought clothing and – if you were three years old – sparkle shoes.

Throughout our trip, we saw animals everywhere, from dogs looking at us out second-story windows in updated, crisp-clean city apartments…

… to wild chickens wandering aimlessly in and out of the driveways of barely-still-standing rural homes. 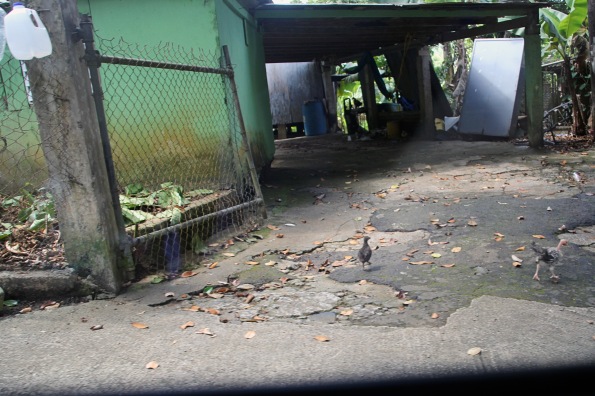 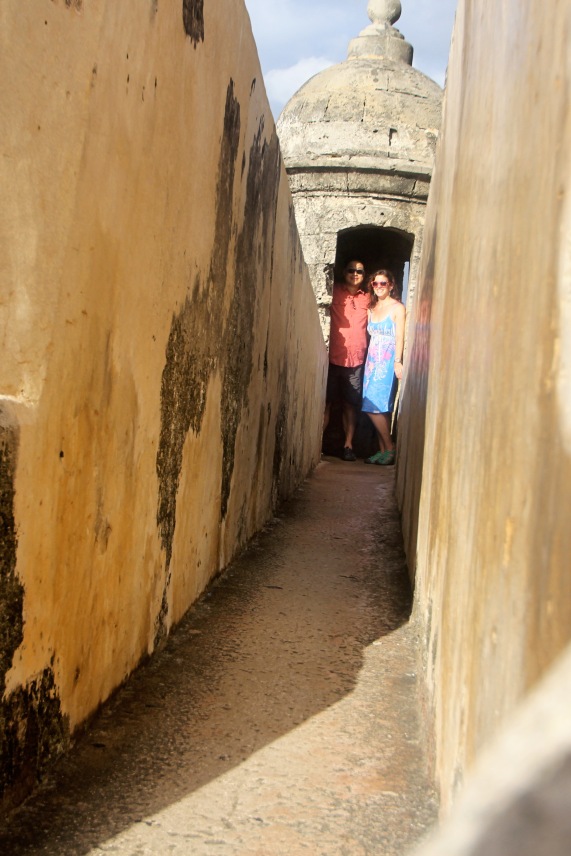 … but we also ate dinner at the most state-of-the art, ultra-modern (ABSURDLY DELICIOUS) restaurants imaginable. 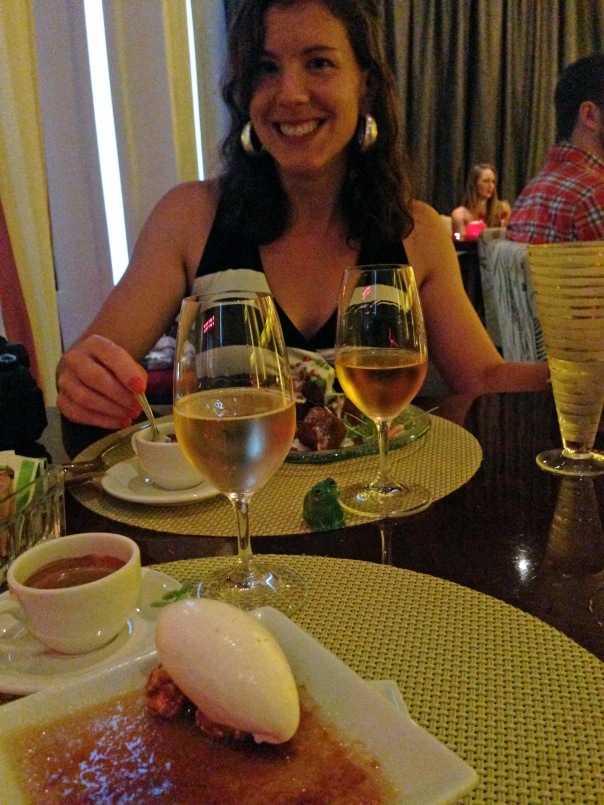 I’ve considered doing an entire entry just on this one meal, but I’ll never do it justice. Also, you’d be bored. And hungry. Suffice it to say it was magnificent.
This is dessert, which means espresso for us both, caramel corn creme brûlée with peanut brittle ice cream and Sparkling Frangelico for Nick and gluten-free organic carrot cake with some kind of ginger-flavored sorbet, plus a white wine from Hungary.
SOSOSOSOGOOD.

The juxtapositions weren’t unsettling, but they definitely made us realize we were in for more than just a simple vacation on a tropical island. There was a wonderful thread of cultural heritage that was woven into every city and location, but there was evidence of attempted growth all around us. Traditional Latin music blasted through car speakers as motorists navigated congested highways and itty bitty side streets with equal parts daring and insanity. English and Spanish were spoken almost interchangeably, a nod to their roots in Spain and their current status as a United States territory. Everyone we encountered was exceedingly friendly, but, strikingly, there were still bars on every window and door, from the cities to the suburbs.

Note the dog peeking out from the second story of this home, too.

Even the weather was inconsistent – sunny one moment, downpours the next, and then instantly sunny again. As we stopped for lunch in a beachfront restaurant along the western coast, we happened to notice a storm rolling in from the north. It’s not every day that you get to see a storm glide in across the ocean and swallow you up. 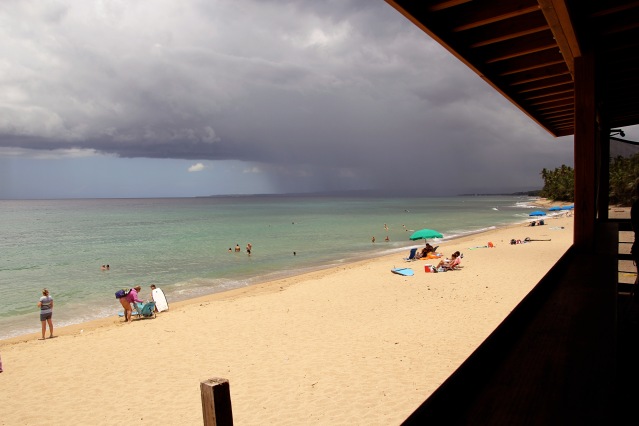 Our favorite, most incredible part of the visit – a kayak tour to a bioluminescent bay – couldn’t be documented, because it was pitch black and also glowing microorganisms don’t show up so well in iPhone videos (lame). It capped off a perfect day that we knew would be unbeatable; and indeed it was, with the following day being overwhelmingly disappointing as we got stuck in horrible, unpredictable traffic for seven hours (yes, really) and wound up missing out on the things we’d hoped to do and see. But that night, we ate the best meal of our lives (see above), and all was forgotten – contrasting experiences that bumped right into one another, ultimately creating something amazing.

And, in the end, that’s how we felt about Puerto Rico: that it was spectacular. Inconsistent, yes. Confusing, yes. Simultaneously beautiful and worn down, yes. Interesting, yes. Worth a return trip? Oh hell, yes.

Even before we’d left the island to make our way home, we were talking about going back and bringing the girls. It’s so accessible for us as Americans, both because it doesn’t require a passport and because the people and culture are so welcoming and affable. It felt familiar but foreign, expansive but contained, exciting but comfortable, relaxing but invigorating, crazy but chill. After 3.5 days, we felt like we’d really seen the island, but that there was still so much left to explore.

Which means that we’ll have to visit again.
Can’t wait!