Nick is going out of town again next week, which is always a little hard on the girls. He travels often enough that we can get into our own groove pretty easily, but they still miss him when he’s gone. One of the ways that Nick works to ease their sadness is to check in with them at least once a day, but more often twice – in the morning before school and at night before bed. He also tries to bring them back some sort of trinket or souvenir, which they can’t wait to get their hands on – even if it’s just a Washington D.C. pencil or a Welcome To Kansas City keychain.

When Nick and I went away to Puerto Rico, we knew that we’d be bringing back some kind of memento for Annie and Ella (in this case, little packages of cookies that we can’t find on the mainland and some cute seashell jewelry boxes that broke pretty much the moment we handed them over). In order to help us stay more connected to them while we were gone, we also knew that we’d be sending them photos of a figurine posing at many of our destinations.

Remember back in July when I’d mentioned this little guy and told you I’d explain more later? Well, it took me 6 weeks, but here I am.

It all began three years ago when Nick and I went to Jamaica for three days to celebrate our 10th wedding anniversary. This was the first time I’d been away from the girls for more than a night and, honestly, I struggled. It wasn’t that Jamaica’s gorgeous beaches didn’t hold my attention or that my fabulous husband wasn’t good company, and it certainly wasn’t that the “free” rum drinks at our all-inclusive weren’t delicious; I just plain missed the kids. I didn’t want them with us – oh, no – but it took me a good 36 hours to relax and stop aching when I thought about them. (Ironically, having become accustomed to being away from the kids more often than I, Nick was able to settle in immediately… but 36 hours later, he began to get antsy and homesick. So we kind of met in between – and, man, were those middle four hours amazing!)

Calling home wasn’t easy (and even if it had been, I was adamant that I at least try to pull away), but we were able to use the wifi in the resort to send a few communications back and forth each day with our babysitters. It was the promise of these connections that caused me to pick up this little fella and decide to make him a part of our trip:

We named him MoBay (after the local nickname for the Jamaican city of Montego Bay) and after texting our sitters a photo of him along with a caption – “Here’s MoBay the cat sitting by the pool!” (or something like that; it was three years ago, folks, so I’m exercising creative license) – we were told that Ella and Annie loved it, so we kept taking photos and sending them along once or twice a day. What began as a bit of whimsy wound up making the transition to Vacation/Enjoy Time With My Husband Mode much easier. I got a kick out of posing MoBay at various hotspots, knowing that the girls would be tickled and, even better, the hot sting of missing them began to dull as soon as I’d taken the photos. Win/win!

We brought MoBay home with us – after all of the photos, it was like meeting a celebrity – and he was promptly gnawed to a little pink nub by one of the dogs, ending his illustrious career… But the memories (and out-of-focus cell-phone photos) remain.

Nick and I knew that, this trip, we would do the same – and so as soon as we left the hotel and began to explore Old San Juan, Nick hightailed it to a gift shop and returned with an itty bitty, glum-looking ceramic frog that we named Coqui (ko-KEY) after the native Puerto Rican amphibian. 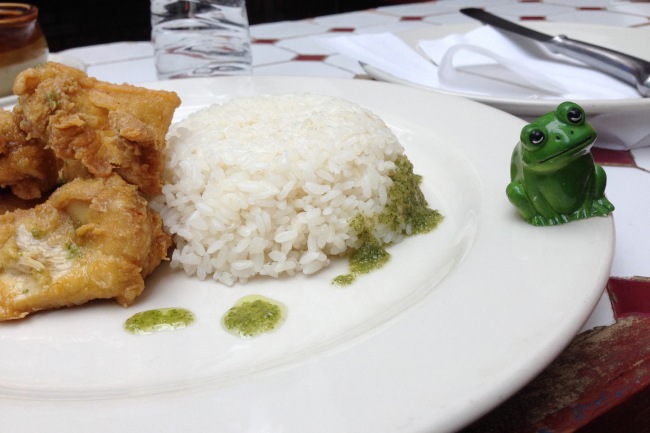 We were starving, so Coqui’s first photo was beside food.

Our serious-faced green dude did, indeed, connect us to our girls, and I had a blast deciding where to take the pictures – but to my surprise I found that he didn’t ease the missing of them… because I didn’t really miss them. I thought of them, sure – a lot. But they were smile-inducing thoughts, never tinged with sadness. Whether that’s because they’re that much older, so I knew they’d be okay… or because I’m that much older, and I knew I’d be okay… or because we’ve had a little more practice being apart from one another… I’m not sure. But I do know that it was awfully damn fun hopping onto that airplane and being all, “LATER, DUDES!”

MIssing the girls or not, Nick and I loved placing Coqui in his photo spots. There were the obligatory This Is What We Ate Today pictures, of course…

Puerto Rico’s signature dish, mofongo. Deeeelishus.
Is that a plantain in your dinner or are you just happy to see me?

Fantabulous coffee at the delectable Caficultura.

Dessert following the best meal we’ve ever eaten, at Marmalade.

Coqui also joined us on all of our adventures, from ziplining…

Yes, I kept him in my pocket while we zipped.

… to the bioluminescent bay…

It was pitch black (sort of critical for this excursion) plus also we were in kayaks and I had this waterproof case-thingy over my phone, so this was the best I could do.

… to the incredible forts and Old San Juan sights.

If we did it, Coqui was with us. 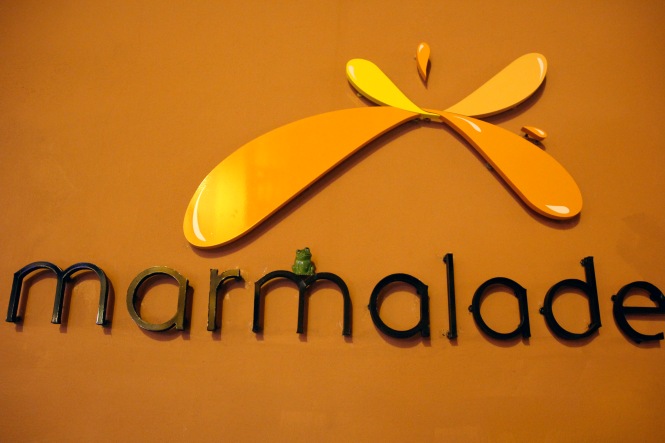 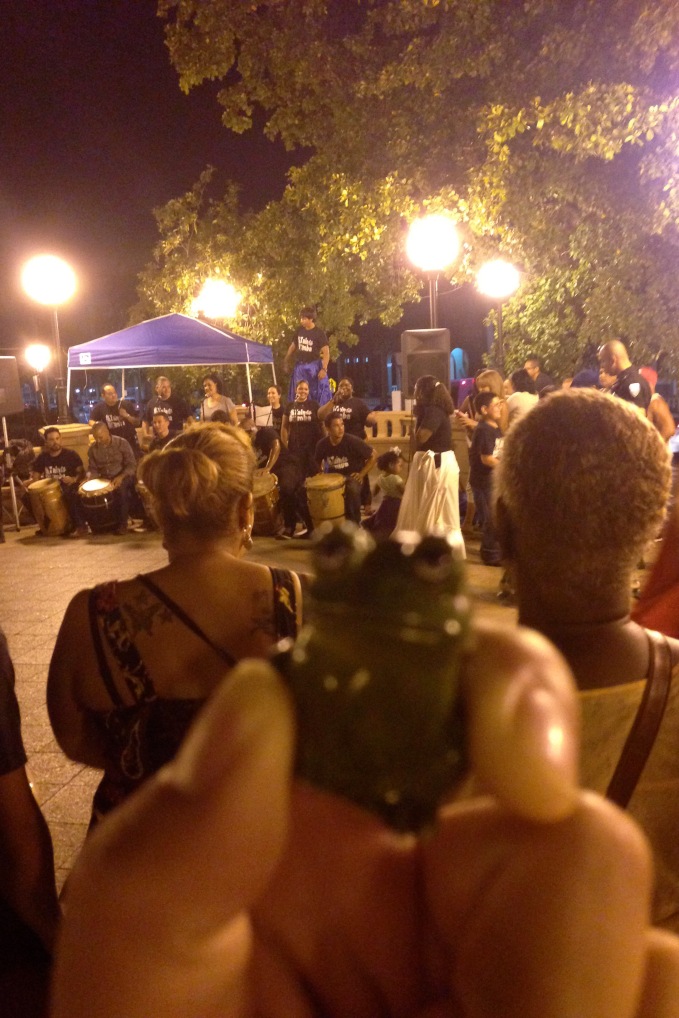 Taking in a little native culture. 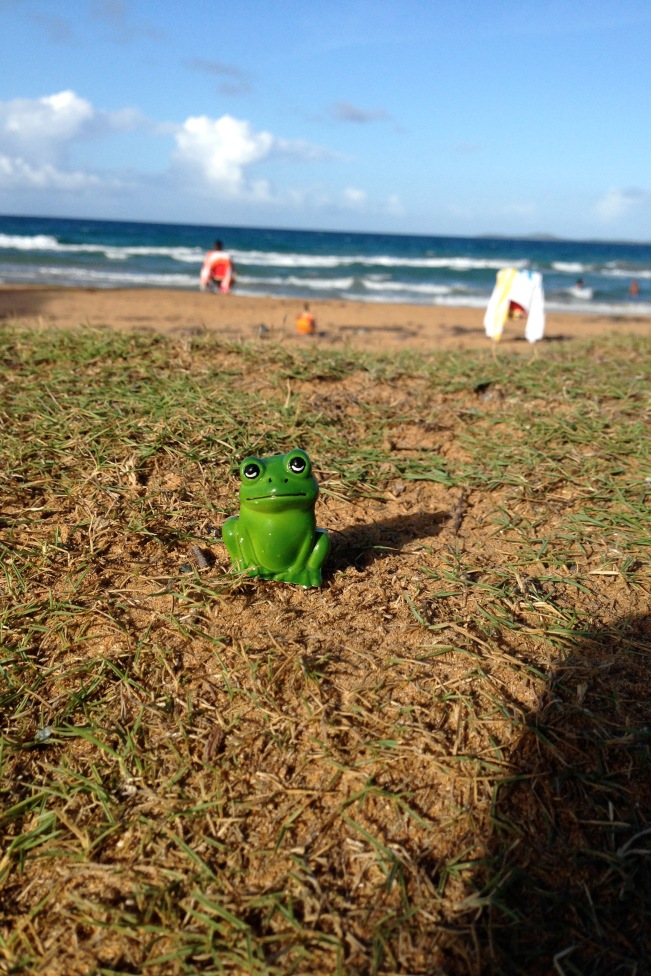 Chillaxing at the beach.

We knew that this trip would be good for us – getting away, spending time together, finding us among everything else that life throws our way – despite friends saying how difficult it would be for them to leave their own children. How could we do it? Wouldn’t we think about them constantly? Would we forbid all talk of the kids and focus solely on other things?

Ummm…. hell, no. If we did that, we’d have about five minutes’ worth of things to talk about; there’s only so much we can say about the situation in Ukraine and discussions about how much we’d love to redo the basement but can’t find the time/money usually end with at least one of us leaving the room. Okay, so this is an exaggeration (not about the basement but about not having anything besides the kids to discuss), but we absolutely talked about the girls; they pretty much dominated our conversations.

It was in a good way, though. When we visited the dungeon at the Castillo de San Cristobal, we remarked that the kids would love this place. As we walked the tiny streets of Old San Juan, we noted which stores the girls would have wanted to browse, but how grateful we were that they weren’t trudging around in the heat. We considered whether or not they would actually enjoy ziplining and if they were old and mature enough for the nighttime kayak adventure. We heaved sighs of relief that they didn’t join us on our epically failed coastal drive and clinked glasses blissfully noting that we were enjoying the best meal ever without small children who would not appreciate the food.

And, of course, there was Coqui and his photo series, which connected us with one another any time we wanted. Ella and Annie were everywhere – and, next time we visit Puerto Rico, we intend for them to actually come along – but that didn’t take anything away from our vacation. In many ways, talking about them as often as we did made it easier to unwind and relax because we weren’t trying so hard not to think about them. Coqui helped being apart be even more fun, in spite of his contemplative nature.

Because I hadn’t desperately missed the children, I expected that returning home to them wouldn’t be all that big of a deal – oh, look. We’re home. Here’s a seashell box that you can break. When Annie came running into our bedroom the morning we were back and threw her arms around me with a monstrous hug, however, my expectations took a backseat. When Ella then crept into the room – cautiously, so as not to wake us – and glimpsed me for the first time in four days, her face widened into a smile so broad, so deep, so joyful, I thought I might be knocked off my feet just by looking at it. To receive a smile like that from a kid who hand-holds but is not terribly effusive… well, that was just about the best part of the whole trip.

That is, until we introduced the girls to Rock Star Coqui… and this other colorful creature we’d found in one of the gift shops.

This little guy really gets around the Caribbean…

We’ve pretty much been granted their blessing to go away any time we’d like.

2 thoughts on “A Picture Is Worth A Thousand Cheesy Souvenirs”