A few days ago, Nick and I got back from a trip to Puerto Rico; it was amazing and fabulous and I would go there again in a heartbeat if only to eat at this one restaurant that served us a dinner I’m still salivating over.

There’s so much I could write about it, that I want to write about it, that it’s getting all squished together in my head (which doesn’t have much thinking space in it these days, anyway) and I can’t decide what should come next, so although I definitely plan to document it more in coming weeks, I will start with this one absurd story.

We stayed at this nice little Sheraton in Old San Juan right on the harbor in a lovely room with three itty bitty balconies – one of which, in the mornings and evenings, afforded us a rather industrial view… 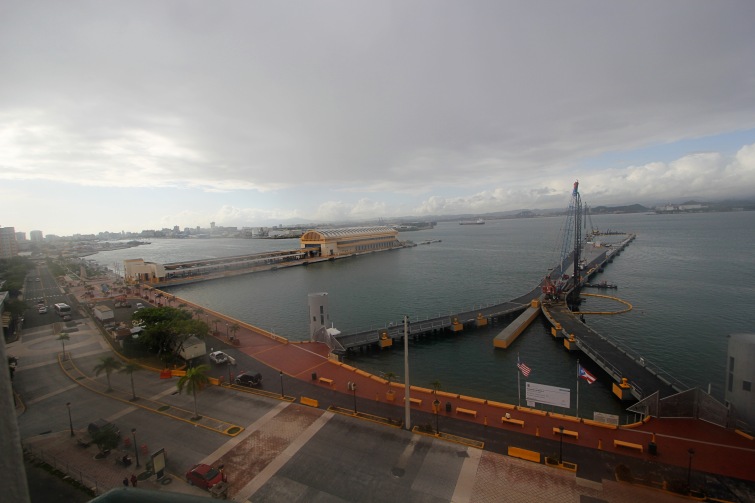 … and throughout the rest of the day overlooked the cruise ship docks. 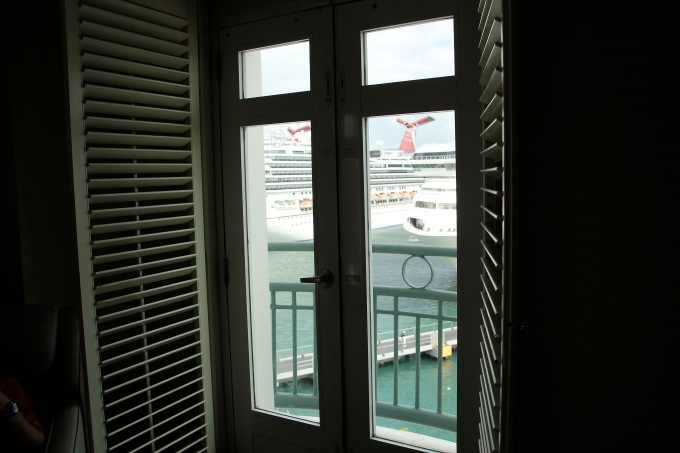 Although we did not spend a great deal of time in our room, on the last night of our vacation we found ourselves with a few minutes to spare before heading out to dinner. It had rained heavily, bringing in slightly cooler air (anything less than melt-your-face hot felt positively arctic), and so we opted to open up all three sets of French doors. I walked out onto the balcony overlooking the docks and took in the evening unfolding around me: the rainclouds rolling away, hints of sunlight dappling through and onto the buildings, the rolling hills in the distance, the tourists strolling the street below. 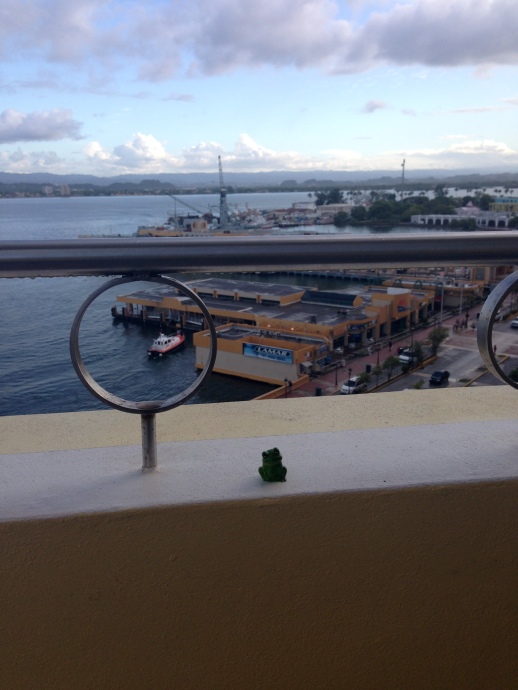 This was taken minutes before I stepped out onto our balcony – from the floor above ours, but it’s essentially the same view. Minus the frog. More on him later.

While taking in the scene, I looked to the right and happened to notice that there were no balconies on the floor below us, but that all of the lower floors contained them. I also happened to notice that there was a gentleman standing on one of said balconies – one room to the right, two floors down – and that he was also looking to the right, which meant that I was standing behind him. To my knowledge, he didn’t even know I was there.

Without warning, a gust of wind blew through (then again, “without warning” is a bit inaccurate, because Old San Juan is ridiculously windy) and I heard a BANG!! behind me that startled me so much, I jumped violently, all but throwing out my back. I also screamed like nobody’s business – that brief burst of fear that escapes you when you have the absolute shit scared out of you.

See, the wind had sent a draft through the open doors of our hotel room, causing the ones behind me to slam shut, thus scaring the pants off me. In addition to being terrified by the BAM! from behind, I whirled around to face the now-closed doors and then became concerned that they had locked and I was stuck on this teeny strip of a balcony with only a railing stopping me from plunging to my imminent death below. Also I was hungry, so things were dire.

Meanwhile, Nick had been in the room getting ready for dinner when he, too, felt the gust of wind, and then – so says he – registered three sounds: a loud bang, me shrieking, and then an unidentifiable “HUH!” immediately thereafter. Bump! Aaaahhh! Whoa! Rather than ponder the third sound’s origin, he (wisely) chose to come to my aid and open the door to let me back in, thereby saving me from plunging to my death.

Just as I was wondering if perhaps this was some very twisted plot by my husband to strand me out on a balcony during our 20th anniversary getaway (a perfectly reasonable explanation, naturally), the doors opened and Nick gestured for me to come inside, which I did posthaste. I then recounted the story, explaining how the slam of the doors had scared me poop-less, and how glad I was that he wasn’t trying to play some weird trick on me and had come to rescue me instead.

After catching my breath and being reassured that everything was okay, I remembered the man who’d also been standing out on his balcony and realized my yelp and subsequent disappearance into our room might have been a bit disconcerting. Shaking my head, I lamented, “I bet I scared the heck out of that other man out there.”

And that’s when Nick put two and two together and realized that the third sound he’d heard – the “HOAH!” – came from the man on the balcony below, who had, indeed, been completely startled by my escapade. So startled, in fact, that he, too, had yelled out – so loudly, Nick had heard him from inside our room.

We then began to imagine this poor guy, stepping out onto his balcony… on vacation, likely, wanting to check out the view after the rain. He was there, relaxing – maybe for the first time all day, having traveled God knows how far to get to this little corner of paradise; maybe this was his first-ever vacation; maybe he’d always dreamed of spending the sunset on a balcony in Old San Juan – taking in the first hints of twilight, looking out over the utterly peaceful, calm scene unfolding before him…

… when CRACK!!! something slams to his left and “AAAAAHHHHHH!!” a woman screams, scaring the ever-loving crap out of him, which causes him to scream, too, like an unsuspecting guest being pranked on Ellen. He undoubtedly turned toward the source of the sound – to me whirling around in terror on my balcony, practically clawing at the doors to be let back inside – and then witnessed me magically being pulled through said doors (which were then shut behind me), never to be seen again.

Little ruins a tranquil twilight balcony moment like a fellow hotel guest shrieking and then being kidnaped. Worst. Vacation. Ever.

The more we pondered how my antics had obviously stunned the poor man, the more absolutely hilarious the entire farce became. We basically didn’t stop laughing for thirty minutes straight, until our sides hurt and we were gasping for air, and we essentially forbid one another from mentioning it again, lest we lose it during dinner.

That didn’t work, of course, because one of us would begin giggling – just the tiniest of bits – and then the other would see, and then it was all downhill from there. We laughed thinking about it the following morning .We laughed on the plane. We laughed during our layover. We laughed when we told the girls about it the day of our return. We’re still laughing about it now.

So, to the man I surprised and stunned on the balcony of the Sheraton Old San Juan: I apologize. Given the gale-force winds that whooshed along the streets all day and night, you’d think I might have anticipated the doors slamming, but I did not. I assure you that I was just fine – my husband was not up to anything nefarious, no matter how it seemed – and the rest of our night went on as scheduled. Except for the laughing fits. Those were not originally planned. 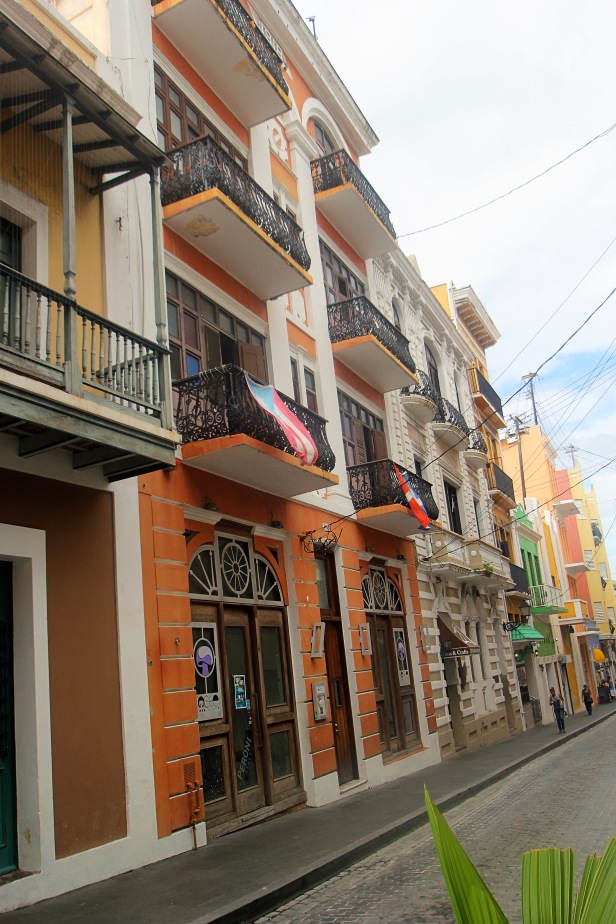 This photo has absolutely nothing to do with my story, but Old San Juan sure is perty.

8 thoughts on “The island of enchantment… and laughter”